I don't know about you, but sometimes I wonder if a wargamer can know too much about the wars he seeks to fight over with his models and toys. Fictitious 'Imagi-Nations' have this attraction: the war can develop how you please, and you can limit the theatres of war as you please. For me, a 'fictitious' ACW comes hard, unless you are prepared to go down the Fire & Fury or Volley & Bayonet track.

That approach has its points, sure, but one feels that such armies lack character; units lack that identity that engages the wargamer, and allows for regimental histories to be built up. I think the reason that my ACW armies have seen little action for the last 15 years lies somewhere in what I've just discussed.

That doesn't mean the situation is insoluble. I have one or two ideas that I will revisit later on. How many know of the attempt of the Confederated States of Amazonia's to secede from the Union of the States of Anaconda?

At any rate, here are some better pics of the troops displayed in my last posting: 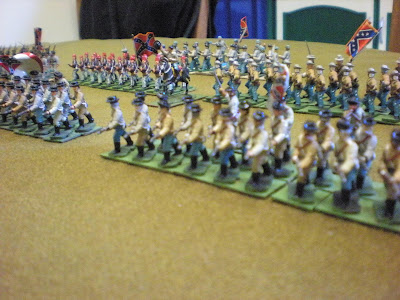 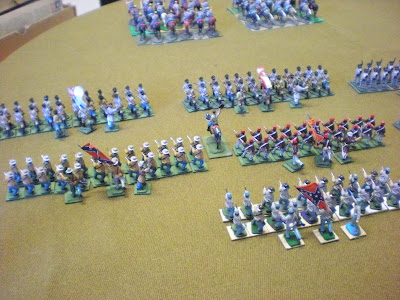 Front and rear views of Cognac's Brigade. With the 3rd Ark and 11th Tx in the front line I tried the look of different shades of grey and 'butternut'. The flags were late versions with the Beauregard design in a canton, with a white field. 11th Tx has the red stripe in the fly.

Had I known more about the Louisiana Tigers, they would have retained their hats, painted straw coloured, with a broad red head-band. The fezzes were pretty shapeless anyway, but carving them proved pretty crude. The paint up OK though. The flags of the Louisiana units are the Army of Northern Virginia pattern, hand drawn on paper and coloured with felt tip pen. 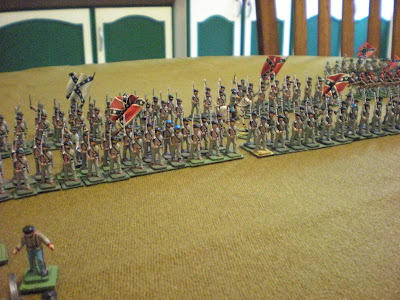 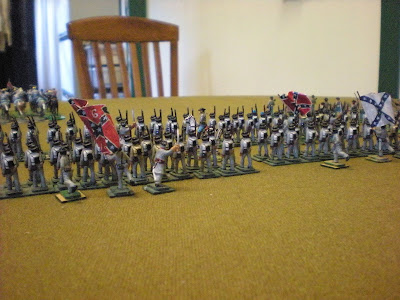 This Brigade will probably get a touch-up with trousers being painted blue, and maybe a unit having red blankets. The flags were all painted on tin-foil or milk bottle tops. Those of the leading units were some of my earliest efforts of the 1970s; the others a few years later (c.1981) after my technique had improved a bit. I liked the very dark blue of the saltire. The flag of 13th Alabama with a pattern occasionally seen, without the red field. Just for a change. 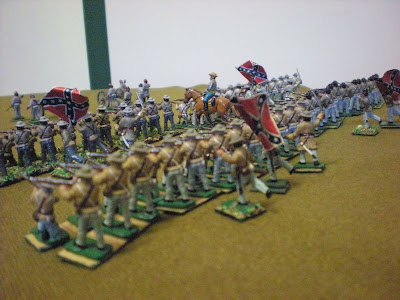 Experimented with colour variations between units. I particularly liked the pale 'butternut/grey' colour of the right flank unit (5th Ga), made from Humbrol Sky Blue and Afrika Korps Desert Yellow. Flags hand painted on tin-foil. At over 25 years old, they are starting to look a little tired... Pity: I was very proud of them. Incidentally, I like my flags overscale... 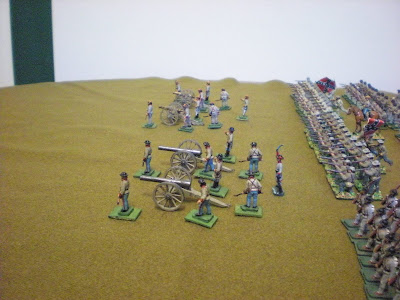 Baton Rouge (Louisiana) Artillery (12pr Napoleons) and Montgomery (Alabama) Artillery (20pr Parrott rifles) deployed in front of Allwright's Brigade. I named all my Artillery batteries after State capitals or other prominent cities. The Parrotts were painted with a mix of gloss black and silver, giving a burnished metal effect. It requires no highlighting or outlining, so effective it is. I use the same mix for musket barrels and swords (and armour, in other armies).
Here is a closer view of the Montgomery battery: 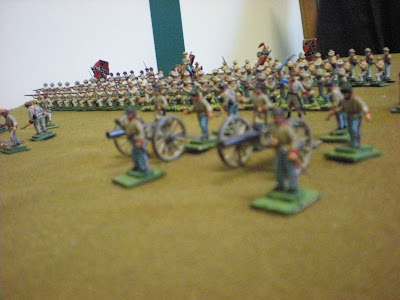 The camera preferred to focus on the Floridans and Georgians in the background, for some reason...
Baton Rouge Artillery: 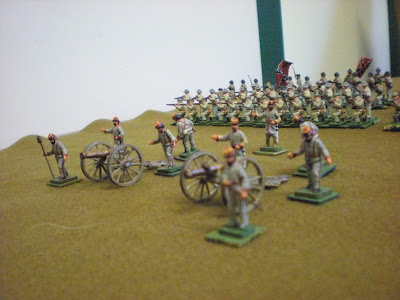 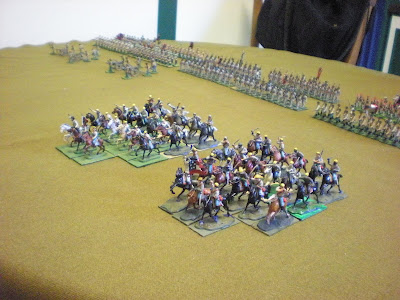 A lot of work required here as my whole CSA Cavalry are undergoing a reorganisation into 23-figure regiments (Somehow each unit displayed here has 21 - the final units will have 5 Squadrons of 4). All these are Airfix, except for the command group and front rank of the right flank regiment, which are Atlantic. 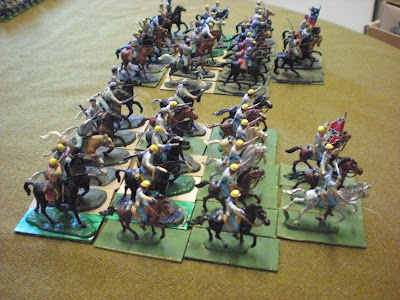 The 2nd and 3rd man in the 2nd rank were one-time guidon bearers, now armed with pistols. These were made from the head and about 3 mm of the shank of shirt pins. Glued to the top of the fist, the effect isn't too bad...

Yep: plenty to play with already. Of course, the slightler smaller IInd Division of Major-General Whitbread Grogpickle (10 regiments) - not to mention Cammell's other two regiments, dismounted cavalry and more artillery - will form an article for another day...
Posted by Archduke Piccolo at 3:39 PM