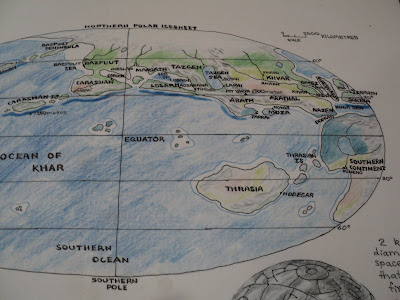 'Following amphibious invasions & the pincer-like moves by combined Omez/Raesharn in the north ... Kiivar [troops] were driven back from the densely populated lowlands towards their capital& the great Kiivar River. The capital suffered prolonged & heavy bombing attacks from the Raesharn airforce. 300,000 Tazgen 'volunteer' troops came to the front to bolster the battered Kiivan infantry and armoured forces. The Kiivar forces had already lost 70% of their armour in the bitter bloody battles of [66940AA]. ...'

It must be some ten or eleven or so weeks back that this dude turns up one Sunday at the Woolston Club with a fascinating story to tell. He had constructed an imaginary world, Sideon IV (Sy'-de-on Four), with a history (the AA in the date indicates 'After Arrival') of imperial wars. In particular, he was beginning to think of building up toy soldier forces for a global war that begins 66,940 years after humans arrived upon this planet. Technology is similar to, but not precisely the same as, human technology of this world in 1940.

I was hooked pretty much at once. Jono (Johnno), as he called himself, had built up quite a comprehensive military world, with maps, descriptions of the armies, navies and airforces of the belligerents, including technical data of their equipments. Having compiled folders of history and technical data, he seemed to me to have a solid basis for a wargames campaign - and not just a campaign, but a full scale war. 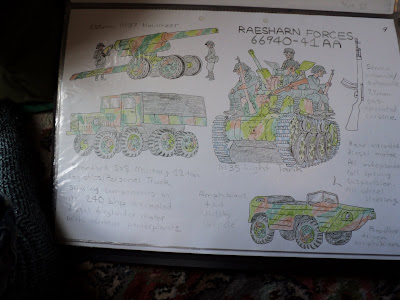 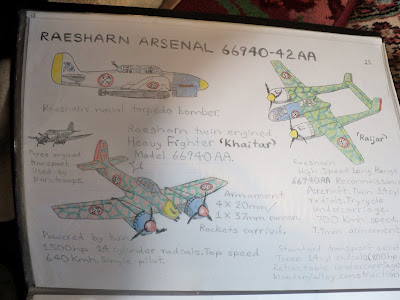 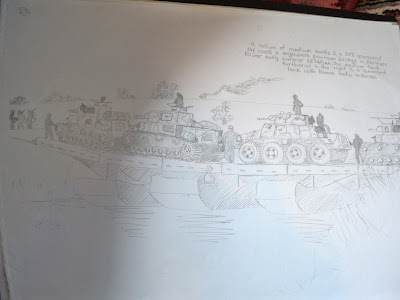 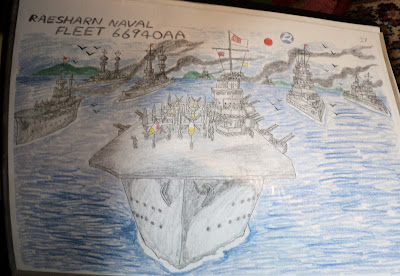 ... and these are just the Raesharn armed forces - and there's much more on them as well.

At any rate, Jono and I are both building small Kiivar and Raesharn forces with 'El Cheapo' plastic soldiers and toys, and modified models. I agreed to work up a quick-play rule set, basing my ideas roughly on Panzer Marsch, but with a much simplified combat system. The first draft was tried out last Sunday.

The scenario was a 'front line adjustment' during the winter of 66941, after the Raesharn sweep though the Kiivar littoral finally ground to a halt agonizingly close to the Kiivar capital, and its road and rail links to the north. 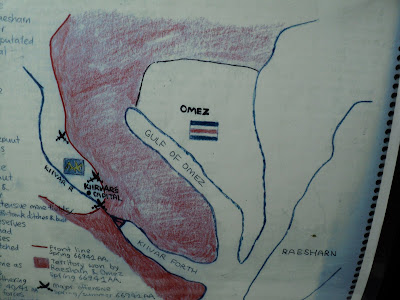 Lying in No Man's Land parallel to the front lines, was a road both sides desired as an aid to lateral communications for the quick transfer of reserves and reinforcements from one flank to another. Committing 6 infantry platoons, a squadron of medium tanks supported by a half-platoon of assault engineers, the whole backed up by a light Anti-tank gun and a scratch half-battery of artillery, the Kiivan had the slight edge in strength, the Raesharn lacking artillery other than a field modified heavy assault gun.

The Raesharn left flank, advancing tentatively towards the Kiivan right centre. It is not apparent from several of this pictures, but the overall grey of the Raesharn uniform is broken up by green and tan patches for a camouflage effect. 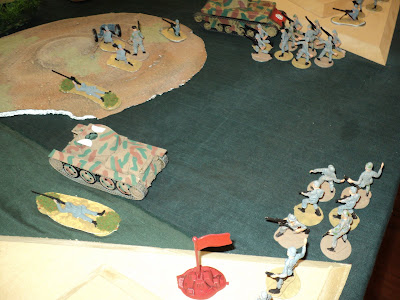 Raesharn right, a medium tank advancing towards an abandoned hamlet, with infantry that includes a light-machine-gun section. The 'camouflage' uniform colours are more apparent, here. 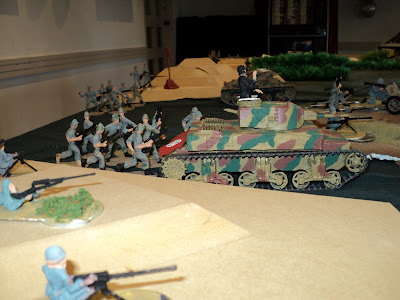 Close by the hamlet, a composite squadron of Kiivar tanks - two gun tanks, and a close-support tank. The red balaclava hatted guys belong to the half-platoon of assault engineers. For this 'play test' they were treated as ordinary PBI. Jono assembled and painted all the AFVs and the single AT gun possessed by each side in this game. He also painted the Raesharn infantry; I painted my own Kiivar foot. 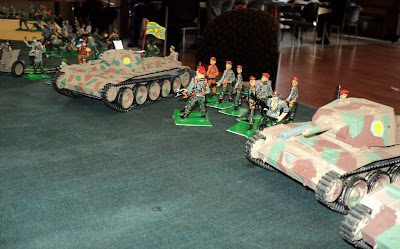 The Kiivar artillery, their FO standing on the distant ridge. Obviously the Kiivar have been through the mill, this half-battery cobbled together from a modern 10.5 cm howitzer and a 3-inch field piece of unknown provenance and antiquity. The Raesharn M35 assault gun eventually silenced the larger piece (knocking over half its crew), but the Kiivar artillery caused considerable losses among the Raesharn infantry. 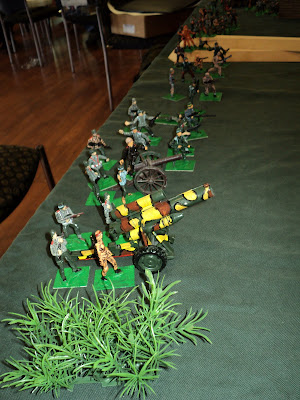 For this rule set, I invented a device for use with artillery. Here it is in action. One of the square's diagonals represents the line of fire; the area the beaten zone; the centre the point of aim. The point of aim is adjusted by the roll of a pair of differently coloured dice. The thing is turned over for direct fire, with more accuracy, and special 'on target' rules. The idea still needs some tweaking... 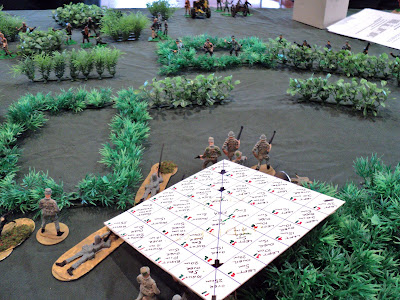 Altogether, I can see a very promising campaign in prospect...
Posted by Archduke Piccolo at 4:26 PM 7 comments: Links to this post 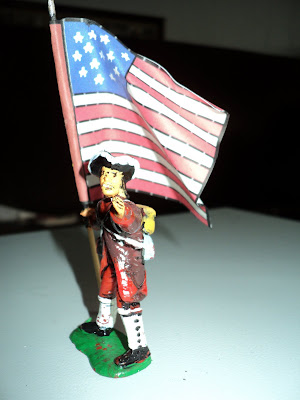 Recently a friend, having come into a job lot of wargaming stuff, flicked onto me a few BMC Yorktown figures he found therein to add to my small forces. More Amercans and Hessians - I mean British Grenadiers - about 10 foot figures of each, but including two or three new figure poses I didn't already have. A couple of gunners, and some poor beggar taking an incoming round. But I got another mounted and a couple of foot officers which got painted up as the reverse of the first lot. At any rate, here are some pics of the boys... 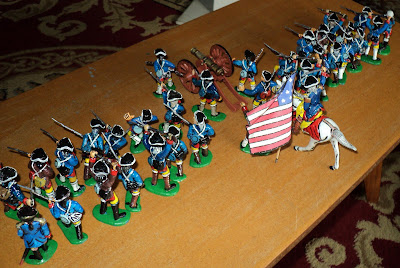 One NCO figure supposed to be aiming a pistol in his left hand and holding a sword in his right was missing his pistol hand and the sword blade. Some surgery on the latter to carve away the hand guard and accommodate a length of wooden rod, and a manual transplant on the other arm gave me a very nice flag bearer. From several angles his pose is dramatic indeed. Unfortunately I have only one other similar figure, which I am reluctant to treat in similar fashion for a British flag bearer. I think one of the American NCO figures (different pose) will have to turn his coat in order to provide at least one bearer (no: Maledict Ranold is another character that will no doubt emerge later on...). Whence comes to that, should he display the King's or the Regimental colour? Tough call... 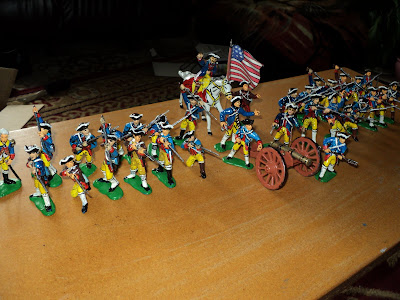 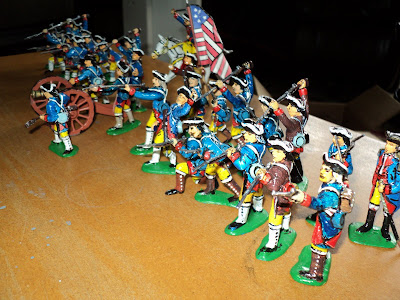 Unfortunately, the freeby didn't extend to another cannon, mortar or gun emplacement. Never mind. We did get another mounted commander, and now have quite a few officer characters to whom we may attach a name. On the American side: Horatio Styles, George Mashington, Nathaniel Greenyham (or should it be Nathaniel Veridian?); on the Brit: Lord Whye, Genl Portcullis, and Banastre 'Bally' Mirleton. 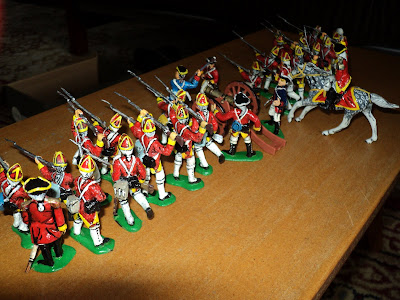 Portcullis rides a dappled grey horse. To be sure it looks a bit like a fairground mount - one you'd find on a carousel - but I rather like the look of him. A fine steed indeed. 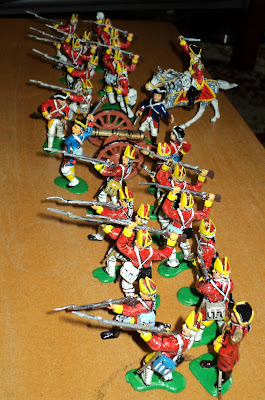 A couple of scenarios using the OMOG concept will be published shortly on this blogspot.
(To be continued)
Posted by Archduke Piccolo at 6:16 PM 3 comments: Links to this post