ACW Riverine - Under Construction... (Part I) 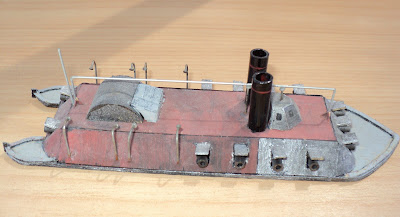 Once you get into a war period, you start to get interested in combined operations. The American Civil War is one that leads itself in my view very well to this kind of thing. The project I began (apart from one Union ironclad I built more than 10 years previous)some 16 or 18 years ago, making enough progress that several brown water naval actions were fought, and an interesting river and shore action tried out.

A friend having noticed one of my vessels, newly exhumed from the drawer in which it had sat for well over a decade and awaiting attention, I bethought myself to take a few pics of several of these craft. To begin, a 'Cairo' Class Union ironclad a picture of which heads this posting. Here are several more angles... 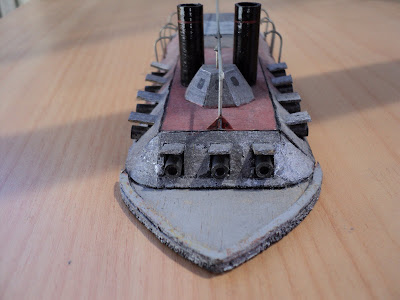 All these vessels were scratchbuilt from balsa, cardboard, ball-pen ink reservoirs, wire and any other likely-looking bits and pieces. Much of the paintwork was from my daughter's rather depleted water colours, with the armour and guns being painted with my favorite gloss black and silver mix. 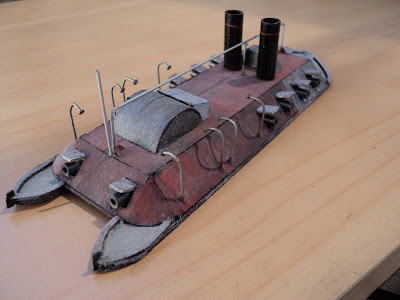 I chose a 1:300 scale, for a number of reasons. My ACW armies are 20mm plastics: mostly Airfix, with a few ESCI units thrown in (including a small unit of Berdan's Sharpshooters). Because of the compromise between figure and ground scales in wargames, naval vessels the same scale as the figures would look plain wrong. The Arkansas, for instance, would have to be 30 inches long by about 5 wide - imagine what that means in terms of ground scale: something over half a mile in length! 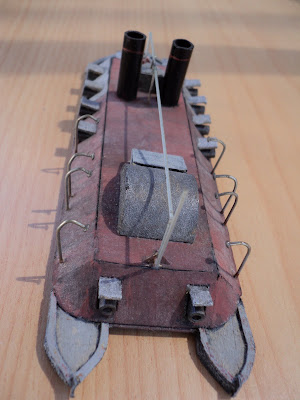 So I opted what I was using as the ground scale for my naval forces. 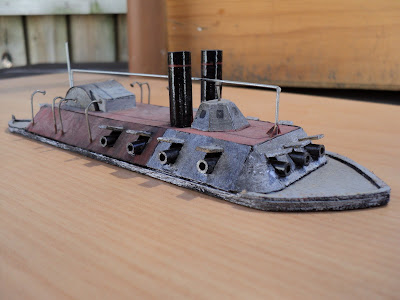 That the two don't look completely out of place on the same table was about what I hoped and expected. I'll post some pics of them together in a later posting. Meanwhile, more Mississippi Eads gunboats... 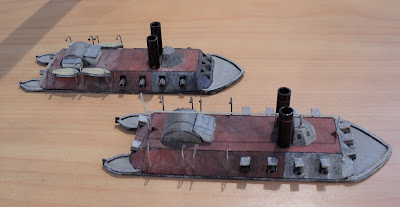 Cairo and Carondelet steaming downriver. You can see my rather piecemeal approach to construction, one vessel receiving its full complement of lifeboats; the other its ... awning rail? I am tempted to give at least one of them an awning, even though they were taken down in action. Wargamers' licence: it would add, perhaps, a little colour... 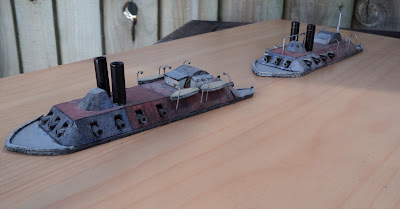 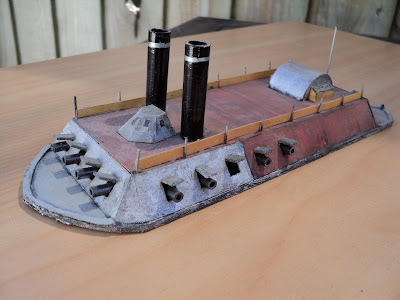 This is the king of the Eads gunboats, the Benton: 200 ft long, 75 ft beam (yep!), 16 guns. Actually, this Benton is missing a couple of guns. Earthquake damage likely enough. The set of drawers in which these boats reside was thrown to the floor from a great height twice (in February, then in June) by earthquakes, but the ships came out of it not too badly, on the whole.

But I notice from Battles and Leaders that later in the war, the Eads gunboats had cut back on their ordnance, often carrying three or four guns only, instead of their full complement of thirteen. So some empty gunports are not altogether out of place. 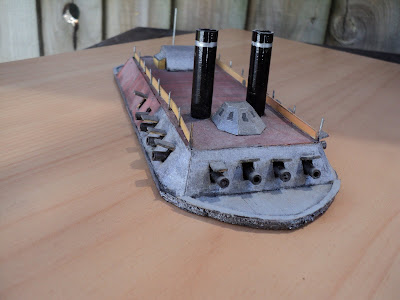 Finally (for this posting) a look at the first Ironclad I attempted, the Watusi. 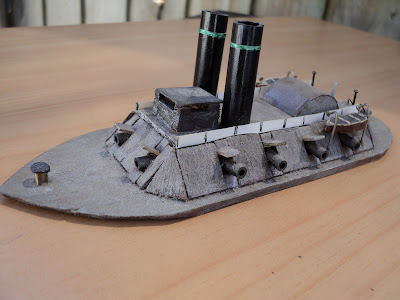 A bit rough, and, lacking much information on riverboat construction, I made a lot of guesses. It was never intended as anything more than a 'generic' ironclad river gunboat anyway. I seriously doubt that there was ever a Watusi (named for a dance craze of a century later) afloat upon American rivers in the 1860s... 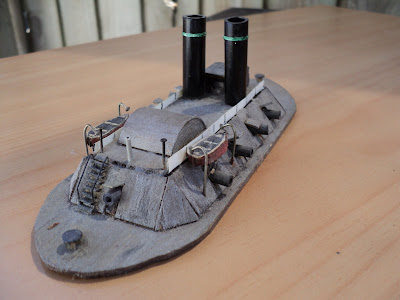 I had some misgivings about the stern, but need not have worried. I believe the Essex was built on vaguely similar lines. I've never had the heart to 'retire' this vessel. It has served in a few fights, standing in nobly for Tyler and Lexington in a Shiloh refight in 1990. And I've always rather liked that laddery thing climbing the stern casemate...

To be continued...
Posted by Archduke Piccolo at 6:45 PM