To:  His Imperial Majesty Emperor Violoncello VI
At: Schnitzel.

I beg leave to report a victory over the Rebel Army and their Ally the forces of the Herzogtum von Rechburg yesterday.  Though not as decisive as we might have hoped, I believe our success leaves us in a position - with the assistance of the troops of Altmark-Uberheim - to bring the campaign within a few days to a final and successful conclusion.
Yesterday's was two battles in effect: the early ,\morning attempt by Graf Tympani's Horse to overwhelm the Rebel left flank, ultimately unsuccessful despite his victory over the Uhlans of Rechburg; and the afternoon attack by the insurgents upon our line.  That was seen off with serious losses to the rebel cause.
The early dawn saw our army approaching the Paisley River - a stream fordable along its length with only moderate difficulty - and passing through the village of Moorgham.  In the distance to the north, we could see the Rechburg troops approaching.  No sign of the Rebel Army, but owing to the determination of the Rechburg approach, it seemed clear that Marshal Noailles's forces could not be far off.
(As it transpired the Rebels began 'off table'.  Each Brigade had to roll for time of arrival, with the ETA being Move 3.  The tariff was:
Roll 1: Celerious Commander Brigade arrives 2 moves early (i.e. Move 1);
Roll 2:  Diligent Commander; Brigade arrives 1 move early;
Roll 3: Arrive on time;
Roll 4: Arrive on time;
Roll 5: Unforeseen delays; Brigade arrives 1 move late;
Roll 6: Dilatory commander; Brigade arrives 2 moves late (i.e. at Move 5).

Well, Barry (Marshal Noailles) rolled 3 dice for the infantry Brigades.  Triple 1.  There are times when you wonder if there is a God or Goddess of Wargames - Bellona perhaps.  If so, she has a wicked and capricious sense of humour.  So all the infantry and the guns (I forgot to do a separate roll for the artillery)  arrived on Move 1.  The Horse must have been acting as a rearguard for the army, for they turned up late at Move 4.)

As the Horse, massed upon our Eastern flank, splashed across the stream, our infantry were finding the crossings progressing rather more slowly.  My plan was before the arrival of the rebel horse, to assail the enemy left if I could, anchoring my own left upon the village of Moorgham.  This place was somewhat protected from the west side by a tract of impassible country penetrated solely by the river gorge.  Although a company of Baden-Durlach garrisoned the west face of the village, no attack developed from this sector during the whole day.  The remainder of the regiment formed a front along the river bank together with a battery.  The jagers protected this front for a space, then regrouped for a transfer to the dense woods a short distance from the far bank.


Meanwhile, the enemy troops were shaking themselves out into a holding position around the Asper Village and the hills and ridges east therefrom.  The Rebel light infantry penetrated the light woods hard by Asper's west side, whilst the Rechburg Heavy Cavalry (identified as the Klutzenputz Cuirassiers) fetched a sweep around the west side of the timber and menaced our left.
Observing the lack of enemy cavalry to his front - save the lone Schaggenstein Uhlans - General Graf von Tympani hoped by a quick advance to overwhelm the rebel foot and guns.  In this he got rather ahead of his supports, only a single battery being in a position to offer help.  The enemy practice proved far more effective than anticipated.  Nadasti hussars, already much reduced in earlier actions, fell back early.  Khevenhuller dragoons suffered a similar fate, and the gallant charge by Trautmannsdorf Cuirassiers against the overlarge Rebel battery was broken up by canister and grape.
Possibly over-boldened by all this, plus the timely arrival of the Ulrichstein Horse, the Rechburg Uhlans offered battle to our Anhalt-Zerbst Cuirassiers.   Nothing loth, the Cuirassiers at once charged and flung them back with heavy loss at trivial cost to themselves.  But the fact remained that we had incurred very heavy losses overall to our Horse, with The Hussars, Dragoons and Trautmannsdorf Cuirassiers out of action for the rest of the day.  We could no longer count on any superiority in that arm, and still
faced a considerable deficit in terms of foot and guns.  Nevertheless, I saw no reason to suppose the action had yet been decided.

Confident that the enemy needed a decisive victory more than we did, we continued to offer battle.  For the remainder of the morning, I drew in the cavalry on the right whilst building up a front of foot and guns.  By this time the Rebel Horse had long since arrived upon the field.  In the circumstances, then, it seemed meetest to leave off our own attack, and invite the enemy to try his luck.  By no means were we to accept the repulse of our cavalry as the arbiter of the action.


(Unfortunately, the Archduke doesn't seem to have conveyed a true impression of just how shatteringly effective the rebel gunnery was. The reason for the paucity of pictures at this point was I was so caught up in trying to force home a telling cavalry attack - with few supports - in the teeth of the galling gunfire of 15 guns (5 models), that I forgot about  getting the camera into action. Three cavalry units reduced by more than half - and Trautmannsdorf Cavalry didn't even make it to the guns.  The temptation would be at once to start fiddling with the rules, but one ought not to be over-hasty in this regard.  It would have been equally tempting to concede the palm - I know many wargamers who would have done - but upon reflection concluded the battle was not yet lost.)

A lull settled over the field as we made arrangements to form a line.  The jager won the race for the thick woodland, aided by an earlier incident in which the enemy light foot came under accurate fire from our 2nd Artillery Battery near Moorgham. 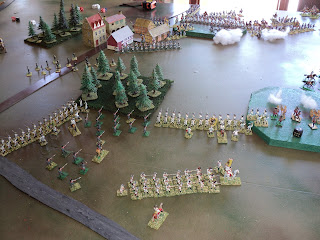 So effective was our gunnery that the enemy jager retired hastily into the light woodland whence they had emerged.  But it soon became clear that the guns would be wanted nearer the centre of our line.  They were ordered to cross the bridge and deploy in the defile between the wood and the rising ground to the east of it. 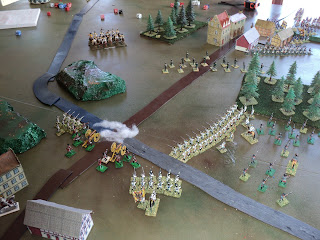 At the same time, Baron Glockenspiel, commanding at the village formed his available troops - Baden-Durlach and Arenburg Infantry into a re-entrant, flanked by the impassible ground on the left and the jagers in the woods on their right. 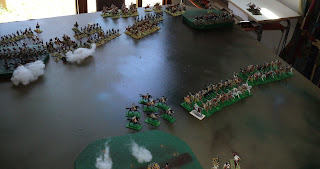 The enemy were finding it difficult to bring their forces in a position to attack.  Nevertheless, the ball was in his court, and time was not on his side.

(The effect of my rule set is to give the whole thing a rather stately feel - it takes time to do things.  This affects both sides, of course.  There are certain things that make life difficult.  I do not allow guns to fire over the heads of friendly troops.  Such a practice was Not Done - for a given value of 'Not Done', of course.  The other is the problem of passage of lines.  I'd give something to know how it was effected, but I suspect the wargamers' interpenetration has the effect - and the credibility - of Star Trek style teleportation). 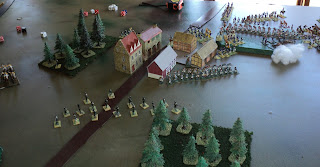 Within a few hours, our preparations were complete, and we could face with confidence whatever the enemy might attempt to our discomfiture. 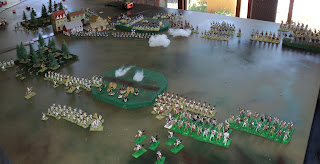