Something a bit ... different. 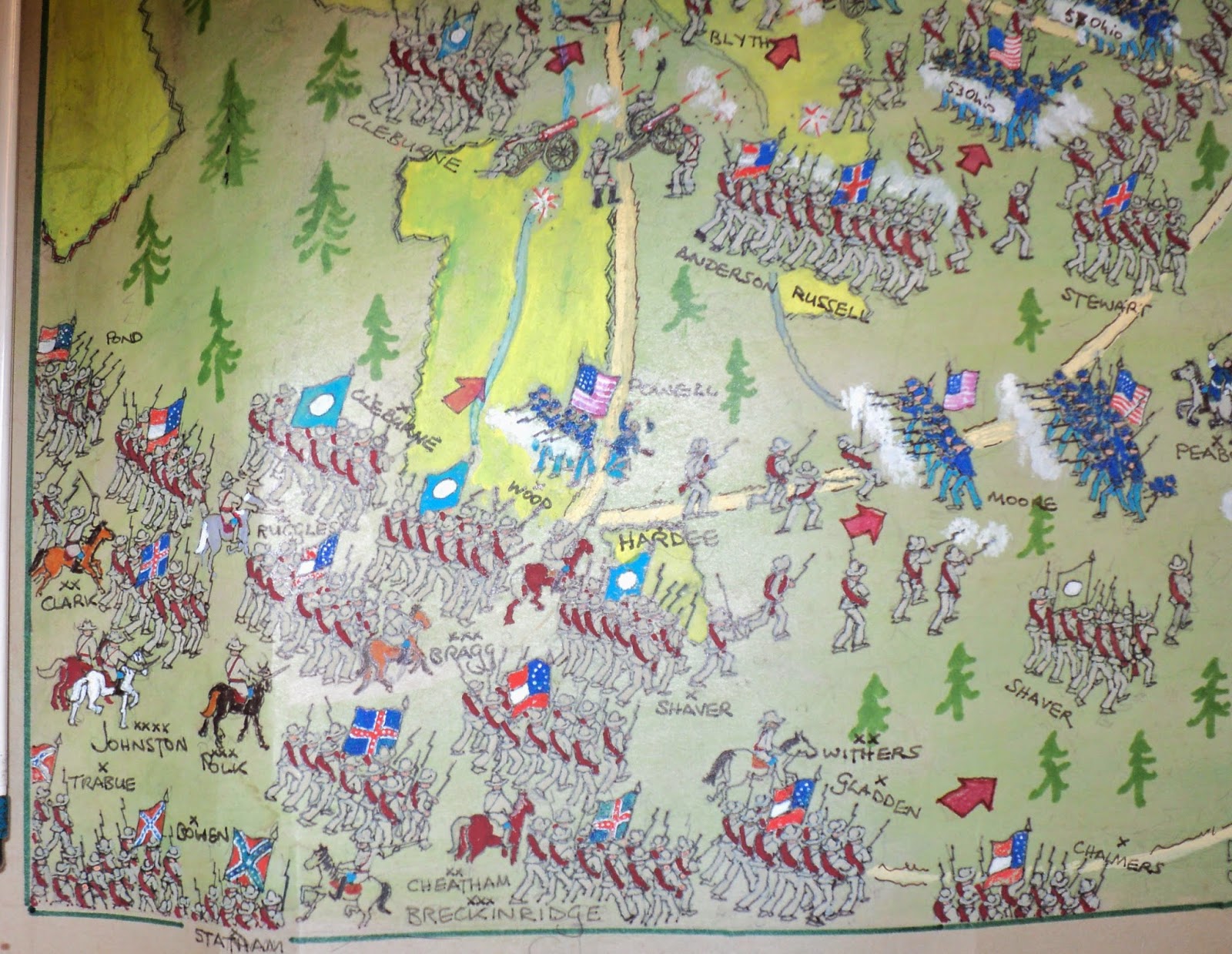 It was when commenting in my previous posting, and thinking about 'Pickett's Charge' in terms of time elapsed from the order to attack, to General Armistead's crossing the stone wall into the Union postion, that I was reminded of something I have been meaning to for quite some time.  I recalled a National Geographic article in the Gettysburg and Vicksburg centenary issue of  National Geographic (Vol 124, Nr 1, July 1963), which showed some very fine maps of the unfolding action.

These images have always been a favorite with me, since seeing this at age 12.  I longed to do something of the sort myself.   Many, many years later, but so long ago now I don't recall precisely when - early 1980s, I think - I did embark on such a project.  And here is the result. 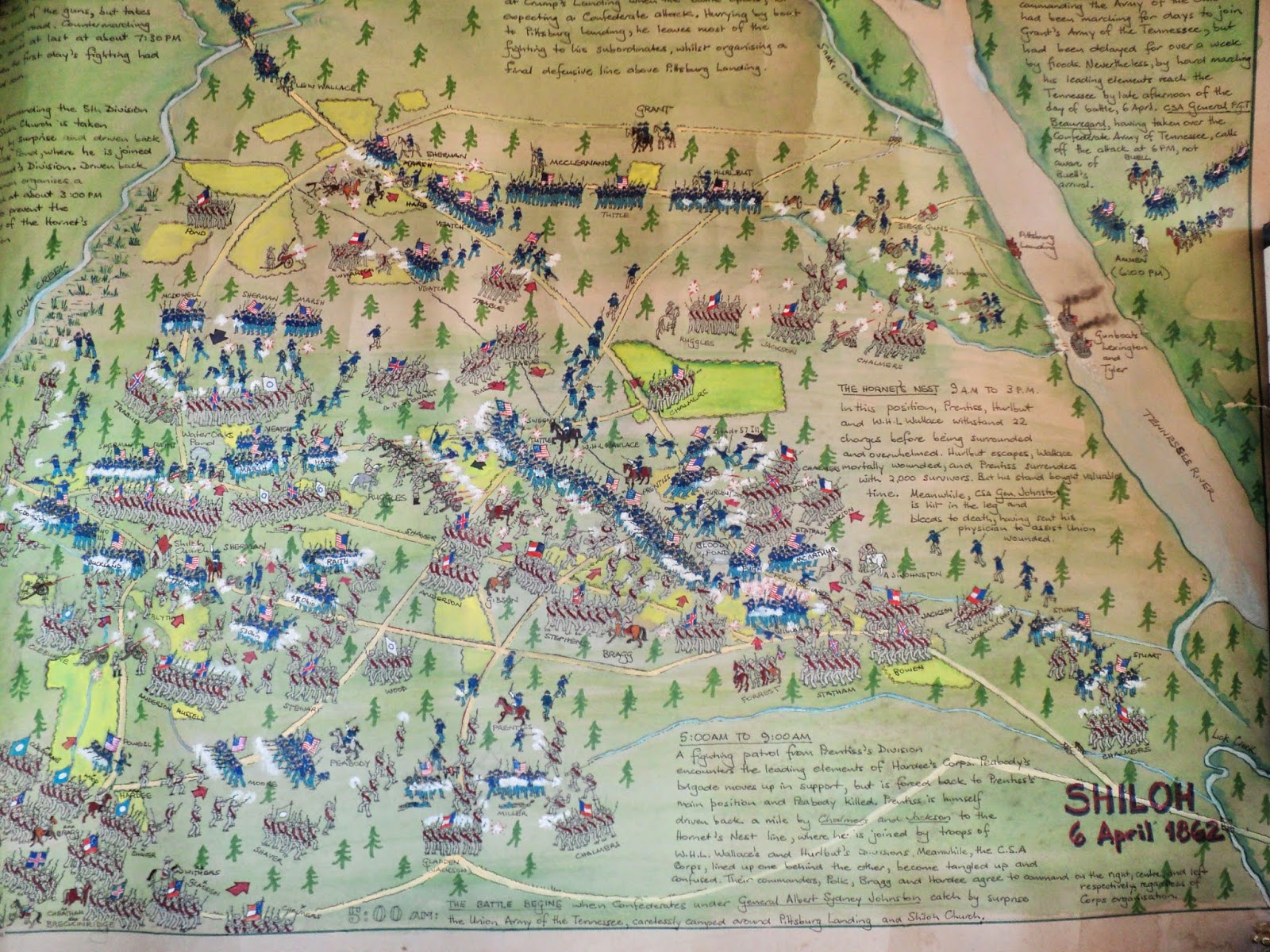 Having read Wiley Sword's (now there's a name!) Shiloh: Bloody April (1974), I meticulously copied, by hand, all the many maps included in the narrative.  I highly recommend that book by the way.  But as I found it very difficult to follow the overall first day action, I made a kind of combined map.   It seemed to me that this map could be given the 'National Geographic' treatment.  The following pictures show details from the map, in a vague chronological order as the events unfolded.
Beginning with the bottom left corner, we have the Confederate Army drawn up in successive Army Corps lines, according to the scheme drawn up by General P.G.T. Beauregard.  For the purposes of this map, the brigades of each Corps were identified by their flag designs. Hardee (III Corps) had gone for a blue flag with a white roundel or oval;  Bragg (II Corps) I issued an early 'Stars and Bars' battle flag; Polk's troops (I Corps) have the flag he designed, and I gave Breckinridge (Reserve Corps) a version of the well-known Beauregard-designed flag.
I have to admit I never did finish the thing properly.  I notice now (having looked at this thing for the first time in years), that the flags of Hardee's Corps (really a Division) were neglected. And a few figures were overlooked as well. 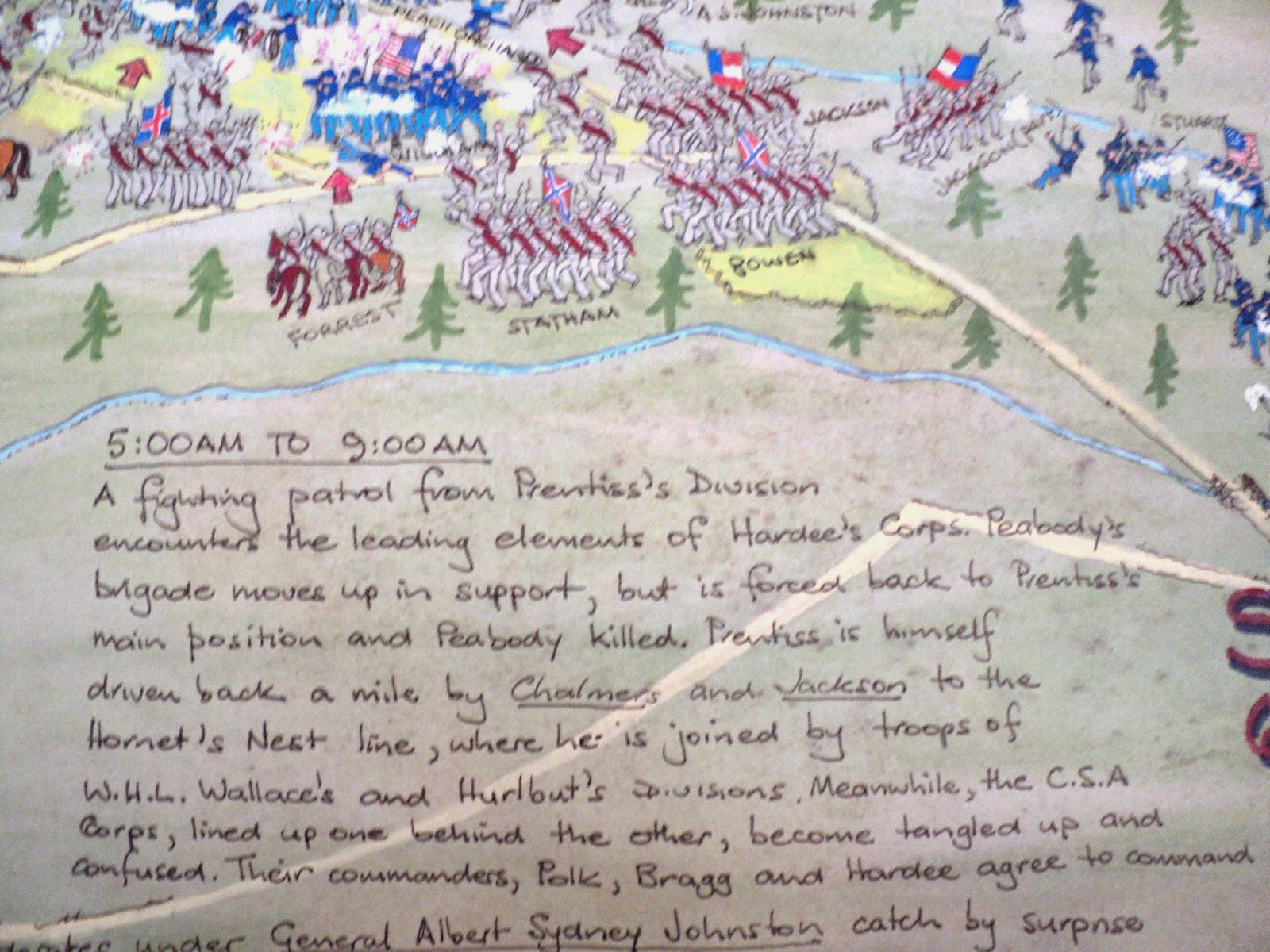 I liked the idea of adding, again comme ça National Geographic, a narrative in panels around the map.  I could have designed them better, but they do help to follow what's going on, I think.
Annoyingly, I too hastily drew the trees in with felt pen, a decision I greatly regret.  Nor is there much I can do about it, neither.  For the rest, the figures were drawn with water based ink pens...
... and painted with gouache and water colours.The background is simply a watercolour wash.

I don't recall how long this thing took to complete - several days, for certain, but whether mostly in one sustained period of time or off-and-on over some weeks, I can't now be sure.  Probably the bulk of the thing was dome quickly, and it was finished - for a given value of 'finish' - in a more leisurely fashion.  I had no deadlines to fulfil!
Overall, I liked the animated effect that the National Geographic artist achieved, not to mention the style of superimposing the figures upon a much smaller ground scale - just as we do with war games, though I did not know that when I first saw the publication.  At any rate, I tried to achieve the same effect here, whilst simultaneously adding a time-lapse effect in the same manner as the Bayeux Tapestry.
How effective was it?  Well, I was fairly pleased with the overall narrative effect, though a few design glitches presented themselves.  Not knowing what the gunboats looked like, I presented them as 'generic' riverine craft.   But the main design problems came with the textual narrative.
I've had this picture rolled up, stashed away, and almost forgotten for perhaps as many as thirty years now, not really sure what to do with it.
Posted by Archduke Piccolo at 1:21 PM