Retreat from Smolensk: Part the Fourth.

Resuming this series of Napoleonic postings...

As the French Army waited on the heights, the Austrians advanced all along the line, albeit rather cautiously on their exiguous right wing.  On the left, Zonkovo village proved something of an obstacle.  The middle Divisions of the successive Corps on this wing had to drop back behind their left wing Divisions to pass west of the place, whilst the respective right wing Divisions passed by the east.  The village itself was left for the II Corps artillery to pass through.


The upshot was that the 3rd Hungarian Division, in striking the French right, had to sustain alone  its attack against the French right flank for over an hour, until the 2nd ranged up on its left.  Until then the French were managing to hold, but with odds increasing to two to one, found themselves being forced back .  The rearward move accelerated until the Division broke, and fled incontinently from the field.
To their right an artillery duel and bickering skirmishers kept the 2nd and 3rd Divisions free from encumbrances as they drove back the French.  Meanwhile, the Hungarian 1st (Grenadier) Division encountered the French 5me to the left of the Clxix village that formed the centre of the French line. The Hungarians got the better of the tough and costly struggle that ensured, supported as they were by the heavy (12pr) ordnance of the Army Reserve artillery.
No sooner had the French infantry given way, after a three hour (3 turn) defence, French Cuirassiers took up the fight.  Forming square betimes, the wearied and battered Hungarians shrugged off the heavy horse.  But the effort had depleted the Grenadiers' last reserves of strength.  Intervening personally, the Archduke drew the battered Division out of the line, that 1st Divsion I Corps could sustain the action.
The Reserve Corps undertook the attack on the French centre, mainly to inhibit the defenders shuffling troops across to uphold their beleaguered right.  First Grenadiers carried the village itself at the first rush, but there they stalled.  Though they gave up the place quickly enough, General Broussier quickly rallied his Division into forming a new line a short distance to the rear.  For almost the duration of the action, the Austrians we unable to debouch from the village.
Fortune favoured them in similar fashion immediately to the east of the village, where the French IV Corps artillery stood. At first coming under attack from the understrength 2nd Grenadier Division, they found themselves having to deal with Austrian heavy horse as well. Chancing their arms, the Austrian Cuirassier brigade stormed the gun line, sabred the gun crews, and made off, leaving the grenadiers to deal with the counter-attack that came, all too soon.
Under attack from French lancers and infantry the grenadiers sustained a stout fight until well into the afternoon.  They had considerable help from accurate gunnery from their artillery park (the gunfire of both sides was pretty good all day).  All the same, it was only when the archduke felt himself, late in the battle, able to divert troops from the left that the pressure in this sector eased.
It was just as well, for the exhausted grenadiers had broken by then, and retired in confusion well to the rear.  All the same, they had sustained their line long enough to compromise any chance on the French restoring their fortunes by a victory in this part of the field.
Throughout the action, General Reynier had found himself skewered on the horns of a dilemma. Unable effectively to reinforce the crumbling I Corps and battered IV, he itched to counter-attack the slender forces that seemed to be confronting him.  To advance from the slopes to the plain below seemed, however, to exceed his orders (that is to say, seemed to be beyond the parameters of the scenario).

The defeat of 13me Division forced his hand to the extent that he ordered 21me Division to counter-attack the 2nd Reserve.  After an interval, he flung in the 22me as well,  Below establishment as they were (20 figures instead of my 'standard' 24) these Austrian grenadiers eventually drew the attention of two enemy infantry Divisions and the Lancer Brigade as well.  Small wonder that by early afternoon, they had had enough.
Reverting to the decisive action on the French right, Dessaix's Division had been swept from the field with the Hungarian 3rd and 2nd Divisions following up in pursuit.  To plug the gap and sustain the right, General Gudin brought his 3rd Division round in rear of the wood, and engaged the two Austrian.
Into the gap between the Hungarians and the village of Clxix, swept the Austrian I Corps.  Third Division aimed for the open space between wood and village; whilst 2nd Division, with nowhere else to go, undertook the trek through the dense foliage of the wood itself.
His right flank crumbling out of existence, Prince Eugene flung in his last reserve that remained in the centre - his Brigade of Dragoons.  They caught a hurrying Austrian column before it could deploy into squares (I may have to implement a special masse rule for the Austrians).  Although the infantry stood for a time, they finally broke (phenomenal dice rolling by the French dragoons!).  In the ensuing pursuit, the Dragoons then caught the I Corps artillery limbered up and hurrying forward. Wiping out most of the park, the victorious dragoons then made off, with Austrian Uhlans in close chase
Small successes like these could not disguise from Prince Eugene's discerning eye, that the battle as a whole was already lost.  Though Gudin held his own at two to one odds for an hour, that could not last.  Reynier's counter attacks, though gaining some ground, were becoming more likely to exacerbate than mitigate defeat.
The dragoons had been his last reserve: nothing remained to stem the French tide.  When Broussier's Division's attempt to bottle up the Austrian Grenadiers in Clxix at last collapsed, and Gudin's Division was being driven in towards the centre, that was the signal for a general retreat.
The Austrians were cock-a-hoop, as you can imagine.  It had been a decisive victory, in little more than half a day, and a disaster for the French.  Aghast upon hearing the news, the Emperor Napoleon gave vent to an explosion of rage, and briefly considered sending his step-son home.  But, as ever when faced with reality, Napoleon kept the Prince on, and recast his plans for his continued withdrawal from Russia.
Meanwhile, what of Marshal Davout, and his encounter with Admiral Tchitchagov's Corps to the east of Zonkovo?  Even if successful, could he get by the victorious Austrians now occupying the villages of Zonkovo and Clxix?

As I mentioned in a previous posting, this was an experiment to see how a large-scale battle might be enacted on my small, 4ft by 4ft 5in (122cm x 134cm), table.  I'm not sure it was a complete success, but it wasn't a total failure either.  The main problem in this action was the difficulty in articulating the defence.  Perhaps if the hill line was brought 6 inches (15cm) closer to the centre, that would have been enough to give the French the needed flexibility.

The Big Battles for Small Tables still needs a lot of work.  Here are some of the problem areas

1. Combat still favours column over line.  I have some refinements in mind that, rather than play around with the combat mechanics as such, gives the line some options that will increase their effectiveness.  In order for this to happen, though...
2. ... I am beginning to think the IGoUGo system will have to be adopted.  Now, I am very much in favour of simultaneous moves, or systems that come very close to it (such as that used in the Italieri sponsored Operation Overlord rule set of several years ago).  The fact is that simultaneous moves is very hard to do right in solo play.
At any rate, the effect on combat is that a defending line will be able more easily to throw forward its flanks in its own turn to offset the one or two figure limitation on overlapping files able to shoot. 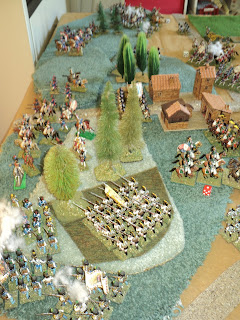 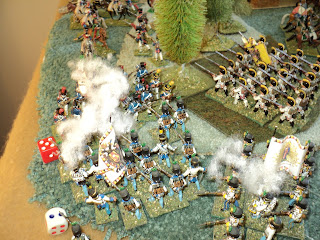 3.  Cavalry vs infantry is very hard to get right.  They will beat lines and columns, all right, and attacking squares is a losing proposition.  That's fine.  Although the French Cuirassiers beat the Hungarian grenadier squares in this action, the circumstances made this credible: The Hungarians had already taken a battering whilst defeating the French 5th Infantry Division, and already lost 25% of its strength.  The Cuirassiers were fresh and counted as elite (though so did the grenadiers).  Although the dice rolls of the first encounter were even, those of the second heavily favoured the French, and brought the Hungarian strength down to 50%, enough to break them.  Mind you, the Cuirassiers were not in very good condition afterwards, neither.

4.  Morale/Reaction.  I was going to keep this at simply the 50% rule and/or the outcome of close combat.  This will have to change, no question.  Morale rolls will also go some way to modify the present advantages of column over line in close combat.

5.  Command and control.  Some work is needed here, as well!

Posted by Archduke Piccolo at 9:07 PM