The Virginia songbirds, at daybreak of 21 May 1862. had barely cleared their syringes to give clear voice to their dawn chorus, when General N.P. Banks's command took to the road back the Strasburg. The previous night's sharp little action showed the road was blocked by a greatly superior force. Who knew where the detachment under Colonel Knipe was, and nothing had been heard of General Shields.  Was he even in the Shenadoah Valley at all? For his part, General Fremont was still well out of the picture.  It was no means certain he was east yet of the Allegheny Mountains.  It would be at least two days before he could enter the picture with effect.  The road east was, for the time being at least, firmly closed to Union traffic.

An habitual early riser as he was, and a deal more dynamic than his sobriquet might suggest, General T.J. 'Stonewall' Jackson had his command as rapidly in motion.    Leading the pursuit rode the cavalry regiments of Colonels Munford and Ashby, accompanied by Captain Chew's 'flying' battery. Fifteenth Alabama of General Trimble's Brigade led the infantry along the road.

For this action, I adapted one of the scenarios from the Grant & Asquith Scenarios For All Ages book.  Namely: Scenario 7: 'Hot Pursuit'.   Certain adjustments I had to make for this action.  Readers familiar with the scenario will observe no stream or creek athwart the road - at least, not yet.  I also decided early on that it would be likely I would have to 'scroll' the table.  That will become evident from the pictures later on.  At that point, the creek makes its appearance


From the outset, General Jackson's plan was clear.  First off, he detained General Winder, with his 'Stonewall' Brigade and two gun batteries, to guard his rear, in particular to keep watch and ward upon the Front Royal road.  He did consider ordering Winder to march back to the McCoy's Ford turnoff, but as that might carry his brigade beyond timely help should he encounter a superior force, caution prevailed.  Wait, and if necessary hold.

For the rest, the cavalry and Chew's battery would march rapidly along a line south of and parallel to the road.  If they could overreach the head of the Union column well and good.  At any rate, their purpose was to force Banks to deploy his whole strength.  Meanwhile, the infantry and two batteries of light artillery would march straight down the road, and deploy if and when the enemy did.  Colonel Brodhead, commanding the single battalion of 1st Michigan Cavalry, at once appreciated the danger. Undaunted by the odds facing him - three to one - he ordered the charge.  That order had at the same time gone out on the Confederate side.   In an attempt to save time both cavalry regiments split in two, attacking with the lead halves, and hoping that the unengaged elements would be permitted to carry out their pursuit of the hurrying infantry.

In an astonishing feat of arms, 1st Michigan (15 figures) held its own in the first clash against both opponents (10 from 2nd Virginia, 11 from the 7th) inflicting five casualties and taking just as many. Munford's Regiment got the better of their encounter, inflicting 3 casualties for no loss.  It was Ashby who took the drubbing, inflicting 2 casualties but taking no fewer than 5!  That part of Ashby's command promptly bolted, forcing the gallant Colonel to throw in the balance of his regiment to restore fortunes. For its part, the Union cavalry passed its morale test, as did Munford's.  The fight continued.
If the first encounter redounded to the credit of the Union horse, the following melee merely added further laurels..  Ten figures now faced twenty-two.  Even so, the Union still gave as good as they got - three figures lost on both sides.  Of course, with over half the battalion dead, wounded or unhorsed, that was the end of the line for 1st Michigan.  Its remnants broke off and fled into the woods to their rear, from whence they were to make their escape.  The Confederates were left in possession of the field, but wiping their bloody noses as they prepared to resume the pursuit.
By their magnificent 1st Michigan they had probably saved Banks's command from annihilation - certainly from a worse mauling than it did receive.  (The Union dice rolling was good, but not remarkably so,  Rather, the Confederate dice rolling was truly, and outstandingly, horrible - you rarely get to see the like). That left just half of Munford's cavalry, and Chew's guns, immediately to take up the pursuit.  Once rallied, the engaged half were able to catch up and rejoin the chase. Colonel Ashby, on the other hand, regrouped his horse, taking a good hour to rally his routed troopers.  That might, as things transpired, not have been such a bad thing. 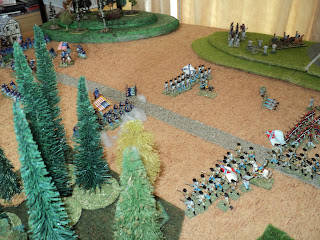 I had intended here to carry on the narrative of the pursuit, but it seems to me that the gallant fight of the 1st Michigan Cavalry deserved a posting all of its own.  So I will delete the following - wow 15 - pictures and continue another time....
To be continued...

Posted by Archduke Piccolo at 3:42 PM

Email ThisBlogThis!Share to TwitterShare to FacebookShare to Pinterest
Labels: ACW, Campaigns, Stonewall in the Valley, The War Between the States