Stonewall in the Valley 14 - No rest for Rebels.

As Major-General Nathaniel P. Banks trailed northward with his battered corps, the Confederates found they could not yet rest in the laurel so far won.  True, it was likely Shield's - now General Erastus Tyler's - command would probably put in an appearance in a day or so.  It the appearance at last of  the third Union player in the drama, Major-General Fremont Mountain Department Army that would force the weary Army of the Valley back onto the road. 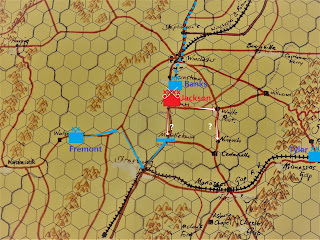 As the fighting of the 23rd May drew to a close, word had arrived at Major-General Jackson's battle HQ that Fremont's army had entered Strasburg.  Although his first impulse was at once to turn on his heel and storm that place, it was clear that his army needed a short rest to gather in his wounded, stragglers and prisoners of war. At once sending off his wagons and ambulances, escorted by the remains of Ashby's cavalry to White Post thence to turn southwards toward Front Royal,

For his part, Major-General was in a quandary.  Occupying Strasburg cut just one of at least two roads south available to the Rebs.  Should he stay and hope Tyler cut the other at Front Royal? Should he attempt to hold both roads with his own force unaided?  Perhaps he should advance upon the Confederate rear.  That he could reach Middle town by nightfall made that an attractive option. So the Union commander resolved.

Of the three options, that last seemed so likely compared with the other two that I weighted them, with the last a 50-50 proposition.  I rolled a 5, which score would have settled upon the Middleton move even were to options unweighted!

Learning of this, General Jackson was of half a mind to follow his ambulances and wagons with his whole army, and to get himself behind the Shenandoah River before seeking battle once more.  The alternative was to strike Fremont at once, when he was but two hours' march distant.

Because the option chosen by Jackson would remain a mystery until tested by the Union, the whereabouts of his army would no be known until his army was about to enter Middletown, or was a mere hour's march west of White Post.  If that route had been the one taken we might have got a peculiar running action at Cedarville, the head of the Confederate column reaching the place a half-hour ahead of the Union.  But I might have guessed how it would be.

Stonewall Jackson's bellicosity undimmed by the the hectic five days just past, he sent his army straight southward.  The enemy had spent early daylight hours preparing dug in positions.  If the Confederates still enjoyed superior numbers, the difference was far less - almost insignificant - compared with what it would have been on the 19th.

To be continued -
NOTE:  The next couple of postings will be on different topics.  But we will get back to this story. I'm all agog myself whether the Army of the Shenandoah can pull off another victory - this time with an entirely fresh opponent.
Posted by Archduke Piccolo at 10:17 PM

Email ThisBlogThis!Share to TwitterShare to FacebookShare to Pinterest
Labels: ACW, Stonewall in the Valley