On Thursday evening, my war games buddy, Paul, a.k.a. 'Jacko' (Painting Little Soldiers) paid a visit. Usually we just have a war games chinwag, but on this occasion methought a small game was in order.  World War Two, using the simple rule set and a scenario from Neil Thomas's One-Hour Wargames.
These games comprise (usually, though not always) six units the side  On this occasion, being WW2, they were chosen from 3-4 infantry, 0-2 Tanks, 0-2 'Mortars' and 0-2 Anti-tank guns.  The actual composition was decided by dice rolls. Wouldn't you know it we both rolled '2', which gave us 3 infantry, 2 anti-tank guns and 1 'mortar'.
'Mortar' in Neil Thomas's rule set can stand for infantry guns equally well - the sort of weapon that might be ready to hand in a company level action.  The scale of action in these games is that of a reinforced company, each infantry unit representing a platoon of about 40 men, and each weapon representing a platoon or section of three. So both sides had an infantry company of three rifle platoons, plus support weapons.

The German anti-tank guns were represented by one towed and one half-track mounted PaK40 (treated identically); the Russians had two 45mm guns towed by light trucks. The Red Army 120mm mortar was matched by the German 7.5cm light infantry gun. We neither of us had a tank to bless ourselves with.

As I had rolled first, I did suggest that Paul might like to re-roll. But he was happy enough with the status quo. I discover that Mr Thomas recommended a re-roll in the event of identical forces being generated (I ought to have looked at the time, maybe), but the result was reasonably interesting as it transpired.

Paul got the Red Army (Russians. naturally), I got the Blue. Then we rolled for the scenario. Scenario 13: 'Escape'. Although this purports to be the Blue force 'returning from a raid'. I'm more inclined to think of it as a German force struggling to reestablish contact with the front line during the course of a Russian offensive that, having gained several miles of ground, is beginning to peter out. 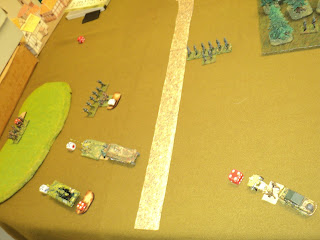 As the Germans stagger westwards (southwards according to book, but that is simply map orientation), the Russians race to slam shut the doors to escape.  Already a Russian platoon sits astride the road west.
As the Germans approach this slight obstacle, there suddenly appears from the south a lot of infantry - two more rifle platoons, swarming over the rise.  At once, the half-track AT gun turns to engage.  As the rules allow 360-degree fire for all units, turning the unit on the spot seems appropriate, for the sake of appearances at any rate.  Now, anti-tank guns aren't generally the best weapons with which to engage infantry (or anything else but tanks), and the SP gun is momentarily on its own.  But the other gun and Nr. 3 Rifle Platoon, swing to the left to join the fight.

The next day I did a bit of maffs and found that under this rule set, a fire-fight between two infantry units against one infantry and two anti-tank is very nearly an even match - just the sliver of an edge in favour of the two infantry in terms of fire-power, but this being offset by the 15 extra SPs they have to eliminate.  But in the German favour here was the clincher - the infantry gun: lethal against infantry. 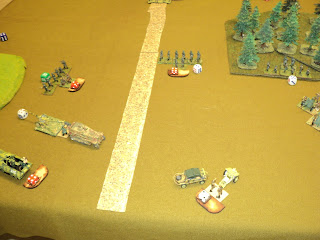 As it turns out, the SP anti-tank's shooting does a lot of damage to the Russian 3rd Rifle Platoon (Russians in Bold; Germans in Italics).  By the time the other three units join the action, the Russians on the rise are badly outmatched.   Meanwhile the 2nd Platoon and 1st Platoon are fighting their own private duel.  Here the Reds get the first shots, an advantage they never lose.  First Platoon enters the wood in the hope of outflanking the enemy road block.

Each unit begins with 15 'strength points' (SP), reduced by one for each pip on the dice representing shooting at it.  I represented this as a sequence of coloured dice, each representing 5SP in the holders illustrated (assembled from parts given me by Brian 'A Fist full of Plastic' O'Sullivan many, many moons ago).  The sequence was White/Red/Blue.  I place a SP holder only when a unit started taking hits (which is why you find the towed AT gun without a marker - it never took a hit).  Suppose an infantry unit has already taken 1 hit.  The SP indicator is a white die showing '4'.  Then it takes 6 more hits,  Then, having just 8 SPs remaining, the SP indicator is switched to a red die showing '3' (5+3).

Suppose next turn it takes a further 3 hits.  Then the final indicator will be the blue die showing '5' for that number of SPs remaining to it.
Then arrives the pair of Soviet anti-tank guns from the north flank, on the German side of the woods.

I had half-expected that.  The infantry gun at once switches targets to these guns, whilst at the same time the 1st Platoon is recalled and lines the eastern wood edge.  Although the Russian guns inflict some damage, they are badly over-matched - and this without taking into account the superb German shooting throughout the whole action.
Having seen off the flanking Russian infantry, 3rd Platoon and the AT guns swing westwards once more to resume their march.  But 2nd Platoon has lost its fight against the road block (the Russian platoon there helped by a section of AT guns that was close enough to engage the German infantry from the flank).  However, two AT units are no match for infantry backed by an infantry gun, and are soon overwhelmed.

By the time the final Soviet reinforcement arrives, the 120mm mortar in rear of 1st Platoon, it is too late, as the Germans finally broke the resistance of the riflemen.  It is merely a matter of a concerted push that will knock out the mortar and the Germans can escape.

In retrospect it is hard to determine the balance of that scenario as played with the forces allocated. German shooting was superb all night.  The 'one' shown in the picture to the right for 3rd Platoon shooting was a rarity, and my AT guns seemed to shrug off their disadvantages in this type of fight.  One thing for sure, the Russians could well have used their 'mortar' much earlier in the fight, perhaps substituting for one of the platoons on the hill.

Thanks, Paul, for an enjoyable evening.

Post script:  I was going to include in this posting some comments on scaling WW2 miniatures games.  I'll leave that for another occasion.
Posted by Archduke Piccolo at 6:20 PM