In a recent posting on his blog spot, Bob Cordery had a piece on the late Paddy Griffiths book, Napoleonic Wargaming for Fun, published, I think, in the late 1970s (see Bob's piece, here).  I never really did much with it - though I found the ideas interesting.  Somehow I permitted the book to go out of my possession.  Upon my move to Christchurch in late 1988, I found a whole bunch of guys (and a gal) using a version of the Divisional Game adapted for battles a whole deal more ambitious.
The orders of battle for these battles were diligently researched, on the whole, becoming more accurate (for a given value of 'accurate') as time went on.  Possibly we allowed for too many cannon in these battles.  I recall a later Borodino refight in which the Russians had two huge batteries, each a good eighteen inches to two foot long of 15mm scale cannon lined up hub to hub - one behind Borodino itself and the other behind Utitsa village.  Try bashing your way through that!  I think we needed, too, some method of breaking up combats along a large front, instead of subjecting the result to a single die roll.


At any rate, I got myself involved very quickly, my first battle being Jena, in which I played commander of a Division or maybe a small corps.  It was not long before I found myself  commanding the Allied armies.  Shown here, I hope sufficiently readable, is one of the AAR I submitted for the Club Magazine Southern Sortie.

Although I was nominally commanding the Allies, I had also to play the role of Prince Bagration in this action, which allowed the Russian right wing commanders a very free hand.  That was probably just as well, for they did pretty well by all accounts.  I was so busy on the southern flank I could spare only the occasional glance at events on the north side of the mill stream. 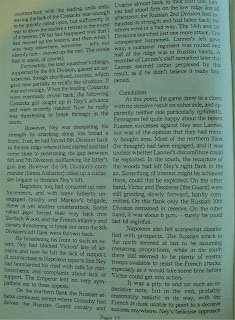 These battles drew quite a large number of war gamers into the action, as the cast of characters in this one will attest.  Big battles, vast tables, simple rules easily understood - yep: they were a lot of fun. We probably got through maybe three or four of these games in a year. It seems a pity that after about ten years or so they petered out.  I miss them. 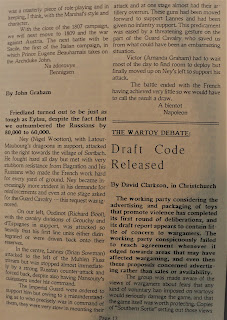 Posted by Archduke Piccolo at 6:56 PM