My last posting showed an interesting and useful pile of stuff sent to me by a fellow blogger from the Land of Oz (Mark, of One Sided Miniature Wargaming Discourse} .  Here is what I have done with them in the last week or so.  The T70 and the BA64 I touched up with a lighter green and some weathering, and added identifying numbers (usually, I paint them on, as here, rather than using transfers) 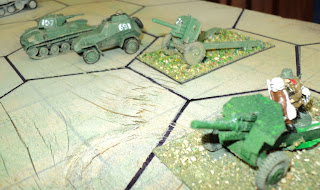 This picture compares the assembled 122mm howitzer with the semi-scratch-built I made some years ago,  This new addition doubled by 122mm howitzer inventory! 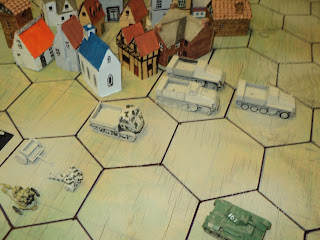 The Nebelwerfer came already assembled: you've seen it before.  The metal 7.5cm infantry gun, limber and RSO tractor I assembled, and I've given them a very basic paint job.  The tracks and washes and such have yet to be done.  The half tracks are still awaiting their weaponry. The background buildings I will touch on later in this posting. 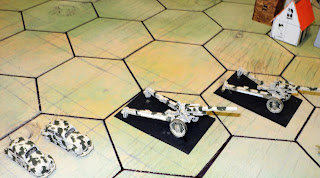 Before I do, I should mention these items.  The civilian volkswagens were given me by a friend quite a while back.  I don't know whether these models were ever used as staff vehicles by the Wehrmacht, but painted with camo, they do look the part.  The white metal 15cm howitzers I bought at a bring-and-buy several years ago, but assembled only this last week.  The recoil slides are a bit munted, about which I couldn't do much, but I figure that if the thing looks like what it's meant to be then that is what it is. 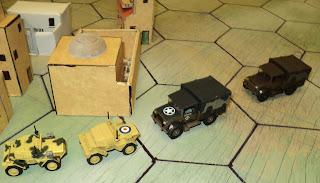 ...And these four items made up half my purchases from last Saturday's bring-and-buy at the Club: two Daimler scout cars, and two Bedford light trucks.  These are die cast models, something I didn't fully appreciate until I got them home (my eyesight really is becoming a problem...).

Now, these things.  Having got myself inveigled into grid war games, I needed to obtain buildings that were suited to my 4-inch square and 4-inch 'short-diameter' hex grids.  I have seen some impressive approaches to the problem on several blogs. The 2D (or 2.5D) approach by Foss1066 (Skull and Crown)  and Chris Kemp of Not Quite Mechanised. I find attractive, and it is only storage issues that give me pause about taking that line.  The former very kindly offered my a sample of his work, but as they are designed for 5-inch grids, and felt I had to decline. 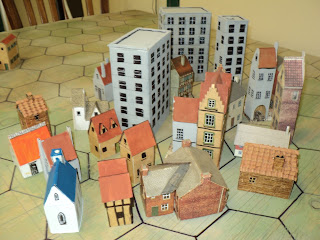 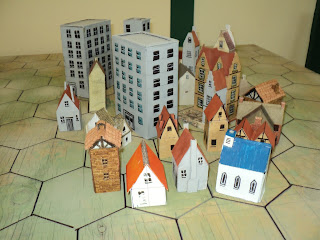 I have gone instead for the 3D approach using very under scale buildings, rather similar to that taken by Bob Kett ("A Village Hex").  What gave me the idea was in fact the wooden 'town in a box' building set used by Bob Cordery and others for their games.   What you see above is a town or city-scape of home made, downloaded and assembled, and commercial card buildings.  For twentieth century warfare, I felt the need for some 'high rise' edifices, simple, '5-minute' jobs that at least look the part.  They are simply tea and Tabasco sauce packets, painted overall grey, given a low parapet and with doots and windows drawn on.  The large ones exactly fit the oblong formed by the opposite sides of my grid hexes. 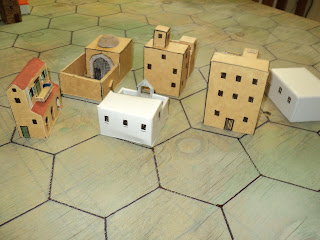 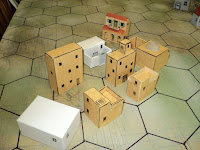 Considering my interest in the Western Desert campaign, not to mention Medifluvian (Mesopotamian) operations carried out by the Ruberian Army against the Turkowaz Enpire, I bethought myself to make a few vaguely Middle Eastern/ North African style buildings - mosque, administration blocks and what have you. 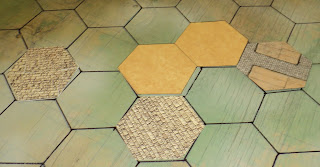 I don't show them in the above pictures, but here are a few  'built-up area' profiles that will be used for my hex-grid.  If buildings need to be removed to make way for soldiery of equipment, the grid area will (I hope) still be recognizably representing a village, town or city block.
Posted by Archduke Piccolo at 5:14 PM