Since I first discovered one eye clouding over with cataracts, some 13 years ago, I used to monitor progress by looking for the 3D Images in my Magic Eye book (Magic Eye, N.E. Thing Enterprises, USA, 1993).
... 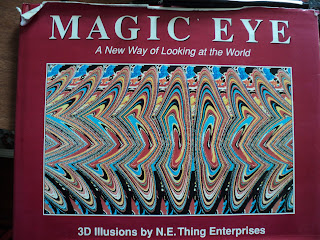 Gradually, some of the 'finer grained' images faded from view, until, until just a few months ago my right eye also started to fade, and that at an alarming rate.  Crossing the road was beginning to be a hazardous undertaking. Reading was becoming very difficult and tiring to boot.  So bad was it withal that in August I set wheels in motion to get the problem fixed.  Unwilling to take my chances on a lengthy wait through the public health system, I 'went private'.  Fortunately, I had enough money by that I could pay for it without borrowing. 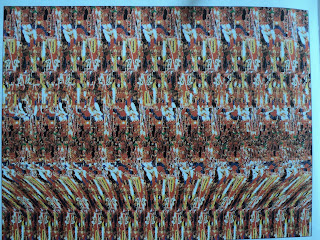 Now, in mid-December, cataracts have been removed from both eyes; my 'unaided' vision is better than it has been since I was 13 years old; and I am enjoying reading again.  "I can see again!  It's  miracle!"  ... I did so want to be able to say that.  Now I can see all the 3D images in this book, including that on the front cover and the end papers.  Wonderful.

(I found I could resolve these two images 'on screen' as well.    Even up to the end I could still resolve the two with only a little difficulty.  So you might want to give them a go. No spoiler alerts...)

Posted by Archduke Piccolo at 2:01 PM