Before continuing, some background.
1.   The first action was played under the Brigade Rules from Bon Cordery's Portable Napoleonic Wargames book, this one was played under the Division Rules chapter.  The third was to be played under the Army Corps set.
2.   The losses from each battle were not carried forward, the strength points simply assigned anew for each action.
3.   The first battle was played on my square-grid table; the other two on my hex-grid.
4.   The observant reader will note that Kurfurst Regiment seems to have shed a battalion. Quite right: I had simply forgotten.  No doubt Graf Kleist had detached that unit to guard some vital point back along the line of communication with Germany.  It was not until after the battles had been fought that I noticed the discrepancy. (Update: It turns out I was mistaken about that - there was no 'missing' battalion, and no missing SP after all!)
Marching up the road, General Merlot was faced with the task of closing off the east-west highway that led towards the main theatre of war somewhere around distant Charleroi.  That meant taking the town of Permez, and closing off the bridges over the Pahaux River.  Appearances were that the Hessians opposing him were close to his own numerical strength.
The plan he settled upon was to assault the town directly with the four battalions of Grand-Marnier's command advancing up the river road on the west bank of the stream, supported by his lone gun battery; the cavalry to envelop the German right to seal off the road west; and march the grenadiers under General Cointreau up the east bank of the river to try and force the crossing there.  Possibly not the best plan, but it was a plan, and had the virtue of simplicity.
The action opened with the French cavalry rapidly advancing towards a slight eminence to their front, which was occupied betimes by the German horse.  There ensued a prolonged cavalry melee of charge and counter-charge that swirled all around and over the hillock, neither side seeming able to deal the decisive blow.
The cavalry effectively neutralised for the time being, 3rd Light and 20th Line closed in upon the south face of the town, defended by the Haller Grenadiers, flanked on each side by a battalion of Kurfurst Regiment.  The opening exchanges went badly for the French.  Third Light Infantry found the enemy grenadiers formidable opponents, losses mounted rapidly, with no progress.  To their right, 20th Line were also being held by II Kurfurst.
Matters were such as to encourage I Kurfurst battalion to counter-attack against the flank-front of 3rd Light.  The Prussian guns then switched their attention towards the distant French artillery, and forced them to change their position.  The French cavalry had been forced back from the hill, and the lead battalion of light infantry badly depleted.  At this point, the way things were going, the French commander began considering whether to break off the attack.
However, the Kurfurst enveloping attack met a surprisingly sharp rebuff.  Driven back into the town under a galling gunfire, they found themselves assailed by the II/3rd Light Infantry, which unit had swung out from behind their comrades, charged into the town and inflicted further loss upon the importunate Hessians.
Driving back I/Kurfurst, II/3rd light infantry turned their attention upon the gun battery to their left.
By this time, after a brief pause for a breather, the respective cavalry battalions were once again in combat with pistol and sabre.  Count Cabernet-Sauvignon was still in the saddle alongside the hussars, despite taking slight wounds to his right arm and leg; but von Warburg was himself sporting a rag bloodied from a minor head wound.
Finally, the Chasseurs found the flank rear of the Prussian Hussars.  Already depleted, the Hussars found this last attack too much, and broke, fleeing off the hill and away to the north.  Unwilling to take on double their numbers, the Dragoons also fell back to try and reach the town.
[Aside: occasionally you will see a green and a blue die lying next to each other.  These are the close combat rolls, for the French (green) and Prussian (blue) respectively.  The 5-3 result between the respective Hussars give a modified '5' for the French (+1 for general with unit; -1 for enemy uphill) and a modified '2' for the Prussians (-1 for being attacked in flank by enemy unit).  The loss of the final SP destroyed the German hussars, who promptly fled.]
The prolonged urban fighting along the riverbank was drawing closer to the river bridge, by which time, von Mueller began to bethink himself of ordering the evacuation of the town.  The Grenadiers Haller were now in something of a salient, from which its counter-attacks were proving ineffectual, and even costly (now down a SP).  The French 20th Line Infantry were still in good fettle as they pushed to cut off the German garrison from their only route to safety.
Meanwhile, what of events on the east bank of the river?  Advancing up the river road, Col. Cointreau had formed the Grenadiers into order-mixte in the expectation of brushing aside the defending battalions of Kurprinz Regiment.  That expectation was rudely to be corrected, and after a good half hour or so, the French had taken some loss with the Prussian line unmoved.  The II Grenadier battalion shook itself into line to the right rear of the lead unit, and so began a drawn-out, inconclusive firefight.  Although occasionally driven back across the Chemin des Ramillies, I/Kurprinz was ever ready to return to the fray. [After a considerable time, both Grenadier battalions had taken a 1SP loss each; and II/Kurprinz 2SP loss, the I/Kurprinz, accompanied by von Wurzburg himself, none so far].
If the French could point to no progress at the east end of the river bridge, their momentum was gathering on the west bank.  Count Cabernet-Sauvignon waved the Chasseurs on to chase after the fleeing enemy light horse, whilst keeping 9th Hussars to face off the opposing dragoons. 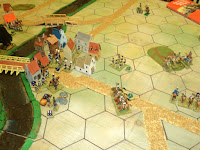 The German hussars having scattered and disappeared, the Chasseurs fixed their sights upon the German gun battery, which had withdrawn, somewhat depleted, to the northwest of the town.  The infantry garrison had pulled back into a small bridgehead perimeter, still under pressure, especially for 20th Line Infantry.

Although driven back across the Chemin des Ramillies, I/Kurprinz still offered a bold front, encouraged by their adversaries also finding it convenient to draw back to recover their organisation. [At this point, both sides took hits; but it seemed to me that neither would have been inclined to take the SP loss to maintain their position.]  Standing astride the main road east, the Germans were manfully keeping it open for their beleaguered comrades in the town.

There the situation was sufficiently dire.  Driven back along the river bank as far as the river bridge, II/Kurfurst battalion finally disintegrated.  If the Frenchmen could reach the river bridge before the Germans, they might bring about a wholesale surrender.

At the same time the French Grenadiers, renewing their drive for the opposite end of the bridge had brought II/Kurprinz to the edge of breaking...

... and the II/3rd Light infantry had caught up with the gun battery and overrun it before it could limber up and make off.  Only barely in time did I/Kurfurst make it to the bridge ahead of the French, and ensure the safe withdrawal of the remnants of the Germans garrisoning the place.

A word about the figures.  My Prussian army was made up of Italieri plastics, apart from the Revell 7YW hussars, and the metal gun and gunners.  This army was about to be deep-sixed by their previous owner, until I offered to take them off his hands.  It has to be said that this is not the prettiest army you ever saw; the figures really are moderately horrible (and the cavalry are still a work in not much progress, as uninspiring as they are).  On the other hand, the generals and some of the officers make quite nice command vignettes (you can see Generalmajor von Mueller and his staff at the town's edge in the above picture).

To be continued: the Battle of Rosiere - an Army Corps level action.

Posted by Archduke Piccolo at 2:39 AM