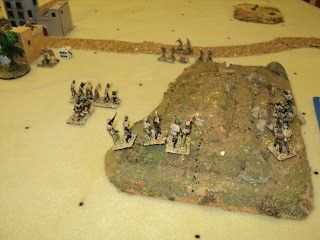 In the following narrative, I used Bob Cordery's Developing the Portable Wargame WW2 rule set. The only difference was my own 'dice method' of determining initiative and unit activation. However, as a result of this action, I think I'll be looking a little more closely at the 'pin' option, with a view possibly of moderating some of its more punitive aspects, or possibly of dropping it altogether.  Otherwise, this will not be a long narrative. 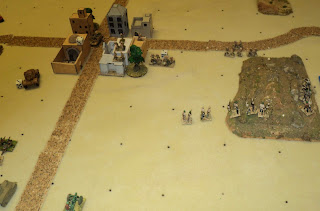 The rebel Baluchistan Armed Revolutionary Front (BARF) - for composition, see previous blog post - opened the ball with a battalion sized attack upon the high ground NE of Madasaiwannabi town, defended by 'C' Company, Imperial 22nd Punjanjoodi Battalion. Against possible retaliation from the town, the rebel machine gun and infantry gun detachments advanced to bring fire to bear on the place, and the mortars emplaced upon the northern outskirts of the town. 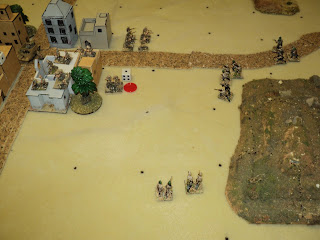 Although the early attacks on the ridge were handily repulsed - 1st and 2nd Coys, Ist Battalion took damaging hits, as did the defenders - because the attackers had had to fall back, they soon recovered their enthusiasm for the fight (the red 'pin' markers all came off). In the face of three times their strength, 'C' Company were fairly soon driven right off the feature, to the roadway. Whilst the mortar company, themselves under fire, held off the enemy 3rd Company, 'C' Company fell back behind them to the edge of the town. 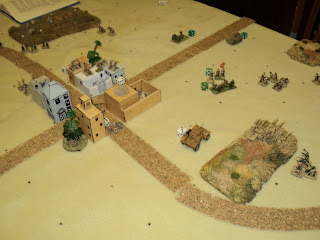 Meanwhile, the fire supports against the town were producing a slow, yet steady trickle of casualties among the Imperial troops garrisoning the place. The MG platoon abandoned the NE quarter - and several smashed up MMGs - to establish a new line beside the southern highway exit from the town. By this time, the late-starting attack by the rebel left was getting fairly under way. Sixth Company had managed, with minimal loss, to get themselves athwart the right flank of 'A' Company, which experienced some difficulty maintaining themselves.  Soon, 5 and 4 Companies, also came within rifle range, whilst Colonel Peenut Buttahjars himself directed the supporting fire of the MMG detachment. The armoured cars of  'C' Squadron, Muddi River Horse, drove back the Light MkVI tanks that represented at the time the Rebel's sole armoured inventory, but with no loss to either side.

An aside, here, to foreshadow a comment at the end of this piece about AFVs and ARVs that carry machine guns. 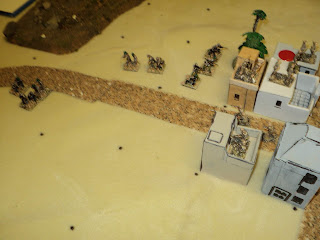 As the struggle south of Madasaiwannabi developed, at the other side of town, the Rebels overran the mortar battery, and drove 'C' Company quite within the precincts.  'B' Company's position suddenly became so exposed that for a short while were pinned down by fire coming in from front and flank. 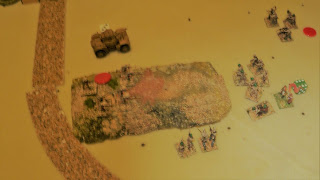 The position of 'A' Compnay was also becoming difficult. Driven back to the western end of the ridge, where they became pinned down, they found themselves assailed front and flank by two enemy rifle companies. The armoured cars did their best, wiping out the Rebel MG company, and damaging their 4th Company as well. 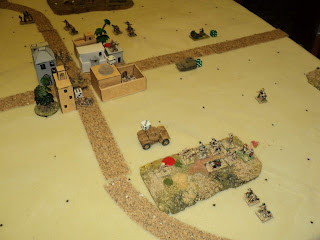 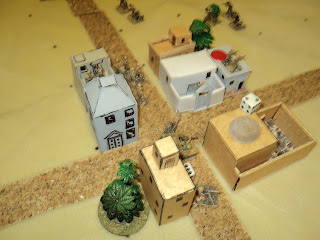 However, once pinned, and under close assault, unpinning became problematic, and 'A' Company's losses began to mount alarmingly. The relatively fresh 5th Company brought the Imperialists under close assault. Already repulsed at least once, 6th Company soon recovered themselves enough to join in the attack.

Under increasing pressure from I Battalion and support troops, the town's garrison, too, began to melt away. 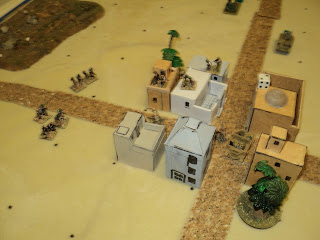 Finally, the Rebel 3rd Company broke into the northwest quarter of the town. Having already abandoned the rest of the north side, what was left of 22nd Punjandjoodi Battalion was left clinging to the southside. 'A' Company was never to join them. Apart from scattered, disorganised survivors, 'A' Company died defending the last few rocks on the western end of its ridge. 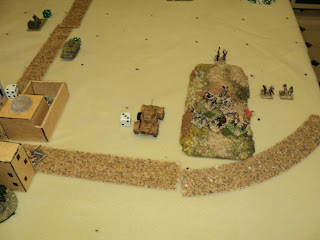 By now, Lt-Cool Mugglethwaite realised that what was left of his command could never hold the town. Giving orders for the evacuation of the place, he drew his headquarters several hundred yards down road west. There he awaited the arrival of the MG and armour car units, and whoever else managed to extricate themselves from the stricken town. 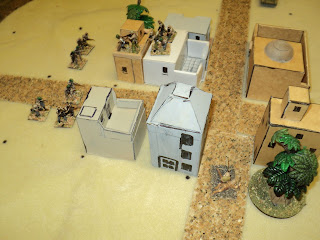 The Revolution was off to a fine beginning. For a long time the issue had seemed to be in doubt. At one point, the SP losses read 6 for the Government, 9 for the Rebels. But once the action became general and the former troops became pinned down whilst under close assault, the situation reversed rapidly. The Government losses exceeded their exhaustion point (9SP) much sooner than did the Revolutionaries did.  At the action's end the latter were glad to see what was left of the Punjanjoodi Battalion disappearing in a cloud of dust beneath the setting sun. It was time to set about reorganising the town.


The Revolutionary forces had just reached their exhaustion point (13SP), by which time, the Government's had got to 15SP lost - all 3 rifle companies having lost all their SPs. There was no disguising the victory for the Revolutionaries in their first major action.

From this action a couple of points emerged that might affect the handling of future actions.

1.  Pinning (in this game, pinned units were marked by a red counter).
Under the present system, when a unit takes a damaging hit, it becomes pinned. If it is in contact with an enemy it can fight, but otherwise not move or initiate a close combat. It can 'unpin' if not in contact with enemy, but neither move nor fire.  If the enemy remains in close combat - which becomes permanent if the enemy also becomes pinned - there is no way to 'unpin', and all hits become SP losses. That is how 'A' Company disappeared so quickly at the end of the action. 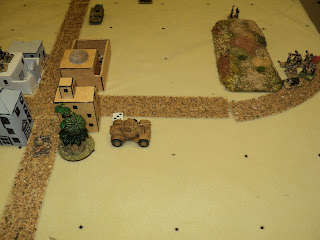 I am very tempted to drop the 'pin' feature altogether. This can permit the development of running fights or offensive drives. The pin feature also tends to discourage accepting SP losses in lieu of retreats in order to sustain an attack.

An alternative might be to change at least one of the rules concerning pinning.
- A pinned unit may fire or fight a close combat at reduced effect, but may not initiate a close combat.
- A unit that loses a SP and becomes pinned may in the same turn retreat one square provided that retreat takes it out of contact of any enemy.

2.  Machine-gun armed vehicles.
The Revolutionaries in this action had from somewhere acquired a Light Mark VI tank, light armour armed with machine guns only.  I used it as in effect a fast moving mobile machine gun.

Now, I hadn't really thought about it before, but other AFVs usually (though not invariably) also carry machine guns. Although the Daimler armoured car did engage it light tank with its 2pr AT gun, it did no more than scratch the armour. After that, I decided to use the car also as an MG platform in an effort to hold back the Rebel attacks on the right flank.

I have decided that in future all MG-carrying AFVs can act as MG carriers, but, in any given game turn, can fire its main gun OR its MGs, and not both.

To be continued:  The battle for the Provincial Capital.
Posted by Archduke Piccolo at 9:14 PM