In the wake of recent postings of simple naval wargames for battleships, I have been reviewing my 20th Century warships, and was reminded that I had some years ago begun laying down some destroyers, more or less, roughly and around about to scale.  Approximately.  I hadn't progressed very far: only one haing anything more than the hulls done.

Over the last couple of evenings I made further progress on them.  They're pretty crude, as the pictures will reveal... 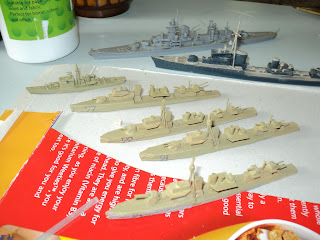 There you go.  Four destroyers of the WW2 German Richard Beitzen type, made from cardboard, balsa, plastic tube, pins and assorted junk.  The hulls were made from thick cardboard, not the best material to use for that purpose.  They have my own numbering: Z91, Z94, Z97 and Z99.  Just because. 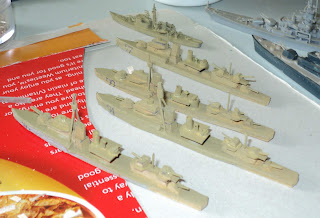 The little chappy alongside the four is from an actual kit (Tamiya, or Hasegawa, possibly). It came with a submarine and a four-engined US bomber. It's a Japanese submarine chaser of WW2.  Compared with the destroyers, it is way over-scale, so will probably count in my navies as a very small, lightly armed destroyer.

In the distance is a Matchbox kitset destroyer from which I modelled the smaller versions.  Alongside it is the heavy cruiser Prinz Eugen (Airfix, I think), a fine looking vessel, but hard to figure out a use for at the moment...

The question now is, whether the destroyers can be slotted in to the simple naval rules already laid down, or perhaps a new set needs be created.  At that I still need to put together a destroyer or two to go with the Yamato battleships and the Iowa.  The odd cruiser wouldn't go amiss, neither...

One rules idea that has crossed my mind is to play the wargames on the points (corners) of the hexes, rather than the areas, but adding the centre points of the grid areas so as to form a kind of smaller grained grid area.  It will require modifying my board to include the centre points of each hex.  Might have to play test this idea.
Posted by Archduke Piccolo at 3:58 PM