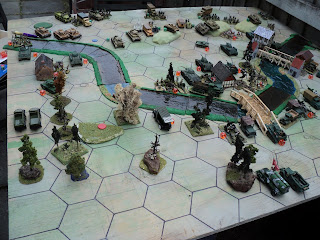 By mid-morning of 18th July, 1943, the Soviet attacks out of the Kozhevnya bridgehead seemed to be promising great gains. Before Dmitrievka, at the north end of the line, Soviet infantry attacks, with tank support, had largely cleared the ridges, though German StuG assault guns still sat upon the trig points 141 and 143. Heavy losses to I/6th Motor Rifle Battalion prevented their following up, and II/6th, left at the tail of the column as the 6th Mechanised Brigade crossed, was too far off just yet to throw its weight into the fight. 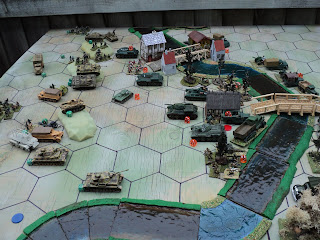 The Germans recovered quickly. At once 79th Panzergrenadiers retook the heights, whilst anti-tank fire from the StuGs criss-crossed the plain towards the town. Both 1st and 3rd T34 Companies of 6th Tank Regiment lost many tanks; and I Rifle Battalion was reduced to less than 20% of its strength (1SP remaining from 6). The 1st Medium and light tank companies of 5th Tank Regiment had also taken heavy losses, what remained of the former being early on forced back into the bridgehead. (In the above picture I count at least 12SP lost to the Soviets; the Germans, maybe two or three). 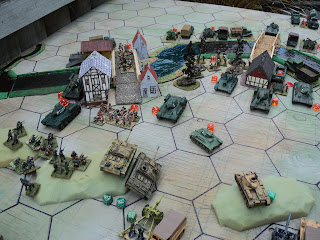 The light PzII tanks of 2nd Panzer Regiment also occupied Pt 138 betimes, before the Soviets could take advantage of the Germans failing to seize the feature earlier.   Not that that move discouraged the Russians.  The lead company of SU76 'Голожопый Фердинанд'* assault guns having traversed the bridge and the village of Kozhenya, raced across the plain, joining the 2nd T34 Company of 5th Tank.  In a trice they shot the light panzers off  Pt138, whereat the SU76 company followed up. 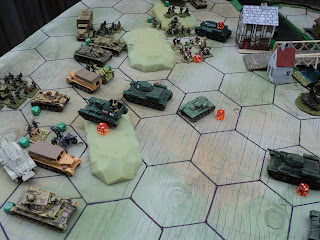 There below them lay the German gun line, which at once came under assault. Unfortunately for the Russians, the 5th Brigade Rifle battalions failed to stir from their bridgehead positions - a fine moment to cement their success had they done so. To the right, a fierce battle continued to rampage back and forth over the ridge, the Germans for the second time giving up Pt141. II/6th Rifle Battalion with tank support cleared half the high ground, but without managing to take the Pt143 objective point. 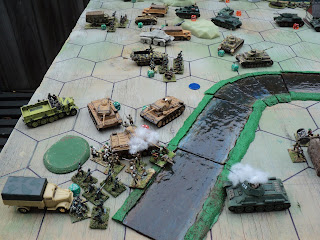 Meanwhile a private little battle was taking place on the southern flank. Faced only by the 2nd Panzer Company, II/4th Rifle Battalion forced their way across the river helped by supporting fire from the armour. Tank losses mounted on both sides, 1st Tank and 2nd Panzer Companies both losing all their tanks. First and 3rd Panzer Companies were also somewhat reduced. Though it took a little time, II/60th Panzergrenadier Battalion joined the combat. For all the strength arrayed against them, though, the Soviet riflemen proved stubborn defenders.  It took all day to drive them out of their small bridgehead.

In the distance II/2nd Panzer Battalion, followed by I/60th Panzergrenadiers, were moving up beside the river bend. Occasionally shooting across the riven at the 4th Tank vehicles, their focus tended more toward events developing in the centre, towards the main bridgehead. Swinging around the end of Hill 138, the PzIVGs of 5th Panzer Company engaged the flank rear of Russian medium tanks some distance to the north. 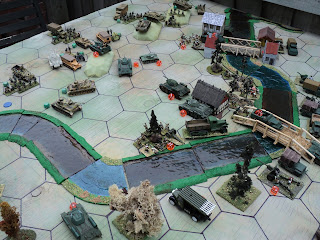 An aside is indicated here, I think. Although a target's facing is critical for close assaults, under the DPW rule set, it is not for shooting - especially anti-tank shooting. Now, I appreciate that in this action the ground scales have been fudged more than considerable, but even so, it raised the question of anti-tank shooting at an enemy facing the wrong way. It seems to me that flanks and rear of units should still be sensitive to incoming from a flank. It was just a thought; I made no change to the rule set as written.

What led me to this was the German counter-attacks mounted against the Russian central thrusts.  Fifth Panzer Company approached a body of Russian armour (3rd Coy, 6th Tank Regiment, which had strayed all the way southward from Dmitrievka to before Point 138) from the latter's left rear.  At the same time attacks by StuGs from the other flank, and a direct counter-thrust by the PzIIs of 4th (Light) Panzer Coy, flung the SU76 group off Pt138.  But not before both German artillery battalions had lost some of their guns and crews. 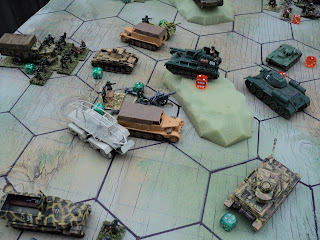 The Russian armour nevertheless reacted effectively against the flanking PzIVs. Though losing some tanks as they turned to face the PzIVs, Russian tank gunnery proved more effective than the German. As the PzIVs climbed to the summit of Pt138, they left behind them three quarters of their strength burning and abandoned. 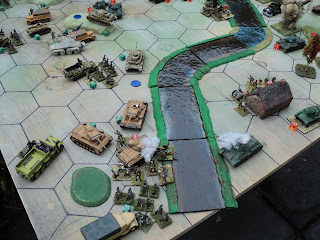 The remaining pictures of this posting depict the overall situation at about mid to late morning. At the southern end of the line, a Panzer (I/2nd) and Panzergrenadier (II/60th) had contained but were still struggling to shift II/4th Rifle Battalion from the west side of the Mius. 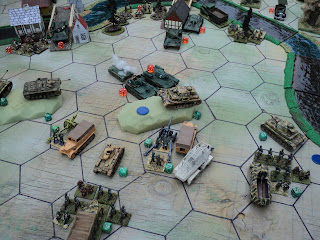 In the centre, the Germans had almost recovered Pt138, but at the cost of the better part of a powerful PzIV company, and half the artillery.  The Russian armour was still maintaining itself in their forward position, though under pressure from three sides. 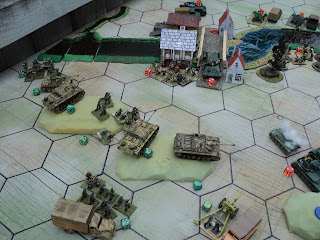 On the German left, the Germans had finally and definitively repulsed the Russian attacks on Pts 141 and 143.  Now was to begin a general German advance of assault guns, 515th Infantry Regiment and 79th Panzergrenadiers against the town. 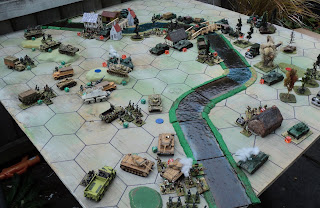 To be concluded... Will the Germans after all eliminate the bridgehead, or will a resurgent Russian army break out after all?
* 'Голожопый Фердинанд' - 'shortarsed Ferdinands' - an ironic allusion to the huge German 'Elefant' or 'Ferdinand' assault guns.
Posted by Archduke Piccolo at 11:10 PM