Gradually Paul 'Jacko' Jackson and I have been developing an 'East African' campaign modeled very loosely upon the Eric Knowles Madasahatta campaign of yore.  A simple map has been drawn up on a hex field, with the idea of using the campaign mechanics outlined in Bob Cordery's Portable Colonial Wargame.  At the moment the powers involved seem to be: 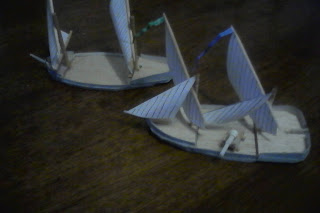 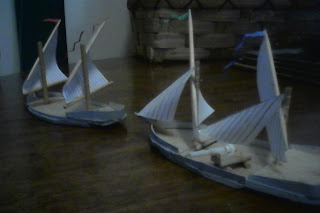 It seemed to me that the last of these might have some sort of naval presence, hence these vessels I made over the weekend.  The photography that accompanies this posting is from my phone.  Vaguely dhow/ felucca/ polacre/ settee type vessels.  The tiny breechloading cannon is freestanding, if ever they need an armed  vessel.  Eventually at least one more vessel will be added to the Zanzingabar fleet.  According to the PCW system, these vessels will have a carrying capacity of 8 army strength points each (length 10cm, beam 4cm), unless one is a war boat carrying the cannon, which will reduce its carrying capacity to 4SPs. 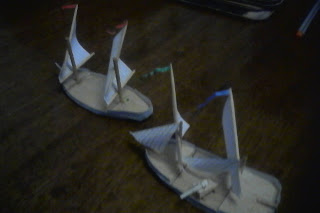 Posted by Archduke Piccolo at 3:55 PM