A Dark Day in Darkest Aithiops... 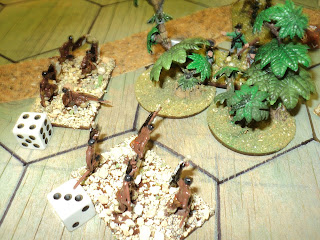 This posting is a hard one to write. Did you ever have a day - or even a sequence of events - that started bad, and you knew it was going to start bad, but it carried on bad - unrelentingly bad - and ended bad? Observe the use of the adjective in place of the adverb. Ever had one of those? Chief-King Barra Kuta did. Did he what!
Following his repulse from the Azeitonian column at the edge of the jungle, he drew his army off up the Limpopo River trail towards the market town, Kachinga, which lay at the confluence of the north and south branches of the Great Grey-Green Greasy Limpopo River. Perhaps the wound received at the battle had impaired the Chief's faculties, or left him tired.  The retreat was slow and as early as noon the next day, the colonialists caught up with the m'Butu on the road. It was probably as bad a stretch of country as could be imagined to face a foe superior in numbers, firepower, technology - and even had an edge in mobility. Here the country was flat - several casual undulations of ground, and hardly any scrub, brush or trees in sight. There was no question but to accept a hopeless battle - and hope for the best. 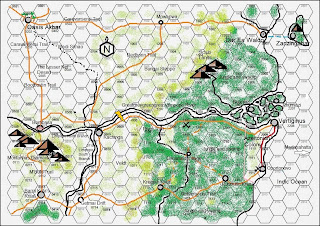 This was one of those occasions that crops up in a campaign in which the outcome of a battle is certain, right from the get go.  It then becomes a matter of how bad it's going to be. The first battle had ended the Azeitonian run of activation cards (Red), but the m'Butu drew one Black card only, a number, which gave it one grid area of movement for one force.  Barra Kuta's army drew back along the road one space. Back to the Red cards: n, K, n, n, n. Unlike the number cards, the King allowed 5 (!) activations, which could be used all by one force, or shared among as many as 5 forces.

Now, rather than make the moves card by card, I proposed drawing the cards as 'strings', ending when the colour string ended by the appearance of a card of the other colour.  At a slight reduction of the 'fog of war', it does speed up proceedings. But nine activations -  no wonder Tenente-Coronel Relaxado's expeditionary force ran down the m'Butu. 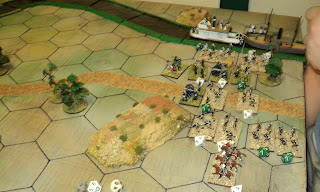 Meanwhile, far to the south, a secondary colonial force penetrated the jungle west of Oportonovo, following a trail that soon led to a small, palisaded kraal. A reconnaissance indicated the presence of a small garrison (1 warrior stand). The Azeitonians declined for the moment to press the matter.  Meanwhile, the garrison, alerted to the presence of the enemy, were for the moment unable to determine their strength (having to wait for an activation card to carry out the recon). 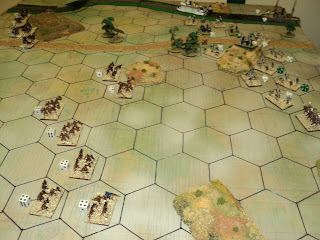 Events were developing far more quickly along the Limpopo trail. Chief Barra Kuta threw out his line in much the same formation as he had to begin the earlier battle. As the Azeitonians approached in a broad column, he hoped that by enveloping its open flank he might do something to offset the disparity in numbers. There was no question of defending. He had to carry the fight to the enemy.

It did not go well.

The m'Butu army comprised 11 warrior stands plus the Great Man's entourage - 12 units in all: 50 Strength points all up; exhaustion point 17. As Barra Kuta counted as a brilliant commander, he might activate 6,7, or 8 stands per turn.

The Colonists were far more powerful, though their cavalry had been halved by the previous day's action. Their strength points had been reduced by 10 to 82, exhaustion point 28. He had available 20 units - 1 cavalry and one infantry stand lost, plus a couple reduced to 3 SPs, - so, the Colonel counting as an average commander, could activate 9,10 or 11 units per turn.

Now, to the ground.  As my table is rather larger than uses for examples of Bob Cordery's terrain generation method, I made certain adaptations.
Now, the river and the road/ trail, were a given. The river was placed first, but the road could wait upon the rest of the terrain. This was flat grassland, so any rises in the ground were merely casual undulations - enough to create dead ground.

The large rise at the upper left seems somewhat to exaggerate the size of that rise.  It began as a 2-hex hill, but another appeared right beside it, to extend its size.

Patches of bush/ scrub:
The method was the same.  This time the 2D6 + 1D3 roll gave us 1+1+1 = 3 such patches.  You can see the extent to which the Fates, the Gods, Karma, and Providence had it in for the m'Butu, eh?  Man, what a miserable piece of country when you have nothing - nothing at all - going for you!

Hamlets/ Villages:
To determine whether there were any, I figured that, as this was a fairly sparsely populated country, I'd stay with 'the book' on this.  The D6 - 3 roll was a '2', so there was no habitations.

The Road/ Trail:
I simply laid down close by the river as seemed sensible.

Figuring that to close with the enemy (if they could not retreat betimes) would be better than to stand about to be shot to pieces, the m'Butu advanced rapidly to close the distance. Losing several SPs in the process, they found they could do little better in the close quarter fighting. They were completely outfought all day. Unfortunately I failed to take any pictures of the actual fighting, but an after picture might at least partially tell the story.


The attack failing to make the least impression, the m'Butu fell back, close to their exhaustion point. Nor was that withdrawal to remain unmolested. Although they managed to put some distance between themselves and the enemy, not a few could not get beyond rifle and artillery range. And the colonists' shooting this day was desperately accurate.

This was a terrible defeat for the m'Butu - a massacre, withal. As the m'Butu dragged themselves from the field they mourned (well, I did) the loss of 20 Strength Points. The Azeitonians had lost precisely two.

Now the battle losses, as before stated are divided in 3 -
Rather than dice for the remainders, I find it simpler to form the losses into a species of palindrome.  The single remainder goes to the delayed replacement; two remaining will go to 1 permanently lost and the other immediately replaced.

The net effect of this 'battle' was that the Azeitonians lost exactly one SP.  The m'Butu lost 7 outright, 6 to be returned later, and 7 returned immediately - a loss for the moment of 13SPs, on top of the 16 lost the day before. That there would be 14SPs available some time in the future was small consolation to Barra Kuta.
At this point in the campaign, recall that the Azeitonians still had 4 campaign moves to play. Strictly speaking, they could probably carry out a recon, then attack along the road, drive the m'Butu into Kachinga Town, to finish the outstanding moves with a reconnaissance. It would simply have been a pressed home pursuit of a defeated enemy. The drawback to this would have been that, handling the m'Butu, I would simply have refused battle, and drawn off the remnants of the army.

So Paul and I negotiated the subsequent events, allowing the m'Butu to retreat all the way into Kachinga. That saved the Azeitonians a campaign move, which meant that they could, after a successful recon, end the sequence with a battle. To make absolutely certain this was to be a great day for the Azeitonians - and an utterly miserable one for the m'Butu - their recon roll was a '6'. Of course it was. One suspects a local entrepreneur in this market town wished early to ingratiate himself to these enterprising strangers...

Chief Barra Kuta had left a small garrison in the place, 2 warrior stands (8 SPs). Added to what was left of his field force, brought the m'Butu strength up to 45SP, as follows:

To be continued: The Assault on Kachinga.

Posted by Archduke Piccolo at 5:30 PM