Following up the successful action at the Falsover River on 28 April, the French Corps under Marshal Dubonnet marched rapidly eastwards, hoping to reach Berlin well within the fortnight. After the hard fought battle for the river crossing, the French encountered minimal opposition that faded away to nothing before the week was out. Indeed, the enemy seemed entirely to have disappeared, the 9th Hussars' scouts losing contact at the beginning of May. What did that portend?

The Prussian commander, Paulus von Jaxen, might have lost the battle, but he was not to be beaten so easily. Outnumbered as he was, he could not hope to hold the French for long in a frontal battle. Casting about for some means to equalise the disparity in numbers, he began to edge his forces away to the southest, instead of directly eastwards, and kept a wary eye out for any opportunity that might present.

Marshal Dubonnet took a direct approach. Let the enemy bring on a battle: the advance upon Berlin would surely bring it about. Keeping his cavalry busy scouting ahead and to the right flank, he marched rapidly eastwards, alongside the River Havel. Early on the morning of 4 May, after the previous day spent traversing what seemed to be ideal ambush country, his leading troops were passing through Uszublunder towards more open country beyond. It seemed to be another peaceful morning's march.

From a halcyon hike to the volleying of orders to meet a sudden threat was a matter of minutes. Scouts espied Allied troops to the south bursting through Gross-Huntersdorf and nearby Muttschullen; the foot and guns swung southwards to meet threat; the French cavaly and light infantry companies had already been deployed to guard against just such an eventuality.

As the French army busked itself for the coming fight, Dubonnet's cartographic engineer scribbled down the following sketch map (the unit numbers were added in later). 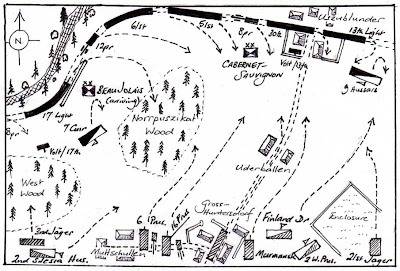 The situation at the outset can be discerned in the following pictures:
The view from Beaujolais's 2nd Division, towards the village of Muttschullen. Heading towards the West Woods are the 3rd Jager, behind the 2nd Silesian Hussars prepare to move off eastwards, possibly into the defile between the woods. On the other side of the village, 6th and 16th Prussian Infantry are advancing rapidly into action, accompanied by the two Allied 9pr companies. 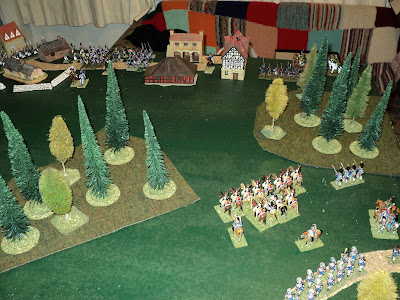 The following picture shows the other end of the Allied line. The Murmansk Infantry are marching straight through Gross-Huntersdorf itself, Astrakhan Grenadiers passing east of the place. Close by the Finland Dragoons are being followed by the 2nd West Prussia Dragoons, with the 21st (Russian) Jager forming the right flank of the line. 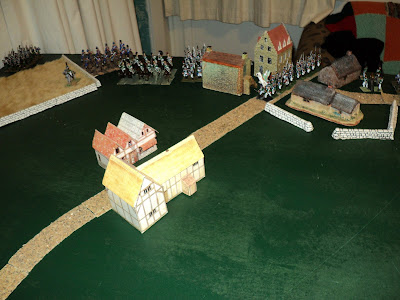 A general view of the field from the North-West... 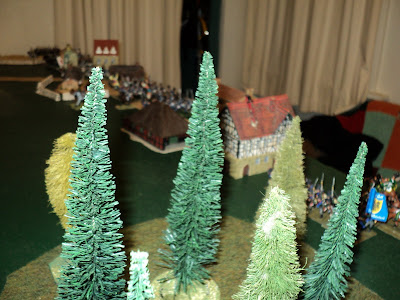 ... and one from the Southwest: 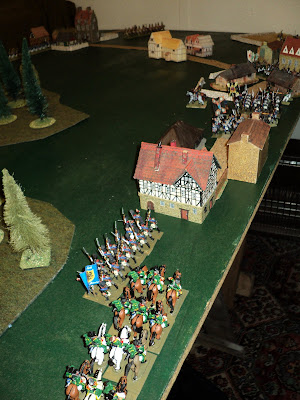 Clearly, Von Jaxen's plan was to hit the French on the march as hard as he could whilst they were still strung out along the road. Could the French react betimes?

Superior by 3 to 2 in horse, the Allies were badly overmached in the other arms. The French had
5 Line Infantry,
2 Light Infantry (24 figures apiece);
3 Cuirassier Squadrons,
3 Hussar Squadrons (each of 4)
2 8pr companies,
1 12pr company.

It would be a tall order for the Allies to overcome their formidable and more numerous opponents. General von Jaxen was determined to try...
Posted by Archduke Piccolo at 8:30 PM