The scene was set, if the script unrehearsed,and the actors rushed towards centre stage. In the face of imminent attack from the south, the French units began to swing off the road and deploy. Leaving its Voltigeur company lining the stone walls in the southwest quarter of Uszublunder, the remainder of 13th Light passed through the place and drew up immediately to the east, where they formed square alongside 9th Hussars. The immediately following 30th Line quickly manned the buildings and walls in the southeast quarter of the village and pushed forward the light company.
014 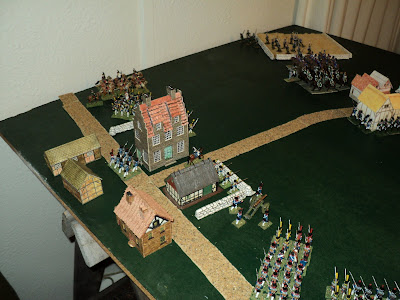 The 1st division artillery deployed outside the village close by the 13th Light Voltigeur company, sooned joined by the battalion column of 51st line, with the battle line of the 61st extending Cabernet-Sauvignon's front somewhat short of the Norrpuszikat Wood. Into this gap clattered the 12-pounder guns of the Reserve artillery.

Behind them on the road, Beaujolais's 2nd Division had arrived on the field.
010 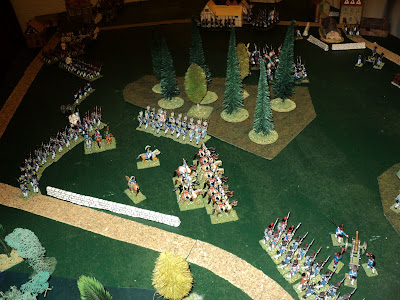 Seventeenth light had interrupted it's march to advance upon Norrpuszikat Wood, whilst 34th Line marched on to draw up upon the left flank of the 17th Light. At the rear of the column, 88th Line formed line facing the West Wood, covered by the Divisional artillery, 7th Cuirassiers, and the 17th Light Voligeur company just within the trees fringing the west Wood.

Meanwhile, the Allies were surging forward all along the line.
011 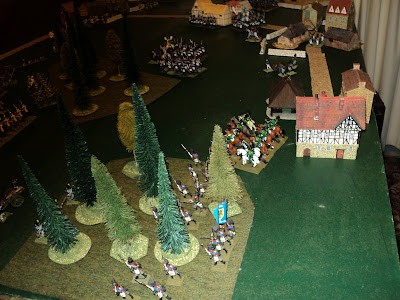 The Prussian jager plunged into the West Woods where they were to prove for the rest of the day a considerable nuisance. The lonely Voltigeur company of 17th Light facing them were soon joined by that of the 88th Line, but in the face of greater than 2 to 1 odds, drew back out of the trees. The former made off to rejoin their parent unit, by then moving through the Norrpuszikat Wood; the latter rejoined its own unit.

In the centre, the Prussian Line Brigade passed close by Norrpuszikat Wood hoping to overrun the French 12-pounders...
012 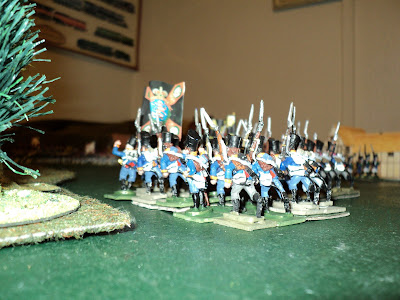 ... whilst the Russian Brigade had seized Uderballen. On the east flank, the Allied Dragoons cantered forward between Uderballen and the enclosure, with the French 13th Light patiently awaiting them in the distance.
013 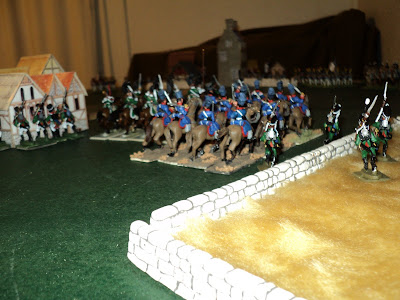 The action developed in the east to begin with.
020 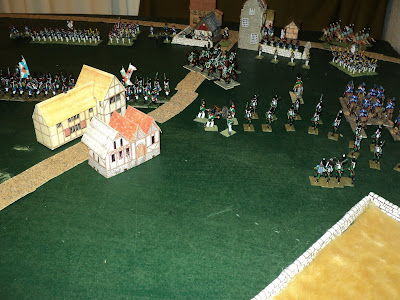 In the face of the mass of Allied Dragoons, 9th Hussars evaded the enemy charge. Declining to press the matter here with cavalry, on account of the 13th Light Infantry battalion square, the Allies brought up the 21st (Russian) Jagers to pepper the French line. The Finland Dragoons instead swung westwards across the face of the village, the French 8pr battery firmly in its sights.

It was at this time, near the West Woods, that the remainder of Beaujolais's 2nd Division was deploying to face the woods. The 34th Line marched on to join 17th Light in the battle for the Norrpuszikat Wood, ranging up on its left.
015 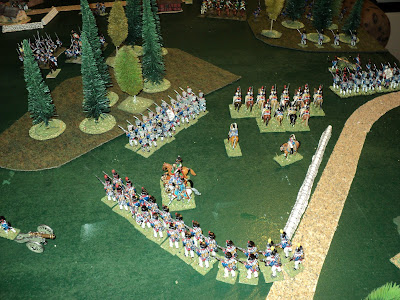 The rear of Beaujolais's column, the 88th, drew up alongside the 8pr battery, which had given up its watching brief down the defile and now faced the West Woods, within which enemy Jager were expected at any time to appear.
018 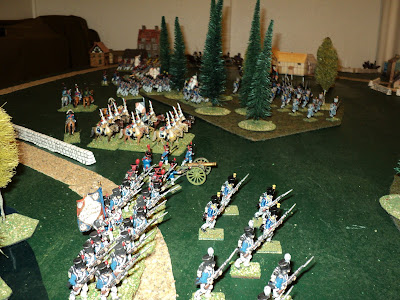 As it happened, the threat from the Jager developed very slowly. Beaujolais was able eventually to pull the 17th Light Voltigeurs out of the line and send them off to rejoin their parent unit by then in action in the Norrpuszikat Wood. The Prussians got somewhat the better of a brief and indecisive exchange late in the day, and successfully tied down superior numbers, but for the most part there was little action in this part of the field.

The Allies having opened the ball on the eastern flank, it was the French who initiated proceedings in the centre. The Reserve Artillery soon enough dropped into effective action near the woods, and opened a galling fire upon the 16th Prussian Infantry.
016 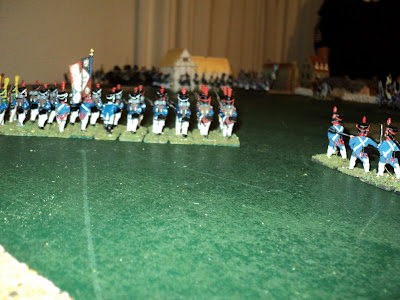 Shortly thereafter, three companies of 17th light lined the edge of Norrpuszikat Wood and opened a short range destructive fire upon the other Prussian Line infantry.
017 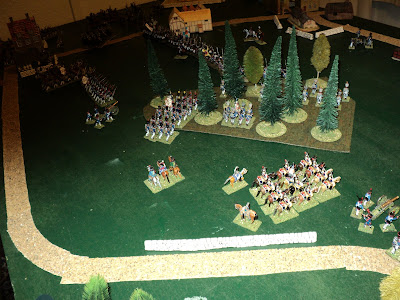 But the Prussians had been awaiting just such an action. The carefully loaded first volley shredded the French lights as much as the trees and undergrowth. The short range skirmisher fire was just as destructive, but the Prussians proved the better able to withstand the pressure. The French skirmishers soon faded back deeper into the woods.
022 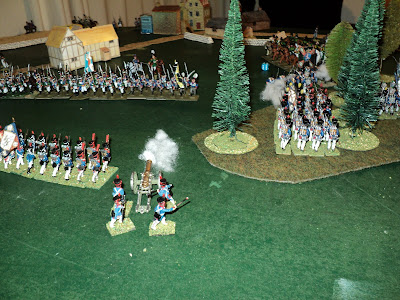 There was no respite for the 6th infantry. As the French Lights disappeared into the tall timber, out came the battalion column of 34th Line, smashing into the northern end of the 6th's battle line. Somewhat disordered by the passage through the open woods, the French attack was less effective than it might have been, but the Prussians staunchness was nevertheless sorely tested. Hanging on by their toenails, the Germans refused to yield. After a tough, protracted fight, they were again victorious, and saw the second attack recede into the forest. Yet it was a much reduced regiment that congratulated itself upon its valiant defence.

Meanwhile, the action was developing apace between the Wood and Uszublunder village.
021 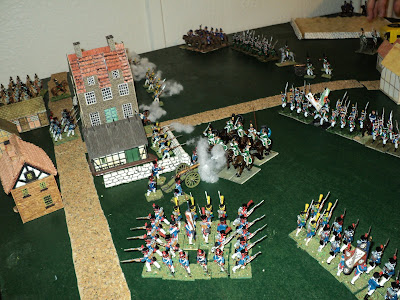 Braving the popping fire of the 13th Voltigeur Company and elements of 30th line, the Finland Dragoons drove on towards the French battery deployed close by the village. Fifty-first Line hastily formed square, but the artillerymen rose to the occasion. Already somewhat reduced by the incidental incoming fire, the Finns found the canister fire too much, and made off hastily, half their numbers remaining on the field.

But now the climax of the action was approaching. [Unfortunately this was when my camera chose to let me know the batteries were dying].
023 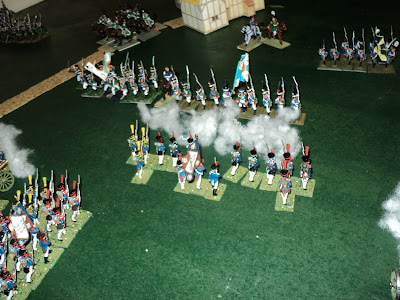 The Prussian 16th Infantry having been driven back with heavy loss by the Reserve artillery, Cabernet-Sauvignon ordered forward the French 51st and 61st line against the approaching Russians. The 61st closed to within mere paces of the enemy before both sides exploded into action with devastating opening volleys. Scything each other down in windrows, within minutes the Russians were reduced to half their numbers. But the French found they had to do with the same infantry that had caused such trouble in the Falsover action: the Astrakhan grenadiers. Somewhat outnumbered, battered by artillery, the Grenadiers fought magnificently. They gave at least as good as they got - inflicting some 45% of their own numbers upon the enemy. But the French musketry was no light ordeal for all that: a little over 40% of their own numbers told upon the Russians. All the same, the appalling carnage was too much for the 61st Line, who broke first and ran back to the Uszublunder highway. Almost as badly shaken, the Russians also fell back, though precariously maintaining their order.

As this mutual slaughter drew to a close, the 51st Line thought to try conclusions with the Russian Murmansk Infantry. The Finland Dragoons having been seen off, this French unit had resumed its column formation. Meanwhile, the Murmansk Infantry had been advancing into the teeth of a telling French artillery fire. Perceiving - or imagining - that the Russians had been somewhat shaken by this artillery barrage - (I have no 'shaken' rules as such, but it is a way of interpreting the state of a unit that has taken losses in figures) - the 51st Line Infantry swung impetuously into the fray. Now the Russians could avenge their losses. In the teeth of an effective short range volley, the Frenchmen closed the range. In the ensuing close quarter fight, the Russians barely managed to contain the superior French numbers. The column was halted, but no more. Murmansk Infantry, still presenting a bold front, felt themselves compelled to drop towards Uderballen.
024 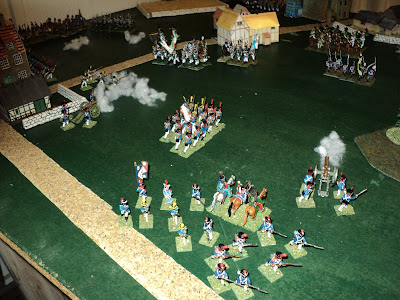 By now the Allied assault upon the French line had faded away. There were no reserves upon which von Jaxen could call. The Allied line infantry had taken a fearful beating, mostly from the galling French gunfire (the Allied artillery had been largely ineffective all day). Of some 4000 infantry that formed the Allied centre, rather fewer than 2000 remained with the colours. Emboldened by their success in the centre, the 9th Hussars thought also to try conclusions with the Prussian Dragoons, which unit had been somewhat weakened by musketry from French infantry emerging from the village.

This clash of arms was to be the closing action of the day, and served perhaps to hasten the Allied retreat. Inconclusive as it was - honours were shared - the Prussian horse made of hastily, though the French Light Horse were glad to call it it a day.

Overall it was a fearful butcher's bill for both sides, though if Dubonnet's Corps appeared more than a little worn, von Jaxen's was looking very ragged. Against French losses of almost 1000, the Allies had 1800 to deplore, 450 of them prisoners [this translates in my campaign rules from the Prussian loss of 54 figures (and a lost battle) to the French 39].

For all that, the Allied commander had some grounds, if not for satisfaction, at least to find a silver lining. His army was still in being, and, according to dispatches received from Prinz von Blucher's headquarters near Leipzig, he might expect reinforcements sometime in the next few days. In the meantime, he had delayed the French advance for 24 hours - and a day might be all that was needed to turn the campaign around...

For more pictures, check out the 'Painting little soldiers' link to the right of this column...

Meanwhile, the cognoscenti might recognise in this action a scenario similar to that in East Prussia confronting the General Lehwaldt in August, 1757, faced with an invasion by much larger numbers of Russians. In obedience to emphatic orders from his master, King Frederick II, Lehwaldt brought the Russian Army into action at Gross-Jagersdorf...
Posted by Archduke Piccolo at 2:06 PM