The following encounter was another play test of a simple wargames ruleset for non-wargamers, part of a range called One Man, One Gun. The set I used was slightly adapted for the 18th Century period. In this particular game, I was testing a rule that required a full move to (re)load a firearm. The officers and men were all assumed at the outset to have loaded pistols or muskets. 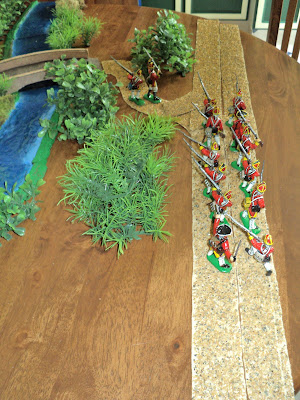 Summer, 1778; the British are camped outside of Charleston, awaiting the order to march. Lieut. Banastre Mirleton had been leading every evening for the last week a strong patrol down a seldom-used trail leading off the old wagon road not far from the encampment. Nothing seen so far, Mirleton was not expecting trouble this time either. Two men preceded the main body of the patrol by several yards (A FULL 6" road move). The rest of the patrol walked, rather than marched, in file, Mirleton himself in the second rank, Sarn't Charlie Higginson bringing up the rear Reaching the trail, the patrol swung off the wagon road, plunging into a tract of country overgrown with brushwood, low bushes and thickets - the usual reversion to nature of hardscrabble farmland abandoned some years before. Not far into this wilderness, the patrol crossed a small steam, Conrad's Creek, over which spanned a stone bridge, little used but still in well preserved condition (how to praise your own scratchbuilt terrain pieces with seeming to do so!). 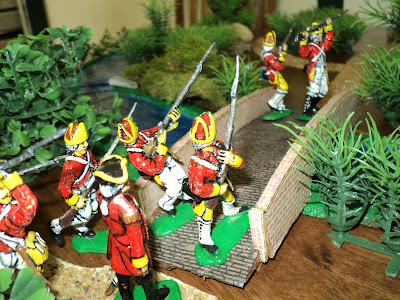 Today was not going to be like the previous 6 days, however. For lurking within the undergrowth, Sergeant Eugene Wappcapplett had arranged for the oncoming Grenadiers, a very warm and cordial welcome. Splitting his 9-man squad into three sections, he placed one close by the creek, and another a short distance off, both on the right hand side of the trail as it passed through a clearing. Beyond the clearing, the road bent sharply enough to the right that anyone standing behind a conveniently placed pile of old logs would not be seen until a traveller had fairly turned the corner. 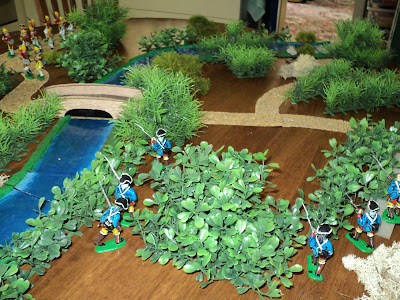 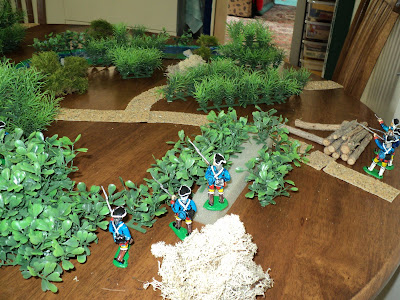 Without incident, the Grenadiers crossed the bridge and entered the clearing a short distance beyond. When the 'point' pair reached the split in the trail, one moved along a semi-overgrown trail beside the creek a short distance, the other continuing along the main route. Then they paused, as Mirleton ordered forward a man to join each of his scouts. The main patrol, now ten men, waited a few moments, then the whole advance resumed. 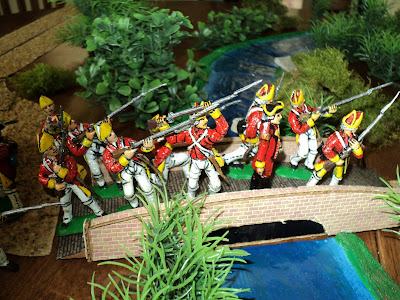 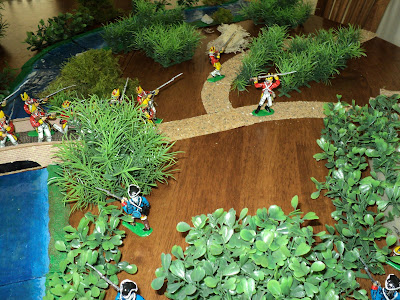 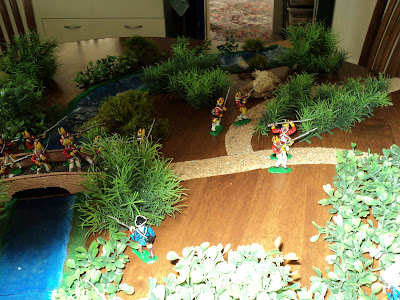 The advance had barely resumed when Mirleton's patrol and the pair on the Creek Trail heard the commotion erupt further along the main trail. The lead Grenadiers, rounding the bend, spotted the Continentals at once (needed a five or six, rolled a five). 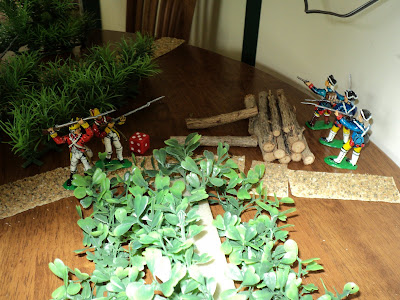 The Yankees promptly let fly at long range, whereupon the two Grenadiers, glad not to have been any closer, without reply hastily drew back around the corner. 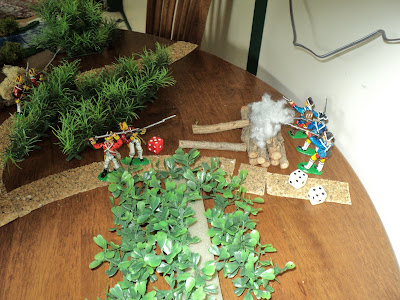 Just as Lieut. Mirleton's attention was drawn to the scouts rejoining the main group, a sudden volley erupted from the right of the trail. 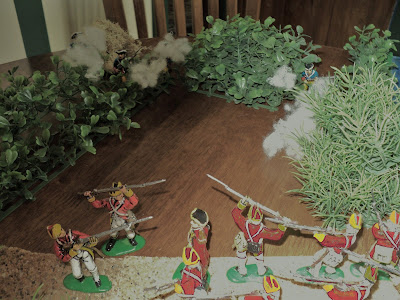 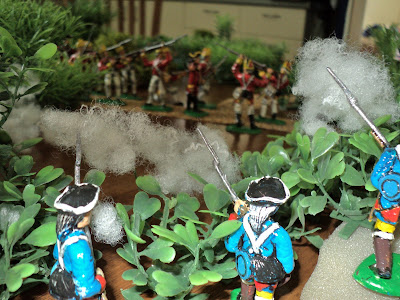 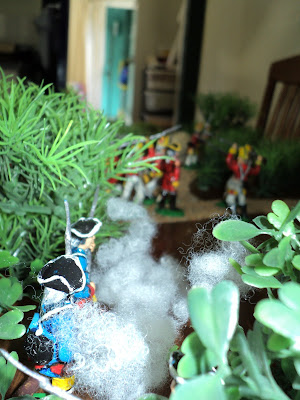 The extent of the clearing meant the the shooting was at long range, yet it was effective enough. Two Grenadiers fell (who, was decided by die roll, and it happened to be the two standing just behind the lieutenant). 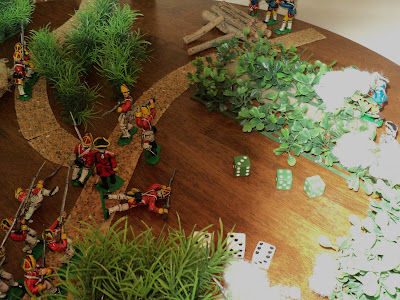 First blood to the Americans! But as they frantically began to reload their weapons, the Grenadiers could be seen shouldering their own muskets for the return volley.

We shall see the outcome of the rest of the fight later on...
To be Continued...
Posted by Archduke Piccolo at 2:10 PM