The Barricades of Zerbst

The following is a brief narrative and background to events leading to a conflict between the the Wholly Romantic Emperor Marinus-Violoncello and the Herzog Constantine II of Rechburg. The campaigns you will be able to follow on the Herzogtum von Rechburg blogspot, and its sub-title Ulrichstein Campaign. See the list of My Favorite Links to the right of this column.

The blissfully peaceful aspect of the Bishopric of Ulrichstein, over the eighty-nine years since the treaty of Westfalia put a term to the 30 Years' War, hid a turmoil of inner conflict. Already populated with a Protestant religious majority, especially in the north, the Bishopric remained under the terms of the Treaty nominally Catholic. The Emperor of Trockenbeeren-Auslese stood as guarantor, even though this Diocese lay outside the Imperial frontiers. 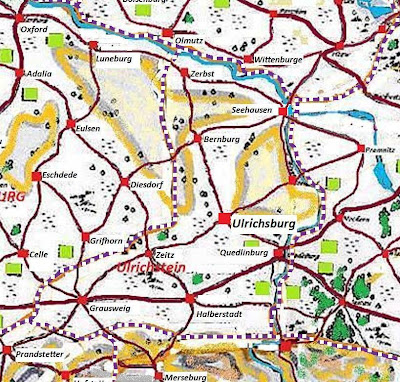 The position of such a small Principality gave it more importance than its size might have indicated. Lying astride the natural commercial routes between the North Sea ports of Rechburg and the Imperial lands, the burghers of particularly the northern towns saw ample opportunity to profit therefrom. With accretion of wealth came a distinct reluctance to part with the tithe of it to ecclesiastical rulers, especially as much of it seemed to go to increasingly sumptuous statuary depicting the Mother of God. Many nouveau riche merchants found the iconoclastic Lutheran or Calvinist forms of worship more to their liking and inclination. 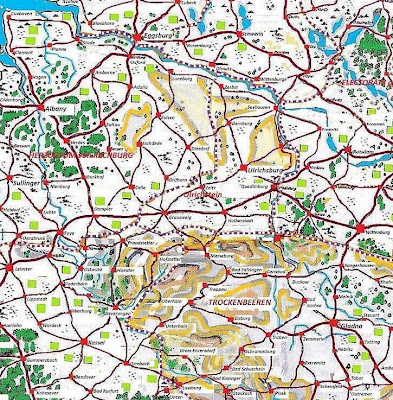 All this might have been borne, were it not for the terrible rains of 1737. The Elbow River flooded, the north-eastern arable lands were inundated, the corn crops failed. The resulting shortages might have been made good in many ways, but the merchant burghers of northern Ulrichstein saw, instead of local distress, opportunities for further profit by speculating in the corn markets. Instead of filling the stomachs of poor townsfolk and rural peasantries, what corn there was lay in merchant warehouses, awaiting sale and removal to other merchants' warehouses. Such destinations lay as much outside as within Ulrichstein borders.

Many - including those who profited most from them - saw in the famine and distress a Divine Retribution for the sins of the State and its people. The Protestants blamed the Catholics for their idolatry and idleness; the Catholics saw the Protestants as unprincipled, Godless usurers. The pulpits of both sides of the Schism thundered and echoed to self-righteous evangelical invective.

At last, in the autumn of 1737, the patience of the hungry snapped. The shirtless of the towns, joined by desperate countryfolk, rioted, smashed the windows of the rich, and broke into their storehouses. Of course, such violence led to much of the grain being destroyed and wasted. Many merchants suffered cruel financial losses; the poor remained no better off.

So severe had the violence been in the far northern town of Zerbst that the good burghers of that place appealed to their ruler, the ageing and ailing Bishop Cornelius ter Plonck, to send troops - someone - to impose martial law. Now, the Ulrichstein military was little more than would be required of a comic opera army, comprising as it did the Diocesan Guard Infantry (its three companies called Grenadiers, Musketeers and Arquebusiers); the squadron of Diocesan Guard Hussars; and the company of Diocesan Guard Field Artillery. This was not a lot from which to select a policing force.

That the response was swift was due to the eagerness and surprising vigour of the Commander of the Guard, Colonel Freiherr von Smallhausen. All his life a Guards officer, expert in ceremonial and formal protocol, he had never seen action. Now was the chance to put into practice what he had learned in years of lamplit evenings studying the campaigns of the great whilst dreaming of glory.

Leaving behind the minimum numbers to fulfil their primary ceremonial function and to fire the salutes - the Arquebusier Company and a section of artillery - von Smallhausen was marching north within 24 hours of receipt of the request from Zerbst. Under command were 380 Foot (19 figures); 180 Horse (9 figures) and 3 guns (1model).

Yet even that short delay proved sufficient to erase from the memory of the virtuous townsfolk of Zerbst that the approach of the Ulrichstein Army was at their request. Somehow the rumour spread that Bishop Cornelius intended to profit from the unrest forcibly to bring Zerbst, and the rest of the Protestant north, back into the Romish faith. Though it is true that it had been a longstanding ambition of Cornelius to achieve precisely that, it was one that had faded much with his advancing years, and in any case never had he seriously considered the use of force to compass it.

Quickly the townsfolk organised a militia to defend the town, appointing as their leader one Ritter von Rancke. At the gates of Zerbst, Col. von Smallhausen was met by a delegation of the townsfolk's appointed leader with his drummer. 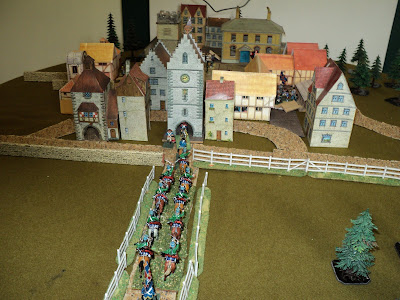 'You may not enter!' announced the soi-disant Marshal-General of Zerbst, 'We have barricaded the streets and fortified the Plaza. And you try to enter, we will resist you.' 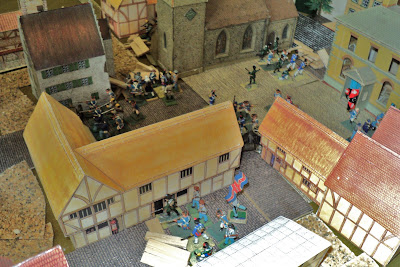 'Very well,' responded the Colonel, who desired nothing better, 'We shall be advancing at once. The consequences will be your responsibility.' 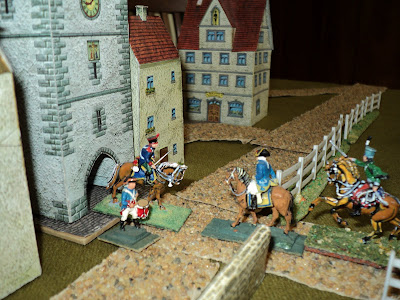 The delegation hastily withdrew; the Colonel made his preparations; the attack was on. 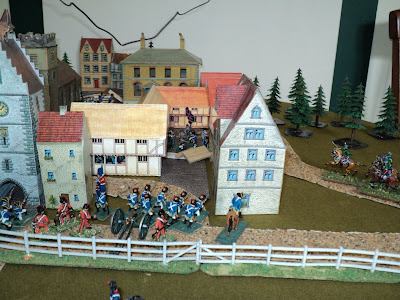 To be continued...
Posted by Archduke Piccolo at 2:04 PM