In a recent exchange on the Old School Wargamers' Yahoo group, under the thread title 'Appearance', I mentioned a bunch of Napoleonic figures I bought at a bring-n-buy four or five years ago. Several of them had the legend HOTSPUR stamped on the underside of the bases; there were other figures in the buy that were obviously crude homecasts that I managed to make something of.

One of the correspondents queried the HOTSPUR connexion, that outfit never (apparently) having produced Austrians - indeed its Napoleonics range I understand was never all that extensive. I did have some HOTSPUR French horse (Chasseurs and Dragoons) that I bought in about 1991 from an Auckland importer who sold Front Rank (I think it was), as well. I preferred the HOTSPUR cavalry as being close to the size of the Minifigs that I already had; the Front Rank figures being overweight ex-basketballers mounted on Clydesdales by comparison.

At any rate, I thought I'd show the figures here, with others in my Austrian Army.

To begin with: the alleged HOTSPUR figures:
13th Infantry Regiment. These are some of the HOTSPUR figures. Although I favoured helmets, I wasn't going to turn these down. I did consider doing them as Grenze - a serious want in my army - but didn't have the heart in the end. 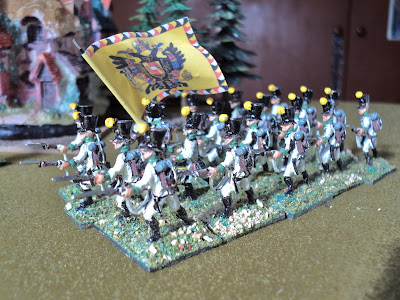 43rd Infantry in helmets. As in the 13th, there were insufficient figures for the full 24-figure unit, this one comprising just 18. 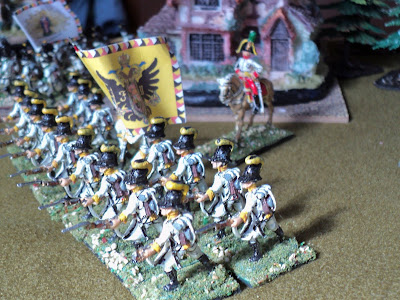 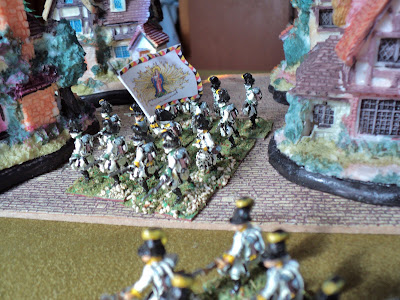 The following picture is of somebody's homecast figures - Bavarians he told me - that seemed possibly to be Hinton Hunt knock-offs. They did have some sort of 'HH' identifier stamped or etched onto the bases. They were truly horrible castings, but a fair bit of knife work got them to at least a half-way presentable state.
23rd and 12th Infantry Regiments march past. Bavarians they might have been intended to be, but they don't look too out of place in Austrian uniform. 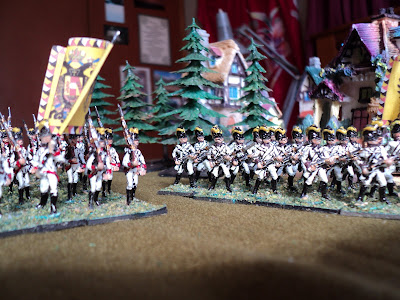 HOTSPUR again: the 10th Grenadiers and 13th and 43rd Infantry storming a village. The general officer figure, by the way, is an Italeri command figure. 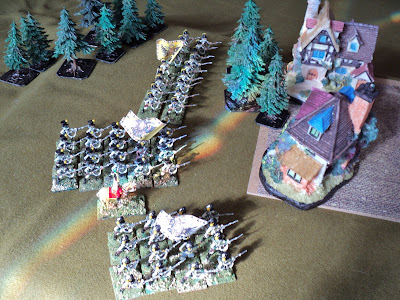 The following figures were also bought as a job lot. The light infantry are Minifigs 'Tyrolean Jager' painted up in the dark grey and red of a Freikorps Jager unit; the command group also Minifigs. But the Grenadiers and Line Infantry I can not identify. The Grenadiers might be Hinchliffe (or might not); but the others leave me at a loss.
Infantry Regiments 2 and 33 advance alongside the 2nd Grenadier Battalion... 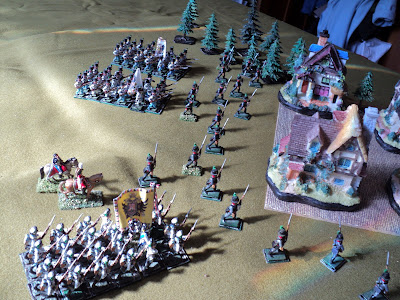 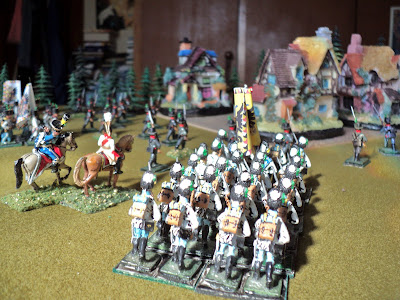 Closer view of the Hungarian line. As they were wearing shakos, and one unit was painted up as Hungarians ibn any case, I thought I'd do the whole brigade as Hungarian. Looks as though some will need reissuing their regulation light blue pants! 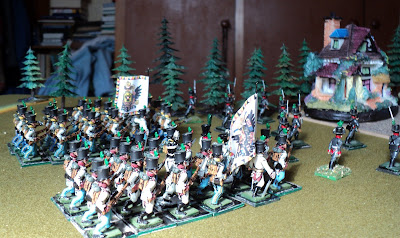 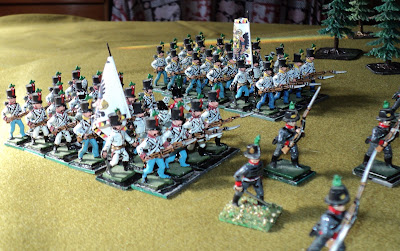 Finally: some Minifigs. Tyrolean Jager, in their characteristic light grey with green facings, leading an attack upon a defended village. 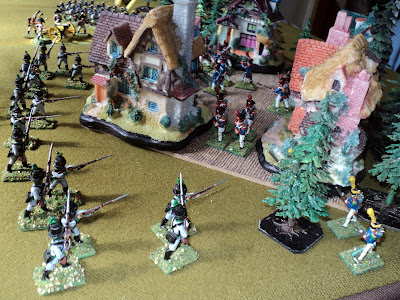 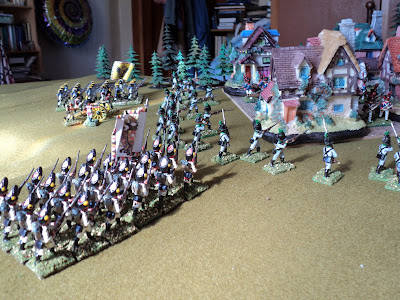 One thing this exercise has shown: this army could stand a bit of tidying up!

Posted by Archduke Piccolo at 1:20 AM