On the weekend before last, was fought part of a Kiivar counter-offensive against the Raesharn invaders. The models and figures were roughly in 1:35 scale. The forces were fairly equal, though Kiivar (Me) had a slight preponderance in infantry.

The Kiivar 'Battlegroup Thrapwordel' at its startline, ready to advance. Armour on the left, with the Assault engineers riding on them. Like Johann Sebastian Bach, who sat on a tack, they soon got off... 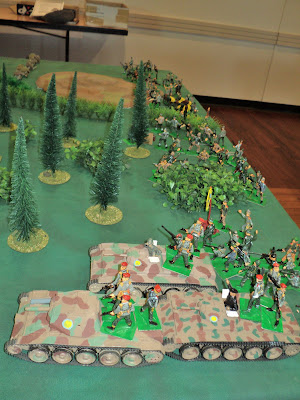 Commanded by Major Tokarifa Yamahahahahaha, the Raesharn were defending a village but had no intention of waiting for their despised opponents. Their forces seemed to comprise elements of 123 Infantry Regiment in about Battalion strength, with an Assault gun, an infantry gun and an anti-tank gun section in support (1 gun or vehicle apiece); and Nr 1 Company 201st Armoured Regiment (3 tanks). As it transpired, the Raesharn could also call upon air strikes, against which the Kiivar had no defence.

Raesharn infantry in and about Dohremi village, and lining the hedgerows to the east. 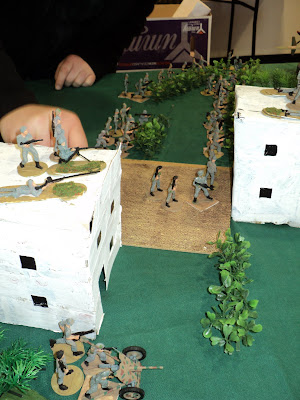 Raesharn armour on the right flank, about to drive forward to meet their foes... 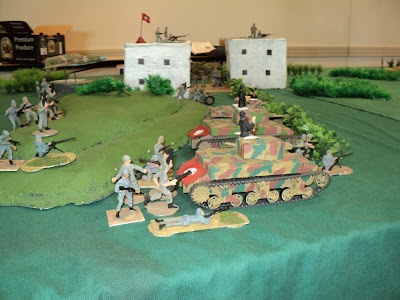 ...and score an early success. The first Raesharn airstrike, also against the armour, proved (very fortunately for the Kiivar) unsuccessful at this time. Meanwhile, the Kiivar infantry are advancing, Baker Coy through the woods; Nr2 Platoon of Able Coy up the road (suggested by 'hedgerows') towards Dohremi. Out of the picture to the right is Nr 1 Platoon also advancing 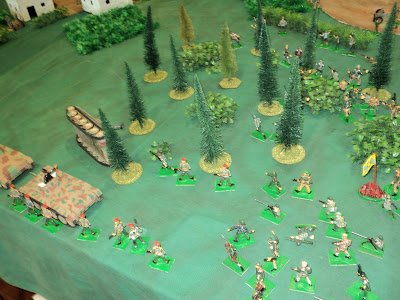 The Kiivar infantry are organised 'two-up' from 7-man sections (squads). A subaltern officer commands a platoon of 2 sections, a captain commands a company of 2platoons. A battalion comprises 2 rifle companies, plus an HQ company of specialists, which might be Medium mortars, Heavy (Medium) Machineguns, Infantry guns, Recon group, Assault Engineer group, Anti-Tank guns, Signals. A 'Section' is one vehicle or heavy weapon; a Company or Squadron, 2 to 4. The Raesharn organisation is similar. The Kiivar 47th Battalion was a bit underequipped for this operation.

Raesharn infantry, rather rashly, advance to meet their Kiivars foes of Able Company. Accompanying them, the assault gun crashes through the hedgerow, and the Infantry gun crew hastily manhadle their piece to a gap in the hedgerow lining the south road to protect the flank. In the foreground field, but out of picture, a Heavy machine gun section was hurriedly setting up... 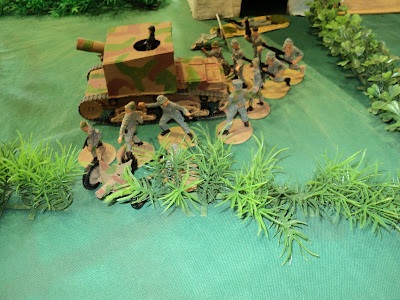 General view of the field, looking south from the Raesharn positions. A Raesharn 'pusher' ground attack aircraft approaches the battlefield... 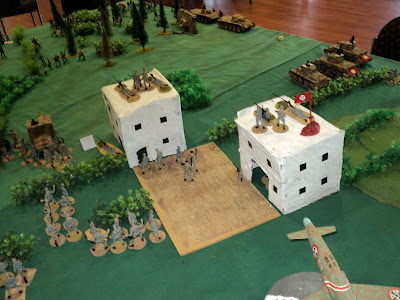 Disaster! Nr1 Platoon, 47th Kiivar Bn, create havoc in Raesharn ranks, overrunning a heavy machine gun, wiping out the crew of the infantry gun and pouring a destructive fire into the Raesharn flank. The Kiivar AT gun also scores an early success... 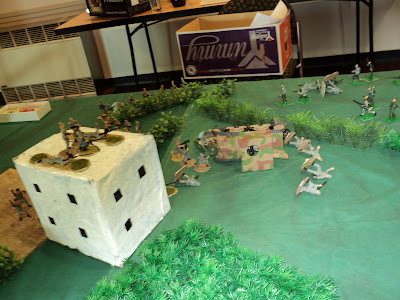 Another general view. The Raesharn counterattack on the left has come to a complete standstill... 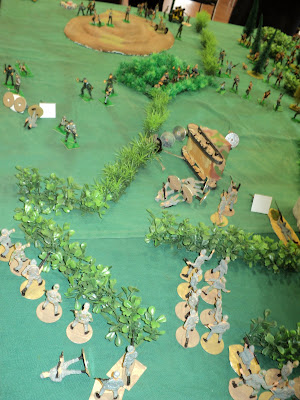 The view from behind Kiivar lines.Having knocked out the assault gun, the Anti-tank gun is being manhandled forward off the hill. Advancing up the road, Nr 2 Platoon (Able Coy) is about to come under heavy MG fire from the village...

Kiivar artillery in action - as seen from the receiving end. Do you think I could hit that front building? Not on your life! But the misses were occasionally destructive... 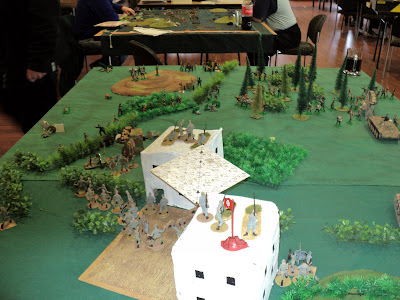 ....here wiping out the entire Raesharn Battlegroup HQ (I didn't even know they were in the village). The guns did their bit in taking ot the Raesharn lead platoon, and (fortuitously) knocking out an Anti-tank gun as well. 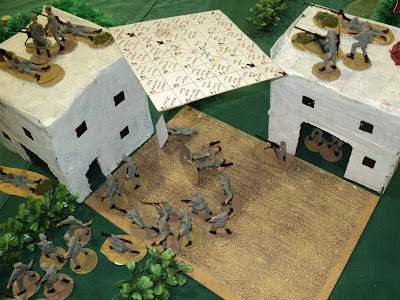 Victory at last for the Raesharn armour (helped by an AT gun to their flank until it was taken out by an artillery stonk). They wiped out the Kiivar Squadron for the loss of just one of their own tanks. Exposed as they are, the assault engineers (in red beanies) exchanged a brief fire with enemy support infantry, then make off behind the forest. 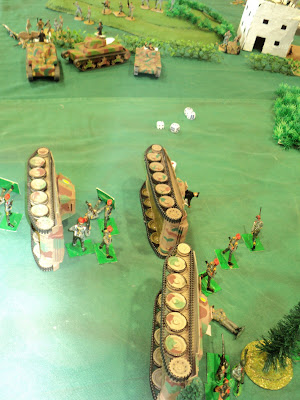 Raesharn armour, advancing to exploit their success, outrun their infantry and are about to come under a AT Rifle and gun crossfire. Meanwhile, remanants of Kiivar's Nr2 Platoon scatter into the woods. 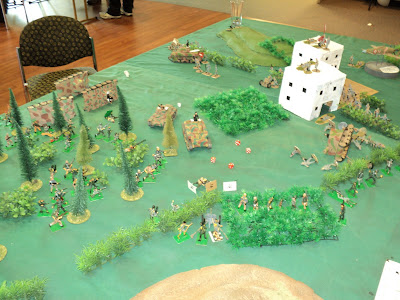 Airstrike! The earlier strike was an abject failure, but now Raesharn aircraft find a new target - the Kiivar artillery... 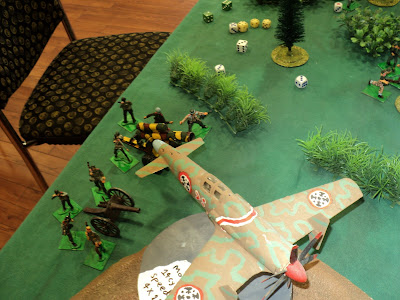 They fly off, with the Kiivar artillery reduced by half. 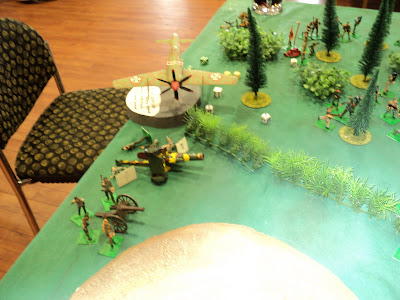 Engaged by AT Rifles (the AT gun not yet ready to fire) Raesharn armour responds in kind, knocking out two gunners, but losing a tank. The survivor enters the dense wood - a rather dangerous place without infantry support. About here, the Raesharn abandon its counterattack, and evacuate the village. 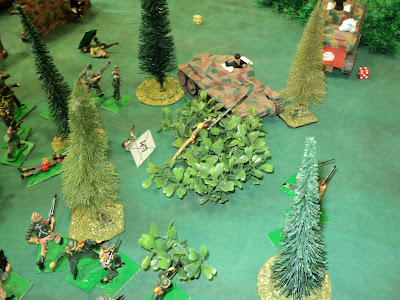 Having agreed to end the battle at this point we did a tot up of losses. Raesharn lost 2 tanks, as assault gun, AT gun and an infantry gun; Kiivar all 3 of its own tanks and its heavy artillery piece. But infantry losses much favoured the Kiivar. It was agreed that it was a Kiivar tactical success.
The battered remains of the Raesharn garrison abandoned Dohremi overnight, and pulled back a few miles into a new position. The village was occupied rather apprehensively by 47th Battalion, with little in the way of heavy equipment to support thenm in the event of a counterattack.
Posted by Archduke Piccolo at 3:05 PM