As the first day of March, 1739, dawned fine and clear, both sides of the conflict - Rebels and Imperialists, together with their respective allies, at once lurched into motion.  For the Rebels, camped about Zerbst - the only town in their possession - the situation was fraught with danger.  An Electoral Corps was established to the east at Seehausen on the Elbow River.  Their numbers were established as not much larger than the Rechburg Allied contingent, but it could not be ignored.  More worrying was the presence to the south of the Imperialists in much larger numbers.  Baron Glockenspiel stood at Bernburg with the army to had been victorious the previous year, and the redoubtable Archduke Piccolo, further off at Ulrichsburg, would no doubt be joining his colleague very shortly. 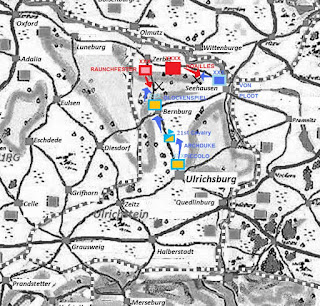 The dilemma that faced Marshal Antoine Noailles, the Rebel army commander, was not easy to resolve.  His numbers overall were fewer than the Imperialists', and the quality of his rebel troops was inferior into the bargain. The alliance of Rechburg regulars did not fully compensate for these disadvantages. But he did have one edge: the central position.  He could strike at the enemy separated.  Clearly it would be folly to leave one road unguarded whilst marching towards one enemy column; yet it were equally foolish to split his forces evenly.  He had to mass against the one and leave a holding force to face the other.
Ideally, if he could strike at Glockenspiel before the Archduke joined him, he could then turn upon Plodt's corps, drive that back, and try conclusions finally against the Imperialists combined.   But it was more than likely Glockenspiel would refuse action until Piccolo joined him.  Reluctantly, Noailles shelved that scheme.  That left an immediate strike at the Electoral corps.  For this he would take his entire Rebel Army, and leave the small Rechburg contingent to delay the Imperialists for the few days required to smash Plodt's force and retrace his steps betimes.  At the Council of War in the last days of February, Marshal Noailles had thrashed out his scheme, argued down the dissenters, and found a ready ally in Count Raunchfester.


Meanwhile, the Archduke sent to Glockenspiel to advance without waiting for him, and endeavour if he could to develop the strength and intentions of the rebels.  True, much had been learned from Catholic sympathisers in Zerbst, just as he had no doubt that the rebels knew much about his own forces from Protestant sympathisers in the south.  He had been in occasional touch with General Plodt over the last weeks, but that independent commander seemed to have his own agenda - or that of his Master the Elector. Fortunately, that inscrutable commander seemed keen to advance upon Zerbst and bring a speedy end to the rebellion.  For his own part, knowing that Glockenspiel's Horse comprised lights and mediums, Piccolo send on ahead one of his three Heavy regiments, the 21st Trautmannsdorf Cuirassiers, whilst his own corps set off after it.

On his own initiative, Glockenspiel at once marched forth.  So from the first day of March, the whole north of Ulrichstein was astir with marching armies.
The first clash occurred upon the morning of the third, as the respective cavalry contingents made contact.  Feeling he could afford the risks involved, Glockenspiel ordered his horse to drive in the enemy picquets, grand guards and squadrons right back onto the main body.  It soon became clear that he had to deal with Rechburg regulars.  The Imperialists had the numbers; the Rechburgers the weight.  In charge and countercharge the lighter Imperialist horse could make no headway, and were heavily mauled in the attempt.  Though one Rechburg squadron fled, and the Imperialists drew off in surprisingly good order, the effort had been a failure, at a cost of more than double Rechburg losses.

Sharp though the rebuff was, Glockenspiel bore it with his usual sangfroid.  To gain something, he had risked little enough.  During the evening of the following day, the Cuirassiers despatched by Piccolo joined Glockenspiel's corps, and the advance resumed the next morning.  It was not long before the Rechburg commander revealed his hand.  As the Imperialist columns approached the small sinuous stream, Schlangewasser, they could see beyond the blue coats of Gimmeitor-Oels regiment drawn up across the road.

Meanwhile, from far to the east, came the faint rumblings of a cannonade.  It seemed that Marshal Noailles had run into the Electoral corps as well...

To be continued...
Posted by Archduke Piccolo at 7:50 PM