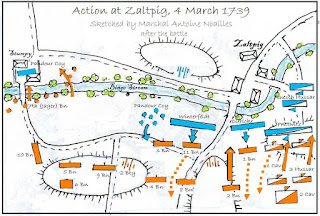 The above sketch map depicts the opening action of the particularly sanguinary battle of Zaltpig.  East is at the top of the sketch.  Having formed up in lines upon the west bank of the Binge River, the Altmark-Uberheim troops found themselves almost at once assailed by the first line of rebels.
The knowledgeable reader will no doubt have observed in this map, if not in the earlier pictures, a marked similarity to the field of Paltzig, fought in Prussia in 1759.  This is no coincidence.  In  my thinking about what sort of action to be fought, this 'scenario' came to mind...
Upon the ridge south of the town, the rebels gave as good as they got, the hussars in particular fighting their heavier and better trained opponents to a standstill.  Yet the Rebel heavies gave way to a needless panic, broke, and fled to the rear.  The second squadron was quickly on hand to take up the fight, but not so quickly that the Electoral Horse were unable to rally betimes.  Meanwhile, the hussars' fight continued on.
(Readers will also note that the cavalry action on the ridge turned into a protracted affair.  For the sake of interest, I elected to fight the action using squadrons (two per regiment) as the tactical unit.  The narrowness of the front, which could accommodate just two squadrons at a time, and the time it took to bring reserves up, meant that instances were rare in which squadrons were caught still disordered from the previous combat.  I'm inclined to think that maybe that was indeed how cavalry actions were conducted.)
The infantry fight became at once a vicious close range duel in which casualties on both side mounted at a rate to concern both commanders.


Having with the help of the gun battery to their left considerable losses to the Diericke Fusiliers, 1st (Lobrau) Battalion lost at least as heavily in the first moments.  But confused and bewildered by the smoke and noise of battle, their effectiveness fell away, blazing away aimlessly into the murk.  Not so the Fusiliers, whose musketry continued with horrible effect, reaping a deadly harvest among the brown-coats, and taking a toll upon the rebel gunners as well.
In the centre, 11th battalion had fallen back with heavy loss in the face of Winterfeldt's disciplined platoon fire.  Quickly advancing to fill the gap, 8th Battalion received a rough welcome to battle, losing perhaps 60 men  (i.e. 3 figures) before firing a shot.  Fortunately their high morale kept them in the line.


The lead battalion of 2nd Brigade, the 3rd, were finding the Pandours difficult targets to hit, and were also barely maintaining themselves in the fight.  Fortunately, it was the effective canister fire from the 2nd gun battery to their left rear that evened up the fight.
The Electoral guns, on the other hand, might have been better employed on the west side of the river.  Where they stood, they gave little enough assistance to the infantry on the far bank.   But General Plodt had had to apprehend the possibility of a rebel envelopment from the north, where he had only the Pandour company in the Stumpy village to oppose a crossing.

The guns remained where they were to cover Zaltpig town and its river crossings from the north.

There the Pandours were actually doing quite well for the time being, firing from the cover of the buildings, wall and fences, and making life difficult for the Jager Battalion, despite the latter's two to one odds.

In the centre, the electoral infantry continued to edge forward as the rebel line crumbled before them.  For the next hour it seemed to Marshal Noailles that the ratio of losses were showing a worrying trend in his opponents' favour (In fact, the second (23-8) and third (20-6) bounds of shooting cost the Rebel Army three times the losses the Electoral Army was taking, and they were heavy losses, too: more than two battalions' worth). 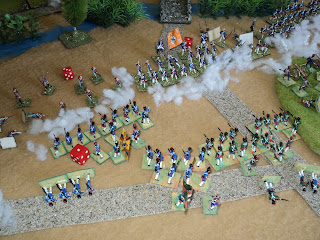 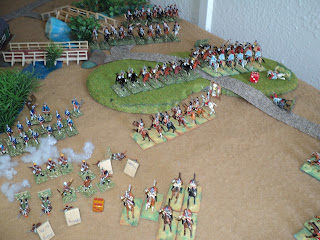 His troops were feeling it, too.  The leading Hussar squadron broke and fled the field,  and the pitiful remnants of the once-proud 1st Battalion made off as best they could under fire.  The rebel gun battery that had done much to support 1st Brigade, suddenly found the enemy had pushed right up the muzzles of their cannon.  Gunners began to fall at an alarming rate.  Just barely in time, the remaining gunners hitched up the guns and made off.

Yet for all that, the rebels continued to maintain a front on the south flank.  The Cavalry commander, General Maxim Trumpeter, flung in the reserve squadrons.  Not yet were the Prittwitz  Cuirassiers able to advance off the hill.  Second Battalion also took up the fight 1st Battalion had begun so well but failed to maintain.  Though taking heavy losses almost at once, they were to frustrate the Diericke Fusiliers for another half-hour. 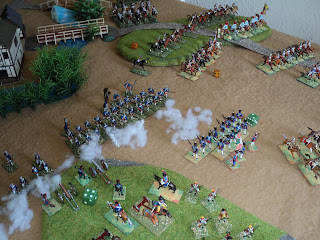 To be continued...
Posted by Archduke Piccolo at 5:07 PM