Acknowledgement:
Welcome to the 80th follower of theis blog, Mike Gindling.  My thanks, and welcome aboard!


Also to recent commentators.  You have been most generous in your remarks and observations.  To Gowan, thanks for pointing out a chronological glitch - an anachronism, in fact.

Despite some very helpful suggestions of several commentators - all good ideas - I shall acknowledge the error.  Wireless was not invented in 1877, though wire-tapping definitely had been.  I'll attribute the confusion to the rather beguiling but bewildered historiographer, J. Eccleston ffforbes-Mugglesworthy, whose rattling fast-paced yarns are besprinkled - seasoned withal - with inaccuracy and error.  Not to mention downright lies.  That's my story, anyhow. 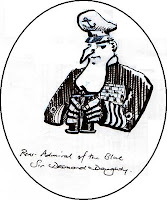 The Narrative Resumes:
Suffice it to say, that long before the present outbreak of hostilities, the Ruberian Admiralty had set up a special Office - the Telecommunications Intelligence Gathering, Evaluation and Response Service (TIGERS) - with listening posts scattered  not only within Azuria, but throughout the whole of Europeia at large.  That the Azurian Troisieme Bureau (among others) might have achieved a similar establishment within their own telephone and telegraph networks seemed not to have occurred to Loncester bureaucrats.

Now, it was the usual practice of the diligent Admiral Gantheaume to notify by telephone or telegraph, not only his ship captains, but also the Ministry of Marine where he would be found during the following night, whether aboard ship, or ashore.  Not wishing to draw attention to his  assumption of personal command of the raid he had reluctantly undertaken, he omitted this usual practice.  But his omission also to send any substitute message was not lost upon the listening TIGERS.  At once the Lords of the admiralty in Loncester were notified, the alerts sent to Rosyth and Scarper Flora, and the fleet put upon instant readiness.


Something was afoot, that much was certain.  Nothing, of course was heard from the Azurian Admiral for several hours, until the early hours of Wednesday morning the Admiralty telegraph receivers began a frantic chattering.  Highestoft was under fire from the sea.  An Azurian naval force, for sure.  The shore battery had responded vigorously but was soon silenced.  My Lords of the Admiralty could only wait, and hope that Doughty would arrive betimes at the scene.

Meanwhile, before its last gun was knocked out, the shore battery had put at least one effective shot aboard the Azurian squadron.  Gantheaume's temporary flagship, Ixolite had received a hit amidships that had started a fire.  The Admiral was inclined to think that if nothing worse happened, this raid might be termed a success.  It was a hope not to be realised. 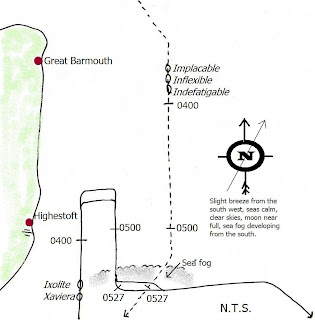 The moment steam had been raised, Rear-Admiral Sir Desmond Doughty, in Indefatigable, put to sea in the early afternoon of 13 March 1877, together with Inflexible and Implacable, and set a course to the south east. The weather was, as usual at that time of the year squally with intermittent heavy rain and winds from the north east. As evening drew in, however, the breeze dropped as it veered right round to the south west, the sun burst through spectacularly on the western horizon, the skies cleared, and a moon well past its first quarter lit up the sea. Tarborough was passed without incident, as was Great Barmouth, here Doughty altered his course to the south.

Still no sight nor sound of the enemy.  Were the TIGER boffins mistaken?

Shortly after 0400 hours, the lookouts reported flashes to the south by west. Highestoft! Of course!

At once the crews were ordered to battle stations, as Doughty continued on a course due south.  He planned to be seaward of the enemy with full broadsides available before he opened fire. Just as the last Azurian broadsides were being fired into the town, Azurian lookouts were startled by rippling flashes seen on the horizon just north of east.  That they hadn't seen any other sign of the Ruberians approaching on such a clear moonlit night, had to be due to the sea haze that is always a feature of the Northern Sea.

The Ruberians' first  salvo was particularly effective.  I shell from HMS Implacable slammed into Ixolite's rear turret and knocked it out.  Gantheaume at once ordered a 90 degree course change to starboard, followed quickly after by another, to bring his course parallel to the Ruberians.  In so doing he was taking a fearful risk, but he dared not try any other measure that would place the more powerful Ruberian squadron between himself and home.  His fears had been realised: this had been one raid too many.
As the range shortened Ixolite and Xaviera both took hits, and the latter was now left with no guns in action.  As the Azurians turned onto its southern course, Xaviera at last landed a hit upon Indefatigable.   All the same, it would have been a poor lookout for Gantheaume and his ships but for the piece of good fortune that saved him.
A thick sea fog had been developing in the south and was rapidly approaching the embattled squadrons.  The final salvoes from both sides were ineffective, before they both disappeared into the murk.  There the action ended.  Doughty altered course a few points to starboard to try and edge down upon the enemy's last known course; but Gantheaume had within a minute or two of entering the fog ordered a 90 degree turn to port.  Undetected in the white-out conditions, the Azurians passed behind the Ruberian squadron, and by the time the fog had dispersed with the breaking dawn, they were well over the eastern horizon.  Not wholly satisfied, Rear-Admiral Sir Desmond Doughty turned for home.


The reaction of public opinion in Ruberia and Azuria were a study in contrasts.  Admiral Gantheame arrived home to a hero's welcome (much to his surprise), having destroyed an enemy shore battery, taken on a much more powerful enemy squadron and brought home his ships intact.  That his flagship Ixolite had been in a near sinking condition when she entered the port at Ville-Eglise served merely to add to his glory.

Ruberian response to the action proved quite the reverse.  Rear-Admiral Doughty came in for much criticism, and only his immensely high standing in public esteem saved him from a court martial.  As it was, a public inquiry led to the fall of Sir Winston Kirkridge as First Lord of the admiralty and of Admiral of the Fleet Sir Jno. Angler as Naval Commander in Chief.  That role was to be taken by Sir Jno. Jellibene, newly promoted to Admiral of the Red Squadron.

When the test would come, the new C-in-C would find the weight of public expectation heavy upon his shoulders.

This brief encounter was of course a little play test of my new '4 hits to sink' amendment of my one brain cell rule set earlier published.  All naval actions have some kind of time limit, of course, and I have decided upon reaching the edge of the board as a rather arbitrary form of conclusion.  As this action was fought on an area less than 2' square it was never going to be a long drawn-out affair!  Even so, The Azurians were very lucky to get off with both vessels...
Posted by Archduke Piccolo at 7:59 PM