The Battle of Jasper Roads: Part 1.

Before beginning this narrative, permit me to acknowledge two new ... members? followers? ... of this blogspot: Chris Johnson and Foss1066.  Some time ago, Springinsfield and Williamthenotsoyounganymore (Dig the cartoons, man!) joined also.  I appreciate your attention and your company.

Prologue.
In the many and interminable wars between the rival states of Azuria and Ruberia, one or the other has had occasion to call upon allies to aid them in adversity.  The Azurophile Czar of the eastern Empire of Porphyria was generally ready to answer the call of the Republic; whilst the Azurophobic Kaiser of Grauheim was as apt to join forces with his cousin, the king of Ruberia.


The war of 1877 was one such.  In the few relatively peaceful years preceding, all the navies had been building  up their naval resources and technologies, but were prudentially keen before spending too much of their nations' revenues, to test their 'hearts of iron' in battle.  Curiously enough, all four of the great powers had settled upon developments along the lines of the Monitor gunboats, but engineered to the scale of lines-of-battle ships rather than inshore vessels.  Their designs proved to be remarkably similar.  That one might have expected this did not stop agitators in certain quarters fling about accusations of espionage, treason and plot.

When the 1876 winter talks between the plenipotentiaries of Ruberia and Azuria inevitably broke down, both sides hastily sped up their naval programmes.  No one knew for sure the cause of the cessation of dialogue.  The Ambassador of Azuria was said to have tugged the beard of the Ruberian Envoy, whereat the latter had tweaked the ends of Ambassador's generous moustaches.  What led to that witty exchange no one was willing recall exactly.  For their part, neither Kaiser nor Czar were willing to try cases, but almost fell over themselves offering their respective navies in support of their preferred ally.
It transpired, however, that neither's navy was in quite a fit state to enter hostilities, for all the usual reasons that attend an overhasty commitment to war.  So the Azurian fleet stood to at their anchorages, whilst the Ruberian waited at theirs.  Galled into action but the apparently interminable wait, the Azurian Government authorised Admiral Gantheaume to take a small squadron and bombard eastern Ruberian cities.  The hope was that such an affront would goad the Ruberian navy to respond, and thus bring on a general sea battle.

Quite why the good Admiral was chosen to lead this task was as much a mystery to him as it was to everyone else.  Of his great-grandfather, also an Admiral, some wag epitaphographer had penned this rhyme:
'Here lies the body of Admiral Gantheaume
Who sailed his fleet from Brest to Bartheaume;
Then, aided by a wind from the west,
Sailed his fleet from Bartheaume to Brest.'  (not original)
It seems the great-grandson bore the stamp of his forebear: an honest toiler, but no fire-eater. 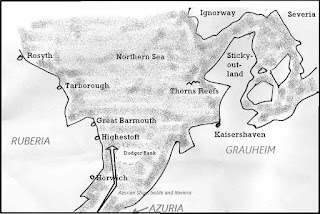 Nevertheless, the bombardments of Great Barmouth
and Tarborough went ahead, silencing the shore batteries (a worthwhile military outcome), but raising a loud outcry from the cities' burghers.  To assuage the legitimate fears of eastern city and sea port dwellers, the Royal Navy detailed half its Northern Sea Fleet to Rosyth, much closer to the endangered cities than it usual anchorage at Scarper Flora.  Other than that, the only further precaution from the Navy was to increase the numbers and vigilance of its wireless intercept corps along the border with Azuria.

For a month, six weeks, eight, Admiral Gantheaume waited.  So did the Republican Government, but with much less patience.  Rounding upon the harried Admiral by telephone, the Minister of Marine, himself having just emerged from a lively interview with M. President, ordered him, on pain of instant dismissal and court martial, once more to undertake a 'special mission' to one of the Ruberian sea ports.

The Admiral chose Highestoft: the nearest target, whose small shore battery made the thing just barely worthwhile.  An objective further north he dared not risk; nearer his home ports there were none to be had.  Knowing the risk that would be run, he chose his Third Division vessels Ixolite and Xaviera for the task.  Shifting his flag to Ixolite, he would lead the expedition himself.   At about 1600 hrs, Tuesday 13 March 1877, the two Azurian warships quietly slipped out of the harbour of Ville-Eglise and turned north.  Little did they or their Admiral know that an overlooked, but apparently minor, detail  had alerted the Admiralty at Loncester that something was afoot.  Even before Gantheaume's little squadron had raised steam, Rear-Admiral of the Blue, Sir Desmond Doughty was at sea, with three battleships eager to try conclusions with the upstart Republican Navy...

Aside...
As you will have noticed in the pictures, I have placed all the vessels on stands made of a thin type of polystyrene (or similar) packing material.  Rather than sit them on top, I carved out depressions for the ships to 'sink' into, which gives the effect (I think) of floating.  The stands still look like stands, of course, that can't be helped.  Otherwise, I won't trouble to paint the ships, but may give them identifying markers, possibly flags for flag officers' vessels.

Posted by Archduke Piccolo at 10:40 PM