The refurbishing of just a portion some of the multitudinous inventory of recently acquired stuff is proving a challenging task: quite a lot to do, and then find accommodations for them.  Here's a few... 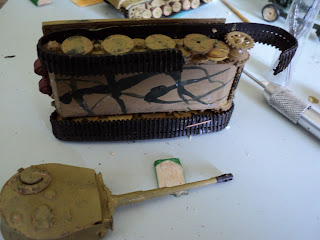 This particular Tiger has proved a beggar to fix: as fast as I glue bits back on, other bits fall off. Unfortunately its track broke as well.  It has come this close to being 'laid up in ordinary' for its parts.  I had to drill a hole through the centre of the sprocket and the axle point in the hull, and trim down a toothpick, shove it through and glue into place.  I just could not by any other means get the thing to stay on.  The front three road wheels are equally problematic. 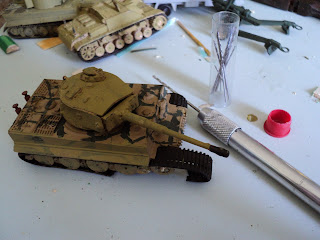 In the end I've had to glue them all into one 'unit' and then try and secure them into place.  The broken track will then have to be dealt with.  The plan is to stretch the whole over the sprocket and road wheels sufficient to bring the ends to touching - or as close to it as may be.

It is not helped by my noticing the buckled turret roof I had not previously observed.  Might not be so easy to mask that!
The Tiger below has been a trifle better behaved.  The tracks tend to wibble all over the place and I might be forced to glue them to the road wheels to get them to look right.  Eventually I'll get hold of some turret bins and exhaust covers for these machines. 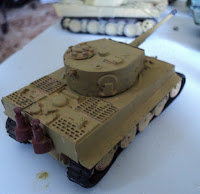 Below are the 3 ROCO Tigers receiving the first (rough) coat of 'factory yellow'. 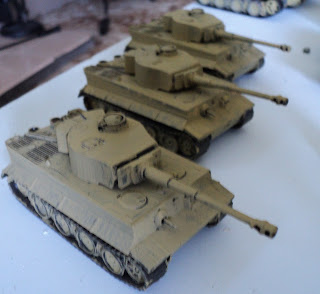 Below is the StuG being reincarnated as a StuH 105.  Some filling work will be needed around the muzzle brake.  The paint work looks rough as guts, I accept, but I reckon the thing is too delicate to chance stripping.  Once painted, weathered and inked I'm hoping it will pass muster.  It is likely this chappy will be fitted with side schuertzen as well. 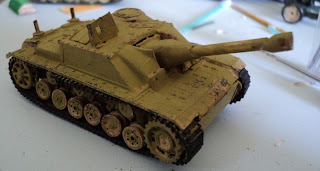 My new Panther company - or probably reinforcements to existing companies, building them up to 4 AFVs apiece.  I think I have 17 Panthers now - a full-sized 1944 company in 1:1 terms; a strong battalion in Command Decision terms.  These will need glacis plate MGs refitted, but these are otherwise in pretty good nick. 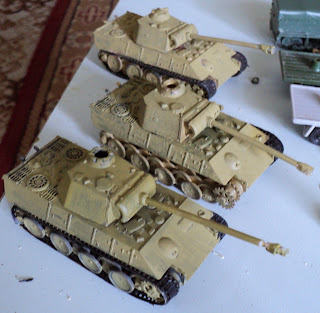 A welcome addition to my British Army transport: a Bedford prime mover for the 5.5-inch medium artillery. Note: it has since been pointed out this is in fact a Matador, an AEC manufacture.  Nothing to do with Bedford.  My mistake: I knew - or ought to have known - better.
The flat bed, tilt and cab were glued back on - which proved less simple a matter than it sounds, actually. There's still something skew-whiff about the thing, but nothing too serious. 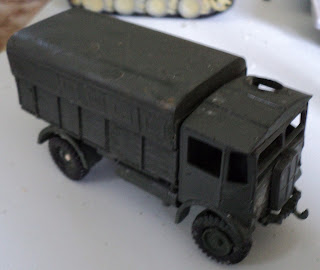 Lacking the rear axle assembly - which would have been pretty delicate anyhow, I simply glued on a block of balsa, and then bored a hole through it for my toothpick axle.   It's no work of art, but it will do methinks. A liberal coating of PVA and a black wash or paint will disguise it sufficiently, I reckon.  The underside of trucks is not something we want to inspect too closely too often anyhow.  We aren't interested in their gender, are we...? 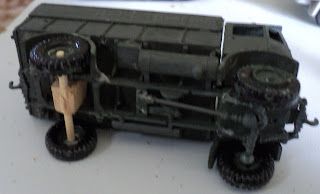 Below: two 8.8 cm FlaK.  The near one I have had for some years, the farther is one of them there recent arrivals.  The near one has been missing one of its folding legs since I acquired it, back when Methuselah was a lad running bare-arsed around the hills of Mesopotamia or wherever.  The new guy seemed also to be missing a leg, but it transpired it was there, and the turntable assembly was wanting a small broken off piece to hold it in place.  In the end I simply glued the floppy leg in the 'down' position.  The old 88 will get a wooden leg... There is also the temptation to remove the gun shields and call them Russian 85mm AA guns. I could use a couple of those... 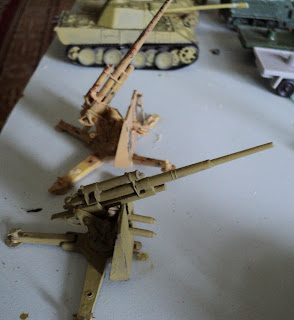 Although these little guns are supposed to be PaK38 50mm Anti-tank guns, they really are far too small for this.  Some research seems to indicate they could be 42mm PaK41 tapered bore weapons.  Most of the images I've found don't look too much like these, but there are one or two I've seen that do resemble this model.  Not many were ever issued (fewer than 400), and they seem originally to have been designed for the Parachute troops.   So that is what they will be defined as. 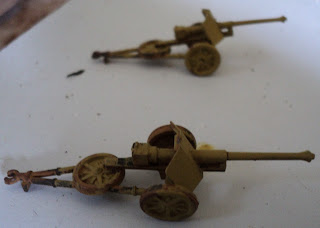 As I have some of the old Airfix sPzB41 28mm Anti-tank gun/rifles, they will be roused out, given some wheels and pressed into service as well.

Finally, a PzIV addition to my 2nd Panzer Battalion.  This is a PzIVF2 by the look.  I've had to replace the odd road wheel (e.g. the green one), and one of the return rollers is missing.  That has been replaced by a piece of tubing that, with some filling and judicial application of paint, weathering and ink, will be sufficiently disguised.  I hope. This fellow comes across in the photo as a hardened veteran of many battles... 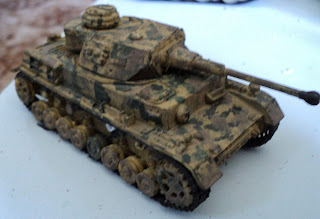 It has all been pretty rough and ready, but gradually we are progressing...
Posted by Archduke Piccolo at 6:20 PM