Here are some pictures of my attempted play test of some basic mechanics of the Pike and Shotte rule set. 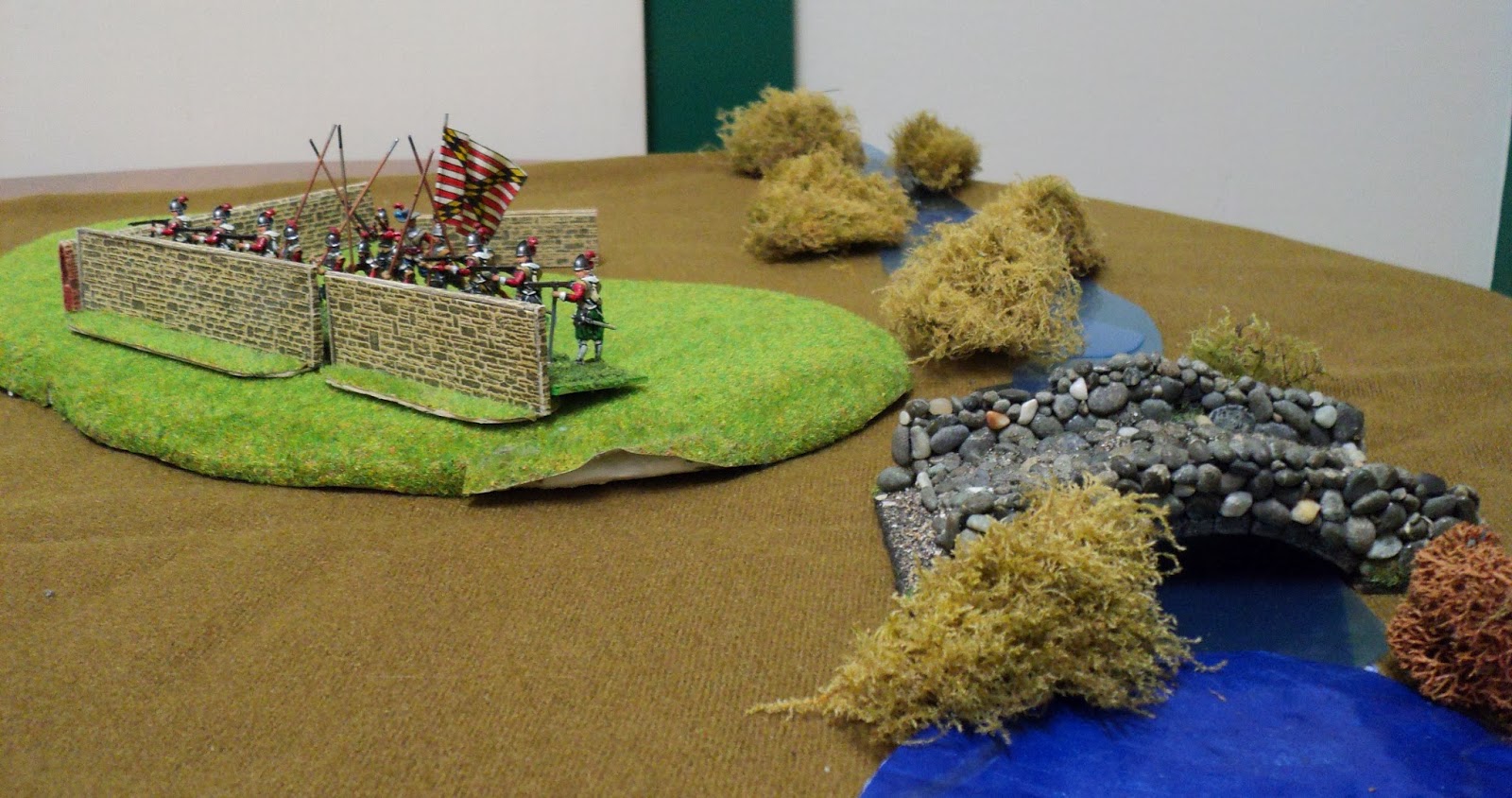 The set up is that an Imperialist battalia is guarding a river crossing, setting themselves up in a partially walled field flanking the road leading to the only local crossing, the bridge. 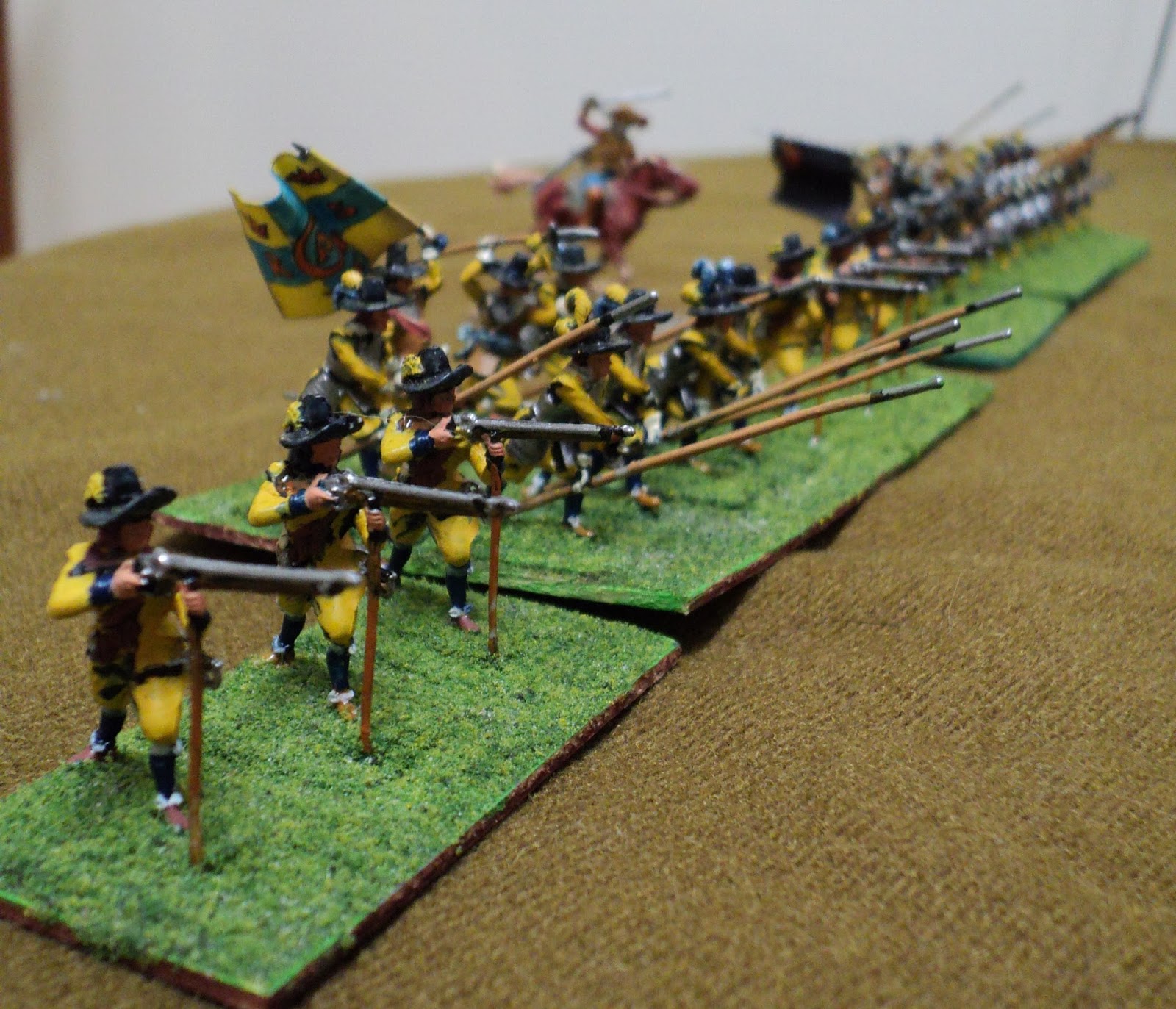 King Gustaf Adolf of Sweden has ordered General Beornsson to take his brigade of two Battalia, the Yellow and the Black Regiments, to take, seize or carry the river crossing. 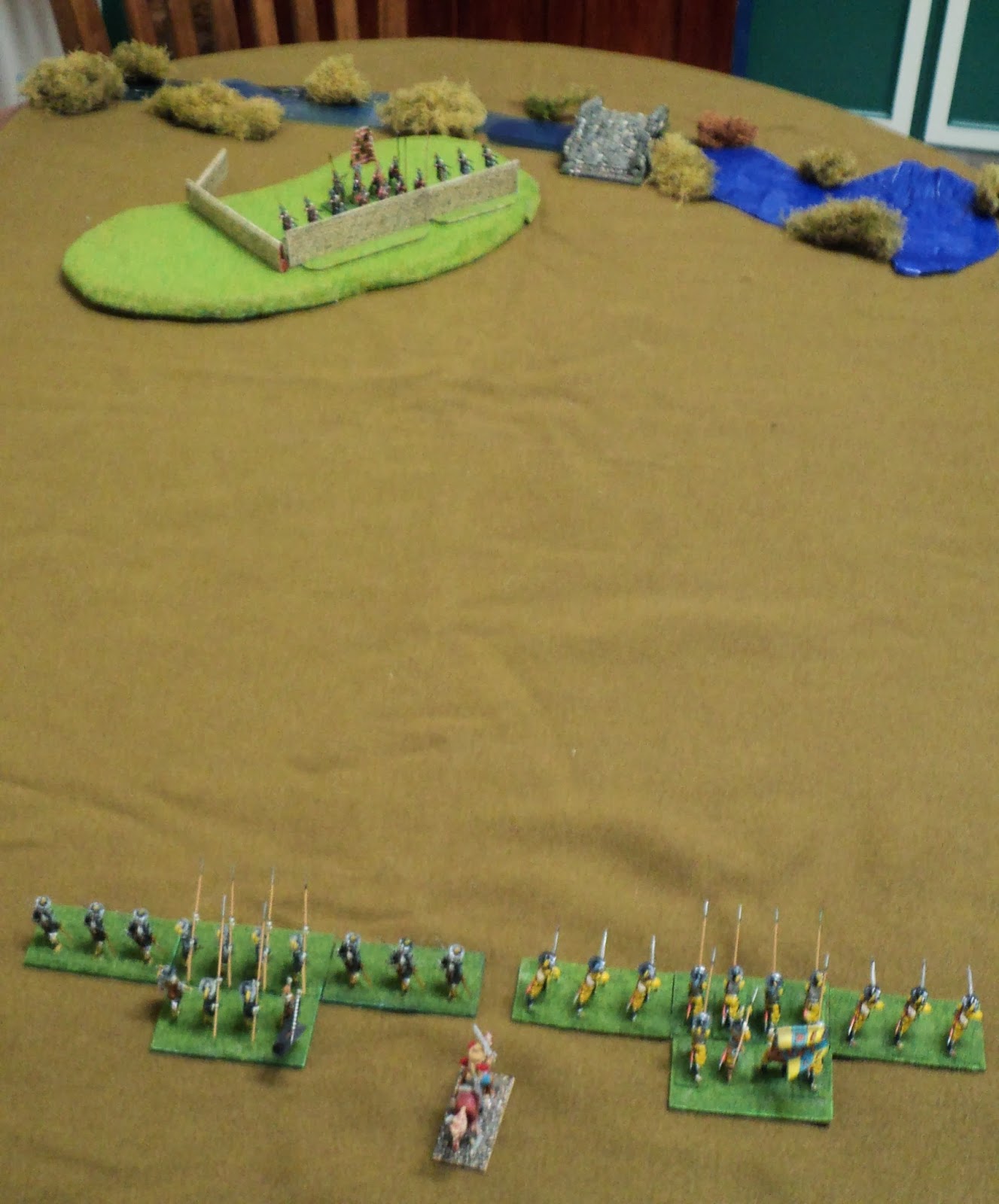 The following pictures give a bit of an idea how the attack went. 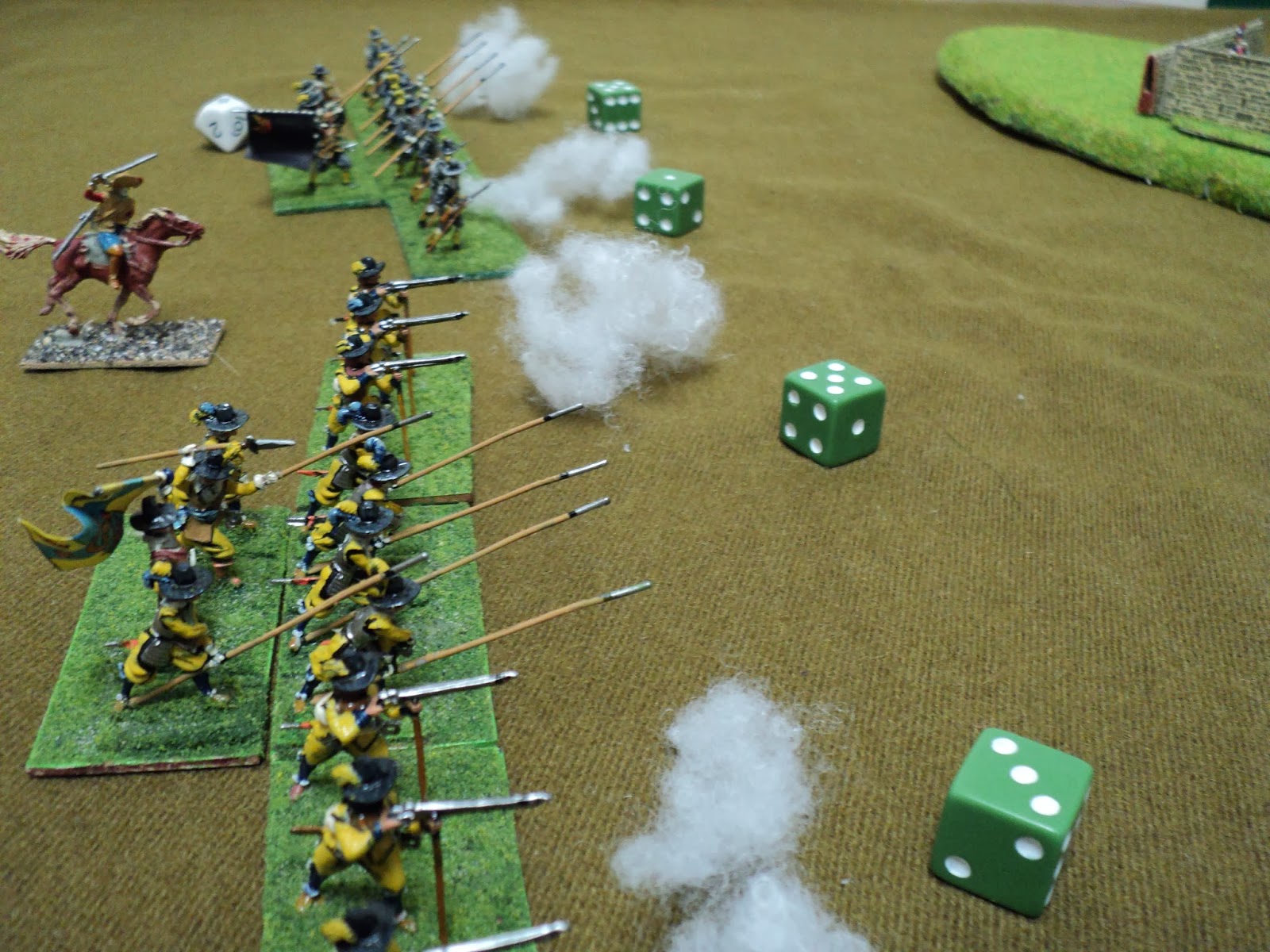 I won't attempt to explain the dice rolling except to say that the game mechanics strike me as extraordinarily complicated, and I'm not sure I go a bundle on the damage auditing, neither. 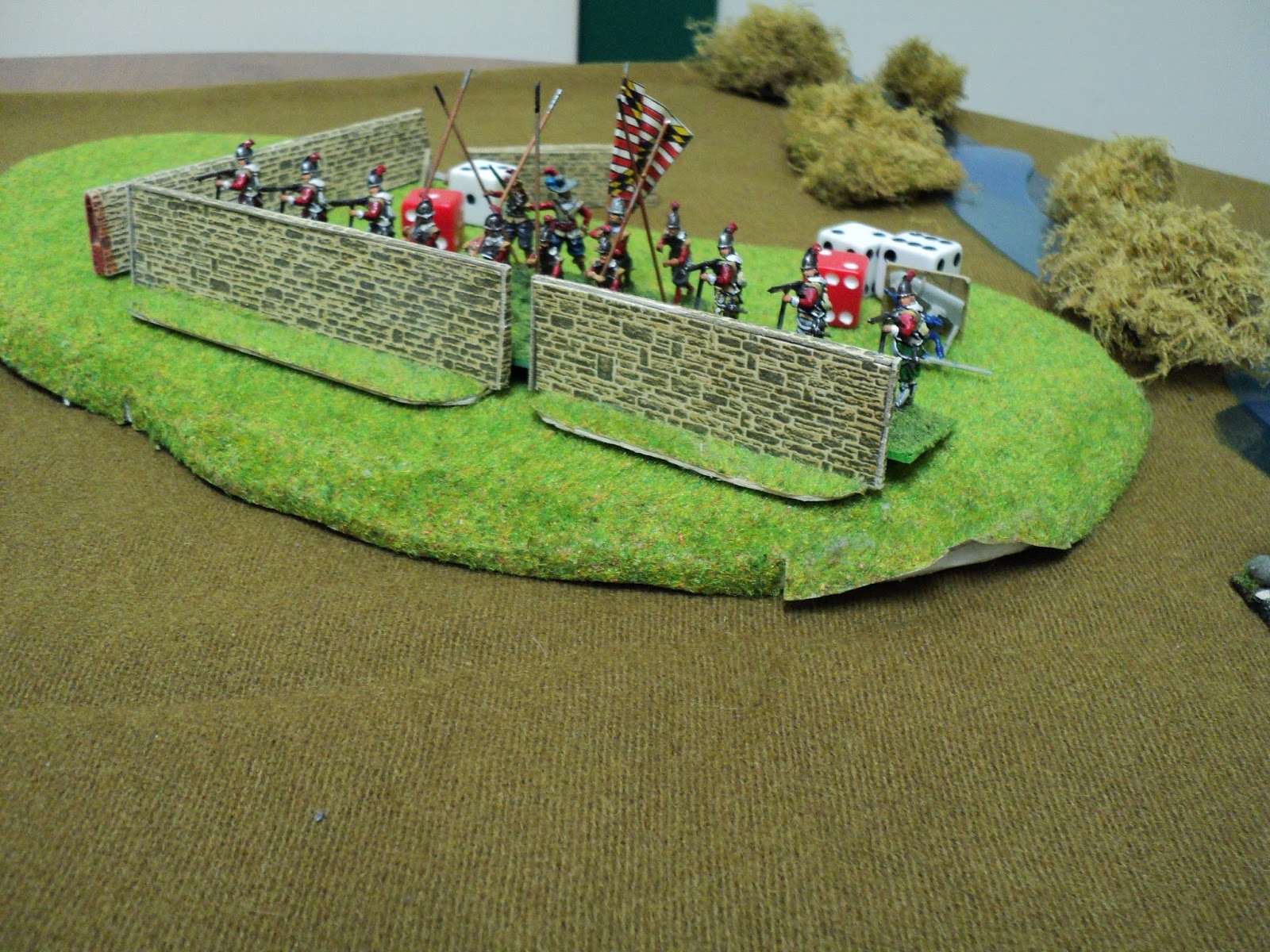 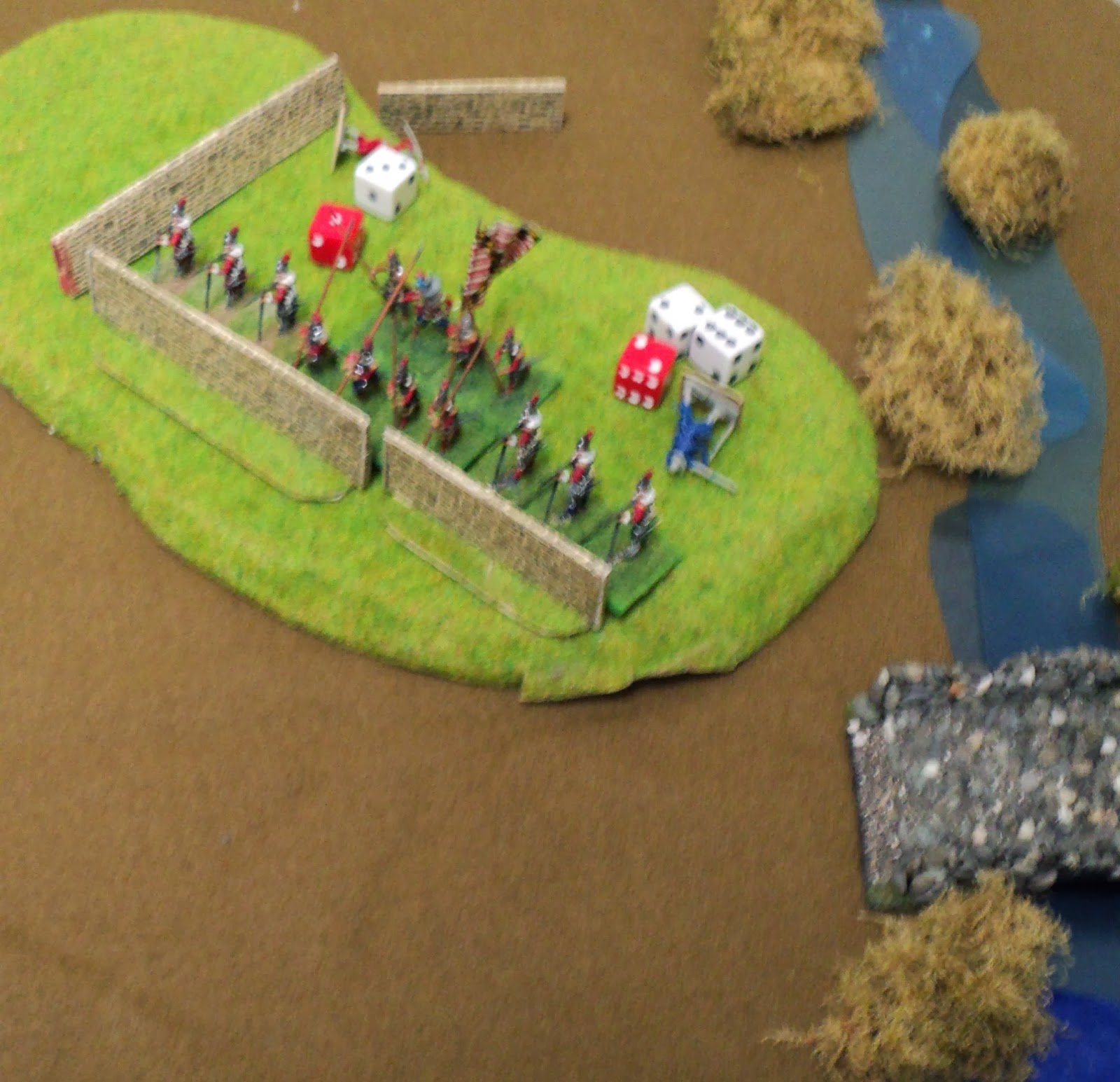 The Black Regiment outstripped their tardy fellows in the Yellow, reaching the wall first.  At this point, Swedish losses somewhat exceeded those of the Imperialists, but not enough to hold them back. 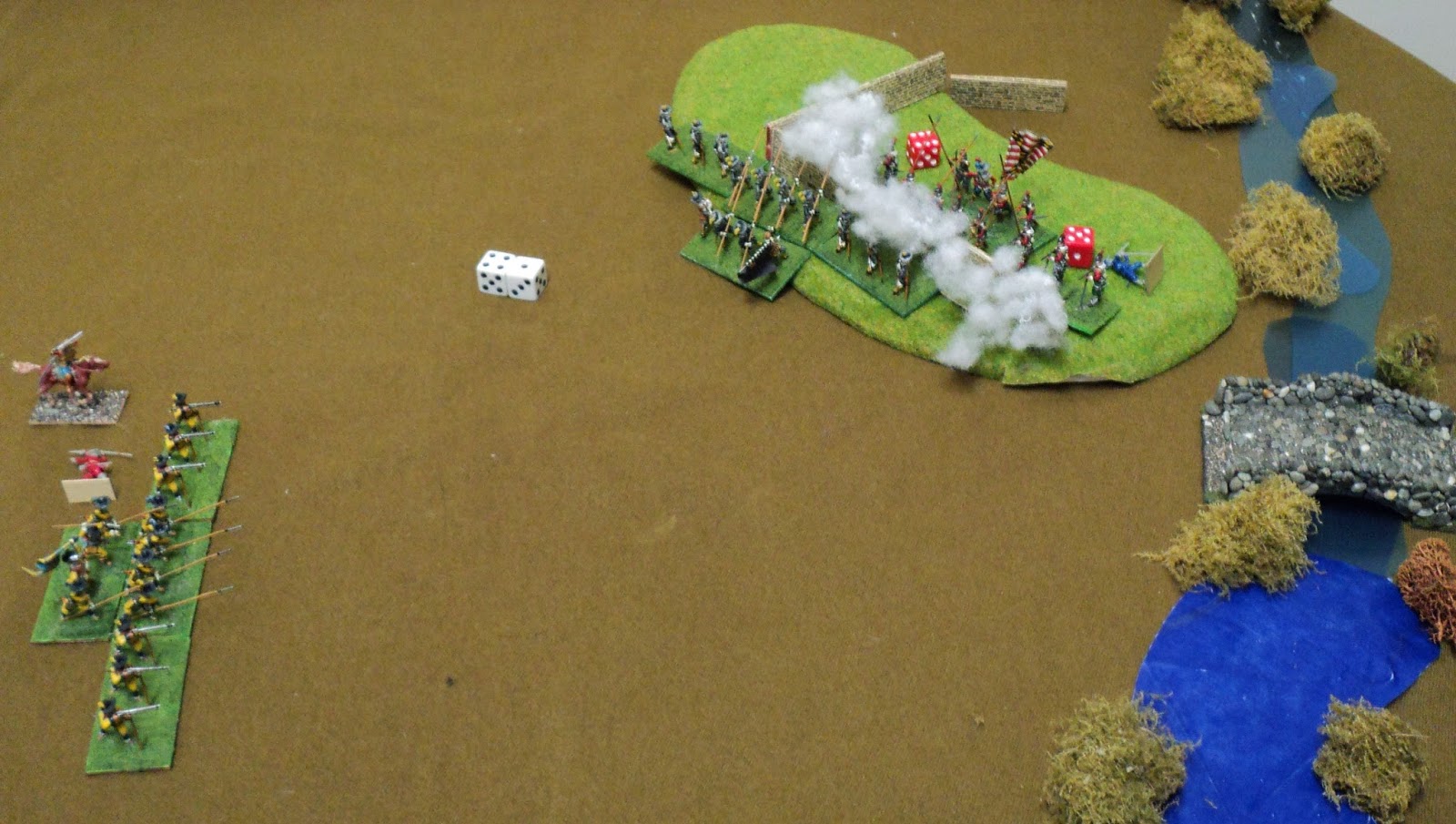 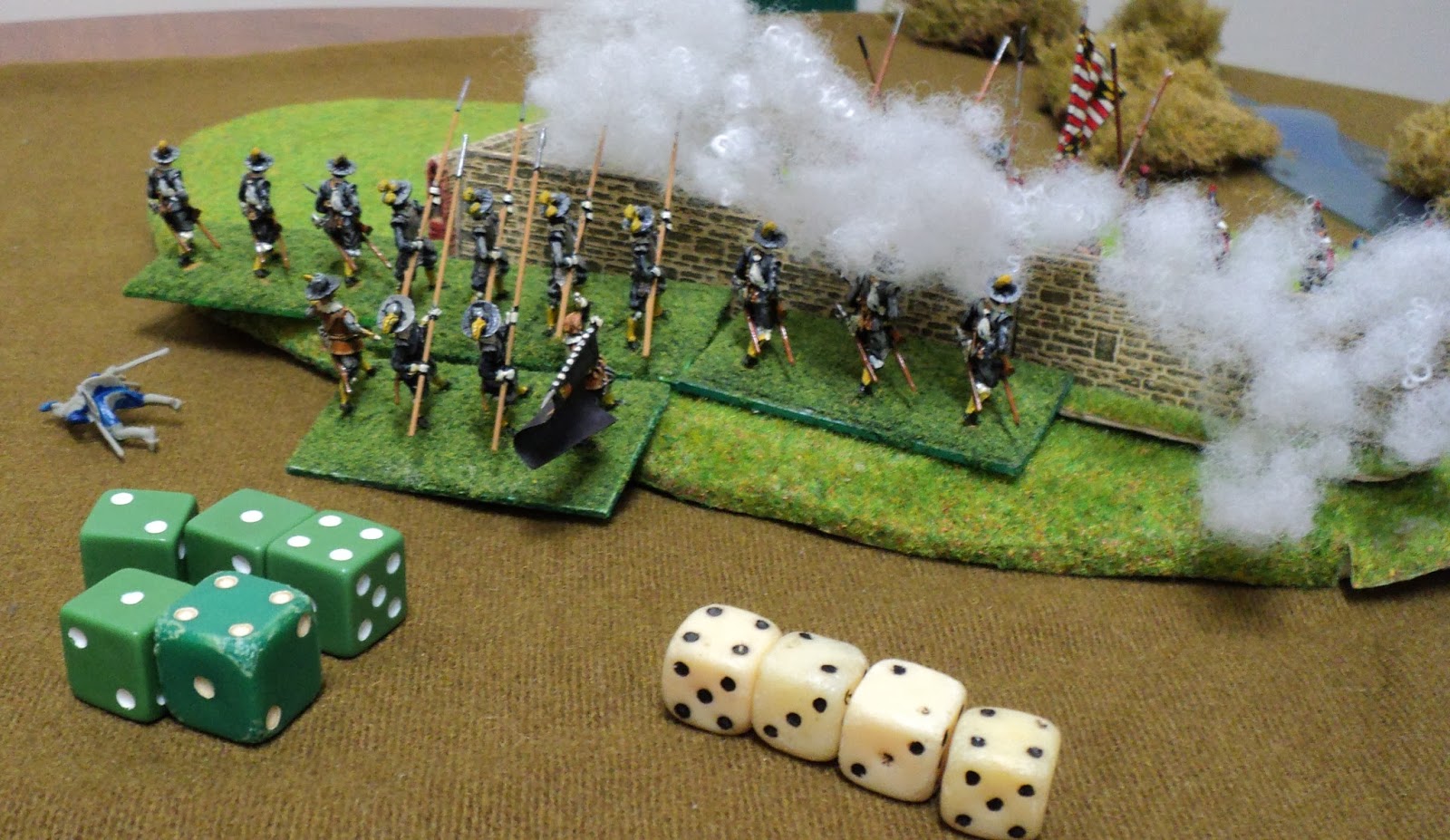 All unaided the Black regiment struggles up the hill and tries to force the position.
The Yellow Regiment (having halted for two whole moves!) at last makes a move to help their embattled comrades. 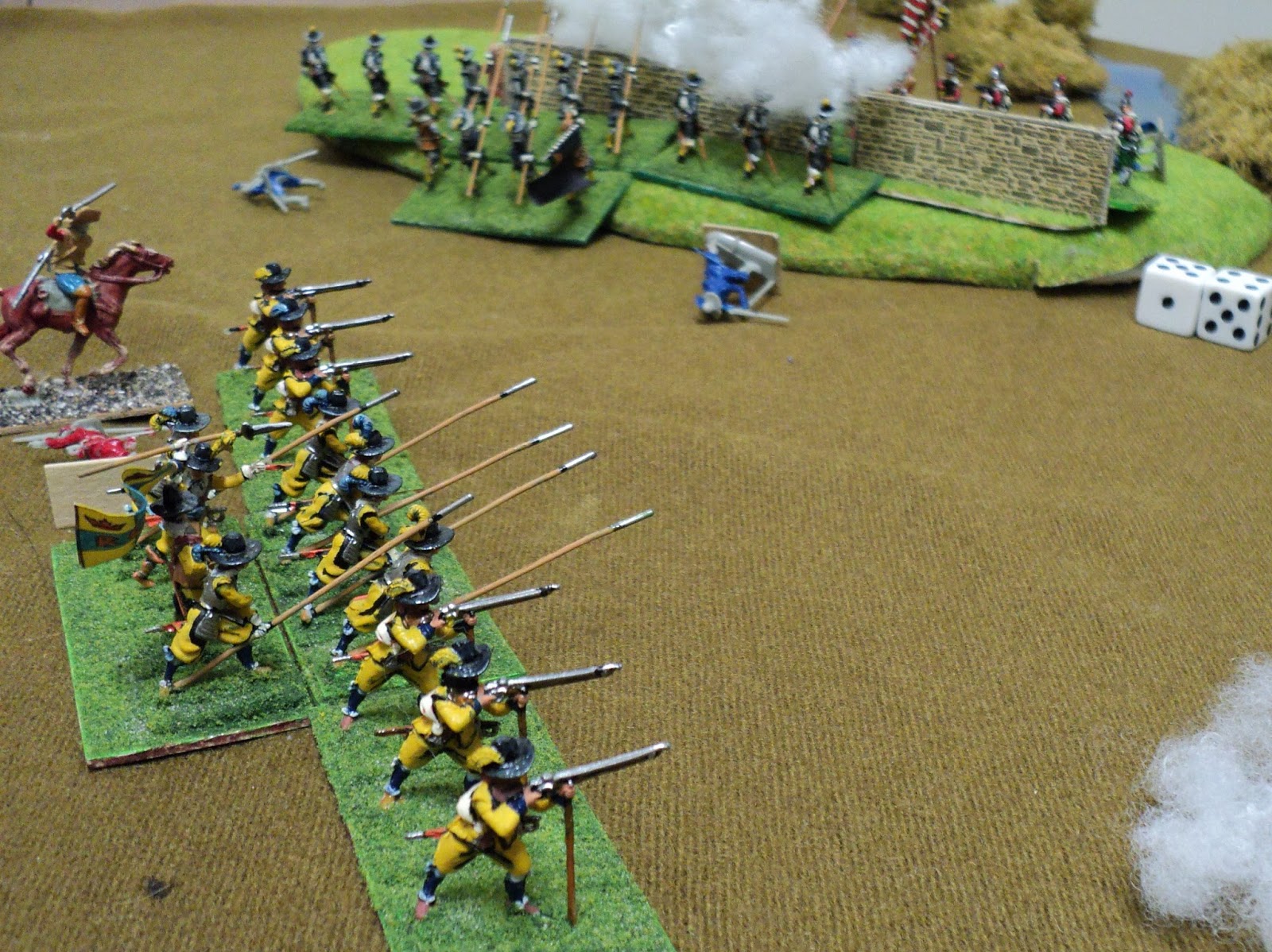 Meanwhile, the unengaged Swedish left flank swings round to engage the flank of the Imperialist line.  Owing to the proximity of the Yellow regiment, the Imperialist are reluctant to reciprocate with their unengaged flank. 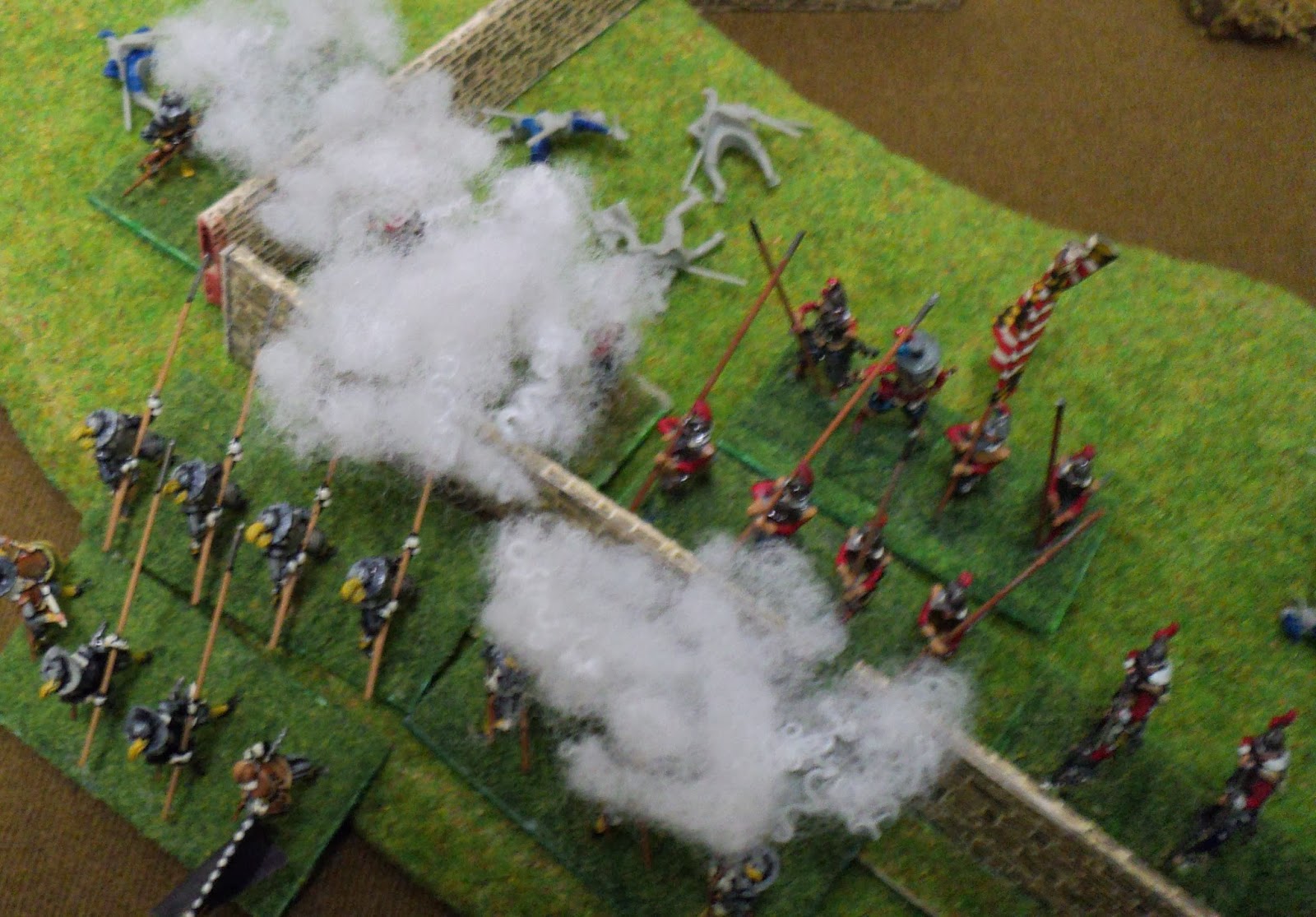 So far the fight has only marginally favoured the Imperialists, but heavy losses in successive turns on their right flank renders the position untenable.  The Imperialists abandon the walled position and retire - in some disorder - across the bridge. 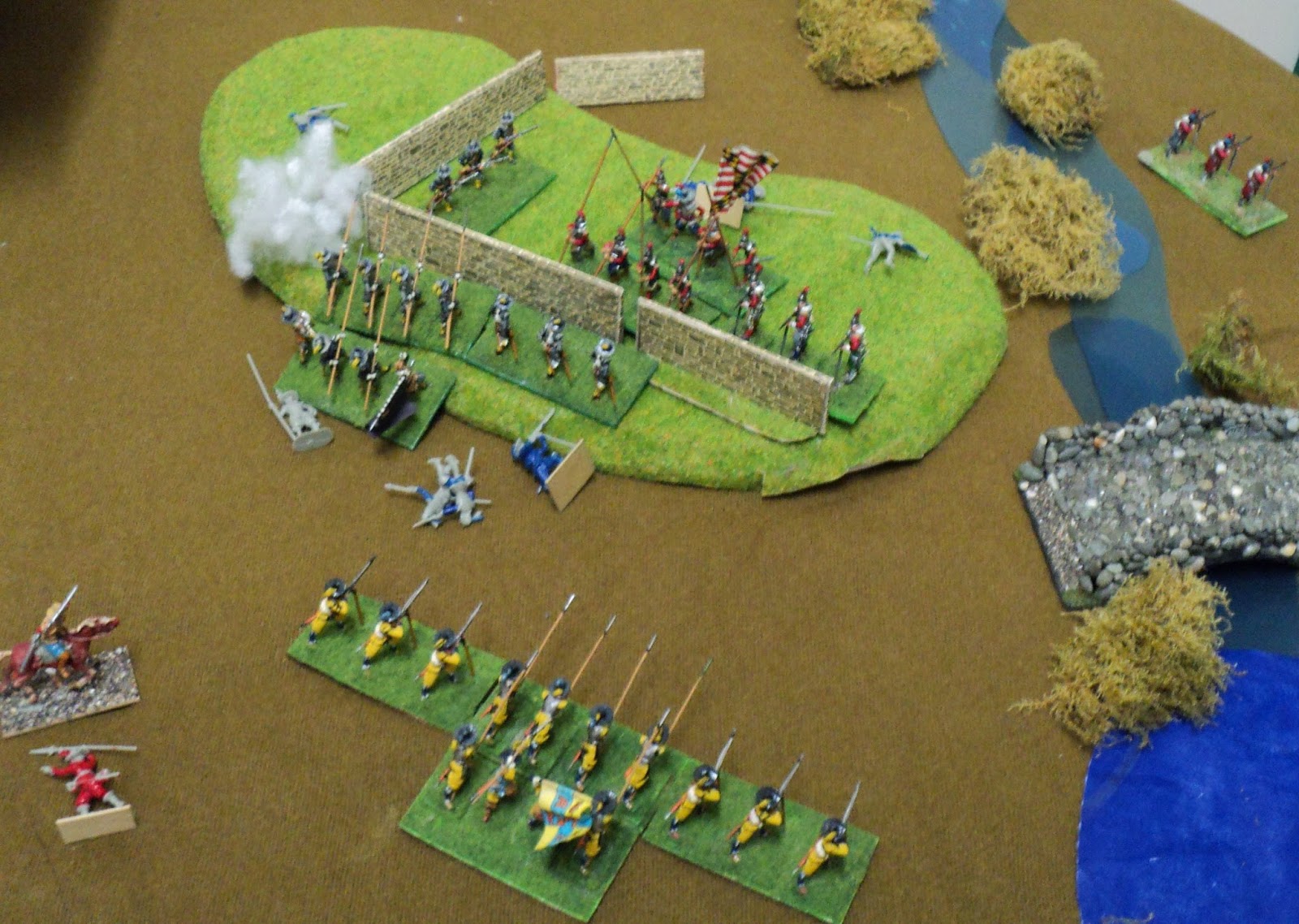 I can't say this play test was an unqualified success - there is quite a bit more to the game mechanics than meets the eye.  But it was a start...

Acknowledgements:
My thanks to four recent new followers:
99: Mauther (papermau)
100: Bacon fat (baconfat.log)
101: Lord of Excess
102: Corporal Trim
If the latter two will bear with me, I'll create links in my next posting.
One hundred followers: quite a milestone!


Posted by Archduke Piccolo at 6:26 PM