I really ought to be following up on other topics - something about combat game mechanics, marking the state of troops, play testing rule sets, and the opening battle that, in 1740, though the Emperor Violoncello was yet living, triggered the War of the Imperial Succession - but, to be honest, I'm just not in the mood.   Instead, how about some pics of stuff I've been doing in respect of my Army Men project. 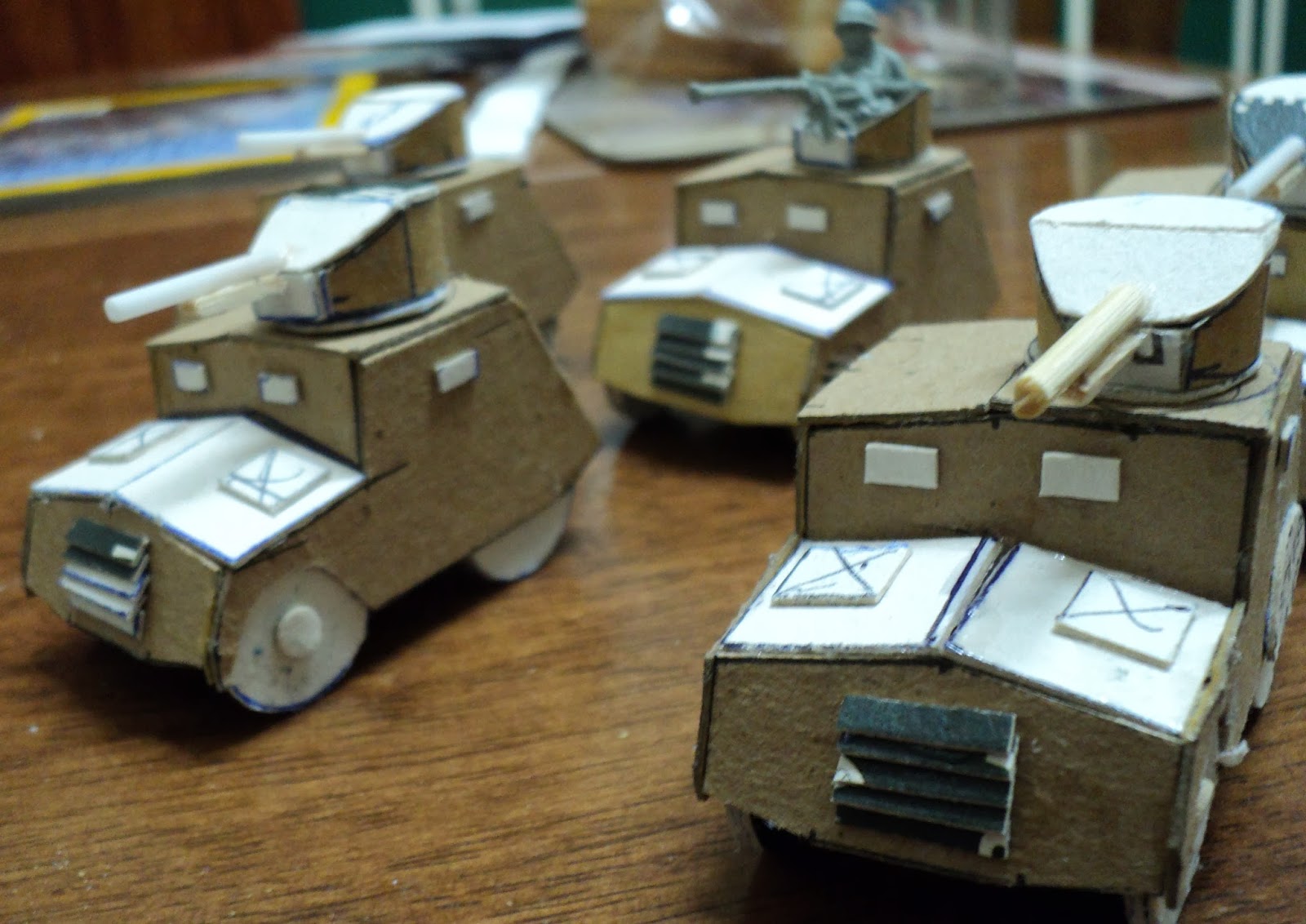 I began these 'Beaverbug' light armoured cars about 6 months ago, but until recently had only completed the hulls.  Here they are as of a week ago, with front grilles, engine hatches, vision slits and turrets added. 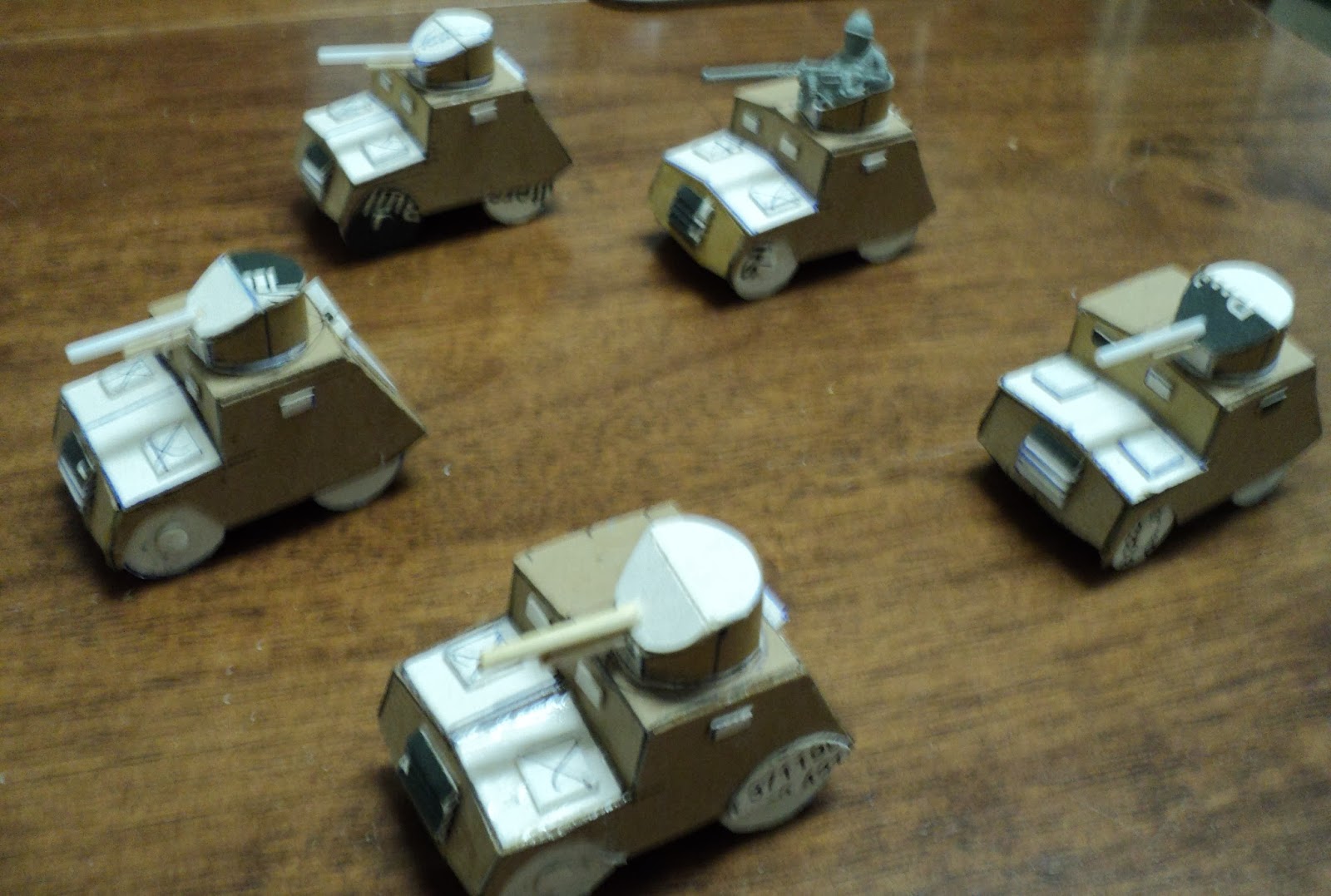 Four are armed with a light 20mm cannon; the fifth with a MMG.  The last was Brian's idea ('Uncle Brian' of A Fist Full of Plastic blog spot).  Originally I was thinking of a couple of these in a turretless 'open topped' vehicle, and a 'dry run' indicated they would have looked fine.  But in the end I stuck him in an open topped turret instead, and made just the one.  It serves as the command vehicle, offering anti-personnel support fire.

'C' Squadron, 17th Recon Group, on the march.  The commander in in the centre of the column. 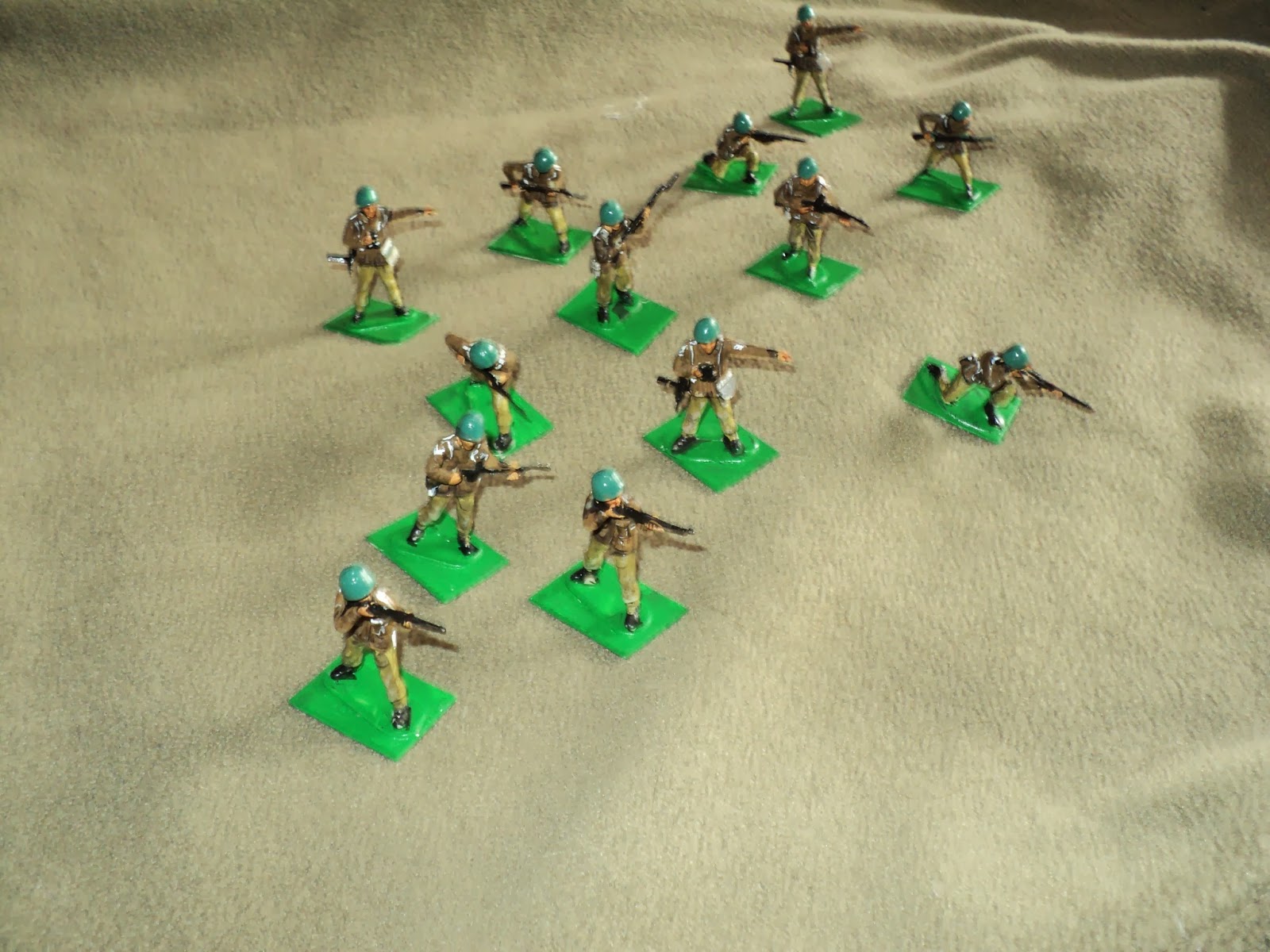 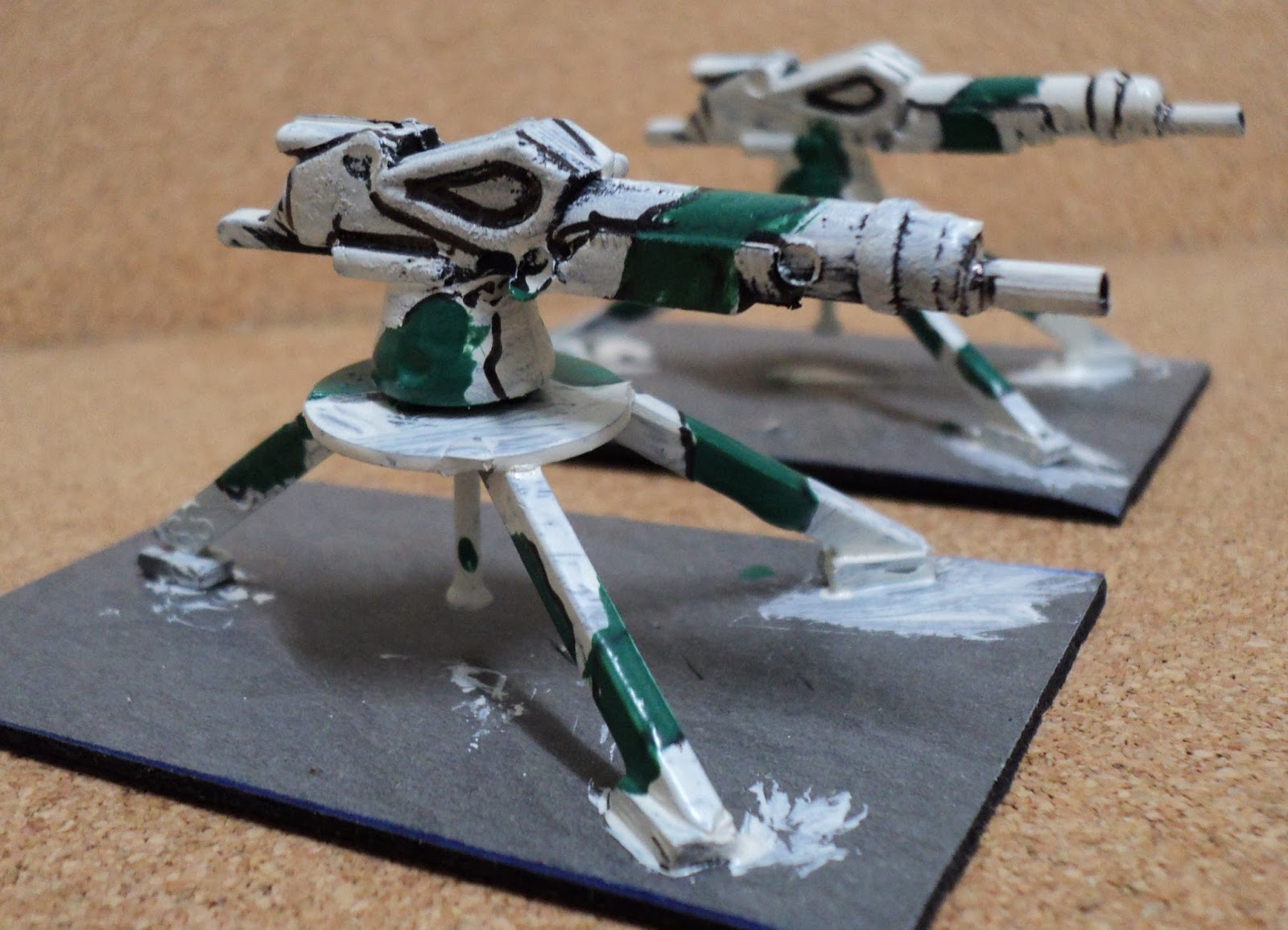 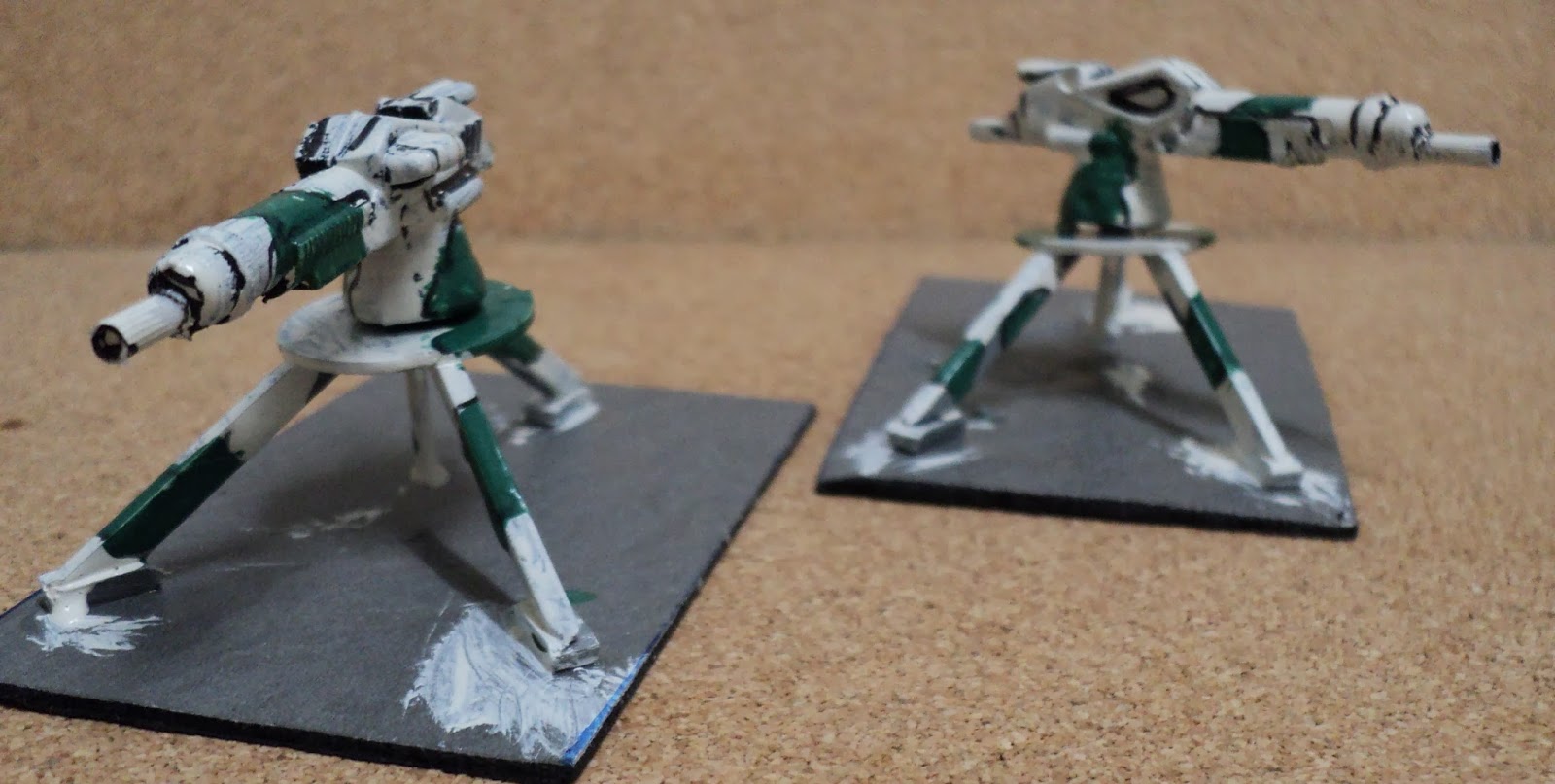 Now these things have become my Kiivar water-cooled HMGs.  The gun bit was originally the weapon atop a buggy-like vehicle that you will see below.  The turn table and legs were made from sprue pieces from the Wargames Factory 'War of the Spanish Succession' figures.  A brad driven through the circular sprue centre and into the base of the gun gives it a traverse capability. 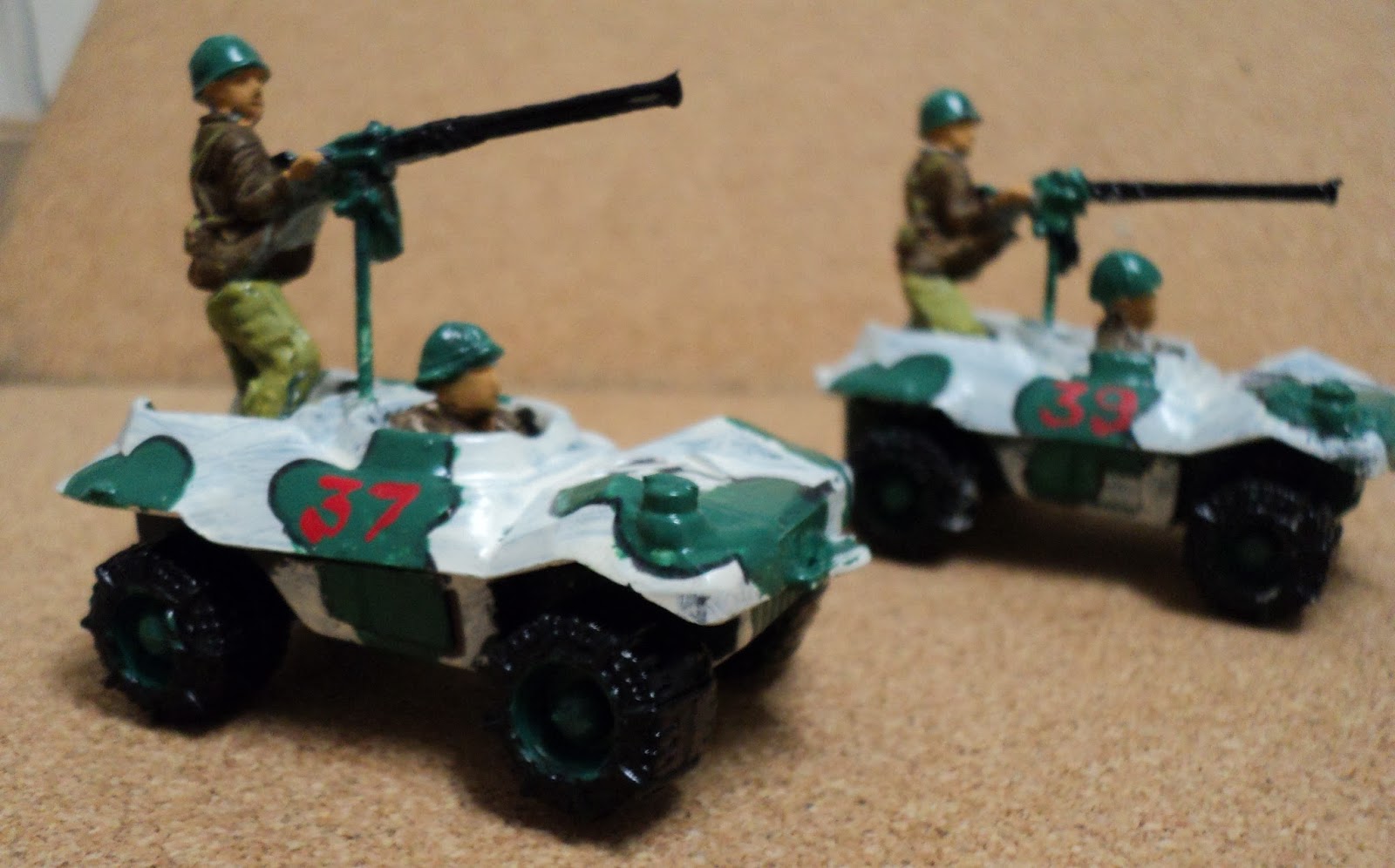 These are the vehicles that originally transported those weapons about.  A heavily trimmed and cut down figure has become the driver, and a great deal of surgery was done to achieve the standing machine-gunners.  I can't say it was a tidy job, but they don't look too bad from a distance. 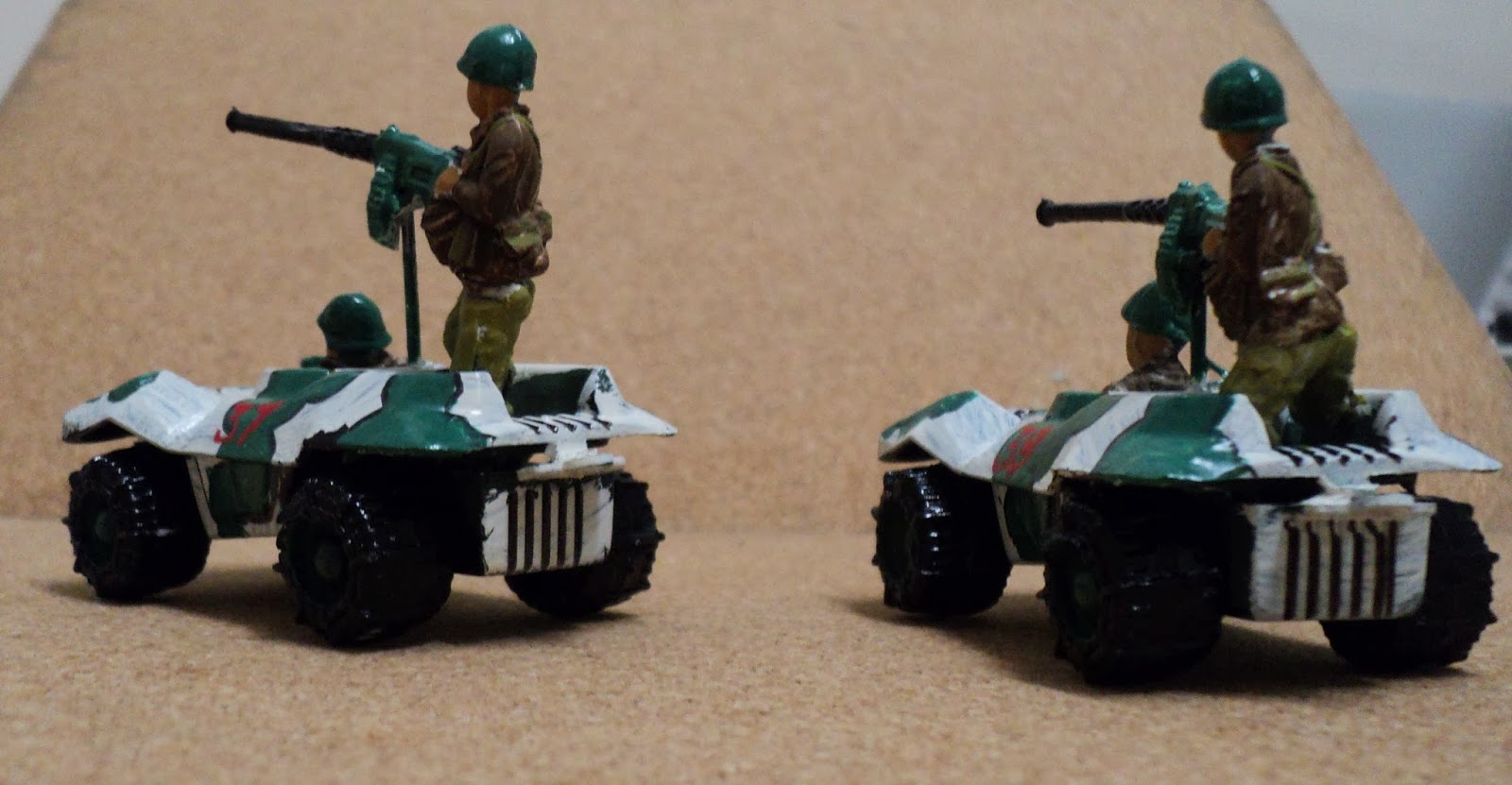 The  camouflage scheme on these scout buggies I've decided as the standard for the Kiivar Army, though it is intended as a rag-tag sort of affair. 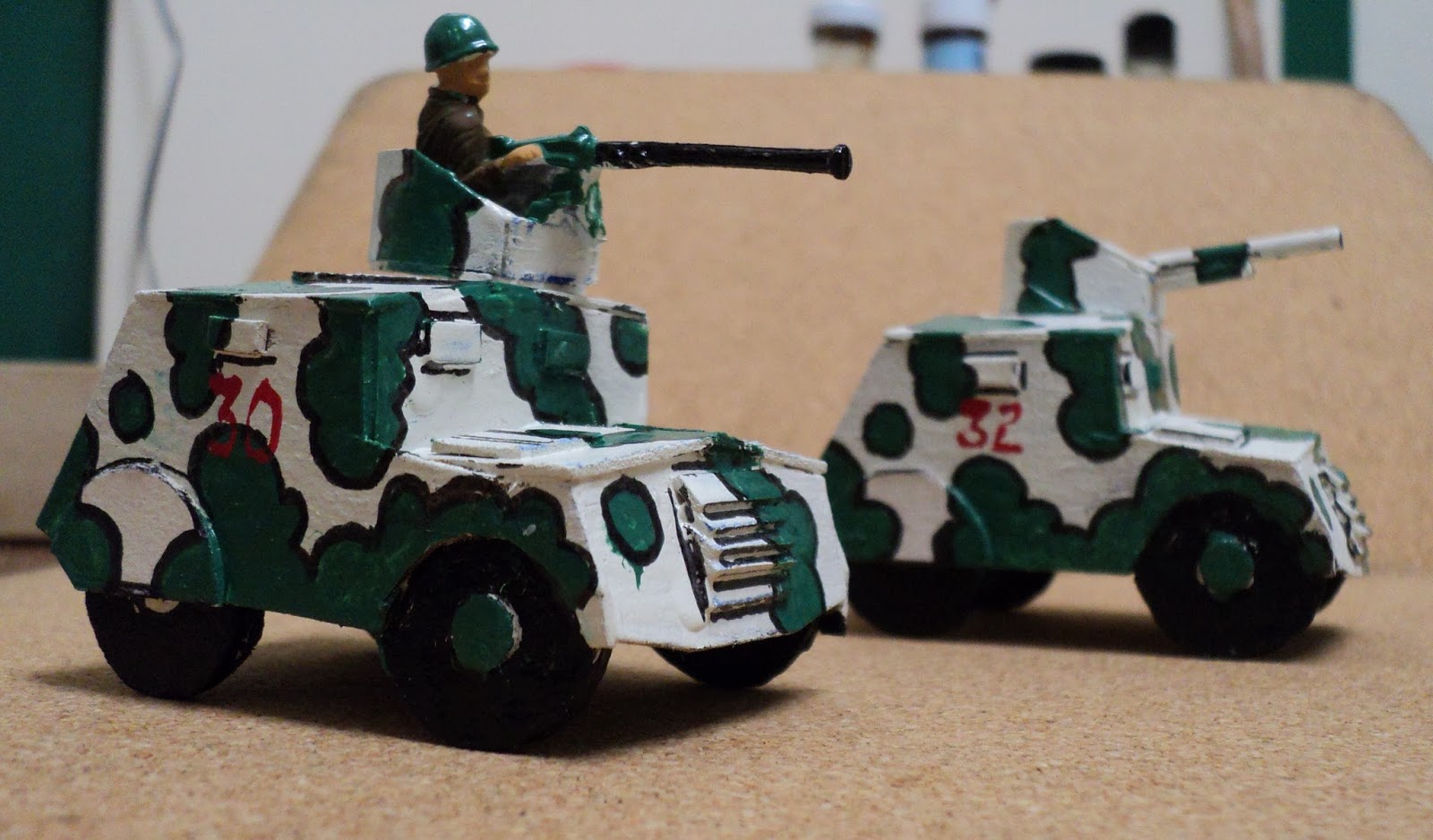 The Beaverbug Armoured Car Squadron in its final livery.  The first digit of the vehicle number indicates the squadron - 'C' Squadron in this case. 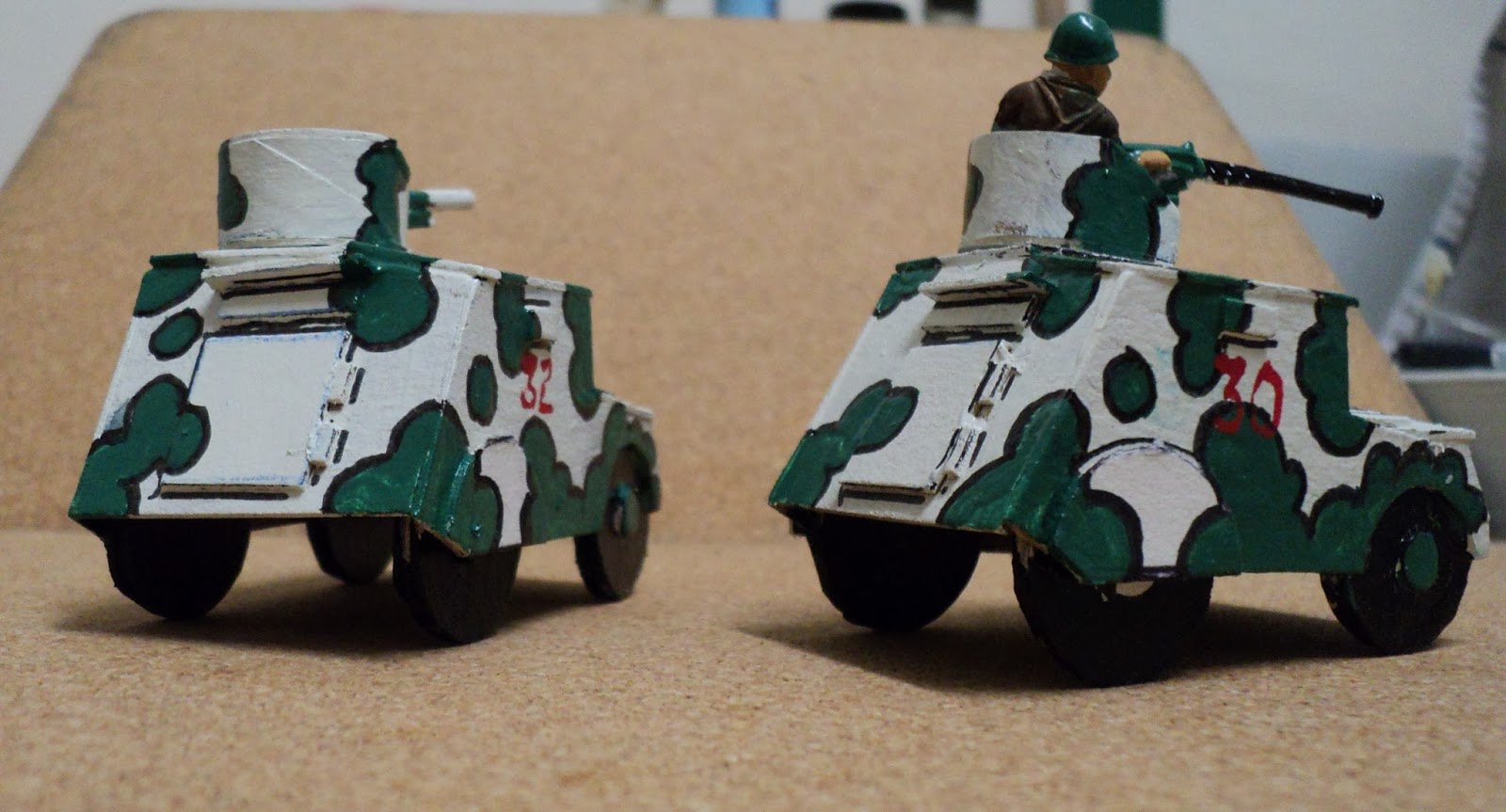 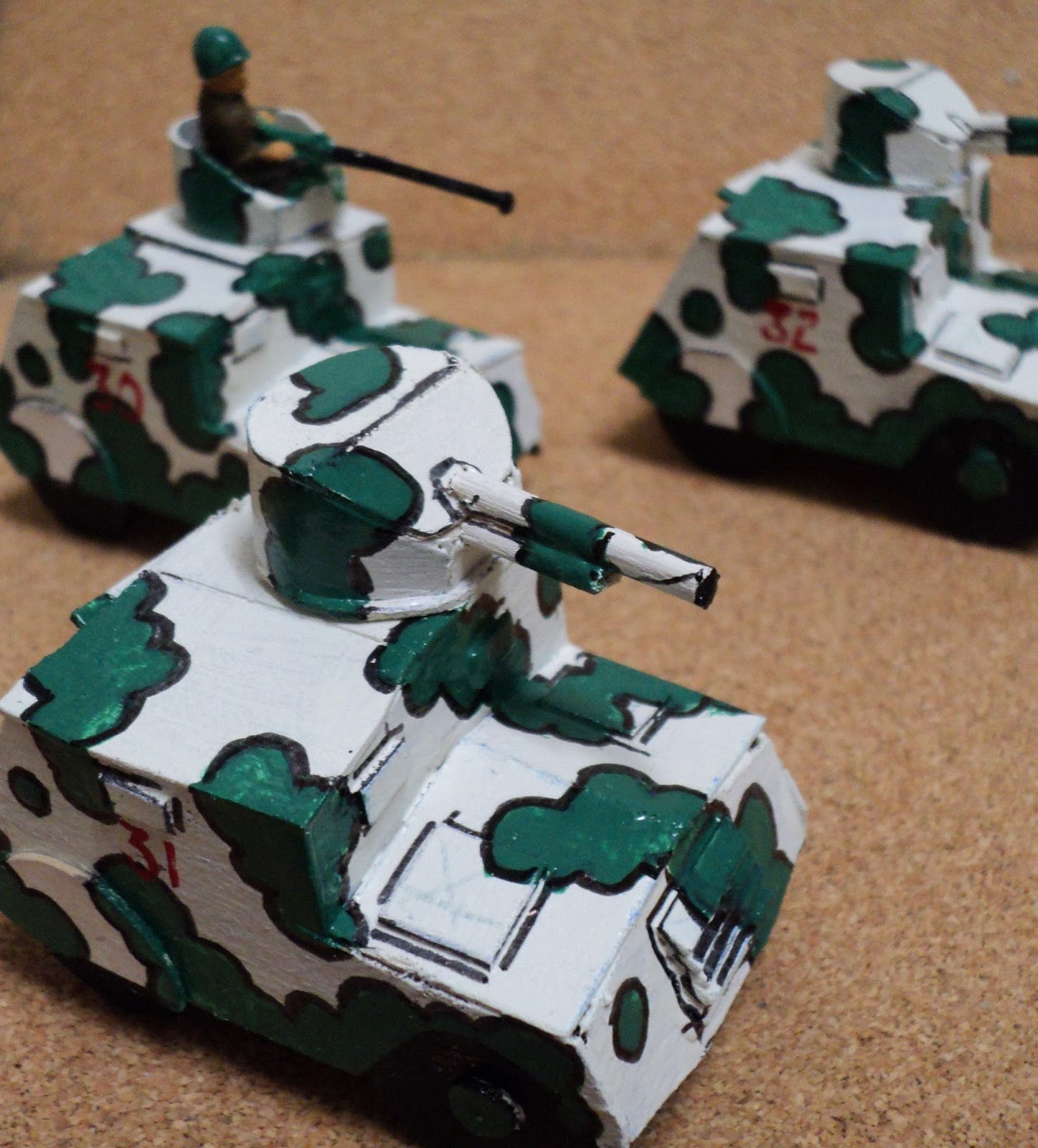 I've used house paint on these, a good deal of it left over from painting the kitchen just before Christmas: a very light beige and a darkish green.  The green is heavily outlined with black marker pen.

The next few pix I've added 'cos I think these little guys make a handsome force of armoured cars. 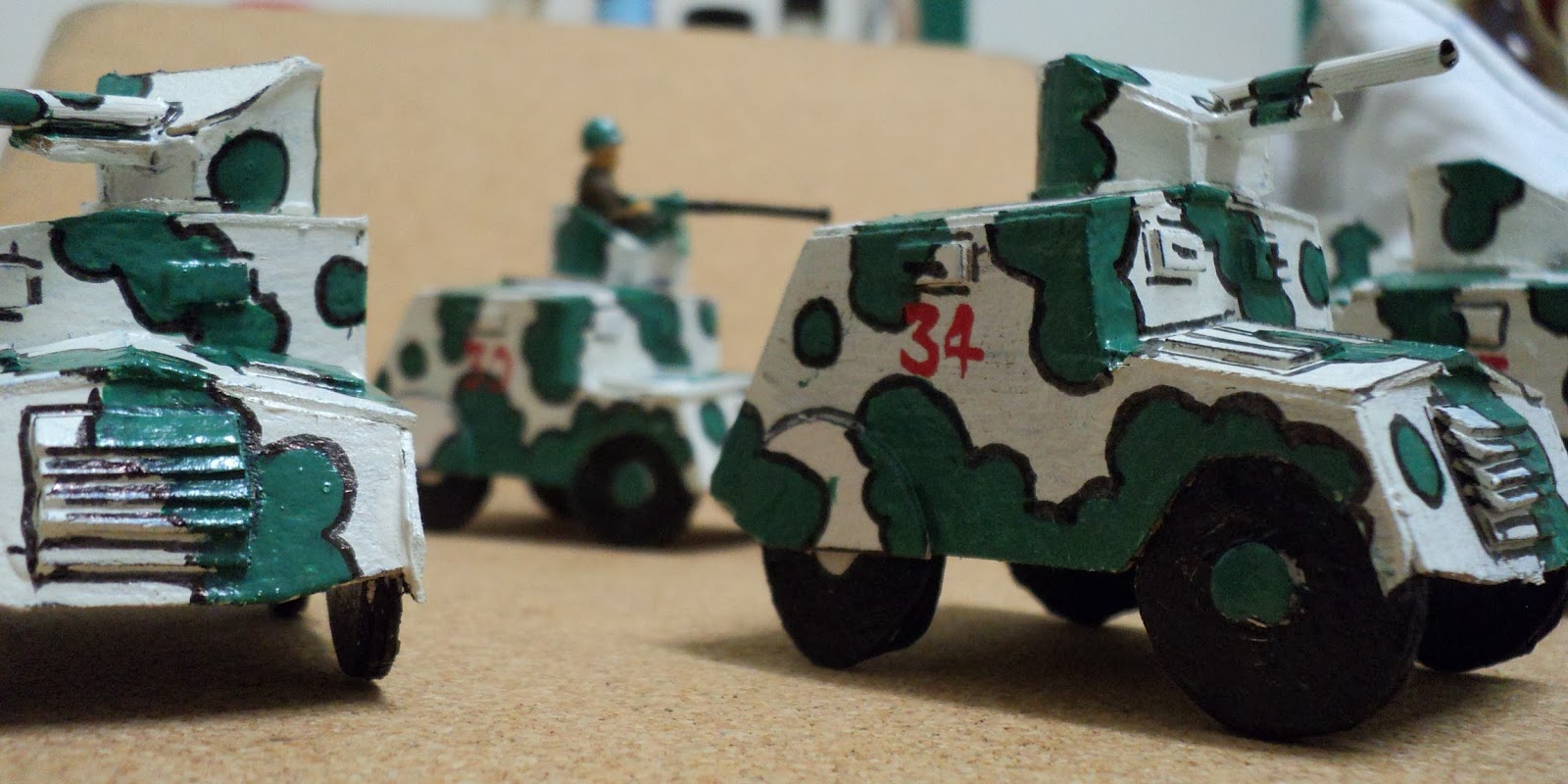 Of course these are light vehicles, two of a crew (driver and commander/gunner), of moderate cross-country performance, so not what you would call 'fast'.  The Raesharn equivalents will be larger and faster, and possibly armed with a coax cannon and machine gun - unlike the single weapon with which the Beaverbugs are equipped. 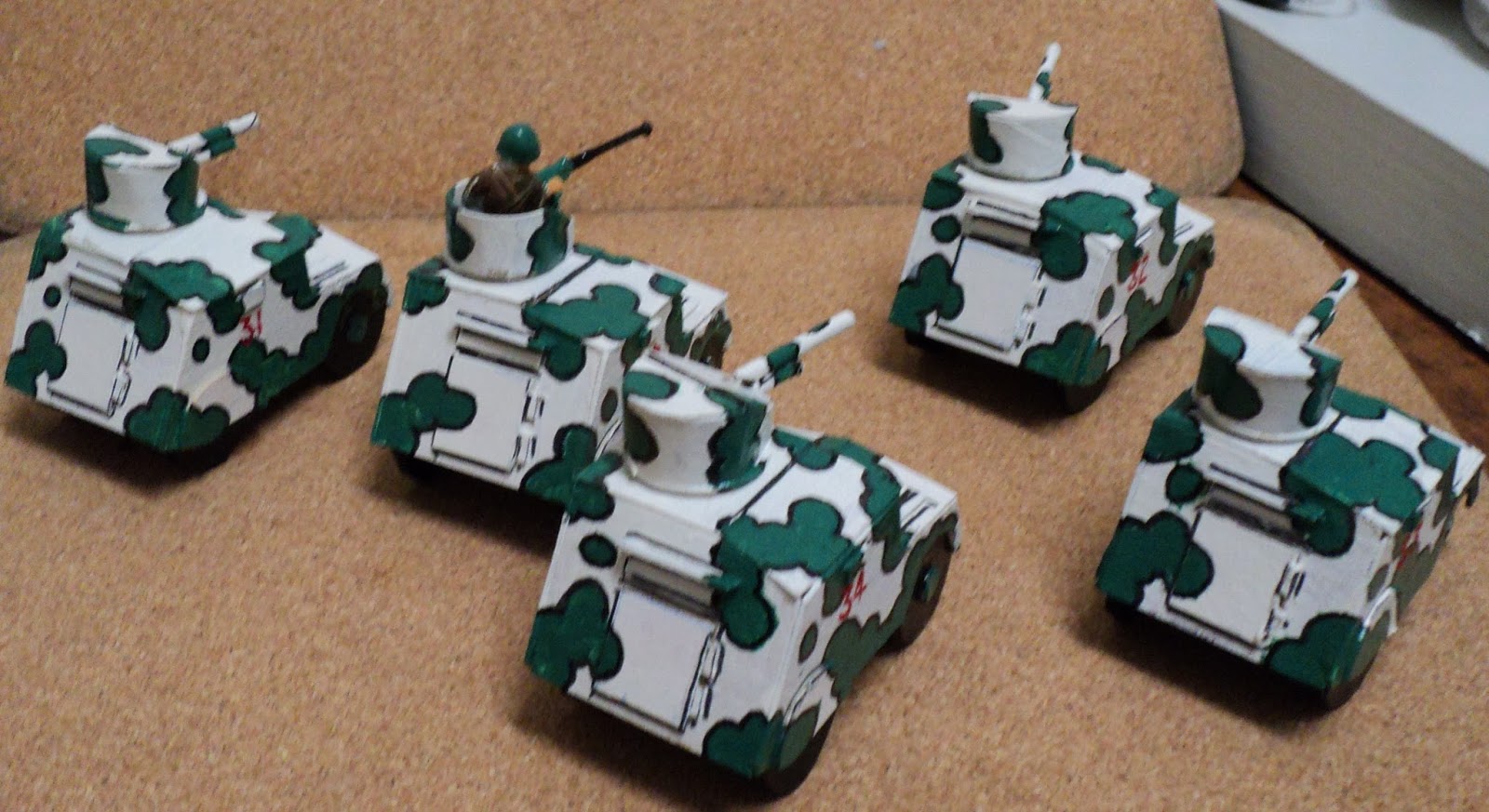 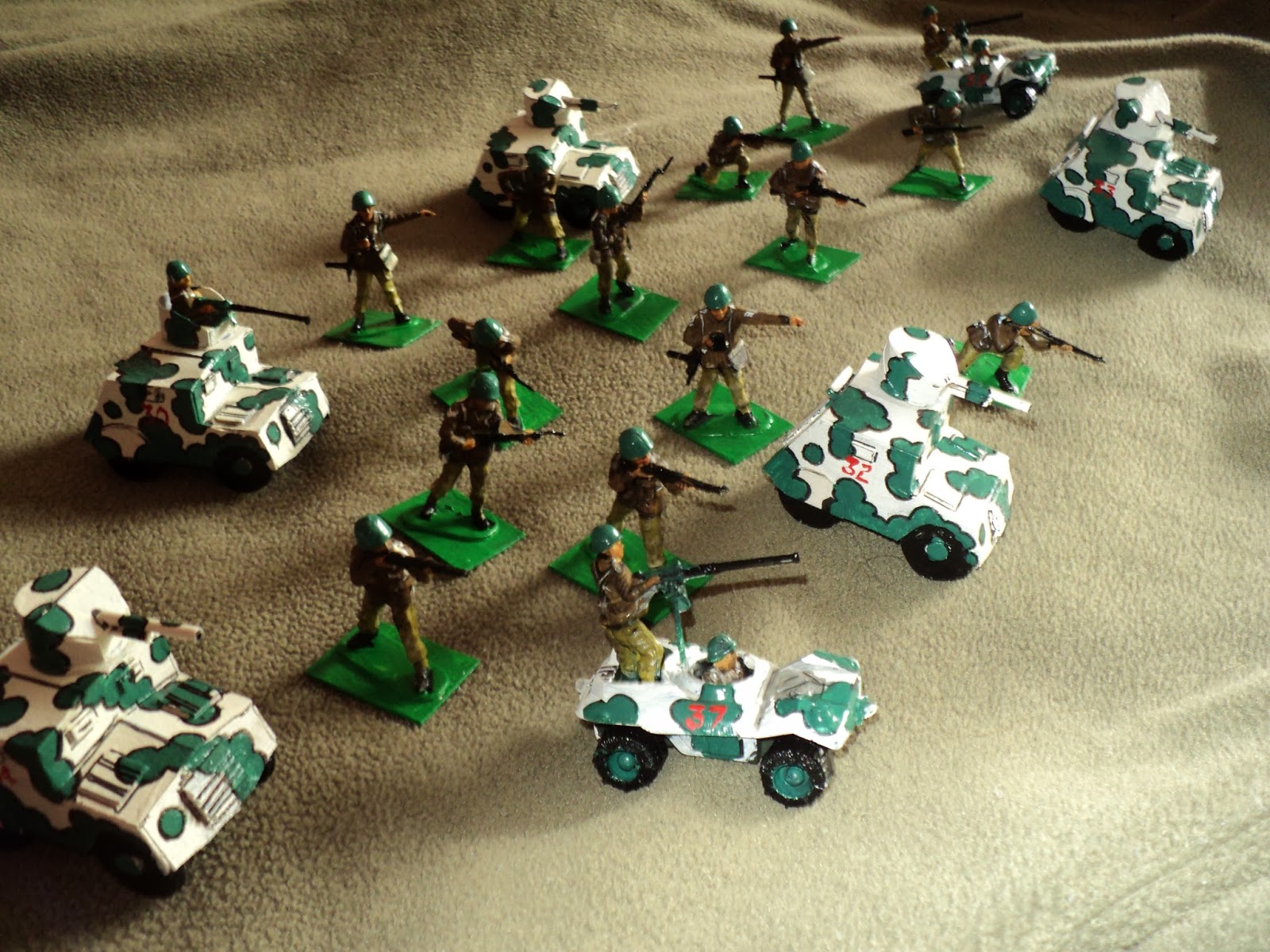 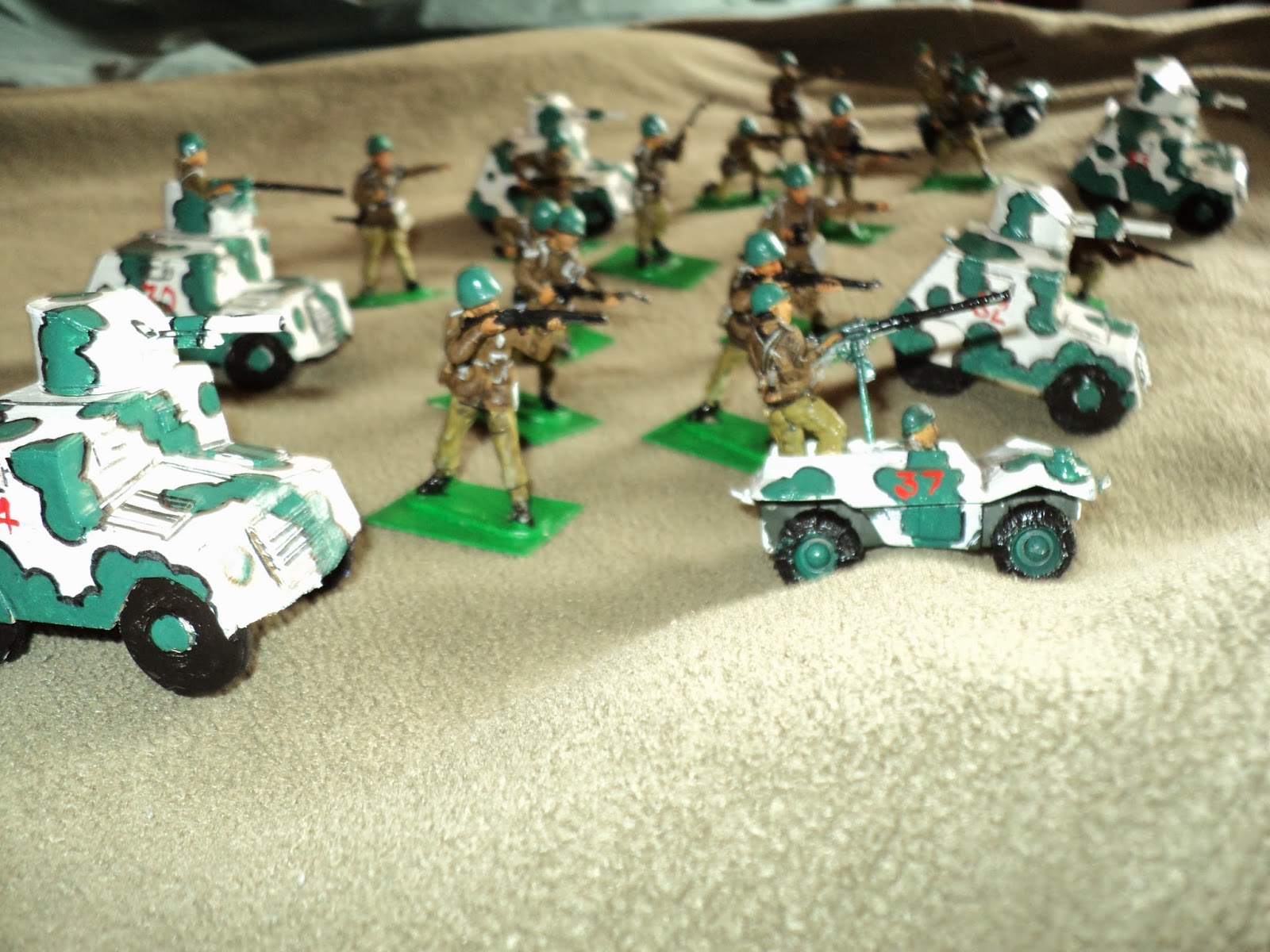 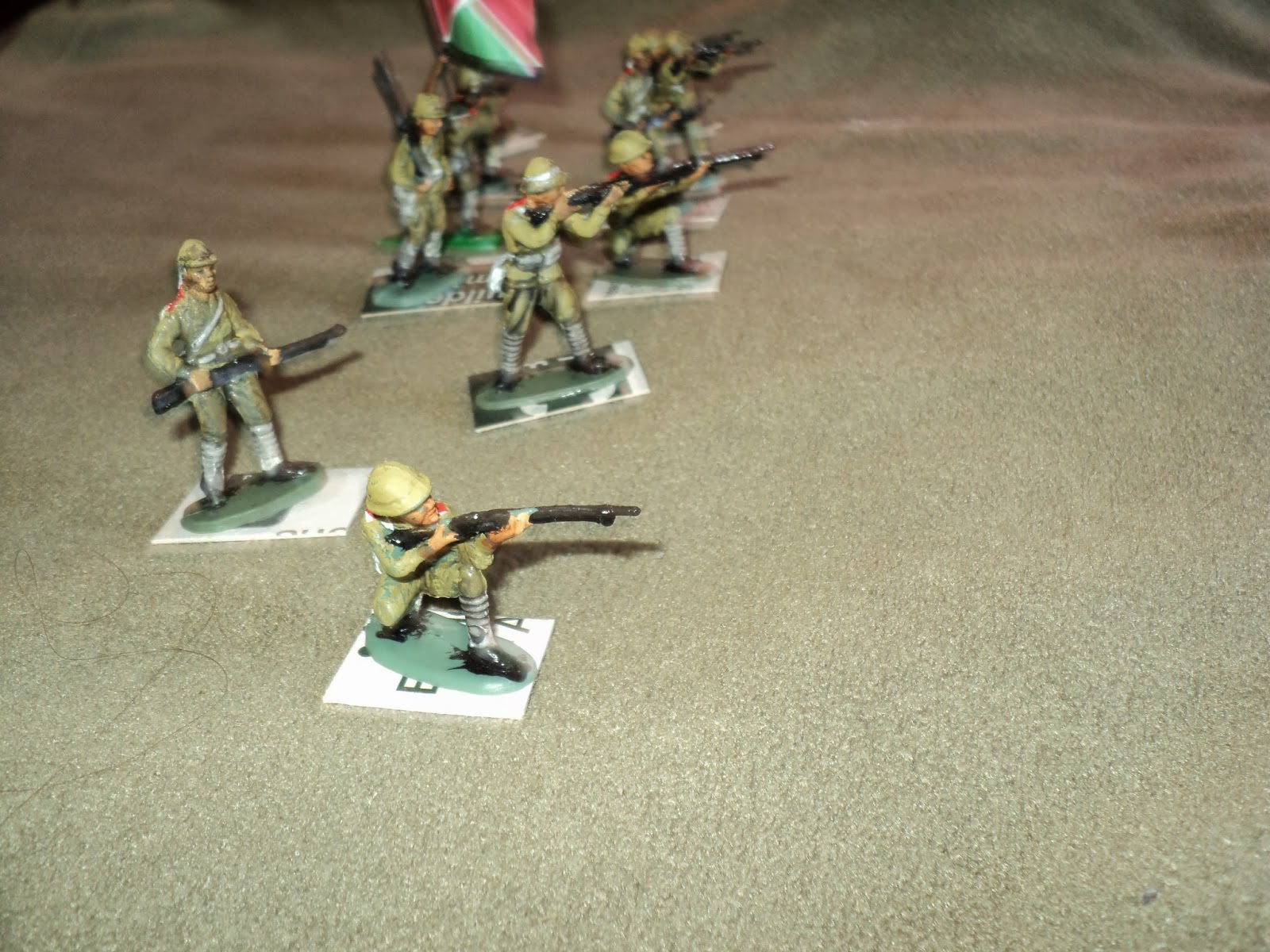 Finally, I painted up the very few recognisably Japanese figures as a section of the infantry of Omez - allies, or more accurately, auxiliaries to the Army of Raesharn.

The yellowish uniform colour, with an ink over-wash (Nuln Oil) comes out rather well, though the paint job itself is pretty untidy.  The putties and webbing has been done in an off-white, pale beige colour and also over-washed.  A single section won't do, of course, so I'll probably add in other figures to bulk them out into at least a platoon of 20 figures, and possibly a 2 or 3-platoon company of 50 or 60 figures.  One thing I'm not short  of is Army Men figures! 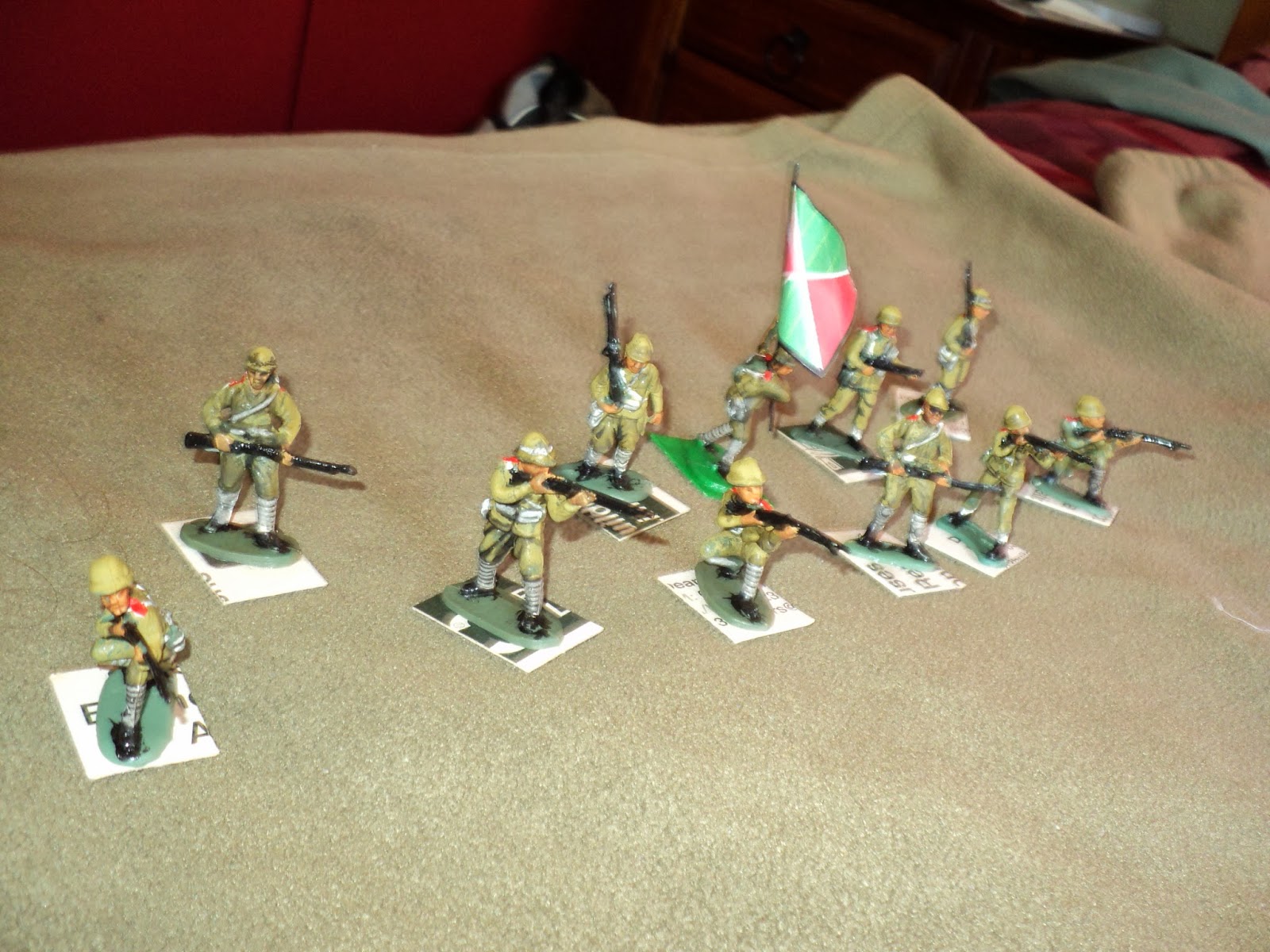 Posted by Archduke Piccolo at 3:00 PM