Follower 103.
First of all, my thanks go to the 103rd follower of this blog spot:  Corporal Trim.
For his fascinatingly eclectic collection of miniatures, ranging from flats to Army Men (you should see what he does with Army Men!), check out Castles of Tin.
He also has a pretty popular blog spot specializing in 'The wars of Louis Quatorze'.
Check 'em out.

More army Men - plus!
A couple of days back, Brian dropped by bearing gifts from the Coast (Aaron and Paul): a whole bunch of useful stuff in the Army Men line that near on rounds off my armies.  Many thanks, guys!

First of all: several more Army Men guys to add to the fun.  There's a few officer type figures in there that will help fill gaps in command, and the odd 'sailor' figure to add to my Naval Field Artillery battery.   There's one or two prone LMG men that may be re-issued with anti-tank rifles.  I have rules for ATRs so I might as well have some ATR men!  Do you know, in all the hundreds of Army Men guys I already have, only two others were prone figures, and they really had to remain as LMG men... 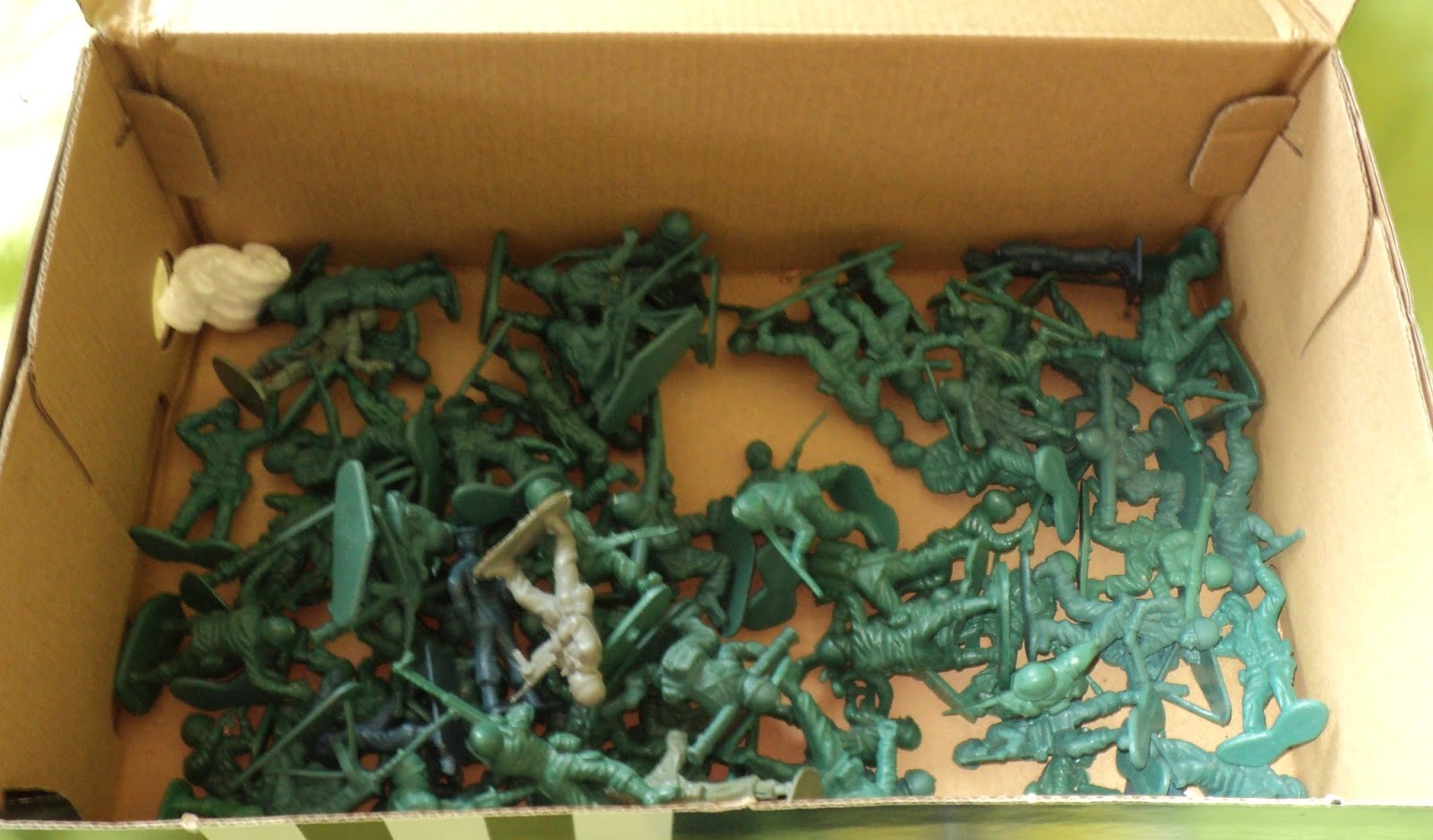 There's a few fixer-uppers here - wheel shortages mainly - but that's fine.  Fixer-uppering is no problem (when I find those wooden wheels that I know are kicking around somewhere!).  I'm just glad to have these two 3-gun light-field batteries!  I did toy with making them anti-tank guns - and will probably allow them some anti-tank capability at that - but they look too much like field artillery to have them any other way. 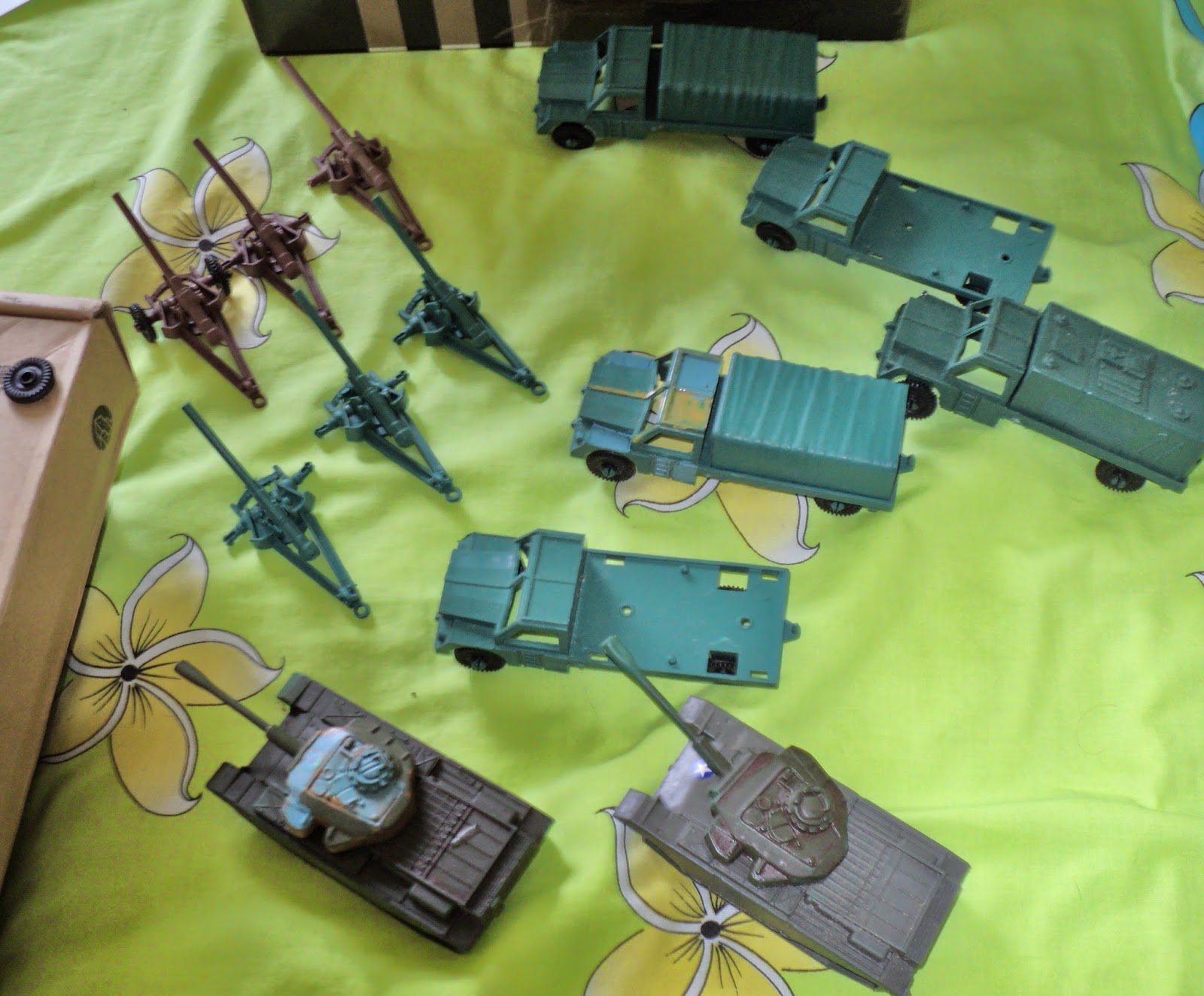 The two Centurion Tanks were a whisker different in size, and a tad larger than the two I bought around Christmas time.  There's so little difference I decided to put them in a single Squadron, with the smallest two being Mark Is (a Mk I what, I'm not sure!), the middle one a Mk II, and the largest a Mk III.  With my One Brain Cell rule set, the Mk Is will count as having Medium armour protection and armed with a Medium anti-tank gun; the Mk II Heavy armour with a Medium gun, and the Mk III, Heavy armour/ Heavy gun. 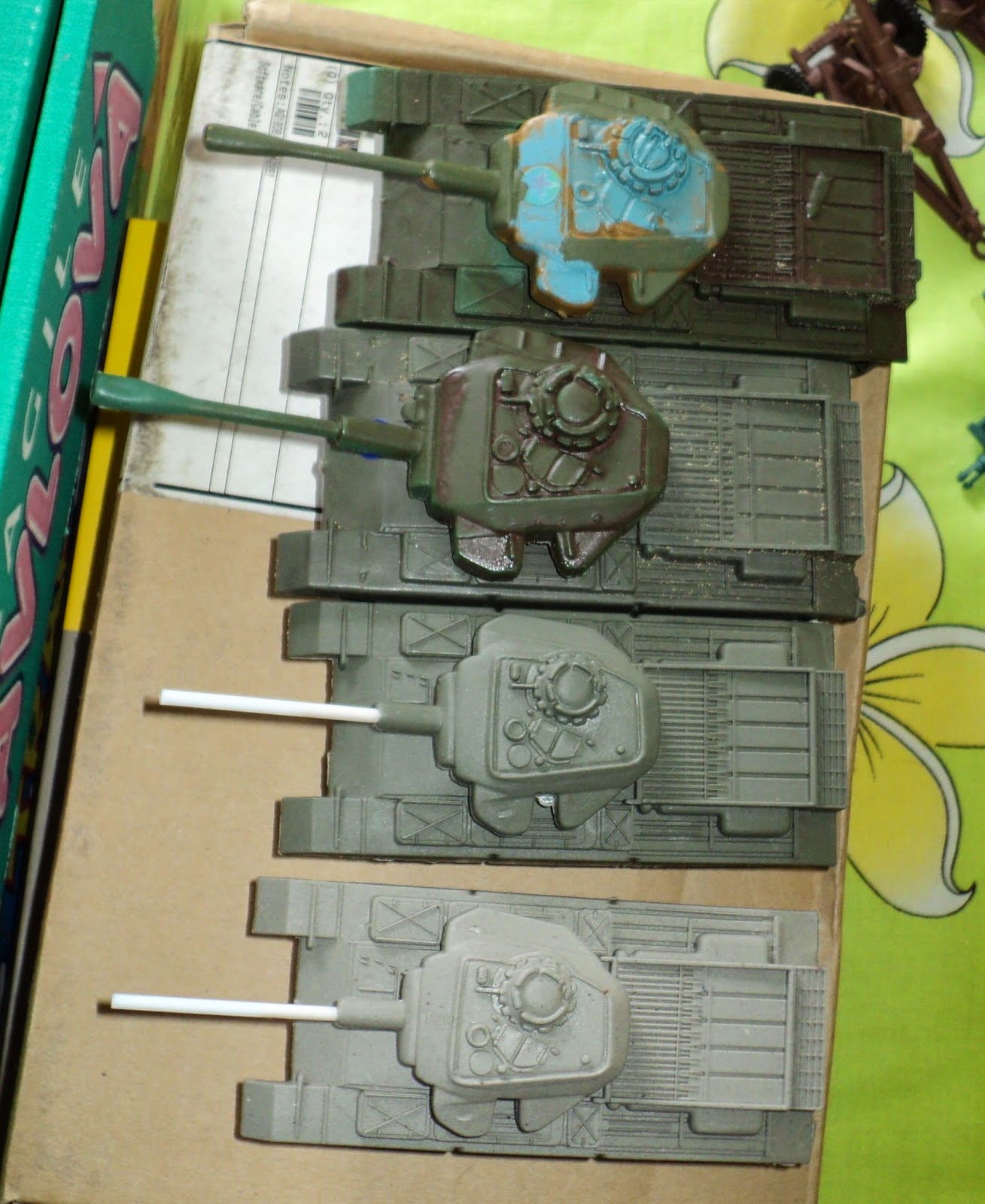 A comparison with the size of the PzIV(G)s I bought on the coast about 18 months back shows that the biggest of the Centurions is roughly of a size similar.  The PzIVs, I count as carrying Heavy armour and a Heavy gun. 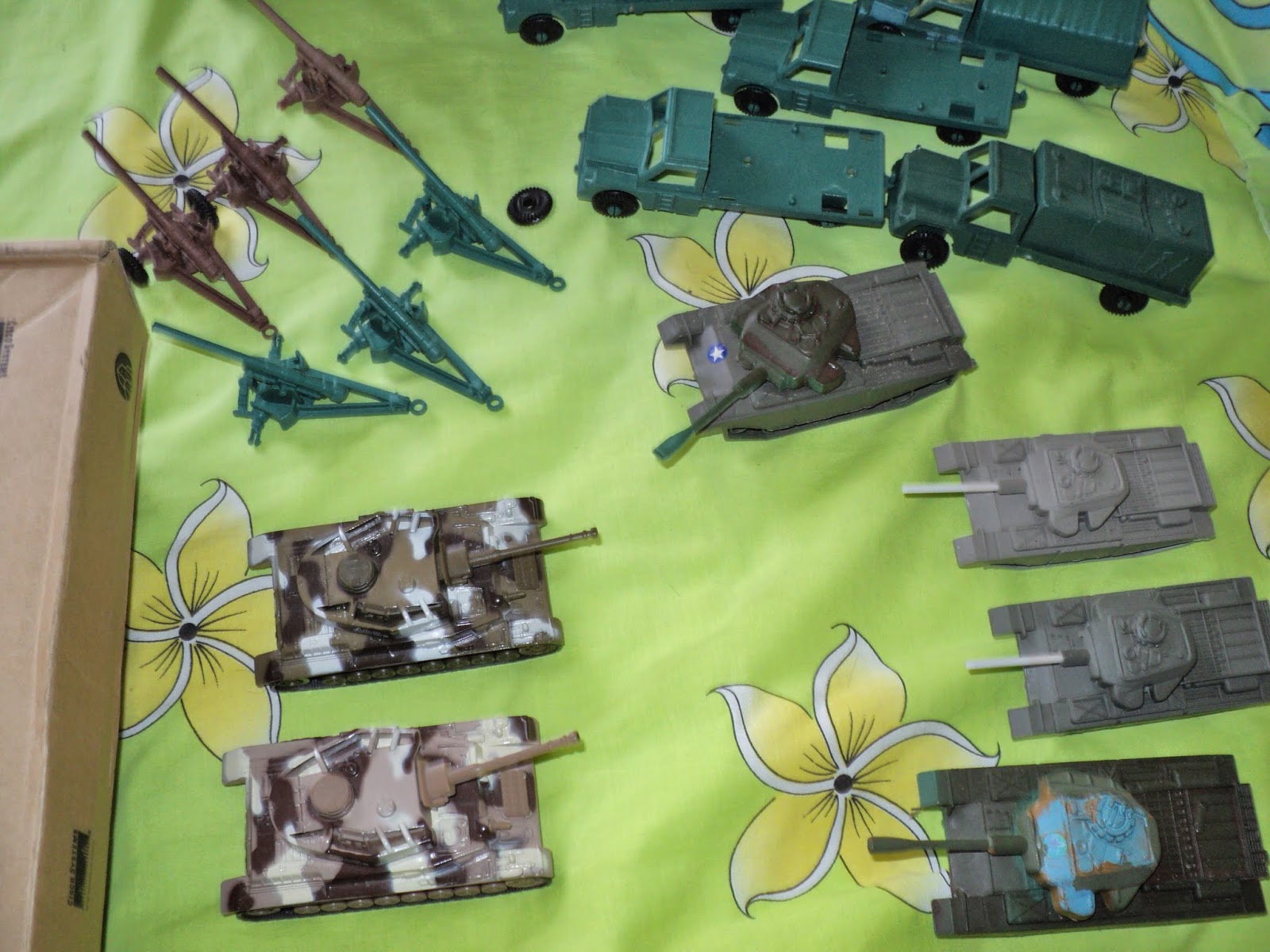 Meanwhile, the flat bed trucks will probably receive cardboard and paper tilts,  but the one with what looks like a steel superstructure on the tray will likely become an HQ vehicle of some sort.   Altogether a very pleasant surprise.

Meanwhile, on an entirely different topic, Karen and I visited a 2nd hand bookshop whilst waiting for some WORD and EXCEL software to be downloaded onto my machine.  And look what I found! This makes a pretty large sized paper model - completed, it's over 45cm long - of a late 16th Century English Galleon in full sail. 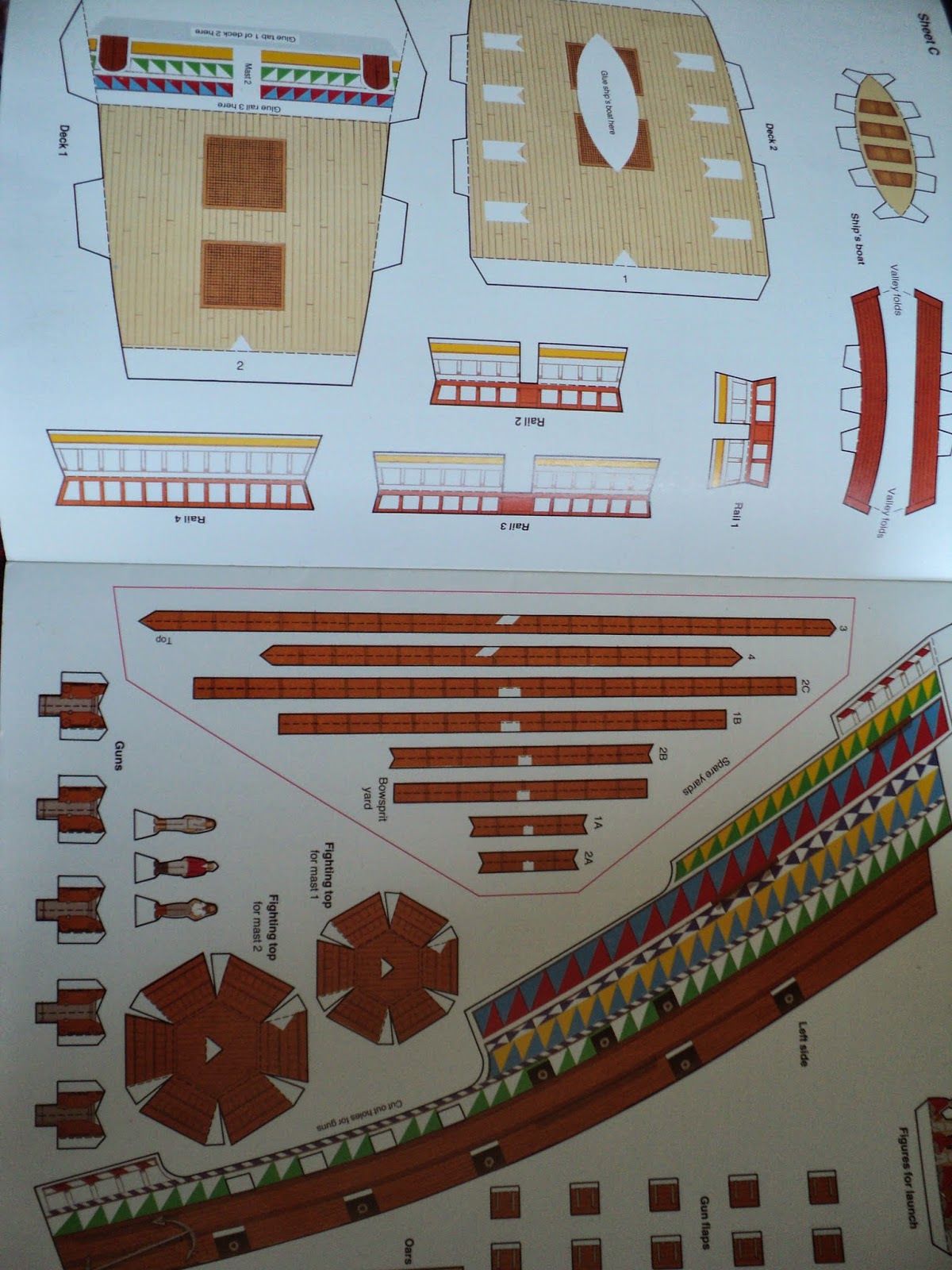 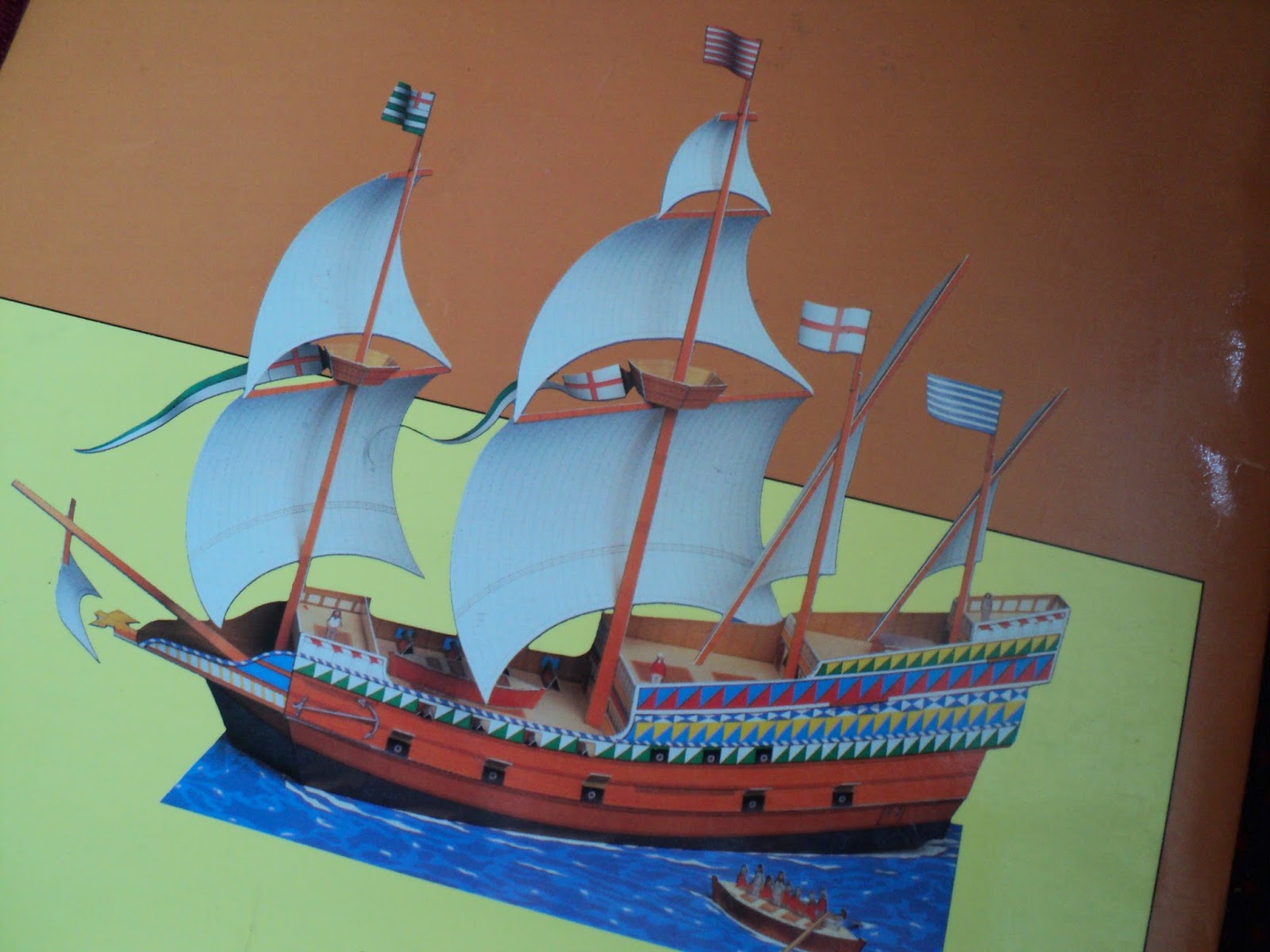 What the finished model should look like, broad reaching on the larboard (port) tack.  It could be crewed with 15mm metals or 20mm plastics if you want ship to ship action... I still have Brian's two merchant vessels to complete and paint up.  In my view this would make a fine addition. 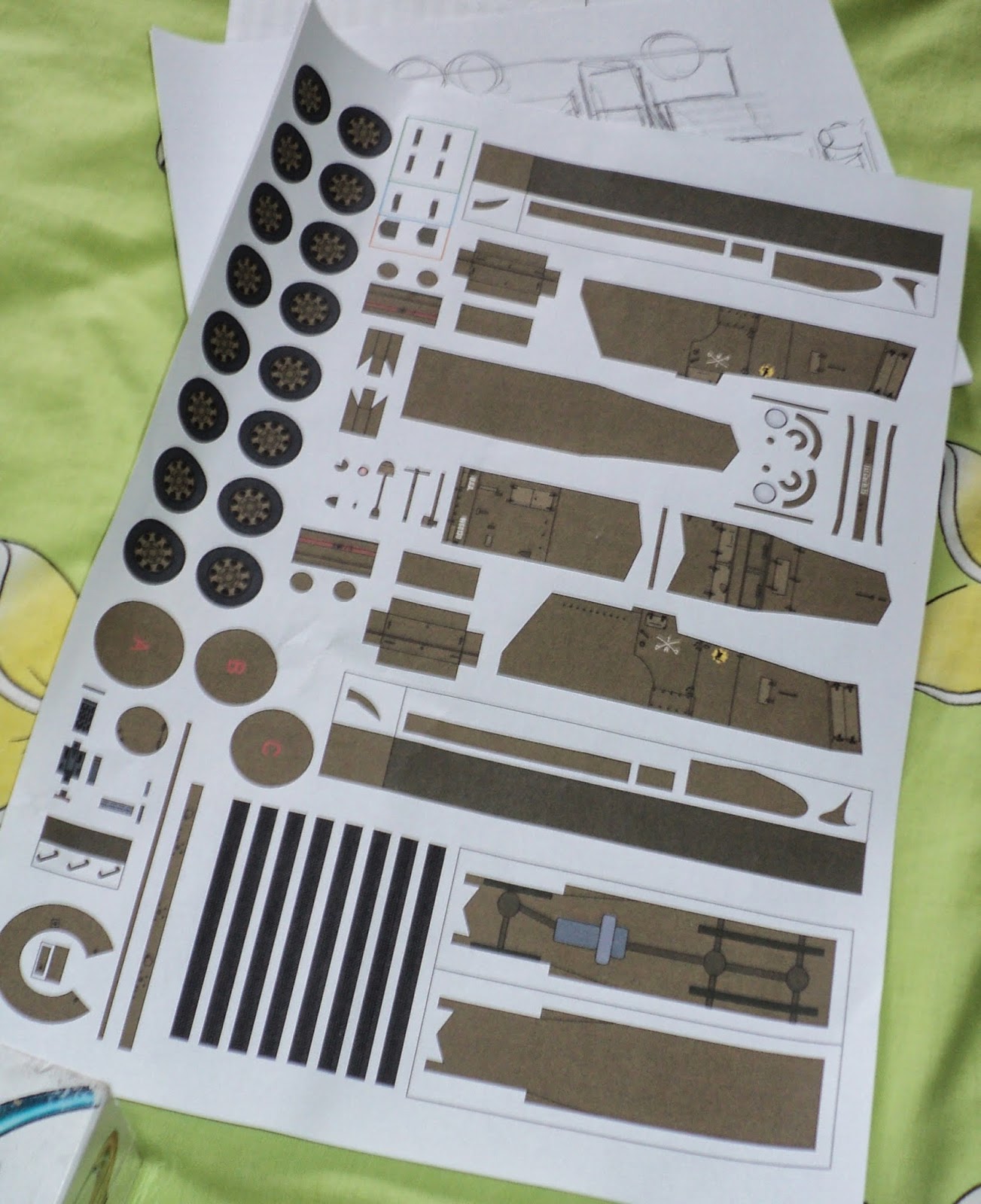 Finally, something from 'Papermau' paper models: an armoured car.  The Imperial Army of Raesharn will receive two or three of these...
Posted by Archduke Piccolo at 1:40 AM