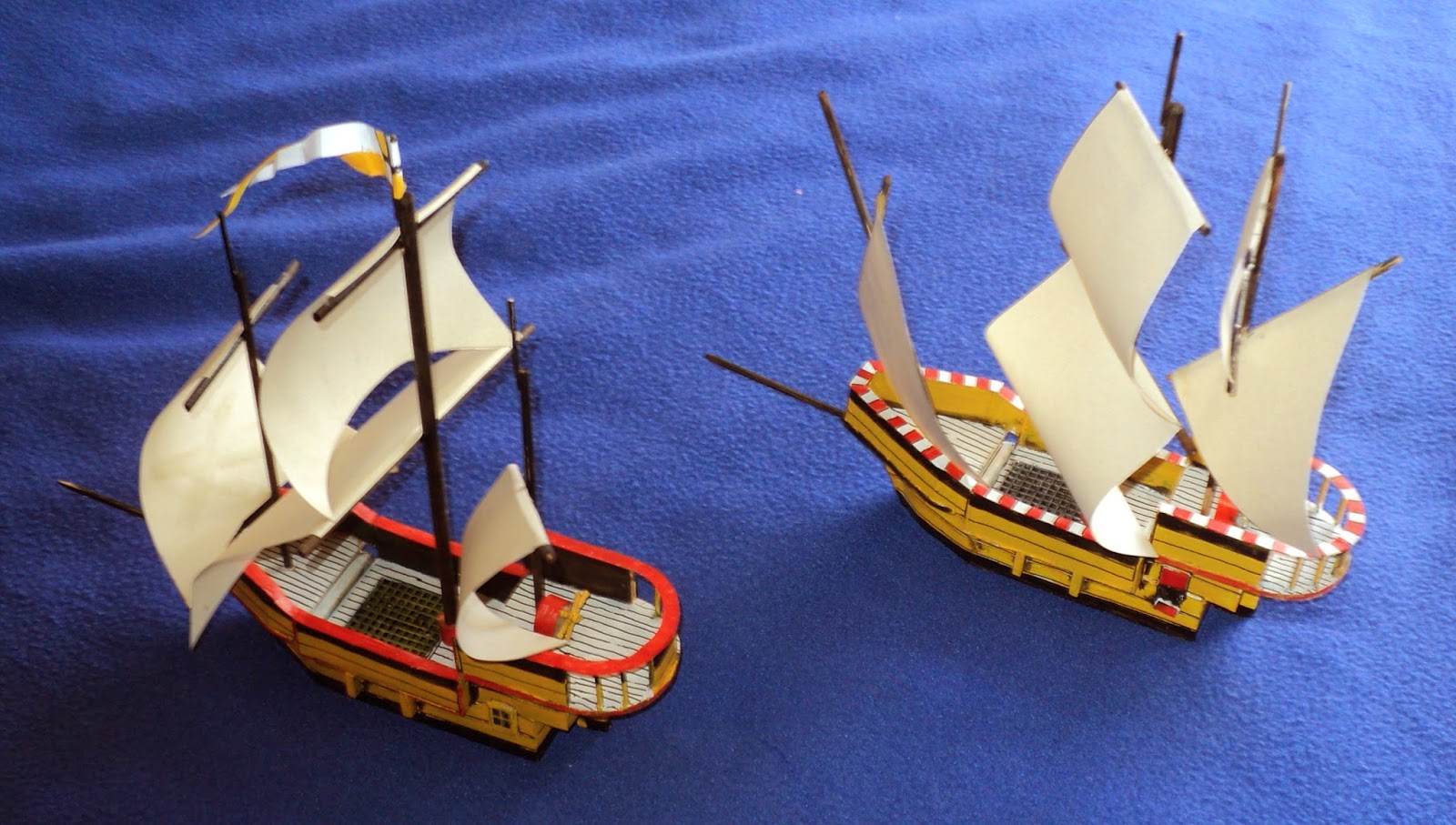 These merchant sailing vessels - intended to be part of Brian's (A Fist Full of Plastic) mercantile marine - are almost complete, sufficient to check out how they look on camera.  Regular readers will recall that I was 'commissioned', for several considerations already rendered, to complete a pair of vessels begun by Brian's pal, Frank. 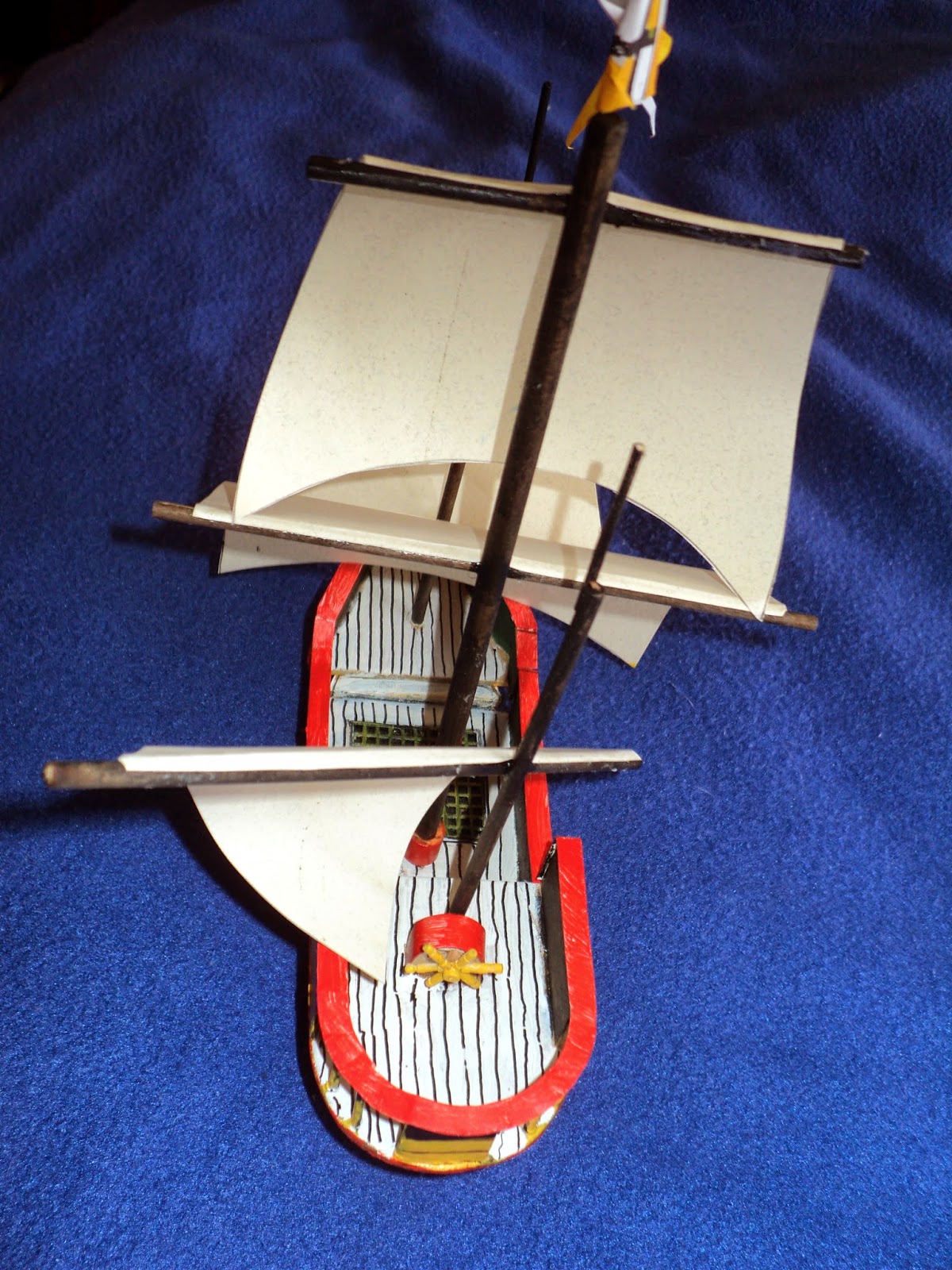 Though not yet complete - some cosmetic work still to be done (guns for the polacre, and possibly crows' nests just above the main yards, touching up the paint work), I reckon they're coming along.  The above is a square rigged three-masted ship probably best called a caravel.  The deck planking has been drawn by hand; the fore and mizen masts are skewers; the main a length of dowel.  Strictly speaking, all masts should be in two or three pieces, but it was a whole deal simpler just to make single piece masts.  It was bad enough getting the yards to stick! 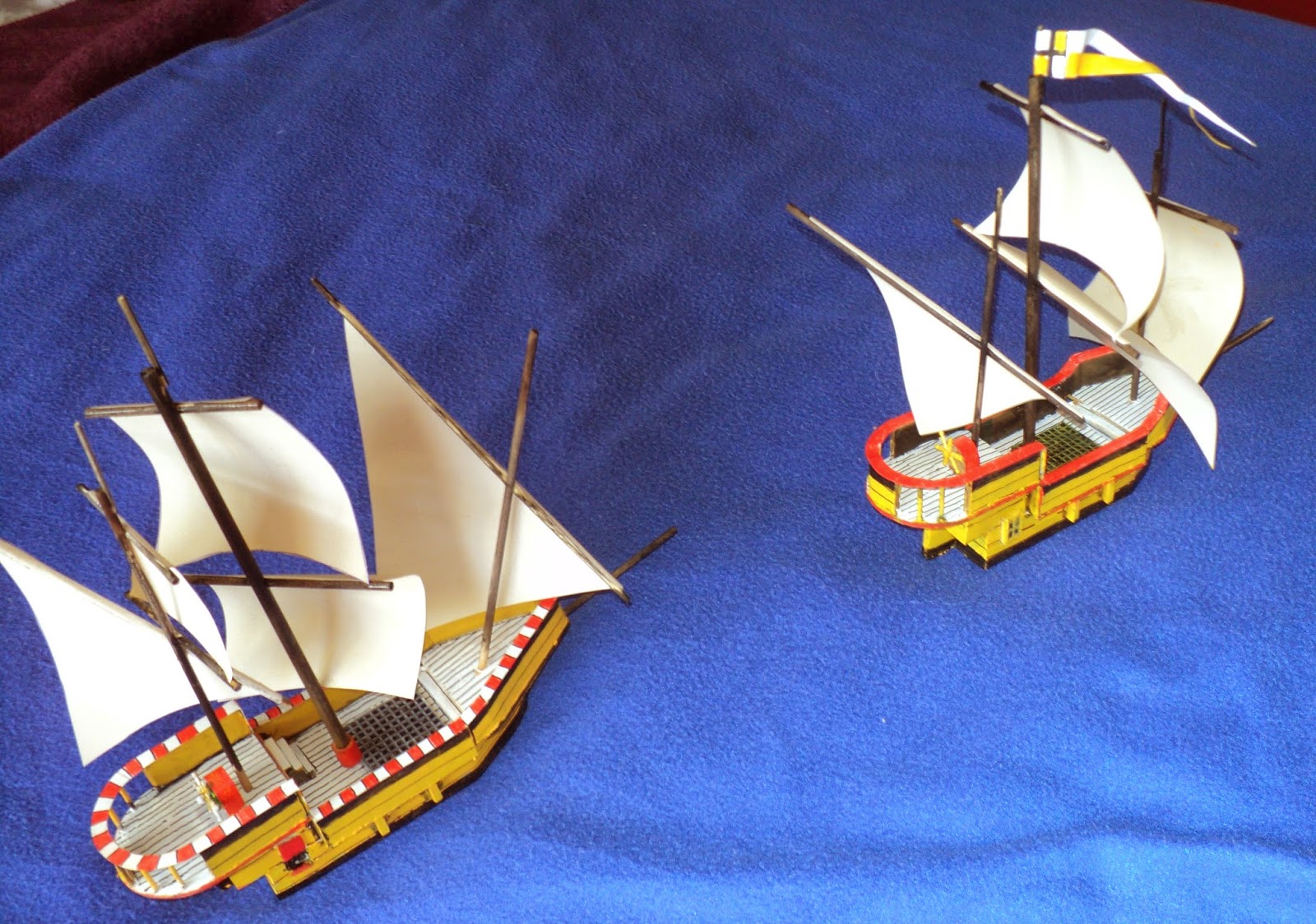 The trailing vessel in the above picture I thought would would look good polacre-rigged - with the foremast raked forward in a very pronounced fashion and carrying a lateen sail.  As these vessels are intended to be fairly small craft - not really ships even though they have three masts - the polacre rig is appropriate enough, I think, and gives the two vessels quite disparate characteristics from what are almost identical hulls.  The sails are paper, a fairly heavy stock, a pale buff coloured.  It appears someone has let fly the main course on the caravel - a simple 'fix', as it has been glued only along the main yard on this vessel. 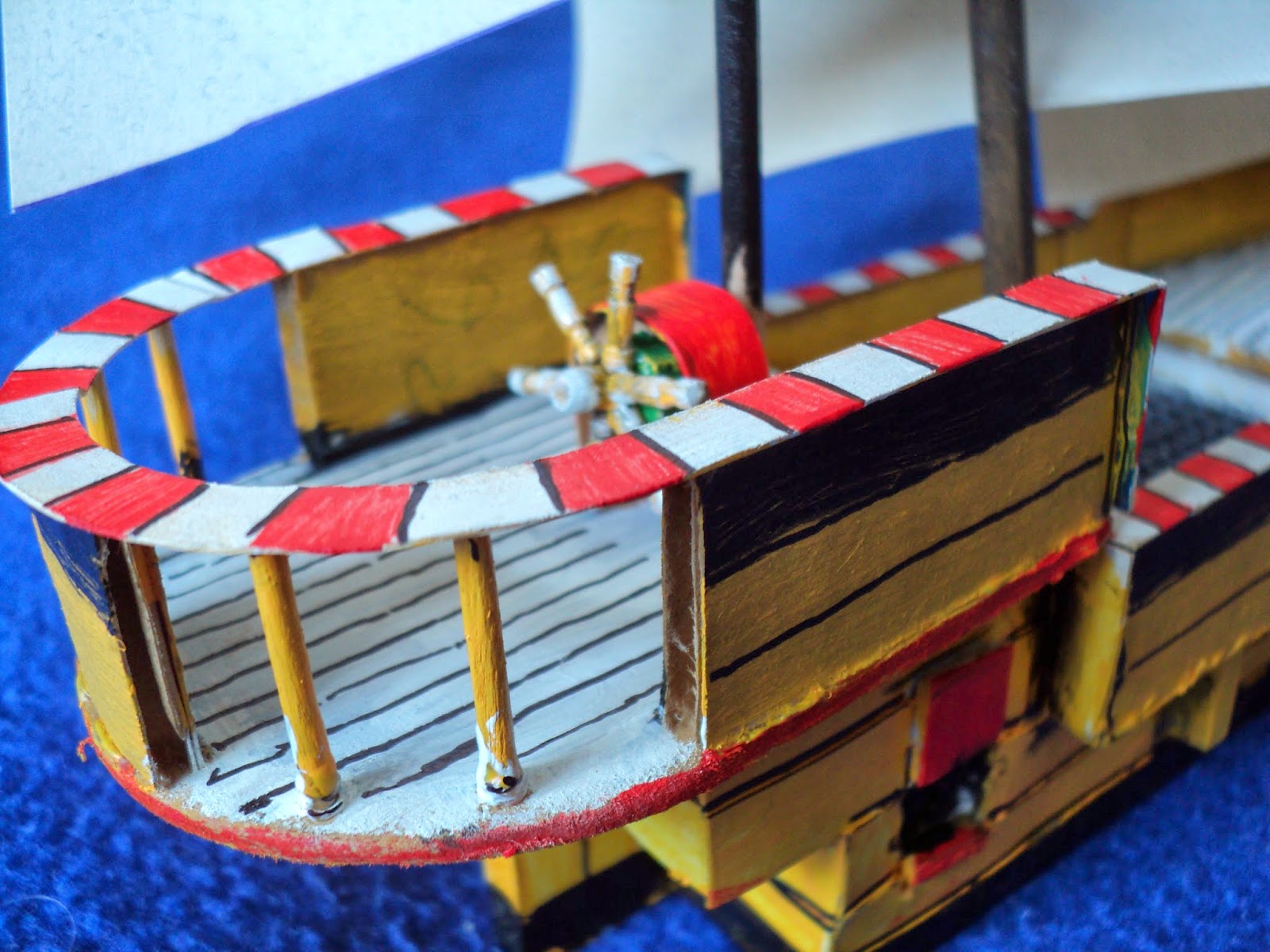 I was originally intending to paint the hulls an overall brown, picked out with some brighter decoration. Having looked at several pictures of ships, though, the basic dark yellow, with black and red trim seemed reasonably appropriate if only to suggest owners who have become fairly wealthy through maritime commercial interests, and are not too proud to advertise the fact.  Still, some touching up work won't go amiss! 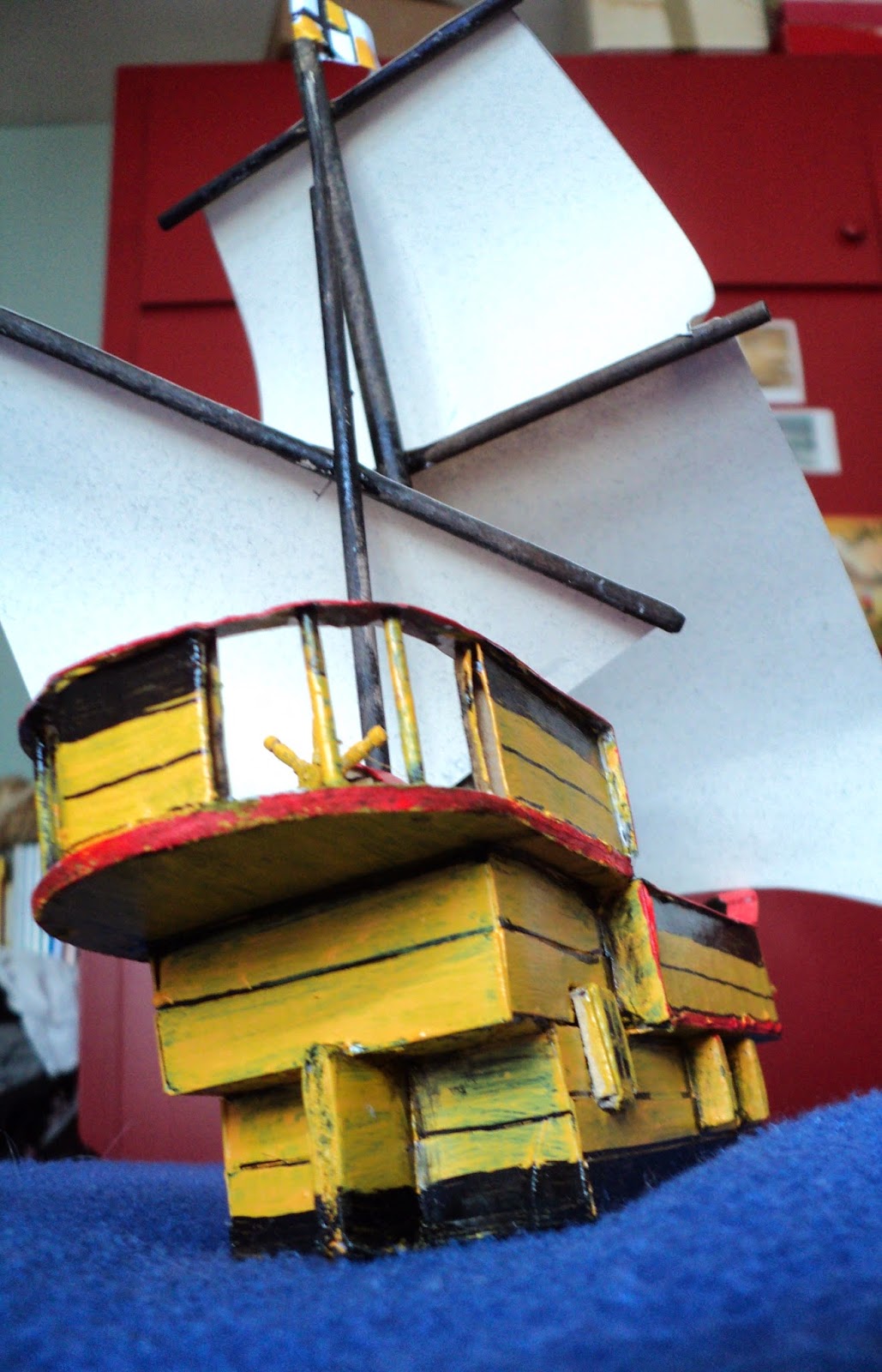 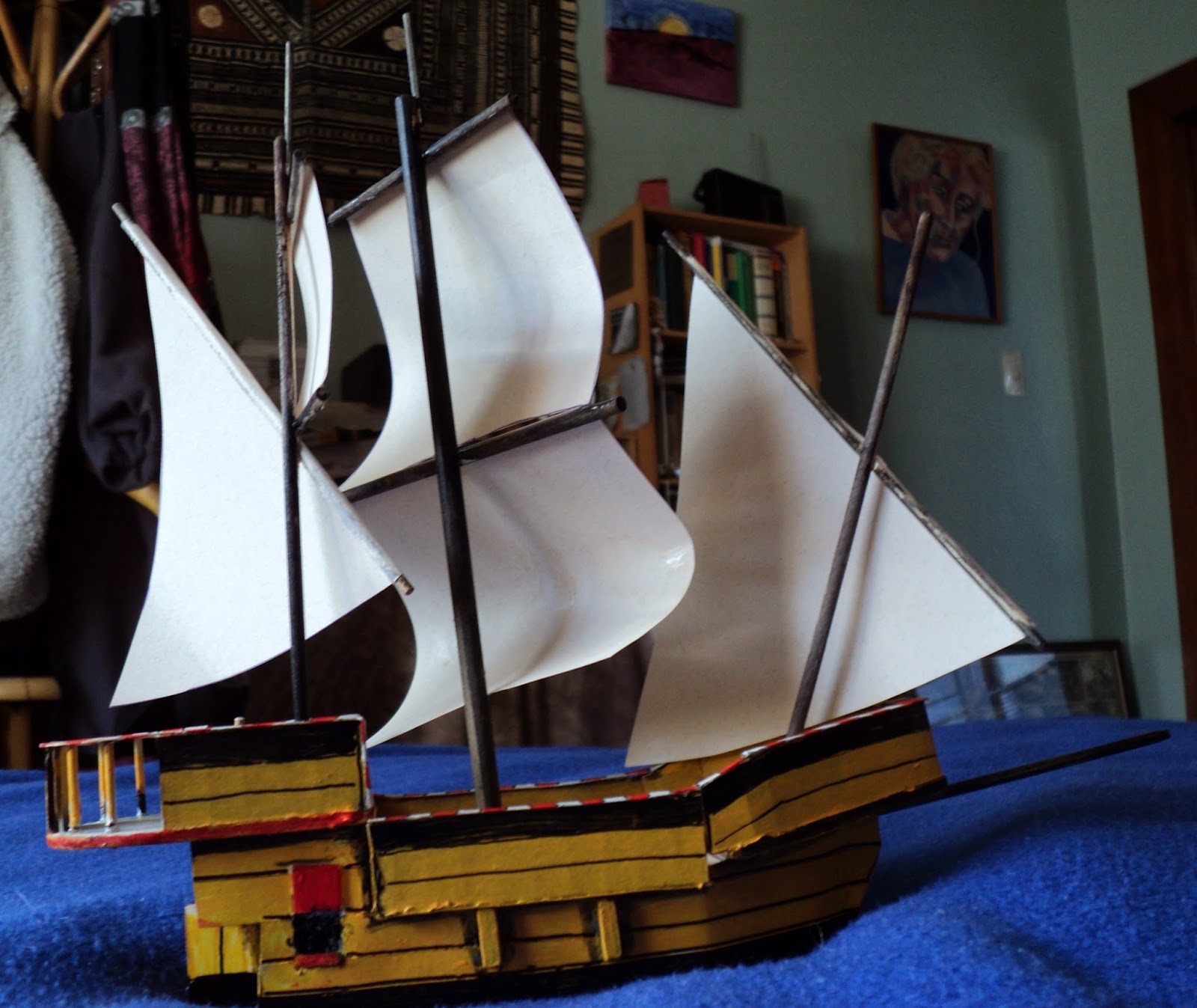 The pennant on the caravel is there simply because I needed to use up some yellow paint.  It is detachable, simply looped over the masthead flagstaff.  The flags and pennants can be replaced easily enough. 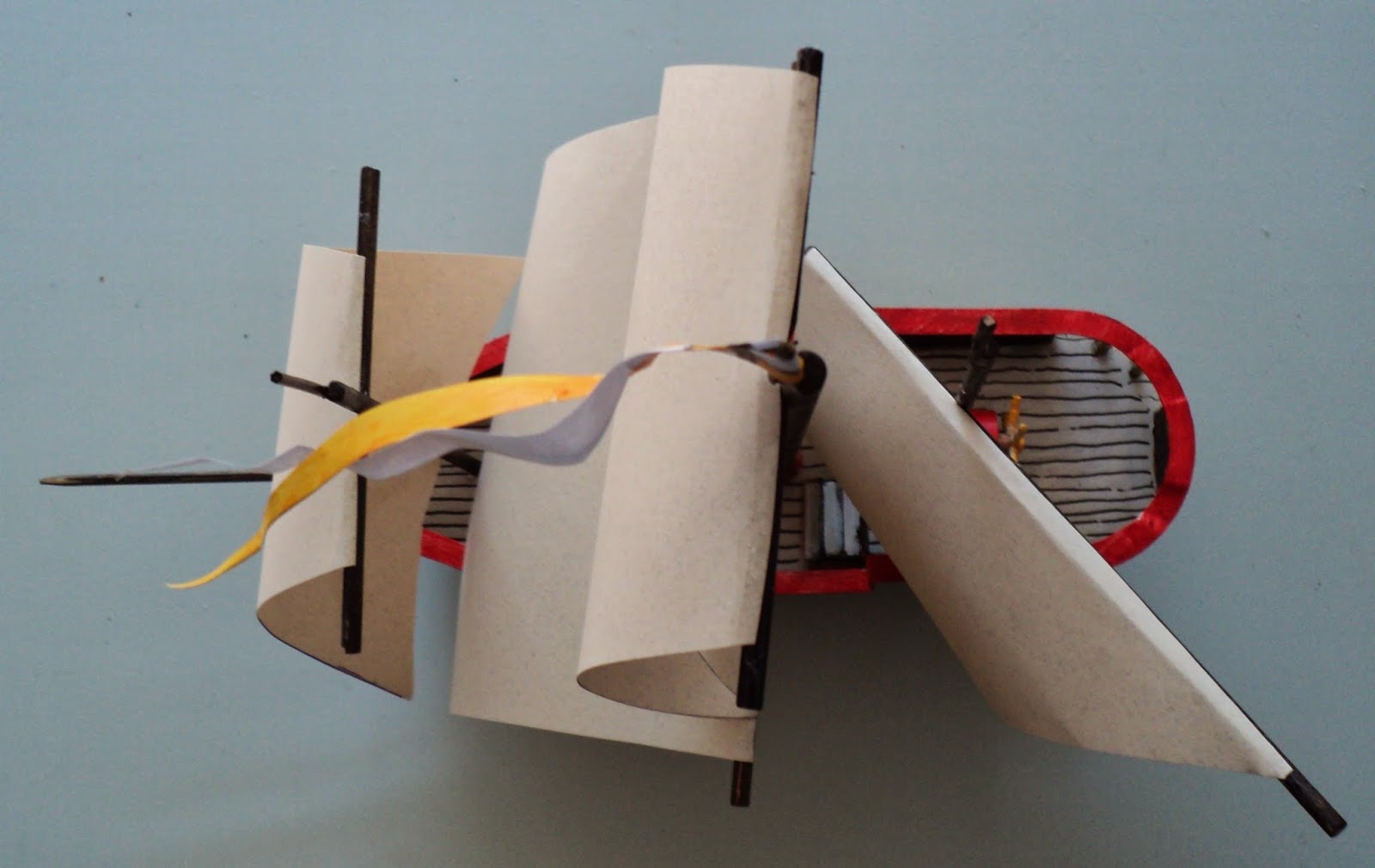 The masts themselves may be withdrawn to represent battle damage - though a canny pirate seeking to snap up a heavily laden prize might be loath to wound masts that would have to jury rigged to get the prize moving again.  Mind you, he's be less chuffed about wounding the hull!

Posted by Archduke Piccolo at 11:40 PM

Email ThisBlogThis!Share to TwitterShare to FacebookShare to Pinterest
Labels: Figures and models, Naval