Apart from the more or less complete units requiring a bit of repair work,  I have a more-or-less historical opponent that has at various times been used as  Georgians (Abasgians) or Bulgars.  It is probably fortunate that military fashions tended to blend and mix throughout a region.  The horsed figures bought as Bulgars were fairly ideal for Georgians, even though those peoples lived at the opposite ends of the Black Sea.
What follows is a series of pictures of works in progress in various states of completeness - or incompleteness.

The below picture depicts some shields with which I had been experimenting - this some 15 years ago, you understand.  The oval shield were moulded flat,  like the starred trio in the picture.  Using two pairs of pliers, I tried bending them in a horizontal plane to give them more of the rounded ;semi-cylindrical look, as descendants of the Roman skuta.
There were meant to be 12 of them, to be wielded by the front rank of the skutatoi in the following picture.  That the shield design dates from about 400 years before, I'll treat as 'artistic licence'.
In the following picture are;
1. 'Barbarian' bowmen.  These are various manufactures.  Some Tin Soldier Byzantine toxotai got in amongst them to eke out the numbers, as did some skutatoi to serve as standard bearers.  A very few figures of ancient manufacture against bulked out the whole thing to about a dozen elements.
2. Four surplus Varangian Guardsmen with axes, and shields slung over their backs.
3. Eight orphaned 'red' skutatoi who may simply remain as they are.
4. 'Red' light  bowmen (psiloi, toxotai).   I tended to use light - almost pastel - colours for regular light troops.


Rear view of the 'Axe-bearing' Guard, showing the slung shields.  One chappy has lost his...
A box more than half full of 'spare' horsemen: barded and unbarded lancers, and horse archers, with a few light horse as well.  Those pennon ornamented lances are those that have come adrift from other figures.  As there are quite a few more horse archer figures than lancers, they might be given a lance and become Georgian heavy horse.  The uniforms are quite near enough in design.


A closer look at the spare shields.  You can see how I've worked on several to round them.  Pity I didn't think of it back in the early 1980s.


The previous two articles gave no particularly clear view of the light horse.  I used to go for the maximum: 1 Trapezetoi element (LH(S)) 2 Prokoursatores (LH(O) - they are the ones in the second line - and 2 Hyperkerastai (LH(F)).  You'd imagine they would get overwhelmed by the light horse of other Asiatic armies, eh, but they performed well, on the whole.  In later versions of the army, they would be assisted by Pecheneg horse archers, though it was just as likely these 'barbarians' substituted for the hyperkarastai... 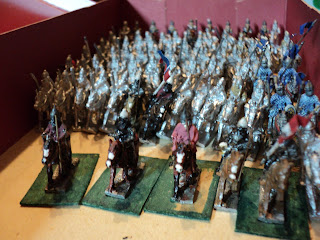 I also have several 'spare' skutatoi whose future remains undecided.  I am considering building out my foot units to four (not counting the Varangian Guard and the akritoi), each comprising 3 Spear and bow double elements (Bw(X)/Bw(O)), and one element of menavlatoi (Bd(X)).  Each should include two elements each of slingers (Ps(O)) and of javelinmen (Ps(S)).  That is quite feasible with my figure inventory!

Bulgarian light horse archers from Essex, I think.  I've had them near 20 years and still haven't painted them... 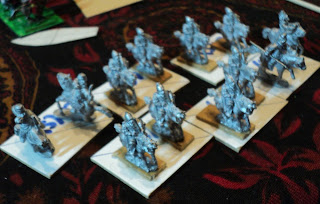 ... but they require something with a bit of heft as well: Cv(S) (Bulgar) or Kn(S) (Early Georgian).
Below, some Bulgar light horse archers that did actually get painted.
The next two pictures are of quite nice Byzantines of indeterminate origin that have eked out my Georgians over the years.  Quite what their future is, is uncertain.
Meanwhile, I am of course leaning towards something imaginary, but leaning close to history, at least from the point of view of geography and the political situation.  The central Empire is that of Ionium, sometimes called by their enemies the Empire of Rum, from its Latin origins.

The revolting Nikephoros Phobos has carved out an enclave of the Empire for himself - the so-called Empire of Pharbeyond - and at the head of which he has proclaimed himself Emperor, Caesar, and every other Imperial title he can think of.  Very conscious of his rights, the Porphyrogenitus, intends to deprive his rival of throne, lands and life - when he can find the time from battling Vulgarian and Abasgian barbarians...