I didn't bring, but I did buy... a little.  The more or less annual modelling/war games Bring and Buy was held at the Woolston Club this year, and, ever in search of a bargain in matters of interest, I hied me along to said event.  In the past it had been held in the depths of winter, the first weekend in July. The two-month difference was much appreciated; it was a pleasant half-hour walk to the venue.

Well, I say half an hour; more like three quarters, stopping off at a petrol station on the way to buy a bacon and egg pie and a sausage roll by way of brunch, and stopping off at Linwood Park (also on my way) to sit in the late morning sun and eat.  Most pleasant.  There's been a howling southerly blasting through here since that evening...

Arrived at the venue, I thought that, as I was on a very limited budget, I would do a circuit of the stalls before coming to a decision. Although I could have bought more, only two items really demanded that I part with cash.  First was the above lot of 12 French Horse Grenadiers.  As I had been wanting to get such a unit for my Imperial Guard anyhow, $25 seemed to me a goodish price for these colourful guys.  If I do put in an order for Minifigs later this year, it will now be for Garde Chasseurs a Cheval instead. Meantime, I was glad to return to this vendor the half-dozen British infantrymen that had snuck in to my inventory during the Waterloo event in June.

A certain amount of touching up will be needed, but nothing major - except for the horses.  I don't especially like grey war games horses, so although maybe three will be done as dappled greys, a couple more as blue roans, the rest will be bays, with maybe a couple of chestnuts.


For the rest, these palm trees insisted that they were a 'must-buy' for my WW2 Desert War, my involvement in Brian's 'Harad' Project, and, as it transpires, my Army Men project.  Four bucks for eight trees seemed to me a bargain.  I could have bought more, but I'm not building a forest!  In the following pictures, the 45mm tall figure gives an idea of scale.  The PzIV is a toy from China at I estimate 1:64 scale. 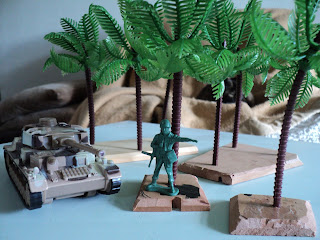 As these palm trees came without bases I had to find something upon which to mount them. Most fortunately I had some off cut bits of wood that had been kicking around against just such an eventuality.  I've bevelled the edges very roughly with a craft knife thing, but further work will need to be done with file or rasp.  A coating of sand will finish them off.  I was told that the trees could be painted with acrylics, after a good soapy wash, but I'm not sure I'll trouble. Possibly a dry brush of the trunks and the trees an overall ink wash will suffice.  If I do anything at all. Twenty-nine dollars, plus two to get in the door - that was well under half what I had budgeted for, and I came away well satisfied.

What to do with these?

These picture have nothing at all to do with the Bring and Buy sale, but rather with my sorting out my American Civil War armies.  Long, long ago, to augment my Union Army, I bought several boxes of Airfix French Foreign Legion figures.  From these I formed four regiments, of which three are depicted in the above picture.  Two comprise 27 figures (HQ of 3 plus 24 'other ranks') and the other 21.
As you can see, I never quite finished painting them.  Partly I think this was due to my not being able to make up my mind about them.  It was the havelocks, really.  Unpopular with the soldiers, they disappeared rapidly, so they are kind of unhistorical.  I was not keen to carve them away though.  In any case, painted white, they look quite elegant.  These are nice units
. 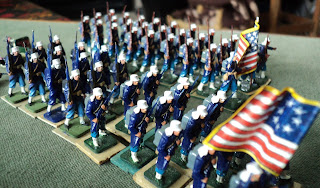 I was going to make them into a Coloured Brigade, and you might have noticed the deeper tan of the fully marching unit (except for the paler C.O.).  Interestingly enough from the photographs, the darker complexions do not much alter the generally Caucasoid appearance of these guys. But really, I still haven't been able to get past the havelocks.  Of course, the rifles look wrong, as well.  So I'm thinking they are likely to be recruited holus bolus into the Army of Azuria, or possibly of the Door - a vaguely Turkish opponent for Azuria and Ruberia... Unsure yet.  Any suggestions? 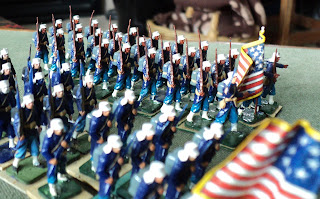 What of the fourth regiment. then?  Here it is:

These are Union Zouves, Airfix Foreign Legion figures with plasticine turbans added. Understrength at 21 figures, this is, of course, a veteran/crack unit.  It will remain part of my Union Army, and was anyway part of a different brigade from the three other FL-figure units. Unfortunately two of the figures have snapped off at the ankles, and I don't know why or how. The flags will have to be removed from the other three, and that will have to be done carefully, I suspect.  They have been hand drawn on paper and coloured with the type of pens used to make overhead transparency pictures.  The distinctly 'lozenge' shape is not accidental - I find that paper flags 'drape' better if you begin with that shape. 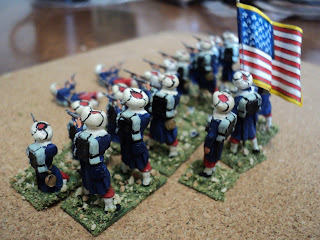 Posted by Archduke Piccolo at 5:18 PM

Email ThisBlogThis!Share to TwitterShare to FacebookShare to Pinterest
Labels: ACW, Figures and models, The War Between the States