Lately I have been trying out Paul Liddle's simple rules for Ancient/Mediaeval battles.  Not having seen action for a long, long time, my Byzantines and Bulgars were keen to 'have at it'.  I thought I'd make it a fairly sizeable action.  In the photos to come you will observe that some of my Bulgars are lacking in 'finish'.  My apologies for that.
The armies were;

The observant reader will see that most of the units on both sides are armed with bows.  The only other missiles are the slings and javelins of the respective light infantry.  The Byzantines had two and the Bulgars four units not so armed, all of them foot.

Without going into a lengthy narrative, the action went like this. The Bulgars seized the early initiative (i.e. won the die roll to see who moved first), and scored some damaging hits on the Byzantine horse on the left flank, including on the cataphracts.

As the picture below indicates, the Bulgar advance was somewhat impetuous, but I was figuring to get in a few blows with the faster moving archers, so that the spears could eventually close against some damaged opposition.
The village of Marsople anchored the Byzantine right flank.  The slingers advanced through it, whilst a medium cavalry unit passed by on the north side (i.e. to the left of it from the Bulgar (camera) point of view).

The pictures below show that as the horse closed on the southern flank, the Byzantines had already taken some damage.  The Emperor probably should have stayed with the cataphracts, for they succumbed fairly soon.  Neither side seems able to rally their wavering units (I think the Bulgars had one and the Byzantines no successful rallying rolls all day).  Worse for the Byzantines was that their flanking Prokoursatores were being enveloped by the enemy light horse.
On the other hand, in the centre, although the plan was for the Bulgar bowmen to inflict some damage before the 'push of pike', they were getting decidedly the worst of it.
As the battle seemed to be shaping, so it continued.  Once the cataphracts disappeared, the Byzantine left flank horse gradually crumbled away, and only the intervention of the Varangian spearmen from the reserve line kept up a semblance of a line in that sector.  In the centre, though, it was the Byzantines who gained the upper hand, and in favour of whom the balance tilted more and more until the Bulgarian foot collapsed 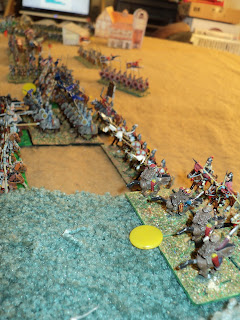 So close was the fighting overall, that the issue remained in doubt until the very end, when the destruction of two units in one turn decided the battle in Byzantine favour: 8 Bulgar units destroyed for 5 Byzantine.


One of the things I had to get used to was the 'conkers' IGoUGo system.  I have run across it before in some of the Games Workshop's games (specifically, Space Crusade) .  Such a system takes a little getting used to, especially in the type of open ended war games such as this.

The system favours aggression, that's for sure: get stuck in, and get in your first licks.  That's the caper.
Let me illustrate by oversimplifying a bit.  Forget about the 'wavering' rule for a minute, and imagine that a hit immediately eliminated the enemy.  Imagine, too, two equally matched units, RED and BLUE, facing off.


For no better reason than I mentioned it first, RED moves into close combat and strikes the first blow.
It has to roll 9 with 2D6 - a 28% chance of immediate victory.  But if it misses, then BLUE will get to strike in his turn, with the same probability.  So it will continue until one or the other is eliminated, or something terminates the action.


Now, let us go back to the beginning: who has the advantage?  Obviously it is RED, who gets the first strike, and if necessary, the third, fifth and so on.  Blue gets the right of reply only if he survives each time.

Given a fight to the finish, the probability that RED will win works out at a whisker over 58% (odds of 29:21 in RED's favour).  That is a significant margin.  This imbalance does not necessarily invalidate the combat system.  Rather it encourages aggression for one thing, places a premium on missilery for another, and, I suspect, might also place a premium on tactical manoeuvre. That last will have to be tried.

A couple of points might be worth looking into.

There are no rules that might allow a faster moving opponent to break off a close action. Whether this is desirable I'm not sure, but during the course if this, and a subsequent, battle, it occurred to me that lighter troops that get themselves into trouble might want to try a break clear.  The jury is still out on this one.

This goes to evades and, if it is deemed a good idea, breaking off moves.  Now, units are permitted a 'free' turning/pivot/swivel move at the end of their standard move.  Evading units probably ought to be allowed this turn at the beginning of their move, ending their evasive move facing away from the danger being evaded.  In fact, light troops should probably be allowed to make this pivot at any time during their move.  The impact on the mobility of light troops would make them formidable opponents.

I am wondering what their facing should be at the end of the evade move: towards the enemy, or in the direction of movement.  I assumed the latter, which went rather badly for a couple of Bulgar light horse units in a second battle (of which, more in another posting).  One evaded at a crawl, and the Byzantines had enough movement remaining promptly to catch them, hack their rear, and ride them down.  The other ended up being chivvied and chased to the table edge, and was also eventually caught and eliminated.

During this action, I allowed bow armed units to close to hand to hand without really considering the desirability to do so. Byzantine skutatoi don't really need to close: their best tactic is to stand off and let the non-bow-armed enemy come to them.

Where it got tricky was with bow armed horse on both sides.  I could equally well have had one or both sides stand off and shoot it out. The question is whether there ought to be some differential in the effect of shooting and melee. One possibility that crosses my mind is that instead of destroying a 'wavering' mounted unit, a second 'waver' result from shooting causes it to flee, if it can.  This 'fleeing move' might be adjudicated in the same way as an evade move.

One thing I didn't really pick up on was just how flexible, or proscribed, the system of movement is supposed to be. I tended to allow wheels and whatnot, simply measuring the outside of the wheel.  It did occur to me that the author intended that all movement be in the direction faced, with a pivot at the end, if desired. Your comments, Paul?

In a few instances, melees developed into a kind of 'staircase' arrangement when successive flank attacks and counter-attacks failed to achieve a decisive result.  I assumed that in such circumstances, a unit, in its own turn, could - possibly should - abandon its flank attack, and face the enemy to its own flank.  If so, ought this move be optional or mandatory?
I also assumed that in the even of a frontal attack combined with a flank attack, both attacks were adjudicated separately, which seemed to me reasonable. Two bites of the cherry.  The chances of scoring at least one 'waver' result in such circumstances is about 70%, and there is about a 16% chance of wiping out the target unit in one go.  Oddly enough, both sides proved on the day to be a lot more resilient than these probabilities would indicate.

That was my first play test, and it has to be said, the thing went with a swing.
Posted by Archduke Piccolo at 11:51 PM