Something more on villages and towns 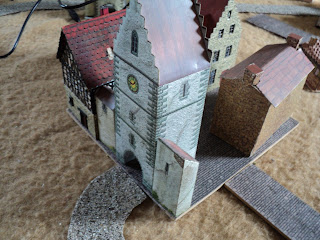 After my previous posting I thought I should dilate upon how I use the 'profiles' or 'footprints'  to depict towns and villages.  I don't use fixed stands as such, much preferring the flexibility of free standing buildings, houses, churches and other urban edifices.  But a fixed, well defined, area upon which to stand them has considerable advantages. 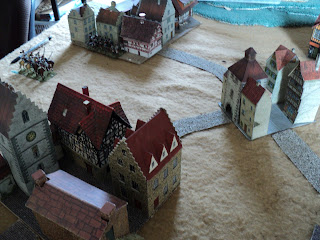 As the profiles aren't always conveniently sized to accommodate buildings and the spaces between (streets, alleyways, village greens and back yards), I place the priority on the buildings, and leave just enough space, no more, to suggest a main thoroughfare, maybe some side alleys and what not.  Gate houses or gate towers are great in this context, because they take up building space, whilst at the same time indicating and alternative ingress/egress from the town. 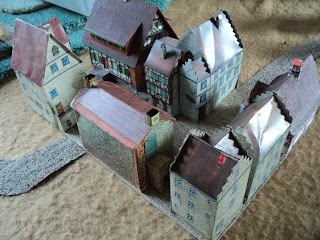 Take the fairly sizable settlement to the right. Let's call it Dampotz. The buildings are closely arranged on a 30cm x 20 cm space.  Under my Big Battles scheme this would represent a town roughly 1100 metres long by 720 wide. There is enough space between buildings to show the main street running down from the northwest, and, after a right angled turn left, exiting the town towards the northeast.  A side street leads to a road heading initially in a southwest direction.

The question is, how do we accommodate a garrison? 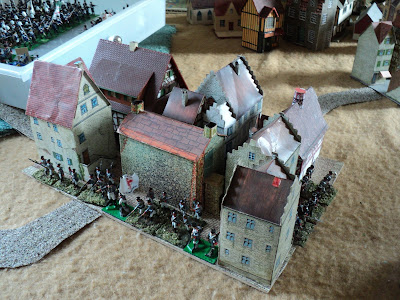 The photo to the left is the same town of Dampotz, with its garrison of 32 Prussian figures.  The buildings have been pushed in from the edge just enough to accommodate the figures (that the Prussians are on 2x2 stands is a bit of an inconvenience, but not a serious one).

To determine the size of the garrison, my convention here is the same as that I use for individual buildings.  The maximum garrison is the number of individual figures that can be lined up in a single rank along two contiguous sides, without overlapping.  Or, if it is easier (e.g. on account of its irregular shape, say) the number of figures that could be lined up within half the town's perimeter.

As my individual figure bases are in this case 1.5cm (15mm), exactly 20 can be lined up along the long side (20x1.5cm=30cm); and 13 is the maximum along the  short side (13x1.5cm=19.5cm). Total: 33.  So the 32-figure garrison in this case is one short of the maximum allowable.  The maximum number of defenders than can fight on one face of the town is again the number that can be lined up, as before, along that face.  Here, the maximum 20 figures stand ready to face an attack from the south west, the remaining 12 await an assault from the south east.   If attacked from one direction only, the remaining garrison can be used to replace losses among the defenders facing attack. 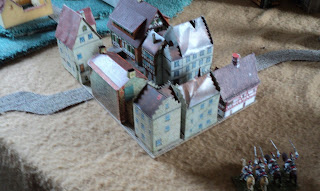 A town this size with a full garrison you can imagine is unlikely to be carried in the first rush by an assaulting column.  Now we run into a consideration that one doesn't so much with individual buildings. Suppose that the attackers did succeed in driving back the defenders along, let's say the south east face (in the above picture under observation by a force of Cuirassiers).  The defenders will be forced back 15cm, say, measured from the rear the stands.  In making this measure, the rear half of a 2x2 stand would have to be ignored.  The assault column would follow up, no doubt.  But now the whole garrison may join in the defence.  The idea is that the unknowable twists and turns, peculiarities and accidents of the town's growth would augment the garrison's ability to bring all its strength to bear.

If this seems unrealistic (it would certainly be bloody), an alternative approach suggests itself: the attackers can follow up with no more than the maximum number allowable to the defence in the direction of the attack.  In this instance, both sides will be able to draw upon immediately available reserves to replace further losses, the defenders from the rest of the garrison; the attackers from the assault column remaining outside.  I'll have to play test both options at some time or other. 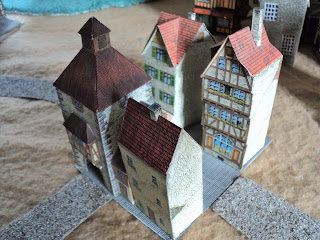 The small village (Zosspanz) to the right measures 13cmx10.5cm.  Its maximum garrison is therefore  15 figures (8figures+7figures). Below it is seen with its garrison ready and waiting. The buildings are kept in more or less their relative positions and orientation, just moved enough accommodate the garrison stands. This method is fairly convenient as regards garrisons, whilst preserving a certain aesthetic verisimilitude.  I think. 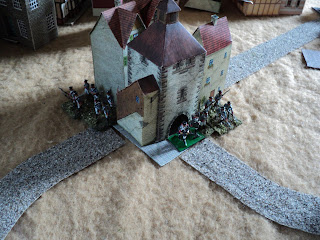 As the 2x2-stands take up more room in depth than is desirable (and I haven't made up my mind to cut them into 2 1x2-stands), a certain amount of overlapping beyond the village precincts is acceptable.

Owing to the small size of this place, a determined and successful assault might well evict the garrison in the first rush - a 15cm push-back carrying the defenders beyond the  built up area behind them.  As before, the complicating matter of the 2x2 stands (man I regret that decision!) forces one to ignore the instances in which just the rear half of such stands are forced back from the town.

Posted by Archduke Piccolo at 11:43 PM