Discussing grid systems just lately, Mr Cordery has been puzzling over why a field of offset squares 'did not feel right' as a compromise between a field if hexagons (hexes) and a field of squares. Here's link to the article on Wargames Miscellany.

This led to my exercising my own mind about this. I recalled that, way back in 1991, in preparation for a 'Bathtub' 1941 campaign based on Operation 'Crusader', I wanted to make a campaign map. A field of hexes being 'too hard' to make (a chore I had tried once before) I came up with the 'offset square' idea. The project never did get off the ground, though I had made the map and drawn up the ORBAT lists. The thing has lain more than half forgotten somewhere among all my war games jottings ever since.
But one thing I had forgotten and recalled to mind just this morning. I did not 'invent' the field of squares.  Mine was a field of rectangles, with an 'aspect ratio' of about 10:8.66 (or, if you prefer, 11.55:10, or 30:26). There was a reason for this.  I wanted this field to approximate as closely as possible a hex field, such that the physical (as distinct from the notional) distance between the centres of the cells were the same along the 'horizontal line' as along the angled 'lines'.
I have a feeling that the slight distortion of distances in a field of squares might be the source of Bob's unease. Maybe.
All through last week I was also off and on thinking that the field of offset squares could be transformed into a field of hexes. Well, actually, no. But is took a while for me to figure this out, and the why. It was not until I recalled to mind my oblongs that I worked out how it could be dome. I wish I had figured this out 30 years ago. No doubt there will be readers who know this method of creating hex fields... 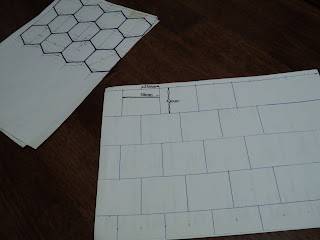 1.  Draw up your field of oblong cells. For the purposes of this article I have made them 50mm by 43mm. 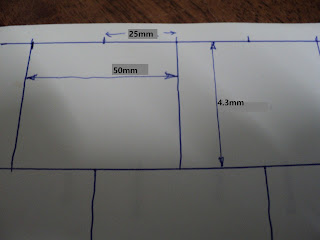 If you are making 100mm wide cells, then the other dimension should also be 'doubled' to 87mm.

I have done this solely with a ball pen and an ancient, badly battered, wooden foot rule. No other tools are required. I also allowed an 7mm margin at the top of the page. The reason for this will be apparent in the next paragraph.
2.  Draw in additional horizontal lines above and below those already laid down at a distance of 7mm either side.  The side of a hexagon that is 50mm between the faces is 29mm to the nearest mm. Subtracting 7mm from the top and from the bottom of 43mm gives us our 29mm hex-side.
3.  Now you can start drawing in the hexagons as shown in the diagrams below. You will see here that I added in at this point some additional markings. This was simply to confuse myself: they were entirely redundant, unnecessary and a waste of time. Through this cause I managed to get mixed up a couple of times... 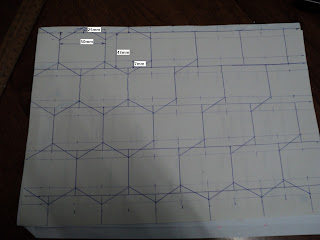 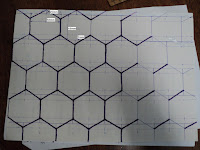 4, Having drawn up the hexagons, they can then be inked in. Being lazy, I inked then in freehand, following the lines. Normally, one would have drawn the oblong field and additional lines in pencil that could be erased. But you can see from these pictures there is scarcely any distortion, even on this pretty roughly drawn field. 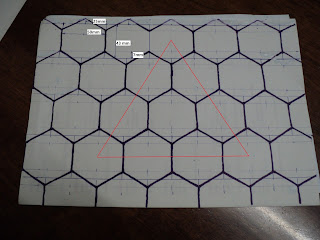 I took the last two pictures to show how little distortion there is, even viewing the 'angled' lines of hexes.  Something over thirty years ago, for a naval war games project ,I build up a hex field using triangles.  What a chore that was!  I filled two sheets with hexes (you will see them here), and then tossed in the sponge.  A few weeks ago, inspired by the idea of Portable Wargames naval, I finished of 5 further sheets using the 'pin' method of reproducing the hex field. 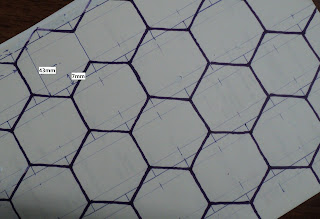 But I wish 30 years ago I had figured out the method I have described here! 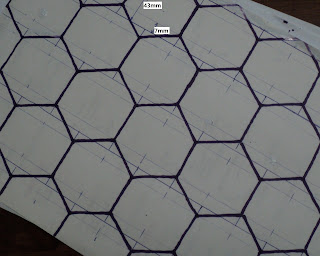 I'm sorry the ACW 'Stonewall in the Valley' Campaign has stalled.  Too many distractions.  It has not been forgotten, and will resume soon.

Posted by Archduke Piccolo at 6:09 PM