Still waiting for my copy of Portable Wargames to turn up - problem with the delivery company, apparently - I thought I'd try out a gridded game adapting the simple One-Hour Wargames WW2 rule set.  Opening the book more or less at random yielded this: Scenario 9: Double Delaying Action.


The table set out yielded an interesting enough terrain.  The yellow hedgehoggy thing in the picture was by way of a weight to keep the polystyrene hill in place.  New Zealand is a damned windy country, let me tell you, especially in summer. The air is rarely still. Fortunately for me the wind today was a mere zephyr,  For the firefighters battling the bushfires south of where I live - the enormous smoke clouds dominating the southern sky wafting off to the east - conditions would have been very unpleasant, with a scorching nor'wester forecast for later in the day.  The power outages later in the day were due to these fires.  They have been going for a couple of days, now. But... to proceed.

Here are the troops from which the forces were to be selected:


This scenario postulated that five miles north of this area, a decisive battle is being fought.  Both commanders here have been ordered to reinforce the main battle, whilst at the same time delay if they can not prevent the enemy reinforcement.  RED (Russia, defending) must break off at least 3 units by move 12 (one each fourth turn), provided that BLUE (German, attacking) fails to gain control of the town (for a future supply base) AND fails to exit at least two units from the north edge of the map.

I have an idea that the author, Neil Thomas, mentions somewhere what each unit represents, but I tend to think of them as companies - or company-sized - though they could conceivably represent battalions.   Each and all units have 15 strength points.  I used dice in holders to mark this, with the idea for the infantry units of removing a stand for each 5 strength points lost.  Then I promptly forgot I was going to do this because I was concentrating on remembering the current SP strengths of the vehicle and gun units.  I now think for those that once the first five SPs are lost, of placing two dice down showing 5 and 5 and reduce the SPs from them. 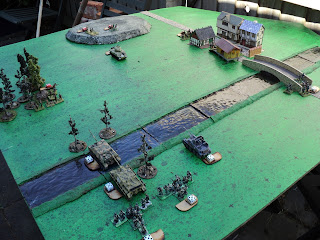 Each side comprised 6 selected from the 10 available units, selected by a die roll.  The Russians rolled a '1' which gave them:
- 3 infantry (Rifle) companies
- 2 mortar companies
- 1 tank company - Shermans
Of these, 1st Rifle Company deployed in the woods, 2nd Rifle Company formed a reserve in rear of the town, which was occupied by 3rd Rifle Company.  The tank company stood midway between wood and town, but somewhat drawn back close by the hill.  The powerful mortar support stood upon the hill itself. The whole formed a line with the flanks thrown a little forward to occupy the wood and town features.

The Germans rolled a '3' for force selection, which gave them:
- 3 infantry companies
- 2 tank companies (the Jagdpanzer IVs
- 1 Anti-tank company (the Marder)

The General Officer Commanding - General-major Klaus von Klutz - decided that the town was likely to prove too much of an obstacle, and massed the bulk of his force for a major drive over the ford and the Russian right flank.  Just a single infantry company (Nr 1 Coy) would make an attempt upon the town.

The Russian chose not to contest the ford crossings, preferring to wait for the Germans to advance onto their guns,  After briefly favouring the forest defenders with machine-gun attention (spiritedly returned with support from the mortars), the heavy assault guns swung off to the northeast to take on the Shermans. By this time the lead German armour had already taken serious losses. The company finally succumbed, having barely advanced beyond the riverbank. By this time, however, it was time for the Russians to draw off one of its units.  One of the mortar companies was the most conveniently placed; it retired without more ado.
Meanwhile the contest for the town drew quickly to a close.  After the initial exchanges of fire, the Russian commander, possibly unnecessarily, pressed 2nd Rifle company into the town alongside the 3rd.  The unequal firefight - two to one, with the Russians enjoying the cover of the buildings, could end but one way.  First Infantry Company was out of the battle.

That still meant that in the sector of their main effort, discounting the mortar supprt, the Germans outnumbered the defenders two to one.  By the time First Assault Gun Company was destroyed, it had inflicted considerable loss upon the Russian armour.  Second Assault Gun Company had already joined the quarrel, and barely two more turns had passed when it reduced last of the Russian tanks to a smoking wreck.
The 1st Rifle company was equally unable to hold off the German infantry attacks.  Second Infantry Company plunged into the woods on their flank, and levered the Russian back

Time was pressing for the Russians, who perforce drew off the remaining mortar company. Having won the battle for the town, Colonel Vladimir Vladimirovitch Vladimirski ordered 3 Company to counterattack to the west, whilst 2 Company took to the road north.  There was plenty of time to draw off the latter, but he would have been better to have kept 3 Company in the town.  It helps to remember what  the victory conditions what your orders are and what needs to be done to carry them out.


All the same, 2 Rifle Company saw off a tentative approach by the Marders, before turning off to retreat northward.  Badly depleted though it was, 3rd Rifle Company were gone by the 12th game turn, fulfilling half of the Russian victory conditions.  It was at this point that I called the game, for it was clear enough that the Germans would exit two units in that time.


The action went by very quickly, with no real hitches.  It is no disparagement to describe the Neil Thomas rule set as being of the 'One Brain Cell' type.  There are good reasons to adopt this approach. For one thing, simplicity makes the game accessible, and is less unrealistic in many of its effects than is too often alleged.

But as designed here, they are very easy to tailor - and I suspect have been designed with that possibility (inter alia) in mind.  It would not take much to build in rules differentiating among the disparate armour and armament of armoured and unarmoured fighting vehicles; of loading infantry on trucks or half-tracks, of bringing in reconnaissance elements etc, and still have a fairly simple game.  Less simple, sure, but by no means complicated.

Next time:  Stonewall in the Valley continues:
Posted by Archduke Piccolo at 2:22 AM