After considerable thought, I have come to the conclusion that trying to bring diagonals in to a square grid game system isn't worth the candle. But I do have some thoughts on the offset squares (rectangles) grid system.  Since when this notion first occurred to me, back in 1990, I always envisaged a field of offset rectangles as a simplified field of hexagons - hexes. For mine, that meant the cells were rectangular, rather than square - in fact it never crossed my mind to make them square - with an aspect ratio of 1.155/1 (or 1/0.866).

No one is going to be so exact, of course, but it seems to me that an aspect ratio of 7:6 (1.167/1)or 8:7 (1.143) would be a good approximation. Somewhat inconveniently, 1.155 lies half way between 1.167 and 1.143. In these diagrams the cells are 21mm across by 18mm high - a 7:6 aspect ratio. Incidentally, I would recommend anyone adopting this scheme to align the rectangles with the long sides parallel to the long sides of the playing surface.

The point of this article is how are the cells to be treated. In the Bob Cordery's Portable Wargame, the 'offset' square cells are treated as such: having four sides. I tend to treat them as having six sides still: Two 'vertical' long sides; four 'horizontal' short sides (opposite pairs or which happen to be co-linear!).

I wanted to see what the effect would be on a unit's facing, and given a limited, 60-degree, arc of fire. In the diagrams, I have used 'tank' symbols to indicate facing. But I ask you to imagine them to be assault guns, with a firing range of 4 cells, and its traverse limited to 30-degrees either side of dead ahead. The first diagram shows the cells in range, depending on the facing: 'up-right', 'up-left' and 'horizontal' (I wish I could think of better terms!). You will notice, of course, the apparent asymmetry of the firing 'arcs' in the first two cases.

But look at the arrowed lines. Passing through the centres of the cells along the extreme left and right of the 'arc' and straight ahead, they do indicate the practical symmetry of the '60-degree' arcs. I have placed the 30-degree angle of a set-square to demonstrate this (and to show that the 7:6 aspect ratio is quite accurate enough for our purposes).

To show further just how truly symmetrical those arcs of fire are in practical terms, I turned the piece of paper over. You can see how the ink soaked through to form a mirror image of the above. Then in pencil I roughly sketched in the hex-field.  You can see there that the firing arcs are indeed symmetrical. 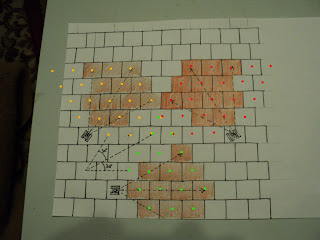 Reverting to the original. I added some dots to indicate a 120-degree arc. The symmetries are much easier to discern and to understand. Even so, I believe the 60-degree arcs would better represent the limits of firing units lacking the 360-traverse capacity of tanks, say.

Now we come to my version of the Portable Wargames 'Soviet Combined Arms Assault'. Well, the beginnings of it anyhow.  First off, I played it on my little 10x10-square table, set up on the kitchen table. The original hex-field map had to be adapted to my table, which tended to stretch it slightly in the up-down direction.  The extra square in width was occupied by a wide, fast-flowing river.

The Germans I set out as far as possible according to the original book scenario. As seen in the diagram. Oberst Frederickson parked his half-track within the works occupied by 1st MG Unit.  In this action, I tended to think of the units as companies, and so I'll describe them. That suggests that Col Strelnikov's force might have been the bulk of a Mechanised Brigade - most of the heavier support weapons having been left behind in the 'steady advance' of the previous days 'in the face of almost non-existent German resistance' (quotations from R. Cordery, The Portable Wargame, p80). In the above picture, the anti-tank obstacles stood in for minefields and were treated as such.

The were several changes I made to the scenario:
1.  Square grid instead of hex-grid:
2.  Strength Points instead of the 'Sudden Death' option.  I did, however, use the 'Going
Solo' card system of activating units.
3.  The infantry and machine gun units' strength points were indicated by the number of stands - 4 for the rifles, 2 for the MGs.
4.  I had the Russians advancing on a broad front...

Posted by Archduke Piccolo at 6:48 PM