Some of the recent response to my earlier comments and posting on this topic led me to look into the practicalities of:

1.  Units that occupy more than one grid cell
2.  How one might approach diagonal movement and placement.

This was very experimental - not a play test, withal, merely to inquire into the 'look of the thing.'  In the accompanying pictures, I was focusing more on the infantry than the horse.   Unfortunately the 6cm width elements are slightly too wide for the 5.7cm squares on the chessboard.

A Swedish (or Severeian when I'm feeling whimsical) regiment (battalion) of foot, comprising a pike block (8 figures) with 2 arqubusier/musketeer wing elements (6 figures each).  The unit occupies 3 spaces - grid cells.  In play, each element would have conferred upon them their own strength points.
Lined up orthogonally, the unit presents a nicely ordered, solid line, but suppose they found their enemy somewhere off to their left flank front?  One possibility is to begin by throwing forward the right flank to form left echelon as in the above picture.  In my view this would work quite well in the kind of 'orthogonal-only' systems we have been discussing, as the unit would be flexibly enough placed immediately to form the solid line East-West or North-South as required.
Suppose we allowed diagonal moves and shooting according to the system proposed in my previous posting (counting a diagonal step as one-and-a-half steps, and rounding the fractions down for completed moves).  With a two-square movement rate, it would be possible, provided the left-flank element pivoted in place, to wheel the whole  3-element line 45-degrees as in the diagram (except they ought in the picture to be lined up on the light-coloured squares).

Then of course you run into the elements splitting up to centre upon their grid cells  Is this good?  Do I like this? Not sure. This diagram has alerted me to another fishhook with this system. Suppose the Imperialist (Austereian)  Horse were to try charge the Severeian line. Does an element placed upon a diagonally adjacent square count as being in close combat? If so, you could bring seven (7!) elements into close combat with the diagonally oriented unit.  Against an orthogonally oriented unit, only five. In the pictured situation, the cavalry might try concentrating upon the right flank musket element, say. That does not sound at all like a Good Thing! 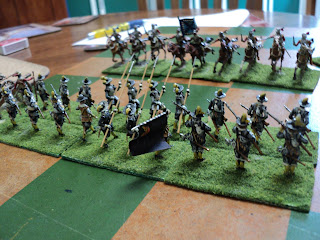 I perceive, then, that there is a whole lot more to this whole question than meets the eye. I'd probably be inclined to allow close combat between orthogonally adjacent grid-cells, and allow only shooting between diagonally adjacent cells. This would equalise to 8 the 'contactable' cells around the unit, though in one case there would be 3 frontal, 2 flank and 3 rear; the other 4 frontal and 4 rear.   It would also solve a little problem I noticed last time with javelins shooting diagonally. 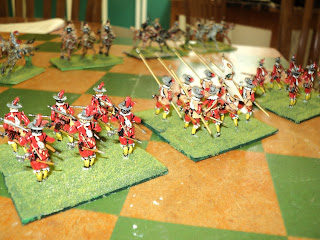 Food for thought, but I am beginning to think that maybe trying to sort out the diagonal moves, orientations and effects aren't worth the candle.  It seems more than likely that my 30YW armies are better suited to an ungridded battlefield after all.   If I wanted to persist with this, I would have to construct a grid field with 6cm squares.  Starting from scratch, 6cm hexes might be a better option. 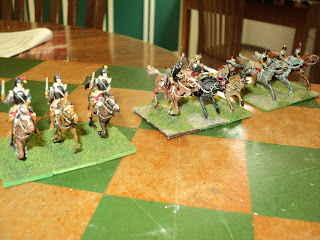 These last couple of pictures are a bit of self indulgence. I rather regret my neglect of these armies, especially as there isn't all that much to do (Swedish Horse and some artillery) to finish these off. But other projects are clamouring more for attention... 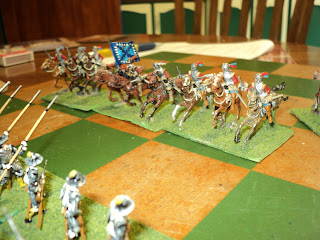 Posted by Archduke Piccolo at 7:08 PM