Although the hamlet of Bir Isen remained untaken, the place was left to the New Zealanders to deal with whilst the 4th Light Armoured Brigade group bypassed the place to press on towards their main objective, Sittangbad itself.  This was somewhat problematic for the Sherman squadron, which had to pass close under the walls of Bir Isen.  This they did, engaged the machine-gunner garrison at close quarters with HE and MG fire, then continued on past.  The PW rules permit breaking off from close assault provided that doesn't land the unit in question into another one.  This occasion seems to me a fine use of that feature.
Pinned down as they were, the machine gunners were in no position to discomfort B Squadron as they went by, and were soon under attack from the Kiwis' 'A' Coy. Badly depleted (1 SP remaining) as 'A' Coy was,  Colonel Corncobb felt it incumbent upon him to lend the weight of his presence to their assault.  On the other side of the road, 'C' Coy was still pinned down in front of the village.  On the southern flank, 'D' Coy and the Vickers gunners continued to be stymied by fire from the Reconnaissance Unit's armoured cars.
That, however, was about to change.

Before continuing,  I feel the need to comment on the 'pin' feature.  Now, at first I thought the 'pin' applied only to a unit that took damage, but a check rudely disabused me of that notion.  What it meant was that for a considerable time, a close assault was ongoing in the southern half of Bir Isen, with both sides (#1 Schutzen and 'C' Company) pinned down, unable to break off the action.  Pinned units can not move, even when hit with a 'Retreat 1 grid area'. whence they take a loss instead.  Nor may they spend a turn 'unpinning' whilst still closely engaged.

Frustrating as this was at the time, and I did spend some time after the action thinking about possible changes, I've just about come round to accepting that the thing works just fine as is. Sometimes it is a good idea to take your first thoughts under advisement, and check out what your second, or even third, thoughts tell you.   Possibly I found persuasive the suddenness with which the deadlock was resolved.

It was the squadron of Shermans that effected the resolution, though the Vickers gunners helped. Emerging from behind the north end of town the Sherman gunners could scarcely ignore the group of armoured cars facing southward.  Swift shots up their exhaust pipes, and accurate AP fire from Vickers machine guns swiftly put paid to the Recon Unit's gallant stand.   They didn't go down altogether fruitlessly.  They had held the Kiwi left flank in play for a long time, even without doing them much damage (1 SP from the MGs, and that only moments before their own demise).  The Vickers gunners themselves ran out of luck not long afterwards, the mortars in the town finding their range and wrecking the remains of the platoon.

With nothing to protect their right flank, the Bir Isen garrison found itself attacked from two sides.  'D' Company swarmed over the fences and walls of the village, rolled up the garrison's line in short order as far as the road, and attempted to cross it.  After a brief resistance, the German machine-gunners, too, joined their comrades 'in the bag.'  After such a prolonged 'sticky' action, in which the Bir Isen garrison by themselves accounted for at least 11 Allied SP, the collapse came remarkably quickly.
Free from the constraining influence of the enemy-occupied village, the Allied group surged onward. Second Schutzen Coy had briefly engaged the KRRC on the eastern fringes of the Palm grove, before fading back in a withdrawal that was to take them all the way to the entrenchments on the north side of Sittangbad itself. They easily outpaced the KRRC riflemen and 'A' Sqn's Honeys were too distant to catch them up.
Within an hour or so the pressure was coming down on the town's garrison, augmented as it was by the remains of Herzog's battlegroup. Some time before, the last of the Royal Dragoons' armoured cars had been knocked out. This permitted Second Schutzen Coy to scuttle into the works that had been home to the light infantry gun company, which had pulled pack into the north edge of the town itself. The anti-tank gun company was also freed to engage the approaching Crusaders and Shermans.

Considering their long, circuitous retreat from Bir Isen, and the adventures encountered therein, #2 Schutzen Coy had come though remarkably unscathed (all 4 SPs intact). Yet even within the relative safety of the Sittangbad field works, they found themselves all too soon under attack from the light tanks and rifles of 4th Light Armoured, whose pursuit had finally caught up with them. The reception they offered the light tanks, two thirds of their number already strewing the desert east of the palms, to draw back out of the range at least of the infantry's anti-tank weapons. The KRRC company were scarcely more eager to push the matter home. 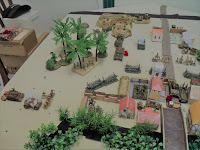 By this time, the last of the large convoy of transports laden with supplies, fuel and ammunition, had departed the town, across the bridge, and were well on the way westward. Oberstleutnant Herzog began to think about withdrawing elements of his garrison as well. The point was brought sharply to mind when some well directed mortar rounds suddenly descended into the fieldworks manned by #3 Schutzen Coy. Those gentry swiftly abandoned their earthworks, leaving a dangerous gap in the line.  Gunfire from the oncoming tanks also scored damaging hits on his Marder company close by his own position.  Once more the Oberstleutnant survived a near miss.

As the Allies drew up to the barbed wire, the Engineer troop had been moving through the palm trees with the view to clearing the obstacles northeast of the town.  A brisk fire was already being exchanged between tank and anti-tank.  The 25-pounder artillery added their bass accompaniment to the symphony of gunfire.  The hit upon the Marders, and a hit upon  #2 Schutzen - their first substantive loss of an eventful day for them - was enough to take the German losses past their Exhaustion Point (13/36 SP).  Not that the Germans were in any shape to launch a counter-attack. A sharp pep talk induced #3 Schutzen to reoccupy their field works, and the Kiwis weren't quite yet up to the wire, let alone in a position to contest the move.

The final decision was brought by the accurate return fire from the Marders and PaK guns. The Crusaders were stopped in their tracks, but it was the Shermans who took the beating. Within two turns the Marders had scrapped the lot.  They, and damage to KRRC, took the Allies also past their Exhaustion Point (20/54 SP), just one turn after the Germans (that the losses had reached 20 suggests I might have miscounted the turn before.  Not that it made any difference).

There ended the action.  The Allies had been too knocked about to attempt an assault with their remaining strength upon an objective well garrisoned and protected with field works and barbed wire. The German garrison was content  to wait out the day or in their own time to pull out under no greater pressure than a harassing fire from the Kiwi Field Regiment.  That would make a change from  the headlong retreat of the previous few days...


Still on WW2, 'Jacko' and I have begun working on a little project: Operation Uranus: the Attack upon 3rd Romanian Army.  'Jacko' has been building a Romanian Army - the Romanian Army, really, along the lines of Chris Kemp's upscaled version of Not Quite Mechanised.  We've put together ORBATs for 3rd Romanian Army (including Group Simons) and XLVIII Panzer Corps (less detachments), and for part of 1st Guards Army, 5th Tank and 21st Armies, and part of 65th Army for the Russians.   I've undertaken to write up a fairly formalised version of the Chris Kemp rule set for our purposes.  They'll probably be free form, though I may yet change my mind and adapt them to a grid format game.

Posted by Archduke Piccolo at 10:24 PM