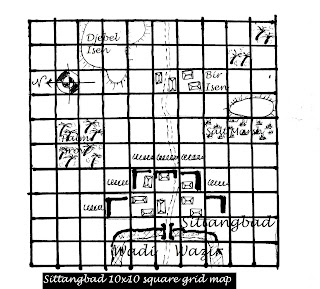 This square grid map has been adapted from the hex-grid map for the same scenario in Bob Cordery's Developing the Portable Wargame book.  This has included the field works and barbed wire as added there.  However, I have added in the small rise east of the salt marsh that existed in the original Young and Lawford book, Charge! 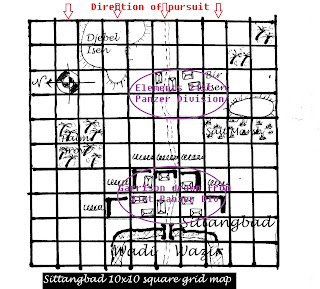 Leaving Hauptmann Johann von Herzog to supervise the withdrawal and rearguard, the Feldmarschall retired westwards along the via Balbia. The hauptmann was none too pleased with his assignment. His battlegroup, drawn from the exiguous remnants of 21st Panzer Division lay drying out after the overnight rainstorm about the hamlet of Bir Isen, a kilometre or so east of Sittangbad.  The town itself was garrisoned by a small group from the same Division, under the command of Captain Sapten.  Further to the east the leading elements of the pursuing force, from the recently constituted 2nd New Zealand Corps, lay not too far distant - possibly only three or four kilometres.


How Herzog would have preferred a hasty withdrawal out of Sittangbad, across the Wadi and to blow the bridge behind him.  A single hour's respite from pursuit would have been welcome.  But first had to be evacuated the tonnes of fuel, ammunition and equipment before any thought could be given to organising the retreat of his command.  Oberleutnant Fuchs, who had reported the situation to Herzog at his HQ in one of the less demolished hovels in Bir Isen, was rather glad to take the ride back into town whilst Herzog, in no serene state of mind, grimly issued his orders.

Allied forces begin off table and may enter only as allowed by the activation cards.
..

1. The German pionier company are held by the bridge where they will be assumed to be preparing charges.  They may,. however, be 'activated' for some other task.  To resume this primary task,  they have to return to the bridge, and be 'activated' to begin.

2.  The fuel and ammo supplies supposed to be evacuated will be loaded on trucks that will be lined up, in pairs, along the main road beginning with the exit square.  At the end of each German turn, 1 vehicle will be removed as having driven off.  Spending ONE 'activation point' will allow one further vehicle to be exited.  To simulate the column inching along a crowded highway, the vehicles will be removed from the rear.

3.  The Allies begin the action 'off table', and are brought on only as activated.

4.  The German rearguard begin the action in any of the eight squares indicated in the second map.

5.  The Sittangbad garrison begin the action in any of the 10 squares indicated in the map, with the pioneer company on the bridge square.

Posted by Archduke Piccolo at 4:55 PM