Whilst reading (once again) White Death (1) , and looking over Tom Gow's 'Motti' scenario (2), the thought occurred that the 'Ordeal of 9th Army' might be just the thing to try out some ideas I've had concerning operations level games on hex grids.  A glance at my postings over the last 12 months or so will fill in the picture. 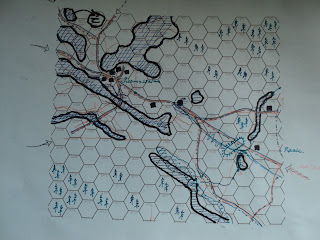 So far I have traced a map onto a hex-field cognate to my table top hex-grid.  This is very much a draft - you can already see corrections and redrawings,  The original was from the Robert Edwards book (whose narrative, by the way, I recommend highly), traced onto blank paper, then transferred to this diagram.  I was a bit  lucky, there, as the width of the two book maps were together almost exactly the width of this hex array.  You can almost see how the maps fitted together - square, but offset from top left to bottom right.  The blank areas will be filled - more or less - with forest. 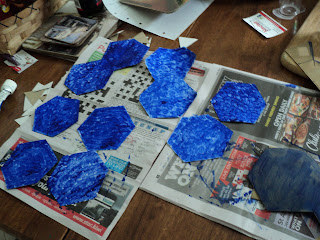 You can see from the map this will need a lot of lake.  I have some river sections that will do for the long, narrow lakes to the south and east of the map, but the others will be made up from these crude elements drying out in my kitchen.  They are made from thin card stock drabbled over with water colour.  As I don't anticipate using such devices often, I am in two minds about how much I want to pretty them up.

To be continued:  I was thinking of posting my projected OOBs here, but I'll think about them a bit more, before posting...