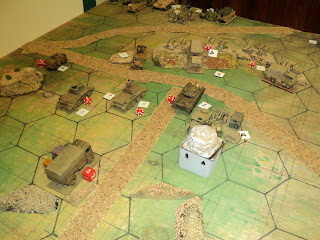 Having played out this scenario, I reverted to my original intention and played it as a Hexblitz game.  Having had a chance to rethink how I was going to do this, the thing actually played more quickly than the Portable Wargames Development (PWD) system did.  For anyone unfamiliar with these rule sets, they spring from the ideas of Bob Cordery whose own blog spot you'll find here. 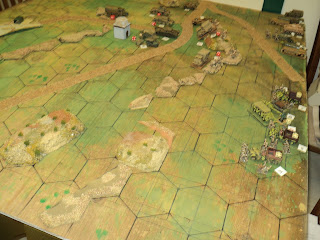 I won't go into a detailed account, however, mainly owing to my camera choosing mid-battle to run out of battery.  That in fact I did have a fresh set in plain sight (having failed to find them after an extensive search) I did not discover until the action was almost over. The action followed lines similar to that of the PWD game, except that this time, I started the 361st Afrika Regiment slightly further to the east.  The clash between 15th Panzer and 4th Armoured Brigade also took a different path from the first battle, neither approaching further west than Sciuearat or Zaafran. 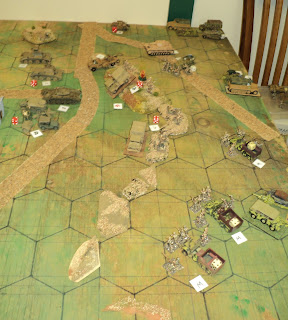 But the main point to note was that I used the Moving/Stationary/Defending system, and priority chits.  Instead of priority chits by unit, which was such a hassle in the Operation Uranus action, I tried them by formation instead.  That limited the priority stack to 1-7 - for four Eighth Army and three Afrika Korps formations.  The respective commands I left free.  Otherwise we would have been looking at 15 chits a side: 30 altogether.  The reduced number seemed to work very well. 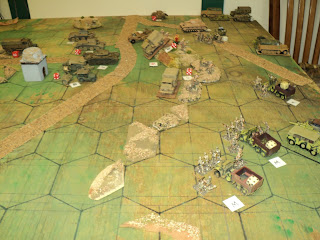 This version of the action seemed to be the more exciting somehow, although whether this had to do with the the game mechanics or the dice rolling, or simply the effect of chance, I couldn't say.  One thing was certain: it was easier for units to drop out of the action through losses - and several did. 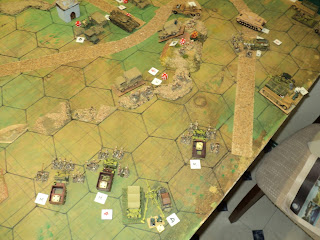 The first to do so was I Battalion 361st Afrika Regiment.  The picture below tells the story.  The 2/ Rifle Brigade and I/ 361 Rgt had both already taken one hit each.  In this particular turn, the Afrika Rgt (4 units) drew the '4' chit, the 7th Support Group the '6'.  I use these in numerical order. 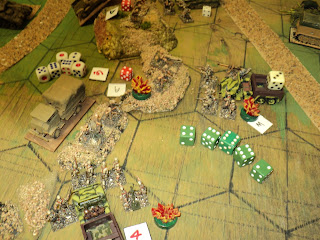 Combat resolution is 'competitive': both sides roll, initiated by the 'Moving' unit(s).  First went I/361, SP=3 plus 2SP from artillery support: 5 dice requiring 6s to hit.  Three hits! Wunderbar!  2RB reduced at once to 1SP only.  Return fire: SP=4 plus 2SP also for defensive artillery support, 4,5, and 6s to count: Three hits - about what you'd expect.  Of course, that wiped out the remaining SPs of I/ 361st, which accordingly fell back out of the action.  Naturally, it was not long before 2RB also fell back and retired from the battle. 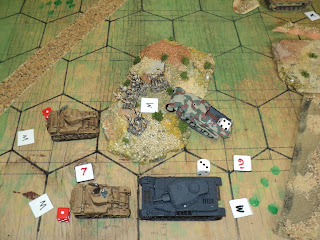 Meanwhile, the arriving 15th Panzer and 4th Armoured turned upon each other, mauling each other to a standstill in fairly quick order.  Although in the picture the Germans look to be getting the better of the battle, the Honeys were to prove hard to eliminate outright.  In effect the two formations cancelled each other out for the whole action. 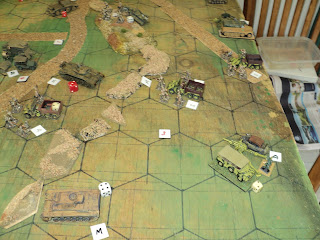 It was about this time the camera batteries gave out. By the time I could resume taking photos, the action was nearly over.  The Afrika Korps had cleared the escarpment either side of Belhamed and carried the feature itself.  But the Afrika Regiment had but one battalion still in action, and that much depleted.  Sidi Rezegh was still held in strength, and it was clear that 21st Pz was not going to force any time soon 22nd Armoured Bde away from Ed Duda.  On balance the end result was rather less conclusive than the PWD version. 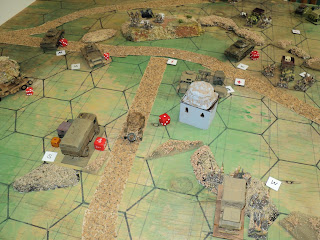 On the whole I liked the way this game played, but I probably ought more closely to have monitored the time scale.  The ground scale being roughly 8000:1, the time scale of roughly 90:1 is indicated.  That suggested for a winter's day in North Africa, maybe 6 x 90-minute turns.  The \overnight' turn could have restored to the surviving depleted units, say, half their lost SP values.  I didn't keep track of the moves, but I am pretty certain the action lasted well into the second day.
Posted by Archduke Piccolo at 3:22 PM