I admit to procrastinating on this post.  In the previous, I suggested slight amendments to The Portable Napoleonic Wargame to resolve what I considered to be a problem with the (close) combat mechanics.  The 'problem', as I saw it, was that in certain, not rare, situations, one side would be entire immune from harm.  Not even rolling a '1' would incur a hit.

Nor did I like the notion of arbitrarily deciding that rolling a natural '1' on a D6 would be a hit, regardless of modifier (that a '6' on a D6 might be insufficient to 'save' a unit from harm doesn't seem to come into consideration, the way the mechanics work).  Hence the methods I've suggested.  Before leaving this, it was remarked in response to my last posting that the effect of a supporting stand being a 'plus' for its own side and a 'minus' for the enemy was perhaps to skew the results too much in favour of which side had the edge.  That is a reasonable argument, but there are two reasons for my deciding to set it aside:


Now, we could leave the matter here, but it seemed to me a week ago that the game rather omitted the 'column vs line' theme that was such a feature of many of the battles, especially of the Revolutionary and Peninsular Wars.  Looking back to the Brigade and Divisional sets - yep: there they were.  Why not at Army Corps or Army level?
I admit it took longer than it ought to ask myself this.  It should to have occurred to me sooner.  In trying out a new rule set, it is usually a very good idea, when encountering something hard to understand or to accept, to ask: 'Why has the author done it this way?' Why has he omitted this; why has he included that; and why choose such-and-such a method?  I could of course ask Bob Cordery himself, but I think I pretty much had an answer already.  Column and line combat was to be subsumed by the scale.  The two, three or four elements to a grid area were pretty much cognate to 'stacking' the unit chits in board war games.

In the light of this, what have now to suggest is rather less compelling.  However, I have decided that for my own purposes, and given the grid size compared with my own elements (see the picture below), even at this scale, there remains scope for 'column' vs 'line' combat.  Hence my suggestion of +2 for friendly supporting flanking unit  in the same grid area; and -2 to a unit attacking an enemy unit  that has  a supporting flanking unit in the same grid area.  Recall from last time, that who has the more 'pluses' adds 1 to his die roll; who has the more 'minuses' takes 1 from his die roll.  The presence of generals, by the way, only adds to his own side, and has no effect - not even if he is Napoleon himself - upon the enemy. 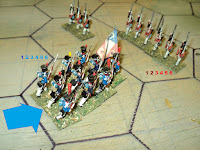 But even that doesn't seem to me to be quite enough.
Let's repeat the second diagram here:

French Roll: n + 4 (General + 3 supporting units) - 3 (enemy flanking supporting units 1 in same hex plus unengaged enemy contacted in adjacent hex)
British Roll: m + 2 (Flanking support in same hex) - 3 (enemy rear supports in same hex)
French have the extra 'plus', so can add 1 to the D6 roll.
Minuses are equal, and so neither side subtracts from the die roll.
The French will be hit if they roll '1'; the British will be hit on a roll of 1 or 2. 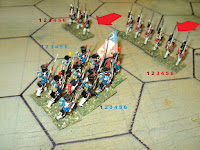 Now it is the British turn, and the whole Division counterattacks.  As they are already in contact, it is just a matter of their 'initiating' the combat this turn.  Now there are two combats.  Given that the advantage in both lie with the French, one feels that this is too much a losing proposition for the British.  Mind you, it is aruable that this is too piecemeal an approach.  The Redcoats would do better concentrated in the one grid area.

I'm very tempted to suggest that a line of two elements as depicted here, both elements initiate combats, still counting their fellow as a flanking supporting rank.   But it is still a losing proposition, even with a general present.

However, there is a solution.  If the third British brigade were in the same grid area as the main body, it would add a (rear) supporting element.  The presence of a general will then put 3 British Brigades, in line with integral rear support, on a par with the four French in Divisional column.

If were are to continue placing negatives for enemy in contact and pluses for for friends in flanking adjacent grid areas, - in effect an overlap - then we might have to look at something a little extra (in the negative direction) for being in contact with enemy on flank or rear. 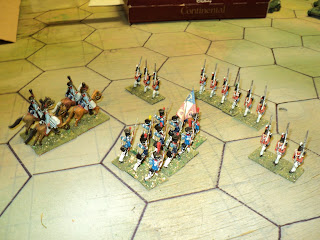 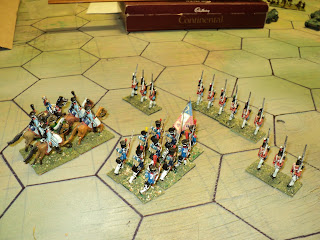 The British facing the French infantry can count one flanking support unit within the same grid area (+2), and one unengaged flank support from the adjacent grid area (+1) to their left.  As the right flank brigade is under attack by French horse, it can not help the rest of the division.  That brigade can count no pluses at all, and will have to subtract 1 from the die roll owing to the cavalry's rear support. 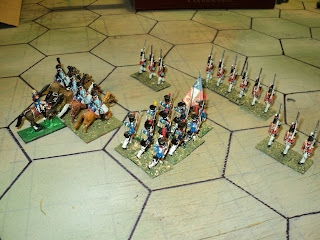 In the above diagram, the French cavalry are in line.  I am inclined, however to reserve the +2 for flank support in the same grid area to infantry, and possibly supporting cannon. 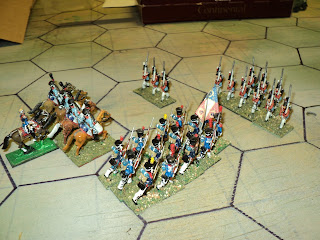 The above diagram presents a thicker line for the French to face, equalising the 'minuses'. French have 4 'pluses' to 3; and 3 'minuses' to 3. 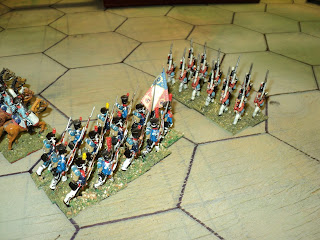 Here, the French have caught a Tartar: a powerful British Division of 4 brigades, in two successive lines.  Even with no general present on the British side, the prospects are in favour of the British: pluses even, and the French have to take the minus. 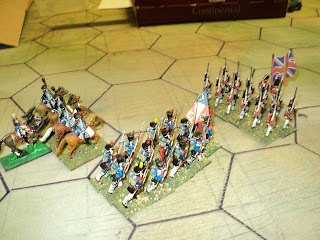 Even worse for the French, this strong enemy has a general present.  The Column will take a minus on its die roll; the British will take a plus.   But ... 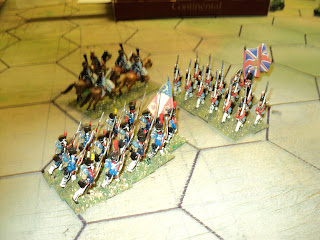 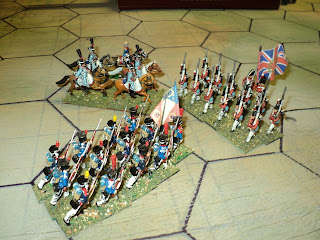 * Flank support from adjacent grid areas are cancelled if the 'supporting' unit is in close combat itself with another unit.  In the above diagram, if a second British unit or formation stood to the immediate right of the one shown, then it would be engaged by the French cavalry.  Neither would get the flank support.

After all this, I'm simply not sure I want to go down this track - at least not so far.  That won't stop me play testing the idea in the fairly near future!  What I will have to investigate is whether any added complication adds anything to the game system; and whether it adds or subtracts from the play and the satisfaction from it.

Posted by Archduke Piccolo at 7:16 PM