I don't do a lot of 'bringing' to this event, and I'm not a huge 'buyer' either. But last Saturday (31 August) this year picked up an interesting assortment of stuff, mostly 'on spec'. Above is my little haul for this year. A paper building, some WW2(?) trailers, a unit of Napoleonic Nassauers, another bunch of figures of which more anon, and 3 boxes of 1930s-40s US carrier aircraft.
That 'other bunch of figures' were these 5 x 7-figure units - metal figures, 20mm by the look, many with a decided 'Asian' look about them.  My immediate thought was that at last the Turcowaz army would get some figures of their own.  I admit, though, that it will be a bit of a wrench to break up such nicely presented units.  That each has 7 figures is a little bit awkward as well.  Something to think about anyhow.  In themselves, they were a good buy I thought (though I rarely buy anything just because 'it is a good buy').
Brief conversation with vendor:
I had just offered to buy this cheaply priced edifice.  As I handed over the assortment of coins by way of payment, he says:
'You recognised it didn't you?'
'No...' I began, but then, 'Well, yes, actually.  It's a building.'
Quickness of wit is not my long suit.
'Seminary building at Gettysburg.' he says.
'Why, so it is...!'
I actually bought it as a useful generic CBD building.  It will remain a useful generic CBD building.

The green and yellow guys were being sold as Nassauers, and so they shall remain, though most of them are Minifigs French line infantry figures. Minifigs do specifically Nassauer figures, but as they are very similar to the French, it makes (to my mind) little difference. They'll go to my 'Portable Waterloo' project...

Having bought the Gettysburg Seminary, I was about to move off, when I noticed these things. After considerable thought I reckoned they might go with my 'Mighty Armadas' project - overscale against the ships, of course, but maybe not impossibly so. I do have already some 16 aircraft from the Tamiya 1:700 scale USS Enterprise kit - 4 different types, of which I recognise only the Corsair. The SBC biplane was obsolete by 1941, and, as far as I can make out, never saw combat service with the US Navy, though did soldier on as a trainer. In my navies, they'll get to bomb stuff... 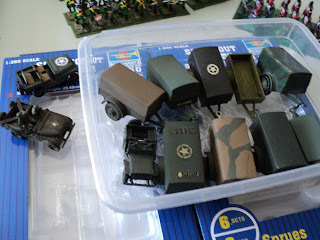 Overall I spent rather more than I usually do, but I had budgeted for twice as much as I actually spent. Actually, adding it up just now, I discover I spent about $20 less than for some reason I thought I had. I could have bought more, but tend to take a very restrained approach to these sorts of things...

Oh, yes: it being due on Saturday, I renewed my club membership!