The following action was fought using Kev Robertson's very simple rule set, slightly amended to 'fit' my gridded table.  In effect, 2 grid areas on my table represented 1 foot (30cm) in Kev's system.  I think I would prefer 3 hex grids (which would have the virtue of equality!) but it is not a huge table! There is one other amendment I made. Rather than 'all battleships are equal', I gave each vessel a strike value of 1 point per gun, modified by plus or minus 10% per inch greater or less than 15-inch. Vessels' protection or endurance (the latter word, having just occurred to me, might be the better choice), a value equal to the weight of the vessel as a multiple of 4000 tons, rounded.
The action opens at 11:00 hours, with the respective squadrons upon converging courses. In the following, I rather arbitrarily determined that each turn represented 10 minutes. Another point I should make right now, is that even with a maximum speed of 2 hexes the turn, one could very quickly run out of table. The beauty of the grid system, is that one may 'scroll' the table in any direction as ships approach the edges. I had to do this a couple of times in the course of the action, but it takes a minute or so, tops, so not so very inconvenient.
As the courses converged, the Kiivar flagshop, Argus Panoples exchanged salvos with the leading Ra'easharn vessel, the Kiivar flagship Akem Manah. The Ra'easharn vessel found the range the more quickly, registering at long range three hits to the Kiivar's one. This was far from a good augury for the action as a whole, and henceforth the impression remained that Ra'esharn gunnery perhaps had an edge on their opponents.
At this point Admiral Mojo made a radical tactical decision, ordering a turn to port onto a 90 degree bearing (i.e. due east), all ships turning independently to form a line abeam.  His justification was that he wanted quickly to shorten the range, and figured upon his forward batteries alone (six  18-inch guns) would be a match for the enemy's full 8 15-inch gun broadside (6 + 30% = 6 + 1.8 = 8 rounded - equal to the enemy). Unfortunately the execution of the manoeuvre left something to be desired, as the line was echelonned back to larboard in such a way that at the next exchange of salvos, IRS Agra Mainya was still out of range.


In response, Admiral ordered a 30-degree course change to starboard. In effect the Kiivar found themselves 'crossing the T', all four ships bringing their full broadsides to bear against the forward batteries of only two of the Ra'esharn ships.

The Kiivar quite failed to make the most of their opportunity (ain't that always the way?!). Concentrating their broadsides against Akem Manah,  Polyphemus and Argus Panoples registered just four hits between them.  Akem Manah was able to put three more into Argus Panoples, already taking in water and hurting badly.  The gunnery of the Hyperion and Tethys was even more woeful, the former failing to register a single hit (long range, looking for 6s with 8 dice), and the latter one only. At long range, Aeshma was able to give as good as received, as Hyperion took a hit.  (As an aside, with 16 guns firing at medium range and another 16 at long, I might have expected 8 hits, rather than the mere 5 actually registered.  Having said that, the 4 hits by the Ra'esharn ships was about what one might have expected.  So we were looking at woeful Kiivar gunnery here, not outstanding Ra'esharn.  But wait...!) 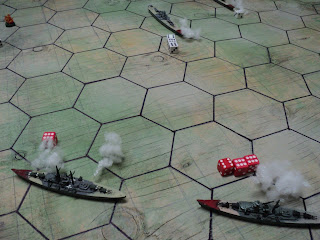 The next few pictures simply show how the dice rolls get transformed into shell splashed and explosions for a more picturesque image. 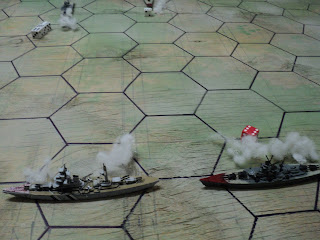 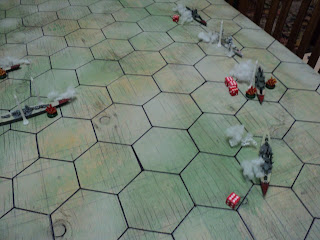 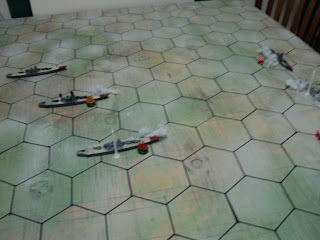 Seeing the unsatisfactory results of his manoeuvre, Admiral Mojo ordered a 60-degree turn to starboard, to bring his ships once more in line astern. This brought the head his line rather astern of the Kiivar, such that Polyphemus could bring only its stern battery to bear.  On the other hand, his squadron was definitely 'crossing the T' now, and took this time rather better advantage of it. Excellent shooting from Polyphemus, Argus Panoples and Hyperion put ten shells aboard Akem Manah, reduced now to a point not far from sinking.


For its part, Akem Manah had to split its fire between Argus Panoples and Hyperion (As the ship could not bring its full broadside to bear upon Argus Panoples, I might have concentrated its fire upon Hyperion, but the decision to split the two seemed reasonable.) Both Kiivar ships took further damage.  By now, Admiral Wu Bai's flagship was in no better shape than the lead Ra'esharn vessel. At the rear of the Kiivar line, the hitherto untouched Tethys came in for a battering, taking five hits in less than ten minutes.

To bring the forward battery of Polyphemus into action, Admiral Wu Bai signalled a further starboard course change, still in line astern. Once again Akem Manah had to split its fire,  but its gunnery was equal to the challenge as the range shortened still further. Taking nine hits, Akem Manah registered eight of its own, six aboard Polyphemus, and two more upon Argus Panoples. It was all too much for the Ra'esharn vessel, however.  Twenty four hits were far more than the ship could endure. Capsizing and turning turtle she disappeared beneath the waves.
This success flattered to deceive.  True, the Ra'esharn ship was the first to succumb, but the fact was that all Kiivar ships had taken fearful damage, and were themselves not far from sinking.
Sure enough, as the Ra'esharn line drew into a course parallel with the Kiivar, the range extended slightly.  Both sides' gunnery was proving lethally accurate.  Whilst still engaged in their successive turn to westward, Argus Panoples and Tethys were sunk in quick succession.
Polyphemus and Hyperion didn't last much longer. Though badly battered itself, Aeshma brought the range down and slammed in 9 hits upon Polyphemus. The lead  Kiivar ship blew up and sank at once.  Hyperion lasted no longer, overcome in an unequal gunnery duel with Agra Mainya.

There ended the action, with the total destruction of the Kiivar battle squadron, for the loss of one Ra'esharn capital ship.  This was a devastating loss to the Republican Kiivar Navy - four of eight capital ships gone in a trice.  For all that the Ra'esharn propaganda machine crowed over the victory, the price had been a high one: the loss of one of its own monster ships, and the two others would require months - over a year for one of them - in the repair docks. 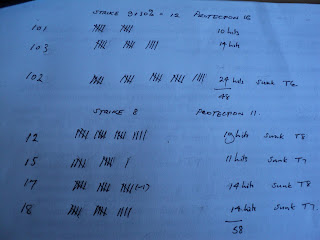 The above is the log of hits received by all vessels.  Both Akem Manah and Polyphemus took 8 more hits than would be required to sink them, but that is the nature of the salvo system.  Actually, at the end of the action, I did consider before she sank of splitting the fire of Argus Panoples, as it was clear that the forward battery fire should probably be enough to sink the lead Ra'esharn ship.  That might have made a difference, too.  But at the time it seemed to me a bit cheesy to do that.  Something to think about.

Posted by Archduke Piccolo at 11:29 PM