What I intended to include in my previous posting, but had no room for, is the topic of this one. We'll start with armoured cars.  I have a certain fondness for this type of vehicle.

The above lot comprise: 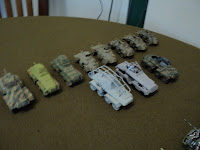 Back in c.1976, I bought 3 of those Airfix Armoured Car kits, not realising that the split mudguards were not historical. At the time it was my practice to buy 3 of anything, to form them into troops or squadrons. For these vehicles I quite liked the idea of a recon vehicle that could handle itself in a fight, but I think there I understood - probably wrongly - that one of the functions of recon units was to seize (note that I don't say 'carry') and hold ground. 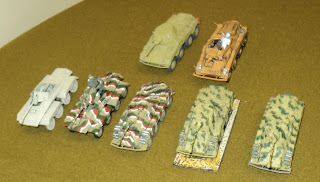 The next batch feature the later armoured cars. Now, finding that the Airfix model was unhistorical, I had pretty much decided to use them for other things. Meanwhile I had acquired 3 more, somehow.  So, one was in effect destroyed - regrettably - in an attempt to make it into a Russian BA64. Again, I had very little information to go on at the time. Another was built into the SdKfz231 seen earlier, one set aside to build a 233, and one more made into the command vehicle.

What of the remaining two? I decided that it was a pity these vehicles were to be abused into other forms, as, though faulty, I rather liked them as they were. They have been repaired and refurbished into their original form, one of them painted with that spectacular hi-viz 'camouflage'. I admit that camo design was somewhat experimental, and probably unhistorical, even as an impressionistic rendition, but I think it looks pretty. Which is why one of my 4 SdKfz234/2 Pumas got the similar livery.

The rest of the front row is two more Puma, and there is one more in the back. That one's slightly larger scale matches the SdKfz234/3 alongside it.

The next couple of pics is of my German cavalry. Most of these are 20mm metals that I bought second-hand, mainly as nice things to have, but the price was very reasonable. The finish is 'as received'. I saw no reason to modify it in any way. 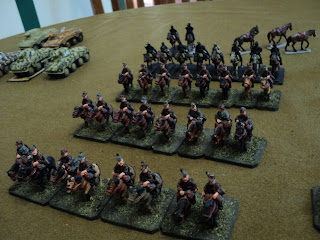 The above are my basic cavalry units - squadrons or battalions. The fourth row is made up of mounted figures from the Revell German artillery box. A few plastics have been added to form a fourth unit. In the rear those stray horses might fetch up as pack or draught animals. 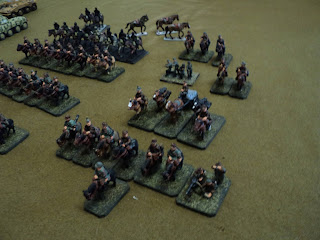 And this lot are my support weapons (MGs, Panzerschreck, with infantry guns and anti-tank guns to be added), and logistic support. Altogether it's a fine little formation, but I never really settled upon an organisation. In Command Decision terms, they represent about half a Division.

I really must knock together a scenario for these fellows...
Posted by Archduke Piccolo at 6:47 PM