The growing colony of New Azeitona - a provisional name for a nascent settlement - had extended in a few months to a small scattered township some ten miles (sixteen kilometres) south of the main town of Vertiginous.  There was rich farmlands upon the coastal strip between ocean and jungle, and a fine little harbour. But the settlement here infringed rather upon the conditions set by the Great Chief Barra Kuta in the wake of the Limpopo River Trail battle that stopped the Azeitonian expedition into the continental interior. These conditions permitted a ten mile colonial expansion, sure enough, but the sprawling settlement of Oportonovo considerably overstretched that limit. 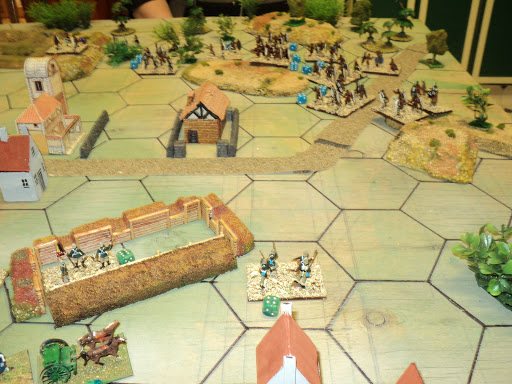 Standing upon his rights as sovereign over these lands, the Great Chief issued an ultimatum that the Azeitonian Governor, Tenente-Coronel Joao Pablo Relaxado, chose to ignore. It was not long before the Great Chief of the m'Butu had gathered together a war band with which to enforce his will upon these troublesome interlopers. 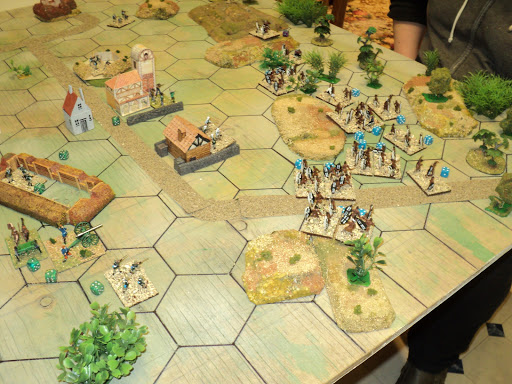 Of course, the Colonel did not ignore the likelihood of such a move, and hastened to build up some king of defence for the place - not easy for such a spread of houses and buildings. A couple of blockhouses had been constructed towards the south end of the township, and a stockage remained in use near the beach from the earliest settlement of the place. The only buildings of substance and size were the church and the administrative block along the main street. For the rest, houses were scattered about over a considerable distance. 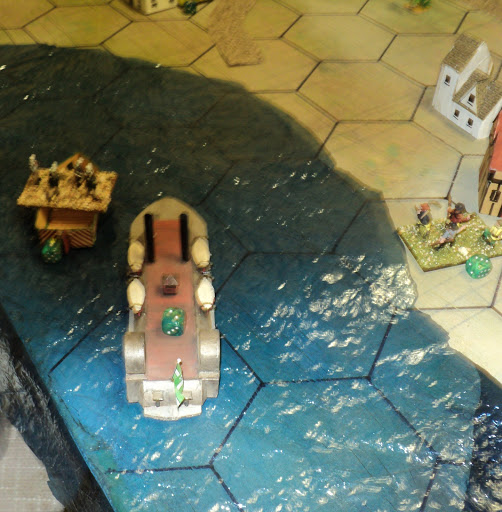 The garrison begins the action scattered about the settlement, including 1 rifle unit aboard Lafayette, with the barge alongside. 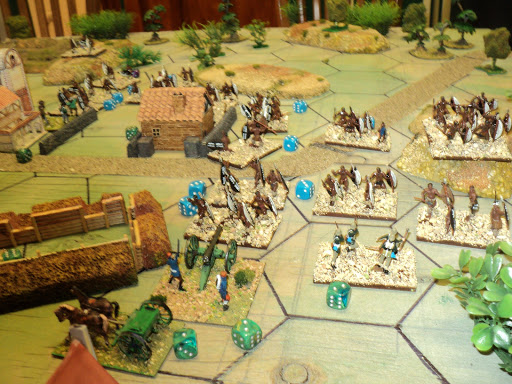 As usual, the m'Butu army disdained sophistication, and relied on their celerity of movement and hitting power up close and personal.

Of the buildings in the town, only the vaguely ecclesiastical edifice and the brownstone admin block could count as strong points. The remaining buildings represented scattered houses, afforded no cover or concealment in themselves, but did block line of sight (not that it affected the spear armed natives in any way!).
Once again this was played of a Tuesday evening 4 weeks ago, with Paul 'Jacko' Jackson having choice of sides.  In the previous encounter between these forces, he chose the Azeitonians. This time he chose the m'Butu. He could bring his forces onto the table anywhere along the jungle side of the table, and/or up to half way down the right hand end as seen from the pictures. He chose to concentrate his whole force in that corner. 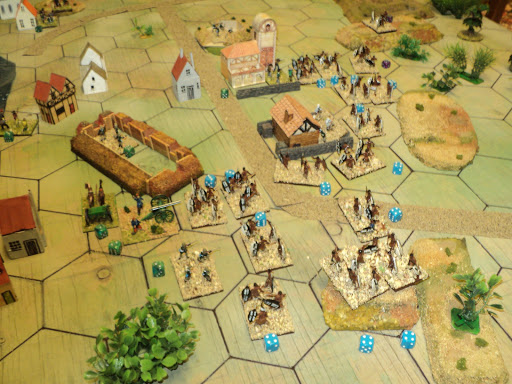 The tale is soon told.  Hordes of m'Butu came surging into the north west end of the town, to be met only by scattered units from the garrison and some civilian bands. Ungarrisoned to begin with, the stockade was to remain worryingly empty whilst the gun battery and a single company stood off the attack from four war bands. The admin block and church grounds were barely occupied betimes before the spear-armed m'Butu were surging up to their walls and battering at the doors. 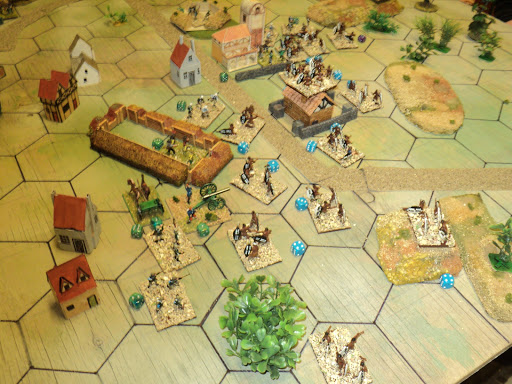 Hastily, the company of infantry was called up from the gunboat (itself lacking targets for the moment), as were several civilian bands. The companies manning the blockhouses at the south end of the township soon abandoned their positions to counter attack the flank of the assailants at the church. This was the flank upon which the great Chief had placed his musket men, who were to give a very fair account of themselves in the ensuing firefight with the Azeitonian regulars. 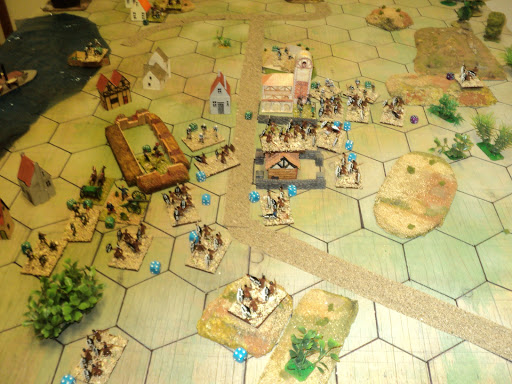 Tending to bunch up into irregular columns to begin with, the m'Butu took some heavy early losses, but this was offset by the piecemeal entry into the fight of the colonial forces. The mountain guns were soon overrun and the supporting companies forced back to the houses close by the beach. Fortunately a band of armed settlers had entered the stockade and were lining the earthworks at the north end. 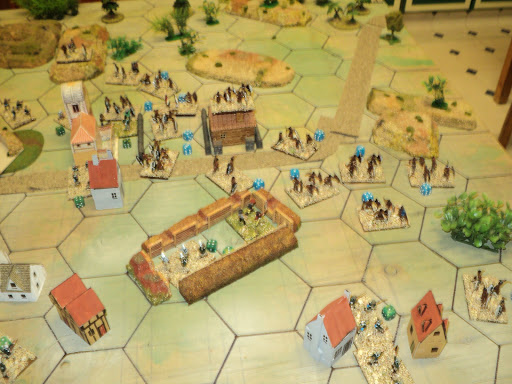 The attackers also broke into the administration block and put the garrison to the spear. But the settlers defending the church were hanging on still against the native hordes, helped by the regulars counter-attacking from the southern flank. Having overrun the colonist line close by the stockade, several war bands surged on towards the houses near the beach, to which the surviving riflemen and their commander, had fallen back. 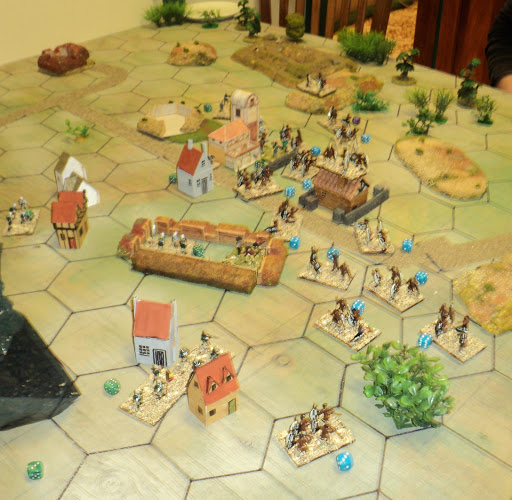 They did not remain there long, and nor did the settlers in the stockade. Taking heavy losses the settlers abandoned their earthworks and scattered. The remainder of the garrison could count themselves lucky the m'Butu declined to enter the place. The assailants soon evicted the defenders from the beach houses as well. 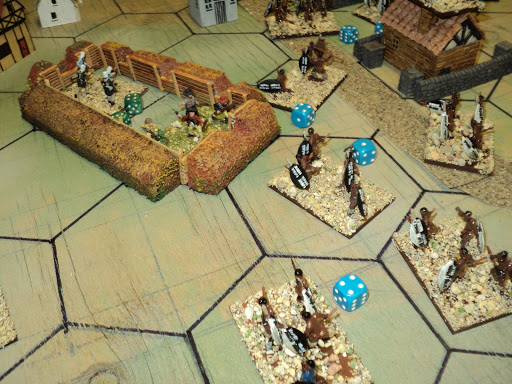 Just when it seemed that the m'Butu attackers would overrun the entire settlement, the impetus of the attack suddenly faded away. Having reached their exhaustion point, only ongoing close combats about the church - still grimly holding on against huge odds - remained to be fought out, along with the popping firefight on the south flank.  Although the natives reached their exhaustion point first, they were quickly followed by the colonists. The battle was over. 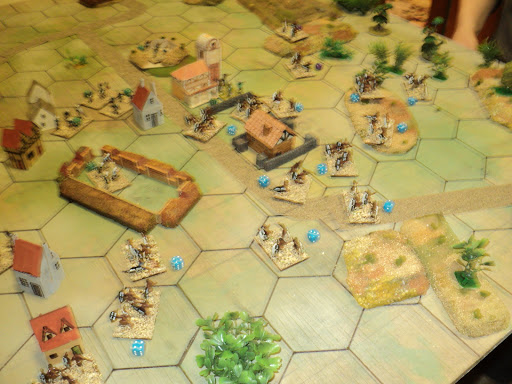 There was no question but that the Azeitonian colonists had received a bad scare. Before fading back into the jungle, the m'Butu had overrun almost half the settlement, and who knew what might have been the outcome had they succeeded in breaking into the church? However, the survivors were rather inclined to view the result as victory, however high the actual cost. For his part, the Great Chief figured he had made his point, and was inclined there to let the matter rest. Whether he was right to do so remained to be seen...
This whole scenario was based very loosely upon the attack upon Kororareka, New Zealand, 11 March 1845, in which local Maori, taking issue with certain colonial developments they misliked, chased the settlers and the small garrison out of town. The historical engagement was rather smaller scale than that implied by the Oportonovo action.  Methought it would make a fine 'disguised' scenario.
Posted by Archduke Piccolo at 5:00 PM